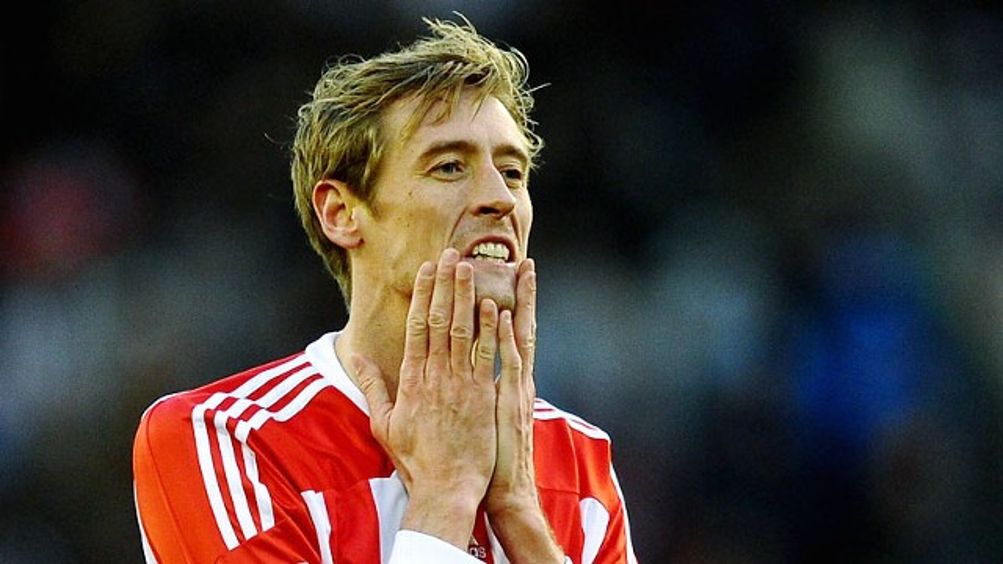 Because he looks ridiculous, is a streaky player, has pixie cheekbones despite being 6-foot-7, reads as “posh” and “soft” in a sport that complicatedly worships killers with no nerves in their knuckles, has a sense of humor, is married to a woman who is noticeably hotter than he is, and tends to be photographed in the process of transforming himself into comedic aerial hieroglyphs — e.g., this, and this and this — Peter Crouch gets a bad rap. Or maybe it would be more accurate to say that Peter Crouch is not often judged with the benefit of nuance. Stoke City’s gangliest forward is a very good finesse player who is not quite a great finesse player, and because he’s nine inches taller than the average striker with his skill profile, the distance between “great” and “very good” turns out to be roughly the distance between “respectable member of civilization” and “weirdo sadface parking-lot carnival clown.”

People make fun of Peter Crouch. A lot of people. Q. What would Peter Crouch be if he wasn’t a footballer? A. A virgin1. Memes yuk around in his wake. There’s probably no player in soccer whose inherent snark-friendliness has had more of an effect on the way his game is regarded.2 Every now and again, he’ll do something amazing on the pitch, and writers will pop up to point out how underrated he is. For the most part, though, he’s just good enough to draw attention to himself, not quite good enough to shut anybody up. He’ll get called up for England, and fans will say he doesn’t deserve a spot on the team.3 Then he’ll score five goals in three games, and fans will say he got lucky. Then he’ll score 18 goals in his first 17 starts, and fans will say he only scores against weak teams. (Like, what kind of loser gets a hat trick against Jamaica?) Then some pundit will concoct specific fantasy-recipe reasons why he shouldn’t start, for instance by decreeing that Emile Heskey’s strong-target-man qualities make him a better link-up partner for Wayne Rooney, and fans will repeat this, even though Crouch scores international goals at a far higher rate than Rooney (22 in 42 vs. 28 in 73, and Rooney averages more minutes in his appearances), and even though playing Emile Heskey in the World Cup makes roughly as much sense as trying to sail him in the America’s Cup competition.4 Call me crazy, but if Crouch were 5-foot-10 and stout of thigh, I’m not sure his country would be so inventive about gonging him off the pitch.

Well, last Saturday, Crouch did something amazing, coming out of the relative nowhere of the Stoke City front line to score what was arguably the goal of the Premier League season — against Manchester City, no less:

So allow me the obligatory moment to point this out: Peter Crouch is really, really underrated. Throughout his career, he’s been consistently underestimated, not only by fans but also by his own managers. It’s as if, because he looks like Kevin Durant being possessed by the spirit of Princess Diana, no one quite believes that his contributions are real; there must be some other explanation for whatever he does. Or maybe because what he looks like he should be good at (standing stock-still in front of the goal and heading in 90-degree crosses) isn’t what he’s actually good at (playmaking; complexly unhinging his own skeleton in order to strike the ball), managers see deploying him as a puzzle they can’t quite solve. Either way, his career has followed the trajectory of his England experience — success followed by embarrassed extenuation followed by lolcats.

Consider the 2006-07 season. That year, Crouch led Liverpool in scoring with 18 goals. He also finished with nine assists, just one behind inspirational club talisman™ Steven Gerrard, who started 17 more games than Crouch did. Liverpool finished third in the Premier League, a then-unsatisfactory result that looks positively idyllic now. So that’s not a bad year, right? Being the leading scorer on a Champions League-bound title contender? But it was partly Liverpool manager Rafa Benitez’s reluctance to rely on Crouch that led Liverpool to buy Fernando Torres from Atlético Madrid during the summer transfer window.5 In 2007-08, Crouch was relegated to the bench for long stretches, never given enough playing time to establish a run of form, and never given the chance to gel with Torres. He still finished tied for third on the team with 11 goals. Liverpool, after reformulating its entire attack around the brilliance of Torres, finished fourth in the league. The year after that, Crouch was sold to Portsmouth.

The golazo against Man City does a surprisingly good job of illustrating Crouch’s strengths and weaknesses. The ball comes flying down toward him about four yards outside the area (he’s got an instinct for positioning), and because he’s unmarked (he’s relatively easy to muscle out of position) he’s able to control it with a weird Russian-folk-dance flick-step (he has a deft first touch and oddly bendable limbs) and he then realizes (he’s creative) that he has a high angle over the goalkeeper, so he connects with a roundhouse volley (he has very good technique) before the ball can touch the ground, and the shot takes a lucky dip (he’s a little erratic) over Joe Hart and slides in under the crossbar. He’s not exactly a target man, he’s not exactly a goal poacher, and he’s definitely not a do-everything center forward who can drop back and run at the defense. He’s unique, which makes him confounding in a traditional lineup, but his game has enough limitations that it’s not quite obvious how to build a team around him. And yet good things tend to happen when he plays. So he ends up either battling away at smaller clubs like Portsmouth and Stoke, or getting uneven minutes at bigger clubs like Tottenham and Liverpool.

He’s an innovative player, only the territory he’s mapped out is a no-man’s-land where aesthetic problems collapse into tactical problems. The fact that he’s built a career out of mining this terrain is a testament to how skilled he is at what he’s skilled at.

I have a not-particularly-well-worked-out theory that Crouch is a sort of subliminal scapegoat figure for the decline of England as an international soccer power. The 2006 World Cup was the last moment when there was genuine optimism around the England team. A lot of that optimism was centered around Wayne Rooney, a player who, for all his skill, doesn’t really challenge English soccer’s traditional ideal of toughness. (He looks like a bulldog, he smokes, he has a temper, he poses hysterically screaming in cruciform St. George’s-cross-body-paint photos that make him look as if he has just feasted on the blood of Frenchmen, etc.) Then, just before the tournament kicked off, Rooney broke his metatarsal and had to miss the first two games. Crouch filled in for him. When Rooney came back, Michael Owen blew out his knee, and Crouch had to fill in for him. It seemed as if, at every turn, England’s brave strikers were being struck down, and the nation’s dwindling hopes were shunted onto the incongruously thin and indeed vaguely girlish shoulders of Peter Crouch, who danced like a goofball robot and also ate nachos like one. It wasn’t Crouch’s fault that England didn’t win the World Cup; they wouldn’t have won with Pele at striker that year. But it’s natural, though not remotely fair, that he’s always been covertly blamed for it.

Even if you don’t buy the England’s-resentment idea, Crouch still poses a fascinating aesthetic problem. Soccer, arguably more than any other team sport, emphasizes the contrasts in players’ individual styles. The best players, particularly the best attacking players, also tend to be the ones who make the game look cool. Think of Messi’s smoothness, Maradona’s fearlessness, Zidane’s toying with space.6 Crouch, by contrast, makes soccer look elbowy and uncomfortable and hilarious. So what does it say that he still gets results? What does it mean for our very serious game if someone can succeed who looks so silly playing it?