Editor’s note: This article appears in the May 8 issue of ESPN The Magazine.

Because the Internet allows people to keep track of these things, a Web site called extinctanimal.com lists every beast that ever ceased to be. There are prehistoric birds, fish, amphibians, you name it. Clicking on the mammals page, I found more than I could ever imagine: the Southeastern pocket gopher, the Cuban spider monkey, the Malagasy dwarf hippopotamus, even the Puerto Rican plate-toothed mouse. Strangely, though, one mammal was missing: the exciting heavyweight boxer.

By my calculations, this species disappeared on June 21, 2003, after a slugfest between Vitali Klitschko and champ Lennox Lewis left the loser (Klitschko) with a 60-stitch gash and a beaten-up Lewis deciding, “Screw this; I’m too rich for this crap.” Three lackluster fights later, Vitali joined him in retirement and left the division for his downtrodden brother, Wladimir, who changed the spelling of his name (from Vladimir) to confuse everyone into thinking he was someone else. Too bad Jeremy Giambi never thought of that. 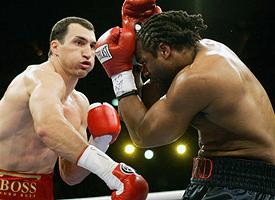 Anyway, the ploy worked. Vlad/Wlad just obliterated Chris Byrd to capture the IBF belt. It was like watching Glass Joe become the champ in “Mike Tyson’s Punch-Out.” We could say, “That’s boxing, there’s too many belts, this stuff happens.” But the WBC belt belongs to Hasim Rahman, a journeyman who fought on the cable show “Ballroom Boxing” two summers ago. The WBO belt belongs to somebody named Sergei Liakhovich, who’s almost as obscure as the WBO itself. And the WBA belt belongs to clumsy seven-footer Nikolay Valuev, who looks like Ivan Drago, if Drago were accidentally exposed to a nuclear reactor leak. No wonder Evander Holyfield and Rocky Balboa keep coming back.

Take it from someone who’s watched Vlad/Wlad, Rahman, Liakhovich and Mutant Drago win or defend their titles: The best word to describe the heavyweight division right now is “desolate.” The enormous Valuev (absolutely the most disarming sports oddity since Gheorghe Muresan) defeated John Ruiz in a gawky clinchfest that cemented Ruiz’s status as the most excruciating athlete to watch in the history of sports. I’d rather fight Ruiz myself than look at another of his bouts. At least he’d knock me unconscious so I wouldn’t have to remember anything I saw.

Even that debacle was more entertaining than Rahman’s recent draw with James Toney. Once a middleweight champ at 160 pounds, Toney apparently hired Kirstie Alley as his trainer, battling Rahman at a flabbergasting 237. (He’s 5’9″.) We haven’t seen boobs bounce like that on HBO since “G-String Divas.” Rahman’s body punches practically disappeared into Toney’s blubbery stomach, like he was the matrix or something. For a while, HBO’s Jim Lampley gamely pretended Toney was carrying the extra weight for a competitive advantage. But he gave up the charade when a gasping Toney sagged against the ropes in the later rounds, then revealed in Round 12: “Those close to Toney say he has an eating disorder; the man cannot stop eating.”

Thanks for warning us, Jimbo. You owe me an hour of my life back. But what does it say about Rahman, who couldn’t knock out an obese dude? This fight would have been a complete waste of time if Toney hadn’t tried to eat Larry Merchant in the postfight interview.

Two weeks later, Lamon Brewster lost his belt to Liakhovich in Cleveland. (Sad subplot: Instead of Vegas and Atlantic City, they now hold heavyweight title bouts in Cleveland. Hartford, you’re on deck!) This wasn’t a bad fight, and I remember thinking afterward, “Wow, Liakhovich is pretty good!” Then we learned Brewster had suffered a detached retina in Round 1 and nearly won anyway. Not a good sign for Sergei’s long-term prospects, unless his promoter can continue to find opponents with double vision. 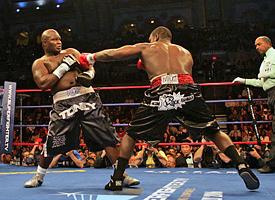 Even visually impaired, Brewster remains more dangerous than Byrd, the IBF champ for 40 incredible months before losing to Vlad/Wlad in a fight more one-sided than Washington-Tomjanovich. Byrd was once the Bruce Bowen of heavyweights (all defense, no offense), at least until Bowen developed three-point range. Heading into Klitschko-Byrd II (there was a Klitschko-Byrd I?), Lampley argued that many heavyweights ducked Byrd because of his unorthodox style. They used to say the same about Ruiz. It’s a nice way of saying, “He sucks to watch.” (Like describing a boxer as a “young 35” is a nice way of letting us know he spent his 20s in prison.) Byrd turned out to be a dreadlocked punching bag for Vlad/Wlad, who, by the way, looks unstoppable when nobody hits him back. Through it all, Byrd’s overbearing wife screamed instructions from his corner. The poor guy wasn’t just whipped; he was whipped.

Here’s the crazy thing: The fight aired from Germany at 5 p.m., which wasn’t just significant because it forced HBO to make the agonizing decision to preempt “Just One of the Guys.” A Saturday afternoon fight for the heavyweight title? How far can this division fall? Even Michael Buffer looked mortified during the introductions, like he’d accepted 50 grand to announce at a bar mitzvah and was praying nobody would find out. Meanwhile, Lampley and Merchant continue to grow crustier than Billy Bob in “Bad Santa.” You can almost imagine a depressed Lamps staying up until the wee hours every night, watching old tapes of his Tyson calls, remembering the glory days as he sobs into a glass of pinot noir. At one point, when HBO judge Harold Lederman argued that Klitschko was holding Byrd, Lampley berated him before announcing the final knockdown.

Look, everyone is on edge. How else could we feel as we watch the heavyweight division slowly waste away? I’d love to tell you there’s a savior on the horizon — really, I would — but that’s not the case. Last year, Samuel Peter had us all excited because of his punching power (prodigious) and nickname (the Nigerian Nightmare, shamelessly stolen from Christian Okoye). Then he punched himself out in two rounds against Vlad/Wlad, spent the next few sucking air and the last few as a legitimate threat to puke in the ring. So much for the Nigerian Nightmare. In the heavyweight division, even the potential saviors stink.

What does the future hold? Three of the four belts are held by methodical Eastern Europeans, and a Kazak named Oleg Maskaev seems poised to take Rahman’s belt. Not since the days of “Red Dawn” has America been under a Cold War attack of this magnitude, and this time around, we don’t have Patrick Swayze and C. Thomas Howell to save us. The bigger problem is Americans rarely take up boxing anymore. As crazy as it sounds, the thought of getting punched in the head for 15 to 20 years, turning most of your money over to the IRS and Don King, then battling health issues without insurance for the rest of your life doesn’t sound appealing. Plus, back in the days of Dempsey, Louis, Ali, even Tyson, the heavyweight belt meant something. That’s not the case anymore. If you’re a big dude who enjoys beating up other big dudes, you’re better off drifting toward better-organized and more respectable sports, like K-1, Pride or Ultimate Fighting.

And so we bid goodbye to the mammal known as the exciting heavyweight boxer. Which leads me to an idea for Klitschko’s first title defense: He should challenge the Malagasy dwarf hippopotamus. I’m pretty sure that, like Chris Byrd, the hippo won’t hit back.