We begin Part 3 with Bill addressing Malcolm’s question about how to fix the NBA draft.

Now you’re just lobbing me softballs. I am a fervent “Every lottery team should have the same odds” believer for two reasons: Not only would it eliminate any incentive to tank down the stretch for a “better” draft pick (really, better odds at a better draft pick), but the current setup penalizes potential franchise players by giving them too much responsibility for carrying inferior teams. A borderline lottery team defied the odds three times: In 1993 with Orlando (the Magic reach the NBA Finals two years later); in 1997 with San Antonio (the Spurs bottom out only because of Robinson’s injury, land Tim Duncan, then win the title two years later) and in 2008 with Chicago (the Bulls land Rose, turn into a fringe contender, then give us the best first-round series ever). Was it a bad thing that we turned a half-decent young team into a contender? Did anyone not like how this turned out? 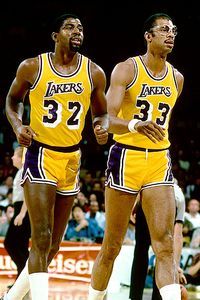 The bigger issue (you already hinted at it): Of all the professional sports, parity hurts the NBA the most. Ideally, you want a league with a distinct upper class and a distinct lower class. The most competitive and fan-friendly stretch in NBA history (1984-93) featured an unapologetic separation between the “haves” and the “have-nots.” The strong fed on the weak. For instance, the Showtime Lakers (1979-91) featured THREE foundation guys picked No. 1 overall (Kareem, Worthy and Magic), as well as a former MVP and three-time scoring champ (Bob McAdoo), a No. 4 overall pick (Byron Scott), another No. 1 overall (Mychal Thompson), and other heavy hitters acquired through guile and the stupidity of other teams. Well, the majority of teams aren’t as stupid anymore. (Apologies to Chris Wallace.) You can’t reload as easily by just stealing someone’s best player for nothing. (Again, apologies to Chris Wallace.) So once a contender starts fading, how do they stop the slide?

Look at poor Phoenix, which won 46 games in 2008-09 and barely missed the playoffs. If the Suns had the same odds as everyone else to land Blake Griffin in June, and they did, wouldn’t this be good for the league? They’d be an instant contender again! On the flip side, say Griffin goes to the team with the best odds to land him: an awful Sacramento team. Now he’s playing with one quality guy (Kevin Martin), two young guys with potential (Spencer Hawes and Jason Thompson), a bunch of overpaid stiffs and a new coach who might or might not be good. What does he learn for the next three seasons? How to lose. That’s it. Why is that a good thing? And as you mentioned, why should we keep rewarding franchises that are COMPLETELY INCOMPETENT AND DON’T GIVE A CRAP ABOUT THEIR FANS — namely, the Clippers, Grizzlies, T-Wolves, Warriors and Bucks, among others — by giving them the best shot at franchise-changing players? Similarly limited teams, such as Indiana or New Jersey, did a better job putting a decent team together and entertaining their fans … and they get penalized with inferior lottery odds? That’s what I don’t get. I would rather see the dregs remain the dregs.

I am currently paying for season tickets to the hopeless Clippers, who deliberately antagonize their fan base with decisions like, “We’re going to bring Mike Dunleavy back for a seventh season even though he has the first-ever 0 percent NBA approval rate from our fans.” They wouldn’t have season-ticket holders if not for the slim hope that one of their annual high lottery picks might land them the next LeBron or Durant. Remove that potential and fans would flee … which means the Clippers would either croak as a viable franchise or remain appallingly incompetent forever. Again, are either of those scenarios bad? To have a season with seven or eight loaded playoff teams, don’t we need a few horrific teams? (Note: I spelled out the numbers in this 2007 column about the dangers of tanking.) These were my two favorite NBA postseasons from a competitive/entertainment standpoint since my freshman year in college: 1993 and 1988. Notice all the crummy teams? It’s not a coincidence. It shouldn’t take someone as talented and important as Jordan or LeBron six solid years to finally play with a decent supporting cast. That’s why we can’t keep rewarding lower classes at the expense of the elite franchises. And if this makes me an NBA Republican, so be it.

Or how about eliminating the draft altogether? I’m at least half-serious here. Think about it. Suppose we let every college player apply for and receive job offers in the same way that, oh, every other human being on the planet does. That doesn’t mean that everyone goes to L.A. and New York, because you still have the constraints of the cap. It does mean, though, that both players and teams would have to make an affirmative case for each other’s services. So you trade for Steve Nash or Jason Kidd, because they make you instantly attractive to every mobile big man coming out of college. Instead of asking the boring question — which team is going to be lucky enough to draft Derrick Rose? — we ask the far more interesting question: Which team, out of every team in the league, should Derrick Rose play for? Or suppose you’re the T-Wolves, and you’ve been a doormat for years. You could say, “From now on we’re a clean-living, Christian organization. We have prayer meetings before every game. We are home by 11. We never do drugs.” Then you’d have the inside track on every clean-living college basketball player in the country. Are there enough quality religious players out there to win a championship? There must be! (By the way, why has no one ever put together the all-time clean-living starting five? And how great a name for a franchise is the “Minnesota Christians?”)

The bigger point here is that what consistently drives me crazy about big-time sports is the assumption that sports occupy their own special universe, in which the normal rules of the marketplace and human psychology don’t apply. That’s how you get the idea of a reverse-order draft, which violates every known rule of human behavior.

Here’s another example: We now have pretty good epidemiological evidence that the long-term health consequences of playing in the National Football League are considerable. The life expectancy for former NFL players is 20 years lower than it is for the general public. Part of that is due to the type of person that plays football. But a big part of that is also due to the consequences of playing football: concussions, and the raft of health issues that come with being obese, which — let’s face it — the NFL basically requires most players to be. This is the kind of issue that, say, the companies who ran coal mines dealt with 50 years ago. And yet somehow the NFL — which has a thousand times more resources than coal companies ever did — gets to pretend this problem doesn’t exist. Huh?

Now you’re triggering parts of my brain that I didn’t know even existed. On the NBA draft: The league needs it because it generates nearly as much interest as anything that happens in the actual season. Remember the awful 2006-07 campaign that featured Tankapalooza ’07, the Amare Stoudemire and Boris Diaw suspensions, Tim Donaghy’s Last Stand, the lamest MVP race ever, the best three guys (Kobe, Wade and LeBron) trapped on bad teams, the least competitive Finals ever; and San Antonio playing hard for four months and somehow cruising to a title? The Durant-Oden debate was significantly more interesting than anything else that happened other than the Warriors-Mavs series, LeBron’s 48 Special and the revelation that a crooked referee was working playoff games (only the state of NBA officiating is so horrific that he didn’t stand out). Also, if you eliminated the draft, then my annual draft diary would die, and Chad Ford’s archives wouldn’t be nearly as fun to read. I would miss the draft. Desperately. The easy fix, and the only fix, is to give every lottery team the same odds. Done and done. You also forget that every NBA player wants to live in either Southern California, New York, Phoenix or Florida. So unless you’re prepared to put all 30 teams in those four regions, we can’t dump the draft.

Back to your point about arrogance and sports leagues: Please tell me you’re following the current officiating debacle. The two most-watched regular-season games (both Celtics-Lakers games) were ruined by officials. Game 7 of a classic Boston-Chicago series was ruined by officials. The Mavs’ season was ruined by officials. There doesn’t seem to be any rhyme or reason to flagrant fouls and how they are called, just that the ongoing indecision has compromised the quality of the games. Bill Kennedy had such a heated incident with Doc Rivers in March that both were fined; somehow, Kennedy worked two Boston playoff games (both must-wins on the road). Dallas went 1-14 in its past 15 playoffs games that Danny Crawford officiated; somehow he worked one of their 2009 playoff games (inevitably, a loss for Dallas). Joey Crawford got suspended two years ago for baiting Tim Duncan, then blew last season’s season-ending Spurs call … and somehow, he worked a must-win San Antonio playoff game in 2009. And the number of competent refs is so bad that Violet Palmer worked a Round 2 game last week. For a league that vowed to clean things up post-Donaghy, why haven’t we seen any real results yet?