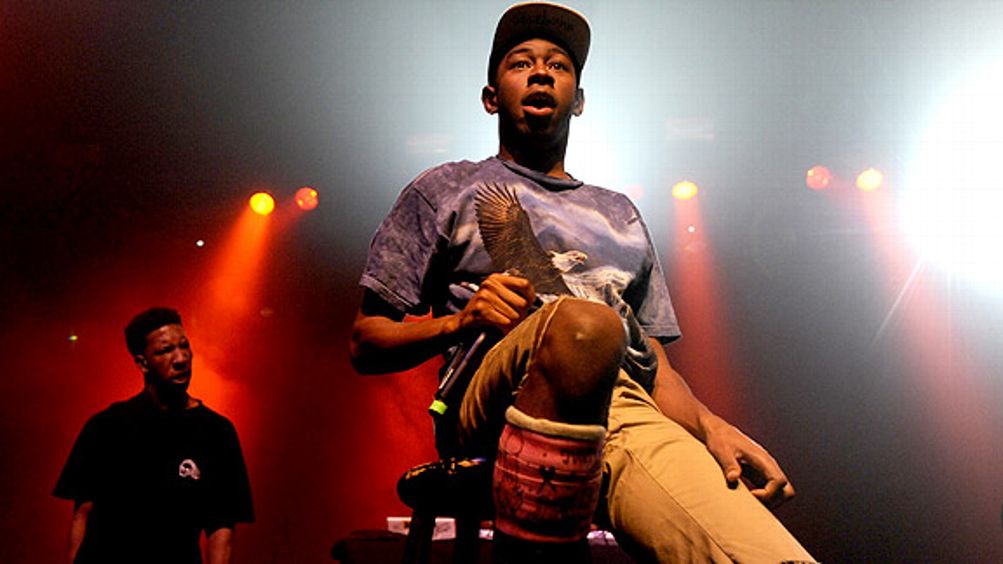 Last week, MTV announced the nominations for the 2011 Video Music Awards. The 2011 VMAs!

At first glance, this year’s show looks a little snoozy. Your water cooler might need a jolt of caffeine, or Kanye, to get the conversation started. Katy Perry has the most nominations: Snooze button. Adele’s “Rolling in the Deep” is a great song, but after rollin’ in a million remixes it’s not time to wake up yet. Bruno Mars: Pass the No-Doz. Even Lady Gaga, I suspect, has run out of outfits (including no outfit) with which to shock us out of our stupor. But despite the lack of anything epic, this year provides a benchmark moment in the history of the show. That’s right, folks: Mark your benches! Look at all of the digital lights (Clear Eyes, Full Clicks, Can’t Lose)! Let us fill the ether with American LOLs and exclamation points!!! The 2011 VMAs are coming, and they will belong to the Internet.(!)

Or more accurately, two Internet creations.1 Both repping the West Coast, L.A., and Oakland, respectively; both just-barely-old-enough-to-drink beers, let alone whatever the frothy milkshake in this video is; both with spunky Tumblrs and ad-hoc videos that took them from zero to VMA in 60 seconds.

“Yonkers” and “Gucci Gucci” are artful reminders that the best knock-off lip-sync videos can’t capture the energy of original artists harmonizing their audio and visuals, enhancing the experience of a great song like a ’60s-era Phil Spector wall of stimulation.

In the case of Tyler’s Wu-Tang-punk neo-negrowave just-don’t-call-it-horrorcore movement, or film-student Natassia’s liberated army of white girls (V-Nasty says: Free the n-word!) we see custom-tailored personalities showing off the maturation of an era in which overnight success isn’t something that happens by twist of fate, but is coordinated and stylized like contrasting lapels on a quirky hipster suit. The granular details matter most. No matter if your live show is a clunky mess or not, the Tumblr and Twitter effect is real.2

Get yourself an A-list tweet (Kanye’s plug of “Yonkers”), or cosign (Drake <3's Kreayshawn) and your road to interrupting Bruno Mars (Bruno, you need to drop that street joint soon, son!) is paved with Likes and embed codes. It's all showtime now, folks. You're either being re-tweeted or not. Being we're on the Internet, here are three takeaways to help run a good campaign: Go There: How to eat a roach intelligently

To eat a roach intelligently: 1. Don’t actually eat the roach.3 2. Realize the risk in eating a roach is not the nausea, but the chance that no one will care. The Yonkers video seems to pose a Devil and Daniel Webster-type query: What would you do for fame and a moon man? Would you eat a Madagascar hissing roach? This is an accessible step if you’re willing to go there. Just don’t do it in Madagascar, where no one can hear you puke.

Similarly, if, like Kreayshawn, you go there with the N-word, make sure people hear. Make sure they hear your discussion of “the issues” as well. And it probably helps to be a mob of young cute ladies from the Bay area. Which leads us to …

A look through the archives of Kreayshawn’s Tumblr reminds us that underneath the fresh-to-death style and spunky attitude is a genuine beauty. And she knows it, taking time to reference her likeness to Madonna in a line, as well as a whole song (“hoes on my d— ’cause I look like Madonna”).

The hot factor also plays for Tyler, who seems to take off his shirt as much as your average model on the runway. In the case of Tyler’s black devil-eyes and Kreayshawn’s Mickey Mouse-meets-Indian-culture style, it’s the beauty that carries you through the “Eww, what’s that?” awkwardness. Without it, you click away.

B-Story Problems: Have something else to talk about

Like we saw with the Wu, having a collective allows you to provide a diverse menu of options. With OFWGKTA, when you get tired of the Tyler main course, you have the delicious New Yorker-sanctioned “Where’s Earl?” narrative, plus appetizers and aperitifs from folks like Mellow Hype (how serendipitous that OF appears in the Kreayshawn video), and fast-rising feature specialist Frank Ocean (finger-kiss, magnifique!). Tyler makes a great reality-show restaurant owner, snarl-blogging updates about the latest OF power moves.

Just as you’re writing off Kreayshawn as ditzy white girl without a clue, she gets the call to direct a Red Hot Chili Peppers video, and you remember that, as a film-school student, she must have some sense of vision and directorial purpose. I guess we’ll find out if she can actually direct, but it might not matter.

Wanting to be a hot shot is something we can all relate to. But the VMAs have become a reasonable, accessible road for anyone to shoot for. This year the most compelling story is to see one of these Internet-buzz artists win. Or even better, lose loudly and gloriously. Run away, VMAs. Run away! Now that we’ve Internet-looped ourselves into oblivion, the next-level post-future move is — wait for it — #LOSING. If you can make MTV kiss the ring with a nomination, then get your fan base all riled up about how the political suits were too scared cause “you be eating roaches” or “using the N-word with cutie-patootie panache.” Then you’re gonna get buzz, traffic, media hits, The Game putting out a battle song with your name in it, plus a tweet from Kanye saying how he respects your indie-art swag. Blocka blocka! That’ll keep your ass out of the Internet underground and your press releases dressed in Gmail’s golden “Important” flags. The rest is gravy.