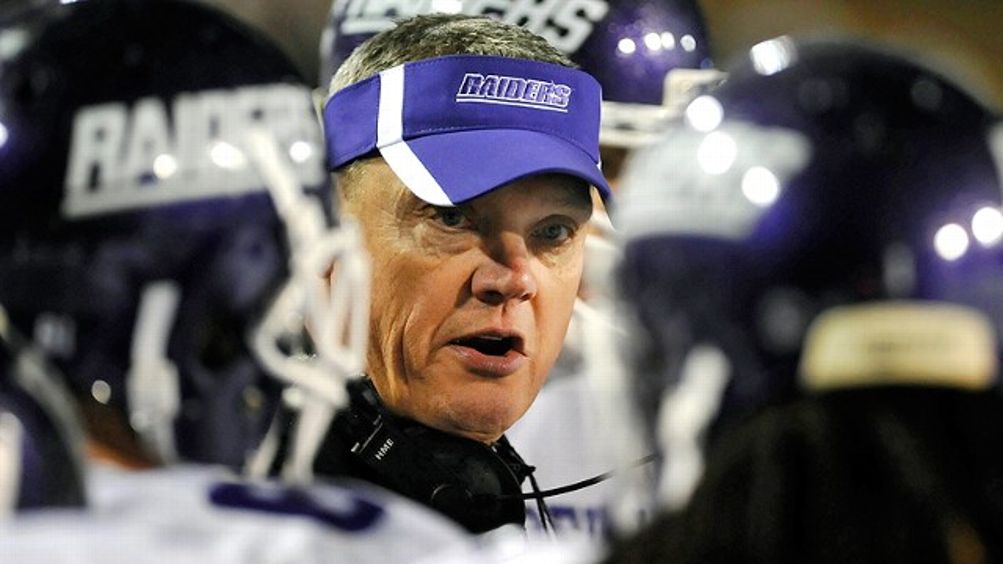 There is nothing especially compelling or dramatic about Larry Kehres, other than that he is the most successful college football coach of all time. He is, according to those who know him well, a stoic and a pragmatist, a man who expresses his displeasure most effectively with a hard stare, a man who wears his hats slung low over his eyes and keeps his reading glasses dangling from a chain around his neck. He has lived in the same airtight geographic region for nearly his entire life; he is married, he has children and grandchildren, he lives a 3-iron’s distance from the football field where he coaches. He decries any comparisons between himself and the cultural icons of the sport — Osborne, Schembechler, Bryant — as utterly incongruous, even though he has won more games and lost fewer games than any of them. When a reporter recently posed a question that framed a potential train of Kehres’s own thought, the coach thanked him for expressing what was in his head better than he ever could.

Last Friday night, at a high school football stadium in Salem, Virginia, Kehres coached the 359th game of his career for the University of Mount Union, a small college located in the small town of Alliance, in Northeast Ohio, a few miles east of the Pro Football Hall of Fame in Canton. Three of those games have ended in ties. Twenty-four were defeats. The vast remainder — 332 — have been victories. Kehres’s winning percentage is .929; no other coach with at least 200 career wins is above .844. That Friday-night game was Mount Union’s eighth straight appearance in the Amos Alonzo Stagg Bowl, the Division III national championship game; it was Mount’s 14th Stagg Bowl appearance in the past 16 years, and it would end with a 28-10 win over St. Thomas of Minnesota, the Purple Raiders’ 11th national championship since 1993. This is almost certainly among the greatest runs of success in the history of American sports, and yet if there is one measure of how high Kehres has driven expectations for this program, it’s that he entered this year’s game thinking he was on the verge of an unprecedented failure.

I could tell you all of this, and it would be undeniably true, just as it’s true that there is no money for scholarships in Division III, just as it’s true that the players who come to Mount have to take out loans and financial aid to pay the school’s roughly $35,000 yearly tuition. I could tell you that Cecil Shorts, who emerged from Mount Union into the NFL as Pierre Garcon did before him, and who now plays wide receiver for the Jacksonville Jaguars, has talked about a portion of his salary going toward student loans.

I could tell you all of this, and it might seem like a quaint antidote to everything we find hypocritical about the concept of amateurism, but it might also diminish what’s been accomplished here. It might make it seem like Mount Union’s success is somehow more facile and simplistic than it actually is, and it might ignore the obvious fact that the Mayberry-esque façade belies a process of continual evolution by a coach who is seemingly always one step ahead of his opponents. Because here is another undeniable truth: Division III football is still college football, cutthroat and highly competitive, and success, even in a small town like Alliance, is still dependent upon the ability to adapt to modernity.

“It’s not until you step out of Mount Union and step into the real world that you realize what he’s done,” says Toledo coach Matt Campbell, who played and coached under Kehres. “Because we never really considered Mount to be the real world.”1 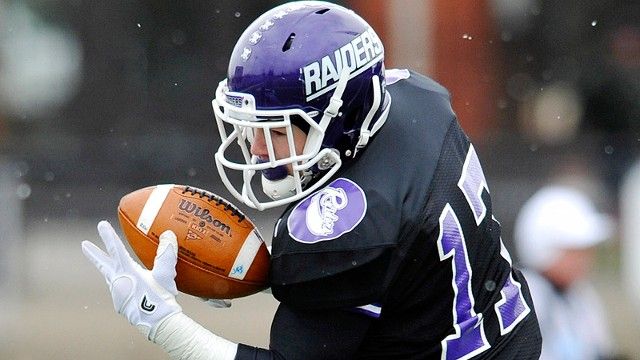 It is not a stretch to say that the past three seasons were the most difficult and disappointing years of Kehres’s head-coaching career. And I should say that it almost feels like an insult to logic and common sense to make this declaration, since Mount Union went 42-3 over those three seasons, and since they reached the Stagg Bowl every year, and since they dominated their league, the Ohio Athletic Conference, so utterly and completely that there were no real challengers. But all of those Stagg Bowl losses came to the same team, to the University of Wisconsin–Whitewater, and while none of those losses were by more than 10 points, it was the first time in a generation that you could legitimately question whether Kehres had finally lost whatever edge he’d had. Those Mount-Whitewater games became a mini–World Series; the teams played each other in the Stagg Bowl seven straight years, and Kehres won three of the first four. Then came this run of defeat and the impending danger that, for the first time since 1992, a class of players would get through college at Mount without winning a single national championship.

The central question about Kehres, of course, centers on that edge he’s maintained, and how he’s maintained it. “Since I’ve left Mount Union, that’s probably the number-one thing I get asked,” says Erik Raeburn, who’s now the head coach at Wabash College in Indiana, and also happens to be Kehres’s nephew. “People want it to be this one secret thing, so they can just copy that. But the reason they’re so successful is that he’s better than all the other coaches at everything. He’s a better strategist, he’s a better recruiter, and he’s a better evaluator of talent. He’s a better teacher. He just sees everything better.”

Some of it is success perpetuating success; Mount is situated in the epicenter of one of the more fertile high school recruiting grounds in the country, and the school’s reputation has extended outward over time, so that they have recruits from Florida and Texas and California on their roster. Division III football is a game for the undersized and the overlooked, and Kehres has a knack for finding players who fit that description; his current quarterback, Burke, once outplayed Ohio State’s Braxton Miller in a state championship game.

But there is also an element of adaptation here: In the early 1990s, the Purple Raiders first found prolific success by throwing the ball relentlessly with a quarterback named Bill Borchert (who actually ran a wing-T, rush-heavy offense in high school). Then they recruited a series of hard-nosed running backs and pounded their way to further success. They do not adhere to any sort of fixed orthodoxy at Mount. The key philosophy Kehres uses, and that at least four people echoed back to me, is PLAYERS, FORMATIONS, PLAYS — one leads to the next, which leads to the next.2

This spring, Kehres saw something in Burke, and so he began studying tapes of the modern spread offense being run by programs like Oregon, where the quarterback is an integral part of the running game and makes reads based on what he sees. He spoke often to Campbell at Toledo, who at the age of 33 coached the Rockets to a successful season in the Mid-American Conference. This was the first year Kehres called plays in his own offense since 2004, and it might have been the best team he ever had on both sides of the ball: They led the country in several major offensive and defensive categories. Through their first seven games, they were outscoring opponents by an average of 55-1. They set multiple statistical records during the D-III playoffs, and blocked punts at key moments for touchdowns in both the semifinal (a game they trailed 28-14 in the second half) and in the final. To summarize: At key moments, they succeeded on offense, defense, and special teams.

“It’s all just subtle changes,” says Vince Kehres. “The one thing he’s talked about is that you problem-solve. You fix potential problems before they become problems.”

As they’ve done in the past, they shifted a couple of key players from offense to defense; one of them, Blair Skilliter, had played running back his entire life and moved to cornerback. “They graciously did it, and they never showed any hard feelings about it,” Larry Kehres says. Skilliter and the other seniors spoke openly about their desire not to become the one class at Mount Union in 20 years that failed to adapt Kehres’s system to its highest level of efficiency. This became their rallying cry, and it became Kehres’s rallying cry, too; he was re-energized, and he was loose enough through the fall that he sometimes danced at practice. After Mount ground out that victory over St. Thomas in Friday night’s Stagg Bowl, Kehres seemed to imply that, at age 63, he’d enjoyed this season as much as any other he’d coached.

And I suppose it is worth noting here that Wisconsin-Whitewater, who had become Mount’s perpetual rival and seemed poised to supplant the Purple Raiders as the standard-bearer for small-college excellence, lost three games and failed to qualify for the playoffs.

And I suppose it is worth noting, too, that Mount Union has not lost three games in a season since 1988.

I don’t know how much longer Kehres can coach and still maintain this edge, and I don’t think anyone else does, either. Retirement is not something he discusses much with his nephew, or even with his own son. “He’s kind of run out of things to prove,” Raeburn says. “He’s the most humble guy I’ve been around, and he’s also the most successful guy I’ve been around.”

Campbell likened his time at Mount Union to working at a think tank; when he visited Mount Union while seeking out a college to play football, he saw 80 non-scholarship players working out on a dusty field on a June day, and he fell immediately in love. “For me,” he says, “it ended up changing my life.”

All this small-town arcana surrounding Mount Union makes for a wonderful little yarn, and perceived from afar, I imagine the Purple Raiders’ success will serve as a perpetual opportunity for sportswriters to wax rhapsodic about the essential purity of sport at its essence and the wonders of never leaving home to chase the big time. (Kehres could have departed to become the head coach at Kent State in the mid-1990s, and from there, maybe he would have filtered into the major-college ranks, but he chose to stay at Mount Union.) I imagine, for as long as Kehres continues to win Stagg Bowls and achieve these unfathomable results, Mount Union will appear to stand outside of the real world. And I imagine, given how much meticulous thought Kehres devotes to constructing every one of his teams, he is happy to have his opponents believe that it is nothing more than an ineffable fairy tale.