We Need a Renegade Basketball League 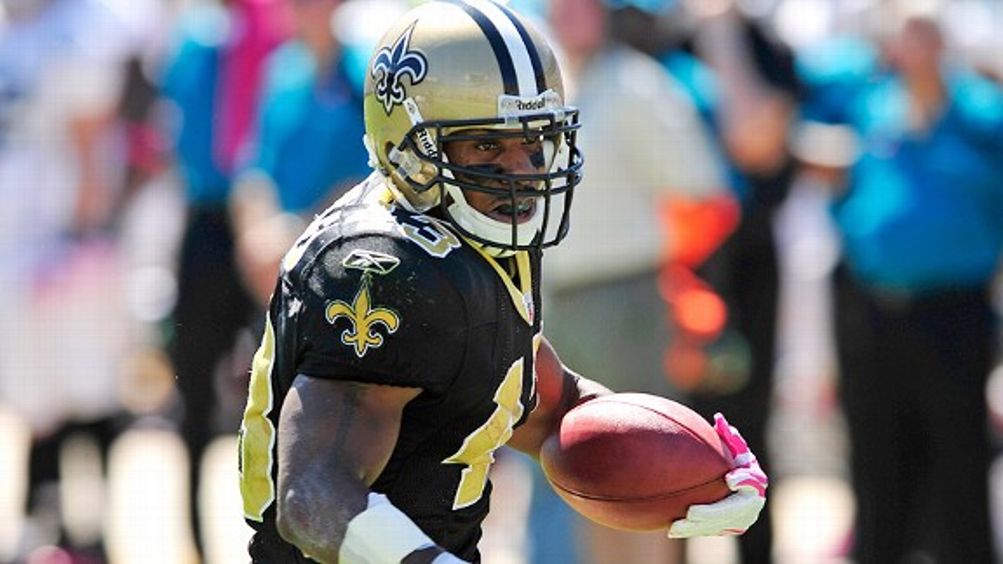 In recent years, the NFL has seen a dramatic rise in the number and quality of skill players who do their damage not just by moving the pile or outrunning defenders, but also by working the flats and soft spots on the football field. These naturally gifted players need just a little bit of open territory to operate, and when they get it they incinerate defenses. They operate in the area between the short dive up the middle and the long bomb down the sideline. They are “space players.”

Scan the list of the NFL’s total yardage leaders and you’ll see their names. Most of them have the title running back — Matt Forte, LeSean McCoy, Jahvid Best, and Ray Rice, to name a few — but there is no one prototype for these players. Indeed, in the same group you’ll also see receivers, most notably Wes Welker of the Patriots, a “slot receiver” who is the undisputed master of the underneath route and the receiver screen (although this year he’s been doing all that and more). An older example is former Pro Bowler Eric Metcalf, who made the rare switch from running back (where he ran for more than 600 yards in two different seasons with the Cleveland Browns) to wide receiver (where he had more than 1,000 yards in 1995 while playing in the Falcons’ run-and-shoot offense), all while returning kicks and punts. But without a doubt, today’s top space player is the New Orleans Saints’ runner/receiver/kick returner/human Molotov cocktail Darren Sproles. Sproles is straight-ahead fast, but he is a great space player because of his other attributes: quickness, lateral agility, a second gear to blow by defenders, and a low center of gravity. Sproles returns kicks for the Saints but, then again, every time he touches the ball it’s like a kick return — he’s in space, and one missed open-field tackle against him might mean a touchdown.

The space player is maybe most easily defined by what he’s not. And ex-Cleveland Brown and Minnesota Viking LeRoy Hoard — a physical, bruising former running back — famously (though perhaps apocryphally) described his running style as the antithesis of the space player: “If you need one yard, I’ll get you three yards. If you need five yards, I’ll get you three yards.” Players like Sproles, on the other hand, just need a glimpse of open field, created either by defensive alignments or the coach’s schemes, and once there they thrive. They are looking for creases between defenders and one-on-one situations against guys unable to cover them.

Saints coach Sean Payton knows how to use space players. Before Sproles, New Orleans had Reggie Bush, whose career has been disappointing given the massive hype with which he entered the NFL. But even though Bush hadn’t developed into the star they hoped he would be, New Orleans wanted to keep him because he was the kind of space player that their system needed. Bush left for the Miami Dolphins during the frenzied fall free-agent season, so the Saints found a new space guy: Darren Sproles.1 The ex-Charger signed within 24 hours of Bush’s departure, on the explicit rationale that Sproles would be the new Bush.

In coaching the Saints, Payton takes advantage of the three best ways to use space players. First are screen passes — plays designed to get the runner into open space, preferably with blockers ahead of him. Second is the space player’s role as an underneath receiver, where he provides an easy option for a quarterback while drawing coverage away from downfield receivers. And, finally, a space player can be a runner on draws and sweeps after the earlier plays have forced the defense to substitute favorable (for the offense) personnel. When the defense adjusts its personnel to cover such screens and quick passes to Sproles, it opens an opportunity for the Saints to run the ball at quicker, pass-concerned defenders.

The New Orleans Saints love screen passes, and for good reason. Since they throw the ball a great deal (Brees led the NFL in pass attempts in two of the past four seasons, and has thrown more passes than any other quarterback through four games this year), defenses focus on the dropback pass game. Depending on their assignments, defenders either charge relentlessly toward the quarterback or turn their backs and run downfield to cover receivers. The screen counters all this aggression. Offensive linemen let the defenders charge past them and then slip out to block for the space player who catches the screen pass. Meanwhile, the defensive backs who followed the receivers downfield will have to reverse course, find the ball carrier, and avoid being blocked.

Almost all NFL teams use this play, known as a “slow screen” to a running back. But the Saints specialize in other screens, too, such as ones to wide receivers and fast screens to running backs. It’s this last play that is relatively unique to the Saints and Sproles.

The concept is simple: Get the speedy guy to the perimeter quickly and with a lead blocker. Sproles scored on this play against the Bears earlier this season. To clear space on the sideline, Payton reduced the split of the outside receiver, Devery Henderson, having him line up to the offensive line. The Bears were in man-to-man coverage, so when Henderson sprinted inside, his defender went with him. New Orleans’ right tackle, Zach Strief, pulled flat along the line to the right. His job was to block the most dangerous defender, who turned out to be Bears safety Craig Steltz, who was assigned to guard Sproles. With Steltz blocked, Sproles’ job became simple: Run a swing route, catch the ball, and run like hell. 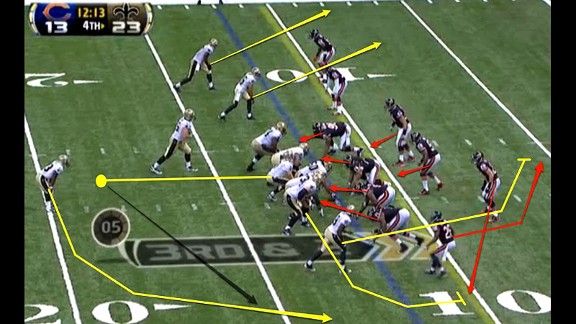 This stuff is elementary. Sproles really benefits the Saints — and Brees in particular — because he adds an extra dimension to their downfield passing game. Brees’ favorite pass play is known as “four verticals,” in which four receivers streak downfield. Although it looks like an all-out deep-pass play, it’s really meant to stretch defensive zones and divide coverage.

If the defense plays with one, two, or three deep safeties, Brees is adept at identifying the open receiver (against a one- or three-deep look with a single safety in the middle, he typically throws to one of the slot receivers, and against two deep safeties, each safety must deal with a two-on-one to his side). But if the defense plays “Cover 4,” or four deep, there are enough defenders to cover each vertical receiver, and that’s when Sproles becomes the go-to option.

Against Cover 4, Sproles can line up in the backfield or as a split receiver in the slot. In either case, with the talent of New Orleans’ wide receivers and the emergence of athletic tight end Jimmy Graham, Sproles is almost guaranteed to be defended by a linebacker as opposed to a speedier defensive back. That is, Sproles should have a mismatch. Payton then has Sproles run an “option route,” in which he chooses between settling in the open space between zone defenders and breaking inside or out against his man-to-man defender. It’s backyard football: Sproles, get open. Given this freedom, there is almost no way for that 250-pound linebacker to defend the nimble Sproles. Moreover, not only is this a surefire completion, but Sproles is so dangerous in space that defenses are also forced to change tactics and commit additional defenders to him, thus opening up those downfield vertical routes. With Sproles, New Orleans’ underneath passes are more likely to result in touchdowns than most teams’ downfield passes.

Finally, maybe the spot where Sproles is the biggest improvement over Bush is as a runner in the backfield. For his career, Sproles averages roughly a full yard per rush attempt more than Bush, and Sproles is averaging a staggering 8.9 yards per carry this season. Of course, those rushes are situational — Pierre Thomas and Mark Ingram tend to handle the short yardage and inside plays — but that’s precisely the point. Sproles is a dynamic space player, and that’s how the Saints use him. The best run play for Sproles is the draw, but they’ve used him in a variety of other runs this season, including toss sweeps and anything else that gets him in open grass.

Sproles is a perfect fit for the New Orleans offense, both because he’s a dynamic player and because Payton recognizes that when it comes to offense, having a variety of good tools for each situation matters more than owning the biggest hammer. Indeed, other than Brees, there don’t need to be any stars on the Saints offense, because everyone gets their chance to succeed in ways that fit their skill sets. From inside runners like Ingram to big receivers like Marques Colston to speedy game-breakers on the outside like Henderson, the Saints offense puts them in situations that allow them to play their best. In 2008, the Saints had more yards and more points than any other offense in the league, and Brees threw for more than 5,000 yards, and yet they had no 1,000-yard rushers or receivers. The Saints are happy to spread the ball around and let it find the playmakers. And when there’s open space, the ball seems to find Darren Sproles — and very often, he finds the end zone.