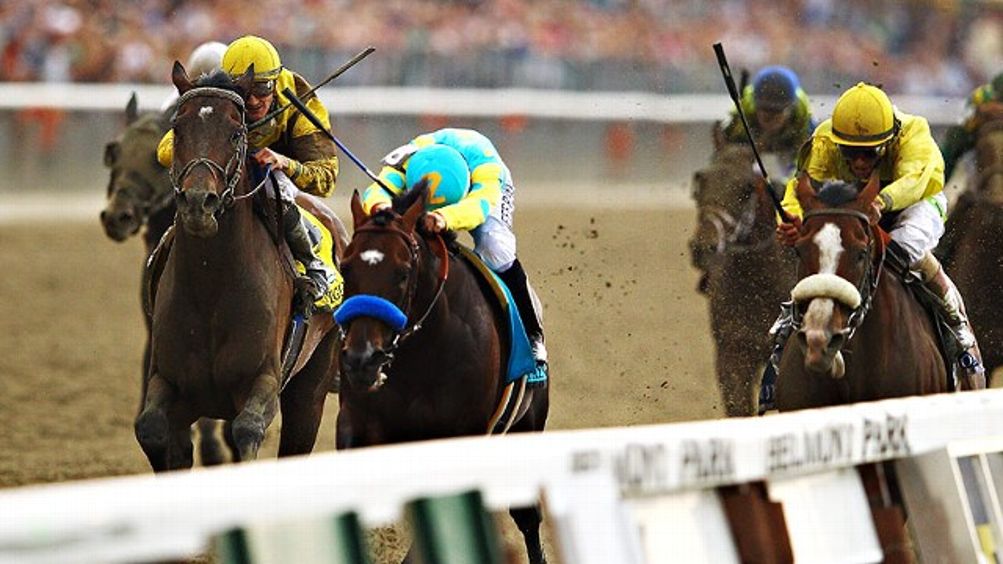 Once history comes up lame, you take whatever you can get. On Friday, I’ll Have Another was scratched from the Belmont Stakes, thereby guaranteeing that horse racing would go a 35th year without a Triple Crown winner, and you could almost feel an entire sport, which wasn’t exactly soaring like a zeppelin in the first place, deflating all at once. About the only thing keeping the discussion lively was a steady undercurrent of suspicion that it wasn’t all tendinitis that was sending I’ll Have Another into early retirement and a premature second career of lucrative mare-humping. Trainer Doug O’Neill was already under suspension and, in response to that, the New York racing panjandrums sequestered the horses in a “security” barn. Suddenly, the Triple Crown contender comes up with an injury and abandons the best chance racing has had in 20 years to get onto SportsCenter before the first commercial break. Race day, then, combined all the best elements of Guys and Dolls as rewritten by Oliver Stone.

Which was not entirely a bad thing. At least people were talking about racing seriously enough to be paranoid about the whole business. If people can care enough about something to see the gunmen on the knoll at the heart of it, there’s got to be some kind of future for it beyond being a shill through which you can rope suckers for your slot palace. And, though it wasn’t as freighted with import as it might have been, the 144th Belmont Stakes was a completely glorious horse race, with Union Rags, the underachiever of the three-year-old season so far, finally living up to the potential that made him everyone’s favorite story before the Kentucky Derby. He is a dark, handsome colt with a compelling backstory, attached, one way or another, not only to thoroughbred racing, but also to the Kennedy White House, and to almost half a century of American art. Union Rags is owned by Phyllis Wyeth, the wife of Jamie — and, therefore, the daughter-in-law of Andrew Wyeth — whom she met while working in the middle of the New Frontier. Phyllis Wyeth bought the horse, sold it once, and then bought it back.

All of this got explored at great length as Union Rags ran splendidly as a two-year-old. This year, however, he finished up the track at the Florida Derby, and then had a terrible trip at Churchill Downs followed by another one in and skipped the Preakness, which got trainer Michael Matz looking sideways at jockey Julien Leparoux. Matz began shopping the horse to other jockeys before settling on John Velazquez, and Velazquez finally managed to get the most out of Union Rags.

Coming down the stretch on Saturday, Velazquez had his horse settled in on the rail against Paynter, the Bob Baffert colt who’d run bravely from the lead over almost the entire mile and a half. Then, inexplicably, Paynter opened up just enough room on the rail, and Velazquez deftly pushed Union Rags through a very narrow gap, beating Paynter to the wire by a nose. Afterward, without mentioning any names, Matz made it clear that switching out the jockeys made all the difference.

“We always thought he had Triple Crown potential,” Matz said. “When we trained him, we gave him four races as a two-year-old and gave him a rest and had a good plan. He never missed a beat. His first race couldn’t have been any easier. He had trouble in his second race and his third race, and that was, what, $3 million. I do really think that this horse, when he has a clean trip and can show himself, is one of the best three-year-olds in this crop. Whether he could have done something against I’ll Have Another, I don’t know, but it sure would have been fun to see.”

Just in this one race, we had history denied, conspiracy theorizing, historical context, Kennedys (!), backbiting, infighting, and all the other things that make covering modern sports such a cluster of twittery goodness.

The point is that horse racing has enough good stories, as we define good stories in a media-saturated age, to keep up with all of the other putatively major sports. Just in this one race, we had history denied, conspiracy theorizing, historical context, Kennedys (!), backbiting, infighting, and all the other things that make covering modern sports such a cluster of twittery goodness. If the whole thing wasn’t draped in such a thick blanket of musty-fustiness, it might actually break through again — not in the way it was in the 1940s, when horse racing stood with boxing and baseball as the only games in town, but certainly at a level beyond the one on which it seems to reside at the moment.

That, at any rate, is the theory of Michael Repole, the native New Yorker who got rich creating Vitaminwater and then selling it to Coca-Cola. Repole had a winner in Caixa Electronica earlier on Saturday’s card. “The problem we have is that the typical racing fan is an 80-year-old guy smoking a cigar,” Repole explained. “Read the obituaries any day, and you’ll see us lose a couple more racing fans.

“The biggest problem is that we need to compete as hard as we can on the track, but we need to be unified off the track, and that’s not what’s happening now. This is the only sport where we do almost nothing as far as education goes. Nobody teaches younger people about it, and that is an industry-wide problem.”

Perhaps the sport is too far gone to come back, but it does god’s own terrible job trying to survive. The key to selling an old sport in a modern age is to commodify nostalgia in such a way that the past is used to sell the present, and at the highest price possible. (How do you think we ended up with all those spiffy new ballparks? Why do you think we still have Olympics?) The problem horse racing has is that it may be two generations beyond that possibility. To sell nostalgia, you need a marketplace of nostalgics, and we’re into the second or third generation now of people whose lives as sports fans have not been touched in any way, not even accidentally, by horse racing. But there is history and memory to peddle here, just as there is at Camden Yards or the Indianapolis Motor Speedway. You just have to know where to look for it, and what you’re trying to sell.

Maybe it’s just me, though. Memory is something very precious in my family. Anything I can remember — Secretariat running alone, or the proud way Seattle Slew tossed his head, or Affirmed and Alydar pounding away down the stretch, or, now, Union Rags whipping through along the rail — I consider of substantial value. This is something I learned one day at, of all places, Belmont Park, just before the race began.

It happened the last time I went to the Belmont. It was 1989, my last year as a columnist at a plucky Boston tabloid owned by a glorified Australian tits-and-bum merchant who had not as yet ruined television news or gotten his own ass in a crack because his employees across the pond decided to get all Gordon Liddy on the cell phones of, among other people, teenage murder victims. At roughly the same time, my father was in a nursing facility for Alzheimer’s patients. He hadn’t said a word in almost two years.

It seems so very long ago. The Internet was still some strange damned thing the military had, and to which Al Gore and Newt Gingrich were trying (vainly) to get the rest of us to pay attention — so, to gamble seriously, you still had to bestir yourself and come out to the track, or at least wander down the block to the local candy store with all the telephones in the back. And, speaking of which, telephones were only then becoming portable. Most of them still squatted on tables and hung on the wall, and some of them even had dials. It all seems so very long ago.

It was shortly before the big race of the day, as I recall. One of the phones rang on one of the tables, and somebody called my name on the intercom. The buzz and hum were just starting to rise to a crescendo outside, and I had to cover my other ear to hear what was being said. My wife was on the phone. My father had contracted pneumonia and was being hospitalized. The families of Alzheimer’s patients have a curious relationship with pneumonia, which often occurs in the patient because the patient has essentially forgotten the difference between breathing and swallowing. The patient then aspirates some food, which gets into his lungs and causes the pneumonia. Before Alzheimer’s was identified at the beginning of the last century, literally millions of Alzheimer’s patients were recorded as having died of pneumonia, which was really only the proximate cause of their deaths. But their families developed an ambivalent relationship with the disease that could put an end to the wretched course of the underlying disease, and this undoubtedly contributed to the odd nickname pneumonia developed down through the years. It was called “The Old Man’s Friend.”

Anyway, my wife told me that the doctor treating my father’s pneumonia needed to hear from me that night about what is called the “Do Not Resuscitate” call. In short, the doctor was going to ask me if I wanted to let my father die. I remember that the decision did not take a second. To this day, I am startled by how easy it was. (Anyone who thinks this callous or cruel has not looked Alzheimer’s in the face.) I’m going to tell the doctor to let him go, I told my wife. And, at that moment, I swear to God, the gates slammed open and the Belmont Stakes went off. A horse named Easy Goer won. I made up some of the day’s losses on a French horse named Le Voyageur, who came in third at a decent price. A huge thunderstorm blew up that night and, as the rain and wind lashed the trees outside my hotel room, the doctor finally called and I gave him the instructions. Then I watched the lightning for a good long while.

All of that came back on Saturday as I wandered around the press box at the track and then down to the paddock, with its strange commingled aromas of fresh flowers, leather, old beer, and stables. I remembered the sound of a thousand conversations going on around me, and the unique crunch of the dirt beneath my feet. I spent a long time taking it all in. Memories, I decided, are only as strong as the things to which they are attached, and only as sharp as your long-running senses allow them to be.