Keeping it real in the booth

Counting down the madness

Editor’s note: This column appears in the March 12 issue of ESPN The Magazine and was written previous to Shaun Livingston’s knee injury.

My third season as a Clippers season ticket-holder has been hijacked by a single nagging question: What happened to these guys?

On the surface, the answer is simple: chemistry problems. Trot out those two words, and whoever wants to know stops asking what’s wrong. Oh, chemistry problems. I get it. Everyone understands the concept of bad chemistry. It can surface in your office, on the floor of your college dorm, during a bachelor-party weekend, even on a long car ride. Different personalities don’t mesh, or one bad apple decides to submarine the greater good. Maybe the wrong person leaves the group. Maybe a combination of seemingly harmless things coagulate to throw off the dynamic. However it happens, it happens more often than you think.

For instance, during my junior year of college, our friend Blueboy went abroad for a semester, and our group imploded like the last 30 minutes of a Behind the Music special. Blueboy was the guy who kept everyone loose. He farted on people’s heads when they were passed out, walked into crowded rooms with no pants on, gave everyone a running update on the status of his hemorrhoids — that kind of juvenile stuff. But it turns out we couldn’t survive without his insanity. Looking back, he was our Shane Battier, the guy who transcended stats. Blueboy was our glue guy, the one who made everything go. Once he returned to campus, we were fine again. 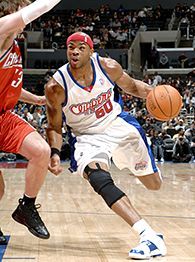 The Clippers are decidedly not fine. Expected to contend after nearly toppling the Suns last May, they brought back the same coach and players, swapping only Vlad Radmanovic for Tim Thomas … and it’s as if someone dipped the roster in chicken blood. After starting off 5-1, they’ve dropped 28 of 49 and have shown a disturbing lack of fight against the elite teams. In their past eight games against Utah, Phoenix, San Antonio, Dallas and Detroit, they’ve been pounded by an average of 22 points.

Normally in these situations I blame the coach, because NBA coaches have a knack for killing a good thing by overthinking, playing too many guys and juggling crunch-time minutes … you know, all the stuff Mike Dunleavy does. But it’s not his fault the team gave him a $21 million extension in December, even as the Clips were quitting on him and each other. That set up an unparalleled scenario in which the coach needed to be fired even before his extension kicked in. Naturally, the team needed to shake things up before the trade deadline, and naturally, they didn’t make a single move, even though the locker room had become so toxic that Doug Christie bolted midway through a 10-day contract. When a reality-TV star can’t handle the dysfunction, you know you’re in trouble.

Clippers fans know it was a mistake to hand over the offense to a not-ready Shaun Livingston. We know the team’s spacing has been atrocious and that no perimeter player has shot well except Cuttino Mobley, allowing defenses to double Elton Brand and Chris Kaman. We know sulking swingman Corey Maggette is apparently trying to break the record for most bad jump shots taken with 15 seconds left on the shot clock. We know nobody except Brand has a defined role, that it’s unclear if the Clippers are a running team or a half-court team, that they can’t get stops when they need them. And that explains why they’re struggling.

Still, this same group of guys had a spark last season, and now it’s gone. If this were a relationship, the couple would break up. But these Clippers have to go on the same bad date over and over again. It’s basketball Groundhog Day. And bad team spacing and shooting can’t account for that.

Heading into the season, my biggest concern was that the team had too many good players. When I mentioned this, a friend who works for the team responded, “Now, that’s a problem we’ve never had before!” But it’s true. Brand, Mobley, Kaman, Thomas, Livingston, Maggette, Sam Cassell and stopper Quinton Ross are all crunch-timers. That means three unhappy players will always be sitting down the stretch (red flag No. 1). They planned on using Maggette as a sixth man, but he’s a guy who averaged 22 ppg two seasons ago and fancies himself a starter (red flag No. 2). And they expected Cassell would simply hand the team over to Livingston, even though Sam still had something left (red flag No. 3).

But worse than all that is the fact that management gave new contracts to Cassell, Kaman and Thomas. Not surprisingly, all have played with a corresponding lack of desperation since. In particular, Thomas has coasted through certain games with the intensity of a stoned Burger King employee wandering away from the cash register to see if the new batch of fries is ready yet. Throw in Livingston’s unease, Maggette’s polarizing bitterness toward Dunleavy (which has festered since the team tried to trade him last winter for Ron Artest), Brand’s dead legs (thanks to a 91-game season and a trip to the World Championships) and Dunleavy’s inability to understand the collateral damage that comes with juggling players week to week, and the fall of the 2007 Clippers was predictable, even if no one saw it coming, including me. It’s a skilled bunch of players that’s going nowhere because it’s not much of a team.

Could this spiral have been sidestepped? Easily. The Clips should have held off on re-signing Kaman, forcing him to work for his extension. They should have installed Cassell as the starter, forcing Livingston to take his job. They should have passed on Thomas — the captain of the Guys Who Should Be Paid Only With One-Year Deals All-Stars — and given his minutes to James Singleton, an underrated energy guy. And they should have traded Maggette last summer, because they had to know he’d always hold a grudge after the aborted Artest deal. Hey, you can’t reconcile with an ex-girlfriend after you dump her, and you don’t bring back an unhappy player. One bad apple can submarine an entire group. That’s Chemistry 101, right?

In the irony of ironies, the Clips nearly dealt Maggette for Battier before Houston trumped their offer last June. Now the Rockets have evolved into the anti-Clippers, a team with clearly defined roles, two good-natured superstars flanked by hardworking sidekicks and a savvy coach who emphasizes defense and smart possessions. Headed for 50-plus wins and a top-five seed in the West, the Rockets survived the loss of T-Mac for nine games and Yao for 29 (and counting). That’s what you get when you build chemistry, not a real-life fantasy team.

Anyway, it looks like I won’t have to spring for playoff tickets. Only one person could save the Clips at this point: The Blueboy. For the right money, I guarantee he’d quit his job, not complain about minutes and fart on anyone’s head who fell asleep on the charter. Every team needs that guy. But if the Clips were dumb enough to extend Kaman and Dunleavy and keep Maggette, I can’t see them being smart enough to sign Blueboy. Sometimes in life, you get what you deserve.