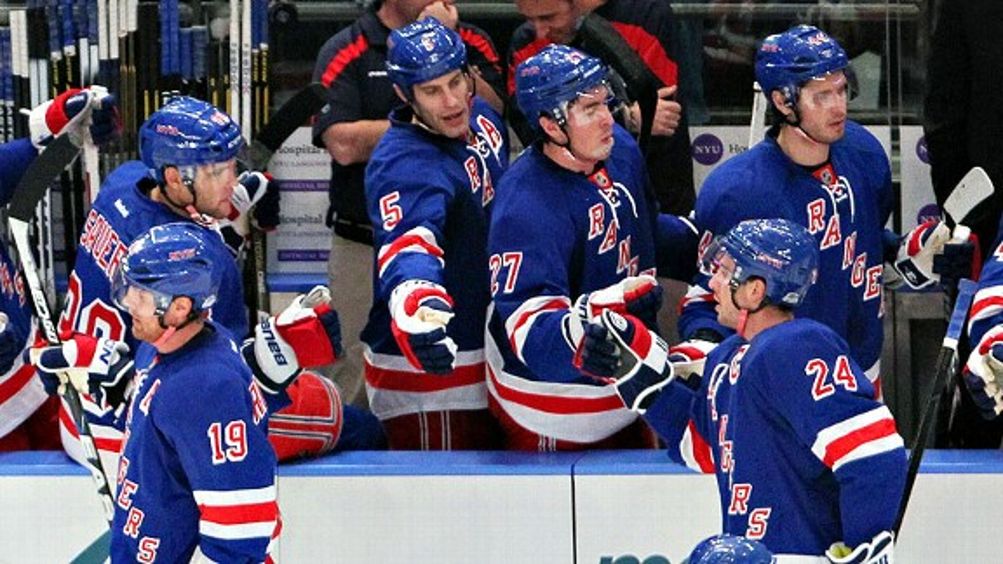 The New York Rangers’ 2011 playoff hopes hung in the balance until the last day of the season, with the team forced to sit and await the outcome of a Carolina Hurricanes-Tampa Bay Lightning game. As everyone idled, coach John Tortorella grew testy when asked whether making the playoffs would affect how he considered the success of the team’s season.

“I am not going to listen to any bullshit as far as what type of year this was if we don’t get in for some reason,” Tortorella said. “Because it’s bullshit because too many good things have happened with this club and we are on the right road and we are doing it the right way. So don’t even bother asking me. Write what you want, but don’t ask me about that.”

As it turned out, Carolina lost and the Rangers got in. (They fell to the Caps in the first round.) But Tortorella’s comments at the time were telling: This had become an organization more focused on process than pressure, unlike some of the Rangers’ teams of the past. New York had grown infamous for much of the early and mid-’00s for its borderline-random moneyed grabs at all the aging free agents du jour, but the newest iteration of the franchise was more focused on building a contender the long-term way — through smart drafting and focused development. Players such as Marc Staal, Brandon Dubinsky, Artem Anisimov, and Derek Stepan were all acquired in the first two rounds of the draft, while Ryan Callahan, now the team’s hard-nosed, workhorse captain, was picked in the fourth. (Goaltender Henrik Lundqvist was selected in the seventh round in 2000.)

Of course, this didn’t mean the team was going to forgo free agents entirely — far from it. With Marc Staal still out with a troubling concussion, the team’s best defenseman has been 2006 undrafted free agent Dan Girardi, who now leads all NHLers in time on ice per game.1 In 2009 they picked up sniper Marian Gaborik, and this offseason they went all-out for the biggest name, signing center Brad Richards. But with a young core of players who have been together for years now, including on lines in the minor leagues, the acquisitions seemed a bit more deliberate. With Lundqvist in net last season recording a league-high 11 shutouts, it wasn’t like the Rangers had to be particularly high-scoring to win games. But they still had trouble consistently getting enough goals to win outright, instead going to so many overtime games and shootouts that it almost cost them their playoff spot. The hope was — and remains — that Richard could take some of the scoring pressure off guys like Gaborik and give the team some extra oomph.

In Tuesday’s game against the Islanders, that’s exactly what he did, breaking a 2-2 tie with less than five minutes to play to give the Rangers the win, their seventh straight. (If they can beat Montreal on Saturday, it’ll be the team’s longest win streak since the ’70s. Thanks, Olivia Munn!) The recent success isn’t worth getting too fired up about — the wins haven’t exactly come against the league’s toughest competition — but as Torts would say, the team is on the right road.

There were other satisfying moments throughout the game, one being Sean Avery, recently recalled from a stint in the minors, scoring his second goal in two games,2 and the second being Ryan Callahan’s earning a goal and an assist. Yeah, yeah, the goal was an empty netter, but it was assisted by young defenseman Ryan McDonagh, which was in many ways symbolic. The Rangers acquired McDonagh, one of Montreal’s top prospects, in a 2009 trade that off-loaded one-time star player Scott Gomez — and his star-player-sized salary — to the Canadiens. Gomez has done basically nothing since then, and is now one of the biggest thorns in Montreal’s side. For once, New York is on the other side of that deal.

The two best goals of the week — and arguably, so far, of the season — came in the same game: Tuesday night’s contest between the Pittsburgh Penguins and the Colorado Avalanche.

The Avalanche’s Matt Duchene, vodka enthusiast, went through an early-season mini-slump a few weeks ago. “I try to skip to step 10 before I start step one,” he explained to the Denver Post. “I’ve always been someone who has wanted to run before I could walk.” He’s been on a sprint lately, though, amassing seven goals — many of them highlight-reel-worthy — and seven assists this season.

His prettiest score yet came on Tuesday, when the lefty cradled the puck through his legs and onto his backhand before sending it past Pittsburgh goalie Marc-Andre Fleury. I say “cradled” pretty literally: It was one of the downiest moves you’ll ever see. Duchene could rock a baby to sleep on that stick. (He’d also dominate one of Gordon Bombay’s egg practices.)

Duchene’s goal put the Avs up 2-0, and they’d go into the first intermission with a 3-1 lead. But the Penguins responded with five unanswered goals, including four in the third period, to leapfrog to a 6-3 win. Evgeni Malkin earned the game winner with an unreal effort that began well before the goal was scored. After forcing a Colorado turnover behind the net, Malkin received the puck from teammate James Neal and beat Colorado’s Gabriel Landeskog through the legs, deked out goalie Semyon Varlamov, and netted the puck with a diving shot. The whole sequence was utterly Malkin: half beauty, half beast.3

True confession, though: As many times as I’ve watched and rewatched Geno’s play on this video, the most captivating part might be right at the end. What sweet nothings do you think Dan Bylsma must have been whispering into Neal’s ear to make the dude smile so maniacally like that? I mean, other than reminding him of his stats so far this season?

This week it’s a three-way tie between the Carolina Hurricanes, Anaheim Ducks, and New York Islanders. At 6-10-3, the Hurricanes’ situation isn’t necessarily dire just yet, but what’s been most worrisome is the play of captain Eric Staal. When his former winger Erik Cole went to Montreal as a free agent this summer, many thought it would be Cole suffering from the breakup, but it’s been the opposite.4 Staal has a league-worst plus/minus of minus-18 and has scored only four goals this season, two of which came in the second game. Coach Paul Maurice — whose own job is on the line these days — has recently tried moving Staal from center to wing, hoping that will stir something up. Carolina hopes it will, because as Staal goes, so goes the team: When he finally broke a goal-scoring slump on Saturday against Pittsburgh, it was a game winner, and the only game the Canes have won in the past two weeks.

Slumping Anaheim showed promise against the L.A. Kings last night in the first of a home-and-home “Freeway Faceoff” series, tying the game with a few minutes to play in regulation at 1-1 and taking the Kings all the way to a seven-round shootout, but ultimately lost. (They’ll get a rematch in Anaheim tonight.) On Sunday night, Bobby Ryan called the team’s play “embarrassing,” and he was right — the Ducks’ best player this season has been Teemu Selanne, and the man’s 41 years old.

And the Islanders, oh the Islanders: They outdid even themselves with the introduction of a new alternate jersey so hideous5 that even the Gorton’s Fisherman is close to sitting the whole organization down and being like, “Look, there are a bunch of people in this room who love ya like crazy, but we feel like we’re losing ya.” (Oh yeah, and the team is also 1-6-3 in its past 10.)

Taking It Coast to Coast: A Skate Around the League

The biggest back-and-forth of the past week began in a game between the Bruins and Sabres over the weekend. Boston’s Milan Lucic10 lost control of the puck on a breakaway and then plowed at great speed into Buffalo goalie Ryan Miller, who had come out of the net to challenge for the loose puck. Miller was knocked to his ass, his helmet was knocked from his head — and yet no one on the Sabres so much as attempted to knock Lucic out.

I could go on and on about what has transpired since. It included Miller, now out with a concussion,11 calling Lucic a “gutless piece of shit,” Lucic’s remarking that his team “wouldn’t accept anything like that,” Bruins coach Claude Julien’s noting that “I know for a fact that if Milan had intended on hitting [Miller], he would have never got up,” Brendan Shanahan’s declining to issue any suspension for Lucic, Buffalo coach Lindy Ruff’s stating that it’s now “open season” on goalies, Shanahan’s calling that “irresponsible”, and so on and so forth.12

But here’s where I’ll instead stop and tell you to just go read this excellent piece by Steve Dangle, who makes a very compelling (and value-neutral!) case that, whether you like it or not — and whether it should be punished by the league or not — the Boston Bruins “are giving the other 29 teams in the NHL the punk test” and “so far, everybody has failed it.”

I may get fired
for referring you to this
Ryan Whitney tweet.

Previously from Katie Baker:
Manning-ology, Lady Byng, and the Pitfalls of Great Free Tickets
The Best Team in the NHL
Wedded Blitz! The October Marriage Season
The Rise of the Female Distance Runner
Benching Ovechkin
The Horrible Habs
Coming to Grips With the Winter Classic
The Endless Battle Over Hockey Fights