The Evolution of the Hybrid Defender 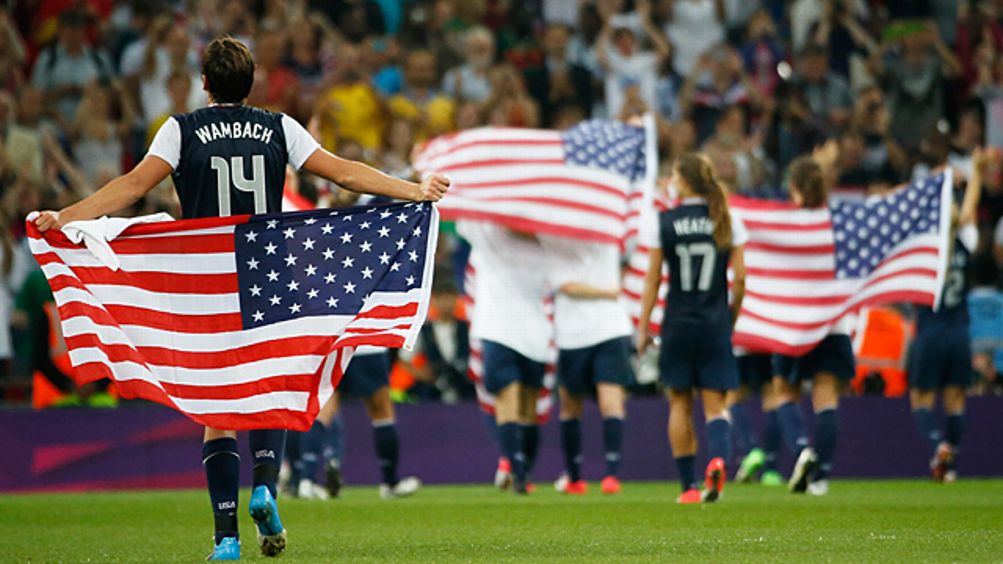 On Thursday, at around 10 p.m. in London, 5 p.m. Eastern Standard, and permanent high noon on the clock in Abby Wambach’s head, the U.S. Women’s National Team beat Japan 2-1 to win their third straight Olympic gold medal. Which, when you write it down like that, almost sounds like it makes sense. Like: There was a schedule, and things happened according to that schedule. Like: U.S. coach Pia Sundhage had a plan, and the team executed that plan. Effort was invested; results were obtained. Tournament-mandated sideline vests were sported. Business as usual. Move along.

In fact, though, the win over Japan culminates an Olympics — really a full year of international competition, maybe more — during which the defining characteristic of the U.S. women’s soccer team was how completely, boundlessly, ostentatiously crazy everything that happened to them has been. I mean, in the Hope Solo era, every training camp is going be a self-contained maelstrom of minor drama, but what’s really astonishing is the team’s penchant for on-pitch chaos. Every time they take the field in a big match, Arkham Asylum breaks out.

Consider: There was the Women’s World Cup quarterfinal against Brazil last summer, when, the U.S. having clung to life with 10 players for the better part of an hour, Wambach went legendary in the last sliver of an instant of extra time to send the match to penalties (where the Americans won). There was the semifinal a couple of days later when the U.S. scored twice in the last 11 minutes to beat France. There was the Women’s World Cup final against Japan, when the Japanese team made up two late-game deficits, Homare Sawa equalized in the 117th minute after Wambach had given the U.S. the lead in the 104th, and the match went to penalties (where the Americans lost). There were the back-to-back Olympic qualifiers in January when the U.S. beat the Dominican Republic and Guatemala 14-0 and 13-0, respectively.1 There was the Olympic group-stage match in which Colombia’s Lady Andrade punched Wambach in the face. Most recently, and most crazily, there was the Olympic semifinal against Canada on Monday, which featured a stunning hat trick from Canada’s Christine Sinclair, some spectacularly bad defending, some even more spectacularly bad officiating, multiple comebacks, a full-fledged head-stomp starring Melissa Tancredi’s Canadian boot and Carli Lloyd’s American face, and a 123rd-minute, microsecond-before-the-death goal by Alex Morgan to give the U.S. the 4-3 win.

Thursday’s gold-medal game was — marginally — less thrilling than some of the matches that preceded it. Compared to, say, the Canada game, it clocked in at around “really tense and exciting” rather than “your eyeballs have just floated out of your skull and started spinning around like tops.” That is, all it had to offer was a dramatic revenge story line, some gasp-worthy saves by Solo, two goals by Lloyd (one of them a screamer from just outside the box following a 30-yard run with the ball), a near-comeback keyed by a Yuki Ogimi goal, a ton of crazy scrambling in the box, wide-open play, and a lot of shots of the Americans dancing around with flags while wearing Nike shirts that read “GREATNESS HAS BEEN FOUND.”2 Am I getting the point across here? If you like your sports wild, a little rude, and punctuated by massive heart attacks, the USWNT is as pure a drug as you are likely to find on this earth. 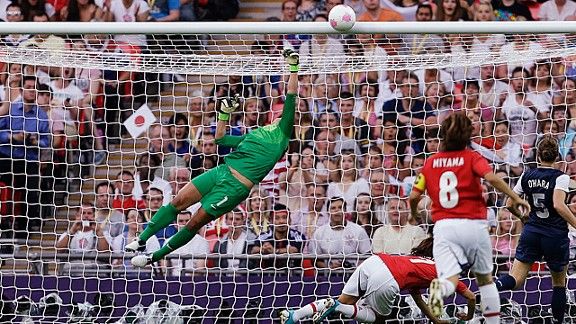 There are a couple of weird things about this state of affairs, one of which is that it contradicts the team’s own sponsor-curated image: Instead of marketing the U.S. women as a cyclone of unpredictable drama, Nike presents them as a kind of steel-gray emblem of hard work and determination. The visual cue here is Solo’s beautiful, unyielding face, shown in washed-out colors against a boxing-gym wall or a storm cloud or a vaguely ominous flag; or else it’s Wambach grimacing in dawn-workout fog under the caption “PRESSURE MAKES US.” The other weird thing is that the team has been extremely successful with the whole apocalypse-on-grass routine — Olympic gold medalists, World Cup runners-up — despite the fact that they’ve arguably regressed at, you know, playing soccer, at least compared to the rest of the world’s top teams. It’s not that, say, Alex Morgan and Lauren Cheney are clods where technique is concerned; they’re not. It’s more that the U.S. is relying on physical strength, long passes, and athleticism to make up for, e.g., the way they sometimes completely forget to defend for 10 straight minutes. (You know, minor shortcomings.) Watching the cool and elegant way Japan moved the ball around the field, it was hard at times not to feel worried about the USWNT’s smash-and-sprint 4-4-2. Or at least it was right up until they won the gold medal with it.

This is probably an exaggeration, but you sometimes get the sense that the team’s brand identity was designed to reflect what should be happening (the U.S. facing grim odds as their ’90s and ’00s structural advantages are erased by other countries’ improvement), and that what actually is happening (the U.S. winning like mad by winning like mad) is too nuts for even Nike to try to predict or control it. Which is scary.

Speaking of control: Yeah, the team benefitted from a couple of really sketchy calls on their way to Olympic gold. Against Canada, there was a sequence when an unfathomably weird, if not technically incorrect, goalkeeper-delay call against Erin McLeod led to the indirect free kick that led to the very questionable whistle for hand ball that led to the penalty that led to extra time. Against Japan, Tobin Heath handled the ball in the area during the first half and wasn’t whistled for it. And here, just as a sidebar, we might note that one of the best things about this U.S. Olympics run was that it proved beyond the last dying doubt that women’s sports can make people just as crazy and stupid and Internet-furious as men’s sports do. Many, many otherwise sane fans have taken to Twitter in a red heat this week to assert that the matches were fixed, leading many American fans to respond by saying terrible things about Canada (or at least the most terrible things it’s possible to say about Canada), leading the original fans to come back with the dark implication that because the U.S. was involved, of course the matches were fixed.3 Which seems realistic to me:

OBAMA: What’s the temperature like in Oslo this time of year?

OBAMA: 20 or 22? Hey, that’s great. Be a shame if somebody lost a missile and it hit TEN MILLION DEGREES [knocks paperweight off desk].

OBAMA: [on video screen, to secret committee meeting of Swiss bank presidents] Say, that’s a nice international bond market you’ve got there. Be a shame if somebody torpedoed it.

SWISS BANKER: Please, Mr. President, be reasonable! What do you want?

OBAMA: You know what I want. I want a gold medal around Rachel Buehler’s neck.

SWISS BANKER: We’ll … we’ll see what we can do.

And anyway, this led to a lot of Internet name-calling and sort of surprisingly hurt feelings on both sides, and even a lot of players said nasty things,4 and it was a little tough to credit a conspiracy theory when American players were actually being punched and stomped on without so much as a yellow card shaking loose, but whatever. The point is, women’s soccer was finally attracting the kind of angry cultural froth normally reserved for men and, in North America, for other sports. That’s progress!

The idea I’m building up to here, which I would really like to preface by lowering the lights and throwing some sparkly silver dust up around the camera, is that the only way to make sense of the U.S. women’s lunatic run over the last year is with reference to the concept of destiny. Destiny doesn’t (for all I know) exist, but sometimes it seems like it exists, and the moments when it seems like it exists are usually interesting precisely because destiny appears to exist in them. These moments happen rarely in sports, but they do happen often enough that everyone can recognize the contours. Destiny, please note, is not the same thing as “going on a Cinderella streak” or “getting some lucky breaks.” The destiny feeling in sports comes when you have an overwhelming sense of reality being suspended — when things happen that make no sense, but that somehow tend toward a single definite outcome. Plays that look like they defy the laws of physics, crazy late-scoring runs, moments when everything goes giddy. We talk about destiny in sports like it’s nice, like it’s all NCAA buzzer-beaters and flawless balance-beam dismounts, but the truth is, destiny is ruthless. Destiny loves bad calls; what better way to get what it wants? Destiny wrecks people and leaves them crying in the tunnel. Destiny isn’t about justice or common sense. Destiny is what happens when it feel like there’s a secret gambling boss in Macau puppeteering behind the scenes, only there is no secret gambling boss.

So it’s corny and definitely inaccurate, but I don’t know how to explain the current state of the USWNT except to say that they were destined to lose to Japan in the 2011 World Cup final and destined to reverse that loss in the 2012 Olympic Games. The stretch between the Brazil game last year and the gold-medal match Thursday was just too full of moments when it seemed like gravity and the rules of the game had been set aside by some mysterious higher power. Maybe that’s a sign that teams create their own luck through hard work, or maybe chance sometimes does funny things to the flimsy order of sports. Or maybe the team just has chaos in its character.5

Filed Under: Brian Phillips, College Sports, People, The U