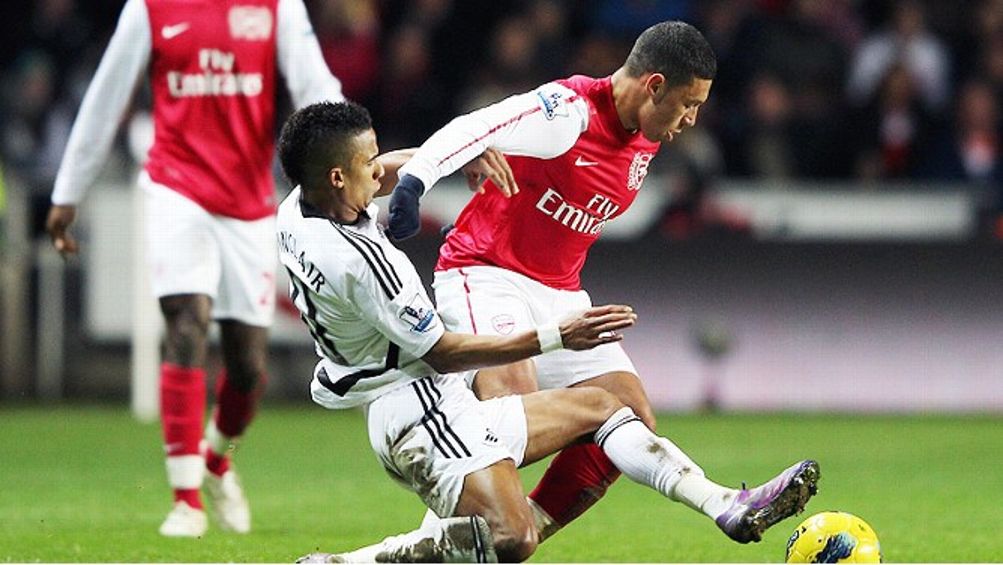 It’s a great comedy bit, but it’s not really accurate as a depiction of soccer culture. Soccer fans know soccer is boring. Soccer fans have seen more soccer than anyone. We’re aware that it can be a chore. Fire up Twitter during the average Stoke City-Wigan match and you’ll find us making jokes about gouging out our own eyes with wire hangers, about the players forgetting where the goals are, about what would happen if we released a pride of lions onto the pitch. (Answer: The game would still finish 0-0.) When Ricky Gervais recorded his “David Brent on Football Management” clip for the BBC during the first run of The Office, he snuck in a similar dig at the tedium of some of Liverpool’s greatest teams:

Do you think that Alan Hansen or Mark Lawrenson would have had the careers they had if they’d had the skills but not the discipline? If they didn’t have the concentration?

It’s not easy passing the ball back to the goalkeeper every single time you get it. For ninety minutes.

Translation: Those guys were good. Now please, God, someone release the lions.

So why do soccer fans do this? Assuming we follow sports for something like entertainment,2 what do we get out of a game for which the potential for tedium is so high that some of its most famous inspirational quotes are simply about not being dull?3

I keep thinking about this question lately, maybe because I’ve been finding myself drawn to more and more boring games. This past weekend, I sat through the slow cudgeling death of Liverpool-Stoke. The final score was 0-0, but the final emotional score was -5. During Swansea’s deliriously fun 3-2 upset of Arsenal on Sunday, I kept switching over to Athletic Bilbao’s mundane 3-0 win over Levante. Why am I doing this? I thought, as Fernando Amorebieta whuffed in a gloomy header and Levante pinned themselves into their own half. But I kept checking back.

There are two reasons, basically, why soccer lends itself to spectatorial boredom. One is that the game is mercilessly hard to play at a high level. (You know, what with the whole “maneuver a small ball via precisely coordinated spontaneous group movement with 10 other people on a huge field while 11 guys try to knock it away from you, and oh, by the way, you can’t use your arms and hands” element.) The other is that the gameplay almost never stops — it’s a near-continuous flow for 45-plus minutes at a stretch, with only very occasional resets. Combine those two factors and you have a game that’s uniquely adapted for long periods of play where, say, the first team’s winger goes airborne to bring down a goal kick, but he jumps a little too soon, so the ball kind of kachunks off one side of his face, then the second team’s fullback gets control of it, and he sees his attacking midfielder lurking unmarked in the center of the pitch, so he kludges the ball 20 yards upfield, but by the time it gets there the first team’s holding midfielder has already closed him down and gone in for a rough tackle, and while the first team’s attacking midfielder is rolling around on the ground the second team’s right back runs onto the loose ball, only he’s being harassed by two defenders, so he tries to knock it ahead and slip through them, but one of them gets a foot to it, so the ball sproings up in the air … etc., etc., etc. Both teams have carefully worked-out tactical plans that influence everything they’re trying to do. But the gameplay is so relentless that it can’t help but go through these periodic bouts of semi-decomposition.

But — and here’s the obvious answer to the “Why are we doing this?” question — those same two qualities, difficulty and fluidity, also mean that soccer is uniquely adapted to produce moments of awesome visual beauty. Variables converge. Players discover solutions to problems it would be impossible to summarize without math. The ball sproings up in the air … and comes down in just such a way that Dennis Bergkamp can pull off a reverse-pirouette flick that spins the ball around the defender and back into his own path … or Thierry Henry can three-touch a 40-yard pass in the air before lining it up and scoring a weak-foot roundhouse … or Zlatan Ibrahimovic can stutter-fake his way through an entire defense. In sports, pure chaos is boring. Soccer gives players more chaos to contend with than any other major sport.4 So there’s something uniquely thrilling about the moments when they manage to impose their own order on it.

But I think there’s more to the relationship of fans and boredom than just magic moments. I want you to like soccer if you don’t already, so I probably shouldn’t admit this. But the game gets in your head. Following soccer is like being in love with someone who’s (a) gorgeous, (b) fascinating, (c) possibly quite evil, and (d) only occasionally aware of your existence.5 There’s a continuous low-grade suffering that becomes a sort of addiction in its own right.6 You spend all your time hoping they’ll notice you, and they never do, and that unfulfilled hope feels like your only connection to them. And then one day they look your way, and it’s just, pow. And probably they just want help moving, and maybe they call you Josie instead of Julie, but still. It keeps you going. And as irrational as it sounds, you wouldn’t trade this state of being for a life of quiet contentment with someone else. All you could gain would be peace of mind, and you’d lose that moment when the object of your fixation looked at you and you couldn’t feel your face.

Soccer is, in other words, both romantic and tragic, and the soft agony of a bad game is an inescapable part of this. You spend all your time hoping something will happen, and it never does. You get a surge of adrenaline every time the ball flies anywhere near the goal,7 and you’re always disappointed. But then, every once in a while, James McFadden will score from 30 yards at the Parc des Princes to give Scotland an impossible 1-0 lead over France, and a ponderous game will go all kinds of nervous-breakdown crazy. And for fans it’s practically an out-of-body experience — not just because it was a great play, but because it was so unlikely that this match could have been graced with a great play to begin with.

So it’s not that a boring game is purer than an entertaining game or that there’s something moral about enduring tedium (although I know fans who might make that argument). I watch soccer to be amazed. One of my favorite books about fandom is Soccer in Sun and Shadow, by the Uruguayan writer Eduardo Galeano, whose guiding principle is “a pretty move, for the love of God.” But the beauty of the game matters more when you know you can’t take it for granted — when it arrives, as Galeano writes, it’s a “miracle.”8 There was a moment last Sunday when I was flipping between the extremely exciting Swansea-Arsenal match and the generally-not-in-any-way-exciting Athletic-Levante match. Just as I switched over, Athletic’s Oscar De Marcos, who had previously failed to score on an easy rebound,9 dribbled straight through two defenders into the area, drawing the goalkeeper out to the right side10 of the six-yard box. Then he lofted a high cross that dropped a foot from the goal line, just inside the left post, just as the lurking Fernando Llorente, who’d sneaked behind the defense, appeared in precisely that spot to head it into the empty net. In its weird, furtive way, the goal was better than the undeniable drama going on in Swansea. It was like a wink from the eye of the abyss. One of those lovely, foolish moments when you think that soccer might love you too.