Memories of a Fighter 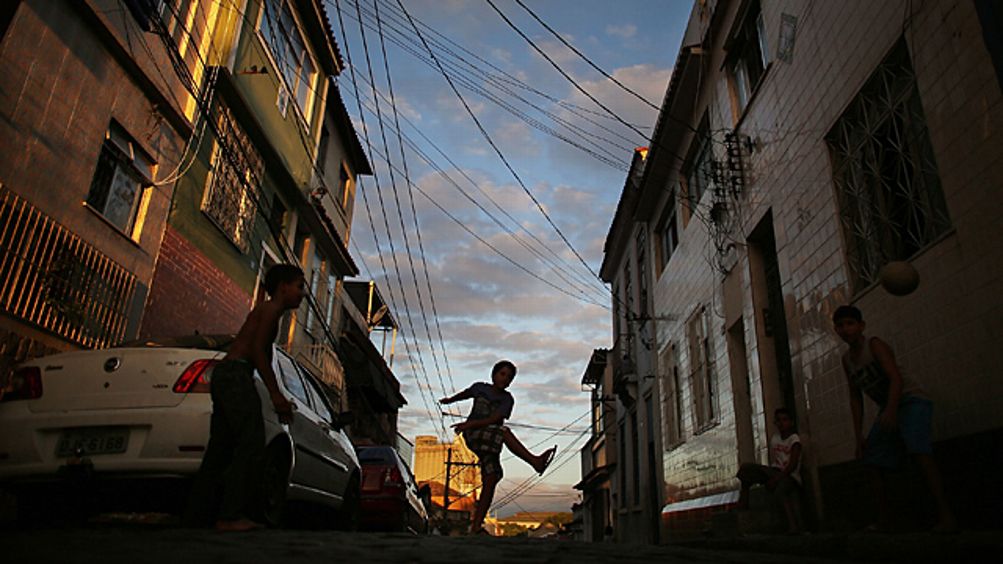 Three points make a trend, but in a World Cup year, two points are good enough. So here’s one: Early on the morning of October 29, 31-year-old Geisa Silva, a social worker with the Brazilian military police, found her husband’s backpack on their front porch in Rio de Janeiro. Joao Rodrigo Silva Santos was a retired professional soccer player, a journeyman who’d spent most of his career knocking around the Brazilian lower leagues; post-retirement, he ran a food shop in the city’s Realengo neighborhood. He hadn’t come home the night before, and Silva had been worried, jumping up at the sound of every car. Before dawn, she got ready to leave for her job with a police unit responsible for conducting an anti-gang crackdown. When she opened the front door, she saw the backpack. It contained her husband’s severed head.

And here’s point two: Four months earlier, on the afternoon of June 30, during a pickup soccer game in the northeastern Brazilian municipality of Pio XII, a 19-year-old amateur referee named Otavio Jordao da Silva Cantanhede showed a yellow card to his friend, a player named Josemir Santos Abreu. Abreu protested. A fight broke out. Cantanhede pulled a knife and stabbed Abreu twice. Abreu died on the way to the hospital. In retaliation, a group of Abreu’s friends attacked Cantanhede. Cantanhede was — I’m quoting the New York Times — “tied up, smashed in the face with a bottle of cheap sugarcane liquor, pummeled with a wooden stake, run over by a motorcycle and stabbed in the throat.” Then his legs were sawed off. Then his head was cut off and mounted on a wooden post near the field.

And here’s a quick question, just an aside. How do you feel, hearing these stories? I don’t mean how do you think you’re supposed to feel; I mean how do you feel, in fact? Are you intrigued? Disturbed? Sad? Curious? Titillated, in the way that horrifying real-life stories can sometimes leave you titillated? You don’t have to answer. Just think about it.

Two points make a trend. Here are two gruesome stories about soccer-related beheadings in Brazil. On the surface, they have little in common. One is — best guess — about gangs sending a message. The other is about a local conflict that warped into mass insanity. But, well, 2014 is a World Cup year, and Brazil, you might have heard, will be hosting. The second decapitation story had barely hit the wire before a portion of the Western media lined up the horrors and drew the only logical conclusion: Tourists must be in danger.

Of course, they couldn’t just come out and say so. There’s an art to these things. “Beheadings raise concern of violence in Brazil,” USA Today announced in a headline.1 CNN declared that “experts say” (they don’t quote any) that the concerns thus raised “might make fans think twice about bringing their families to Brazil.” Bleacher Report furthered the mystery experts’ speculations on the raised concerns, arguing that the violence “may” affect “the type of tourist that decides to come to Brazil to witness football’s greatest tournament, with families unlikely to take young children.” “How will this affect the World Cup?” was the golden thematic arch bridging countless articles about a story that’s only indirectly tied to the World Cup at all, and after reading enough of them, you could almost appreciate the dead-soul directness of this Buzzfeedy link bait–shriek from PolicyMic, posted after the Pio XII decapitation: “This Horrific Video Will Completely Change Your View of the 2014 World Cup in Brazil.”2

This is all, of course, code language, and it’s not especially subtle code language. It’s a code that pops up again and again when a developing or newly industrialized country hosts the World Cup. The code works on three, possibly four, levels, and it makes me want to throw my desk through a brick wall, so I’ll try to be as precise as possible about the various sleights of late-colonialist hand I think I can trace here.

Take the following sentence; it’s from USA Today, because of course it is, but it could be from anywhere. It goes: “The news of a second decapitation this year in Brazil has raised questions about whether such heinous crimes may deter foreign visitors considering a trip for next summer’s FIFA World Cup.” What is this sentence trying to do, apart from draw the brightest, straightest line between “the news of a second decapitation” and “next summer’s FIFA World Cup”? Is it really aiming to tell you that Questions have been Raised about World Cup attendance?3 Maybe; but I submit that in this instance, the surface level of the code — “questions raised” — is just slippery journalistic-ethics-ese for “Hey, if you go to the World Cup you might get your head chopped off.” That’s the second level, the primal fear bit. It’s not safe down there. Those people are crazy. And note that we’ve been led to this level by a turn of phrase insinuating the possibility of a World Cup disaster — ostensibly because of attendance problems (“deter foreign visitors”), but what you’re actually imagining at this point is a bloodbath (“heinous crimes”). You’re being invited to construct a fantasy in which several hundred thousand tourists less well-advised than USA Today readers like you make the trip down to Brazil and are slaughtered in their replica kits. That’s the third level. Blood-spattered Wayne Rooney jerseys strewn throughout the streets.4

And I’m sorry, but that’s not the only fantasy you’re being invited to construct. The top level of the code is the one in which you feel yourself to exist within a protective bubble of law and security, outside which all is madness. Here in this Holiday Inn Express in Lincoln, Nebraska, you are safe; in South America, life is cheap. That is not simply a fleeting implication, my friends, that is a media strategy and a worldview, and it is not one in which you are encouraged to regard all your fellow humans as equals.5

Sidebar here: Murders involving decapitation are vanishingly rare in the United States (they are vanishingly rare everywhere), but they happen. In 2012, a New Jersey woman cut off her son’s head and put it in the freezer before stabbing herself to death. In 2013, a 49-year-old school nurse was found headless in a South Florida sugar cane field. Two points make a trend. Concerns have been broached about whether Germans will still come to Disney World.

It’s possible that I’m reading too much into a few throwaway news stories. But sometimes throwaway news stories tell you everything you need to know. In 2010, during the buildup to the World Cup in South Africa, countless reports were written about the potential threats to tourists in a country with some of the highest rape and murder rates in the world. “The attacks have raised concerns about the high crime rate in South Africa and the potential risk to foreigners who visit the country,” Reuters wrote; “World Cup Security Raises Concerns,” the Huffington Post added; “Stampede raises concerns over World Cup safety,” NBC chimed in. Shockingly, given that every powerful interest in the country had a massive stake in not enabling the mass execution of tourists, the raised concerns wound up not amounting to much.

What they did do, however, was draw attention away from the actual problems surrounding the South Africa World Cup — you know, the little stuff: state-sponsored mercenaries clearing shanty towns so that tourists wouldn’t have to look at poor people, massive corruption surrounding stadium contracts, violent cover-ups. That stuff was reported on, kind of, but most soccer fans, even the hard-core ones, had no idea it was happening. And when the tournament turned out not to be a tourist-killing machine, South Africa was massively praised in the media for clearing the imaginary bar that the media had created for it in the first place. All the problems — including the very real one of violent crime suffered by South Africans — just went away.

And this matters, because it’s happening again. Most soccer fans know the story of the referee-beheading in Brazil at this point, and I’d guess that a lot of them have sort of loosely filed it under “World Cup–related” in their minds. Same with the murder of Joao Rodrigo Silva Santos. But how many people outside Brazil know anything about the massive ongoing protests there over corruption,6 police brutality, inequality, and cost-of-living increases related to the World Cup and the 2016 Olympics?7 How many people know about the forcible evictions of thousands of favela-dwellers to make room for new sports infrastructure?

There are ways of thinking about World Cup problems, ways of framing a critique, that have the potential to make you, and I apologize for how this sounds, a more responsible person, a better citizen of the planet. And then there are ways that reinforce some vaguely paranoid sense of cultural superiority and, in the process, diminish your capacity for empathy.8 Dwelling on acts of lurid violence that depend on conditions no one will experience at the World Cup does not fall on the good side of that border. Checklist for beheading-concerned journalists: Are your readers married to a Brazilian drug cop? Are they taking a knife to a pickup game? Then they’re not likely to have their heads cut off before the USA-Mexico match.

And once you’ve sailed through that FAQ, you’re free to court World Cup–nation crisis clicks by reporting on, I don’t know, women’s safety, runaway poverty, prison overcrowding, income inequality, anything you like. You’re free to notice that what really links the two beheadings in Brazil isn’t soccer and tourism but social problems that have nothing to do with soccer and tourism, except insofar as the World Cup might be making them worse. Most of that stuff doesn’t make for as juicy a story as your standard sports-adjacent decapitation. But then you might as well use your head as long as you’ve still got it.