The climb of my life

Midway through the ’80s camp classic “St. Elmo’s Fire,” there’s a scene where Billy Hixx and his friend Jules are returning from a wild party, both blitzed, both drifting along in their post-college lives, both hesitant to call it a night. 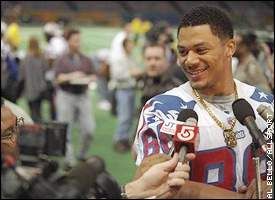 After some flirting on the drive, Billy (the failed sax player, played by Rob Lowe) starts hitting on Jules (the aspiring coke bimbo, played by Demi Moore) and, for once, she turns somebody down. She needs a friend. She needs someone who will listen to her.

But Billy won’t take no for an answer. He tries to smooch Jules, finally grabbing her car keys, shoving them down his pants and telling her, “Come and get ’em.”

An enraged Jules pushes him out of the jeep, punching his shoulders until he finally coughs up her keys. Oblivious, a giggling Billy continues to flirt … but Jules isn’t laughing. She’s crying.

“You break my heart,” Jules tells him. “Then again, you break everyone’s heart.”

Sound familiar? The sports world is littered with Billy Hixxes, those troubled stars who blow into our respective cities and invariably break our hearts. You train yourself to look the other way. You rationalize their actions. You give them second chances. And third chances. And fourth chances. And even though warning signs have been flashing since Day One, you keep allowing your guard to slip and they keep letting you down.

I was remembering Billy Hixx this week for two reasons:

1. “St. Elmo’s Fire” airs on cable at least 16 times per night; for whatever reason, it occasionally pulls me in for a repeat viewing (like last week). Why? I wish I could explain it. Maybe it’s the fascination of watching Judd Nelson back when he still had his mojo … or trying to decide whether I was ever attracted to Ally Sheedy … or wondering why it was OK to stalk people back in the ’80s … or classic exchanges like …

“What the hell is the three-year chairman of the Georgetown Young Democrats doing working for a Republican?”

…or the inherent comedy of Lowe playing the sax, wearing a bandanna and screaming, “Let’s rock!” … or a puffy Moore playing the captain of the 1985 Go-Team … or Andrew McCarthy bugging his eyes and saying, “I love her, man” … or the chill-inducing score that brings back memories of CBS and the ’87 NBA Finals … or Nelson belting out lines like “No Springsteen is leaving this house!”

(Hey, it’s probably the watershed cheesy ’80s movie for me. I’m not ashamed to admit it. As McCarthy would say, “I love her, man.”)

2. The Patriots placed their version of Billy Hixx — star receiver Terry Glenn — on their reserve list last week, abruptly ending his five-year association with the team for at least one season. The move made him impossible to trade or even waive outright until next March. It offered them little cap relief. And yet the Patriots were so anxious to remove The Distraction That had Become Terry Glenn from this season that they didn’t care.

We wanted him to grab his sax, board his bus and go away.

Terry Glenn learned that lesson the hard way as a teenager, when both of his parents had passed away before he even started high school. Few of us can
comprehend that level of loss — how it feels to survive your formative years without unconditional love — and maybe that’s what tempered the anger of
Patriots fans toward Glenn over the years. It’s tough to rip someone when they’ve already had their heart ripped out.

But we worried about him. And when the signs kept popping up like skeletons in the “Poltergeist” pool, well … we should have known something was wrong.

In case you’re not familiar with those signs, here’s how the Billy Hixx Routine usually plays out in sports (with the aid of some Billy-related quotes from the movie):