Today’s burning question: Why can’t anyone create an entertaining TV show that somehow relates to sports?

Given the number of Americans who follow sports and watch television, Hollywood should churn out provocative, entertaining sports-related shows
every few years. Think about it. How many sports movies get released every year? Seven? Eight? Even though only two or three sports movies stood out over the
past few years — “Rounders” and “Jerry Maguire” were the last two classics I can remember — a number of other releases over that time were good enough to
merit “worth-seeing” status. We’re pretty flexible when it comes to sports movies; we’ll watch anything, in many cases more than once.

So why doesn’t this affection translate to sports and television?

Fact No. 1: The last memorable sports-related TV show was “The White Shadow,” which was canceled in 1981 after just three seasons, the third of which
never happened.

(Repeat: The third season of “The White Shadow” never happened. You dreamt the whole thing: Wardell Stone, Coolidge with the afro, Thorpe getting shot,
the Coach putting on 25 pounds, Salami getting thrown in jail … none of it happened. You hear me? Never happened. They canceled the show after Carver
High won the championship and Jackson got shot. That was the final episode. Just take my word for it.)

Fact No. 2: Desperate to recommend a sports-related show, TV critics practically did backflips over “Sports Night,” even deeming it “The Best Show You’re Not Watching.”

You know why I wasn’t watching it? Because it wasn’t funny, because the dialogue was forced, and because the “SportsCenter”-style elements weren’t
even remotely realistic. And apparently, more than a few people agreed with me; despite an onslaught of publicity and critical acclaim, “Sports Night”
didn’t even last two seasons.

Fact No. 3: The only sports-themed shows on TV right now are HBO’s perennially unwatchable “Arli$$” and the fatally flawed NBC sitcom “Inside Schwartz,”
which premiered two weeks ago to an apoplectic national audience. 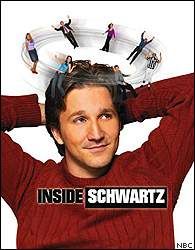 Which show is worse? That’s easy … “Arli$$” is worse. “Arli$$” has been a running joke in the industry for the past few years; figuring out why HBO handed Robert Wuhl his own show and then renewed it year after year is the “Who Shot JFK?” of Hollywood questions. In fact, my friend Doug is convinced that Wuhl’s publicists clandestinely created the new HBO stinkbomb “Mind of the Married Man” and demanded that the wildly untalented Mike Binder write/star/direct as a way to deflect attention way from Wuhl. Interesting theory.

I’m not sure why I despise “Arli$$” so much. Maybe it’s the way Wuhl ingratiates himself into all major sporting events — he’s like the ultimate sycophant, trying to rope people into filming quick cameos for his lame show (and teams actually let him hang around, because he’s allegedly a TV star). Maybe it’s the fact that the show isn’t funny, or the way they rely on painful cameos from athletes and broadcasters, all of whom have that “Hey, I’m on TV!” glow about them. Maybe it’s the fact that I’ve watched four or
five episodes over the years, and I know I’ll never get those 120-150 minutes of my life back.

“Arli$$” reached a new low this summer when HBO moved it out of its 9:30 time slot on Sunday night, apparently because it couldn’t hold viewers for 30
measly minutes between “Sex and the City” at 9 p.m. and “Six Feet Under” at 10. That set up an unprecendented scenario: For the first time ever, a TV
network aired a comedy at 9:00, followed by a one-hour drama at 9:30, followed by another comedy at 10:30 (“Arli$$,” which should have changed its
name to “Feel Free to Change the Channel Now”). Once the underrated “Six Feet Under” had a watchable lead-in, it finally found an audience, and its ratings
took off.

That brings us to the other crummy sports-related TV show on the air right now: “Inside Schwartz.” After last week’s debut, NBC promoted “Schwartz” as “The Season’s No. 1 New Comedy,” which was actually true — the pilot finished fifth in the ratings, not surprising since it aired at 8:30 on Thursday night between “Friends” and “Will and Grace.” Remember, this was the same time slot that featured alleged Top 10 hits like “The Weber Show” and “Jesse.” NBC could air “Celebrity Colonoscopies” in that spot and probably
crack the Top 10.

My editors wanted me to write my “Schwartz” review two weeks ago, after the pilot aired, but I wanted to wait until the second show aired, just in case the “Schwartz” producers fired lead actor Breckin Meyer and replaced him with somebody who was likable and could actually act. No dice. I’m not sure a different lead would have saved the show — it’s pretty bad — but with Meyer around, the show seems doomed. They might as well have hired Jeff George.

Here is the pilot’s set-up in a nutshell: Adam Schwartz is a jilted bachelor, who dreams about becoming a sportscaster, which means everything he says/does
has some sort of sports connection — the way he talks, the analogies he makes and so on (trust me, it sounds much better on paper). As an added hook,
various sports figures make “unexpected” cameos and talk to Schwartz during the show, but only Schwartz can see them (the Sports Gal summed everything up
midway through the first episode: “I can’t believe this is happening”) 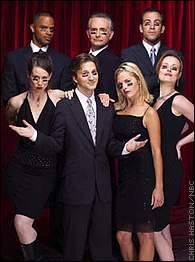 Believe me, I wanted to like it. After all, going into the pilot, I knew that 1.) the immortal Richard Kline (Larry Dallas from “Three’s Company”) played Schwartz’s lecherous father and 2.) Rebecca Gayheart (Dylan’s wife who was tragically killed by hitmen on “Beverly Hills 90210”) both guest-starred in the first episode. Two of the greats! Unfortunately, Kline’s character was pretty weak, and Gayheart looked so skinny that you could count her ribs. I’m still holding out hope for Kline though — they should start dressing him in Larry’s old ’70s “swinger” wardrobe immediately. I’m not suggesting it, I’m demanding it.

Anyway, here are five reasons why “Inside Schwartz” won’t make it, despite its cushy time slot:

1. The Table Test
I knew we were in trouble from the first scene because of Meyer, who submitted two of the limpest performances of the past decade in “54” (one of
those “so-bad-it’s-good” movies) and “Road Trip” (which I actually liked). It all comes back to my world-renowned Table Test, which can be used for any
actor, athlete, writer or broadcaster. It centers on one phrase: “I’m not sure if Person X brings anything to the table.”

Hey, sometimes that’s not a bad thing. We all have friends who don’t say much or add much, but they’re fun to have around, know when to laugh at the right
times and generally fit in with everybody else in your group (the Robert Horry of friends). And maybe they don’t bring that much to the table, but
they also don’t take things off the table — they aren’t rude, they aren’t inappropriate, they aren’t stupid, they don’t act like drunken idiots,
and so on.

Think of it this way: