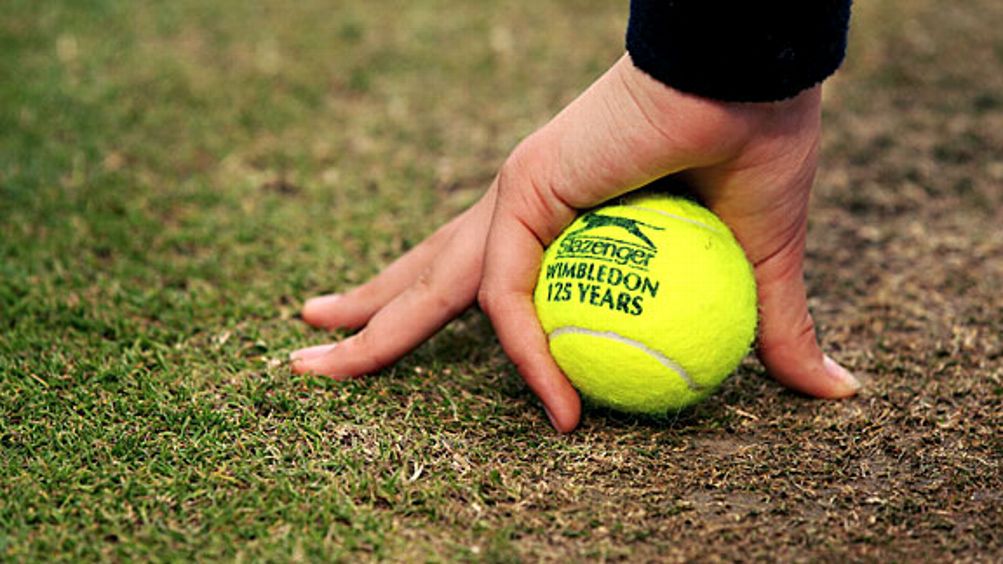 When Novak Djokovic hammered his racket against the ground after floating a backhand long during his match with Marcos Baghdatis on Saturday, I thought about the grass. More precisely, I thought about Robert Twynam and the grass. Twynam — the subject of a long and fond New Yorker profile by John McPhee — used to tend the sward on Centre Court at the All England Lawn Tennis and Croquet Club. Twynam was a peculiar man. He did not so much grow the grass as love it. “Mr. Twynam regards each blade of grass as an individual, with its own needs, its own destiny, and its own right to grow on this blessed piece of lawn,” McPhee quotes one person saying. Twynam was very small, with gray hair and a “sincere and reassuring” moustache. He wore a suit and tie. Apparently his preferred horticultural method was prayer. I don’t think he would have liked the sight of Djokovic’s intemperate display, his abuse of the lawn.

It’s hard to imagine that he would have enjoyed the rest of the match either. For instance, there was so much sliding! Djokovic spent half the game in the splits, as he tends to do. Twynam thought sliding was bad for the grass and bad for the game. “They all slide to a certain extent, but the great players don’t slide much. I mean, they know where the ball is coming, don’t they?” Twynam told McPhee. “These foreign players do a lot of sliding. Czechs. French.”

Wimbledon is an institution that denotes tradition and continuity, sincerity and reassurance.1 It is known as The Championships. The tournament runs over The Fortnight. The women are ladies, the men are gentlemen, and all of them wear white. The pressure on Andy Murray to win suggests the weight not only of a nation but an empire. (Will someone please tell him to shave?)2 Ian Ritchie, the chief executive of the All England Club, has even tried to get rid of the noxious grunting — demurely, of course. In a recent interview with The Telegraph, he said, “We have discussed it with the tours and we believe it is helpful to reduce the amount of grunting.”

Good luck. The world has changed and so has Wimbledon. The “foreign players” come from farther away; this year’s 3-seed was from China. Two African-American sisters have dominated the tournament for the past decade. There is a retractable roof on Centre Court where once there was only the sky. No longer must competitors bow to the royal box. The balls are yellow now, and the rackets are not wood. Victoria Azarenka will blare like a siren until she is beaten.3 The crowds jeer and do the wave. Men and women earn equal prize money. Is nothing sacred?

Not even Twynam’s beloved grass! A decade ago, after a particularly dull serve-and-volley final, the All England Club tore out the grass and started over. It planted 100 percent rye instead of a mix of 70 percent rye and 30 percent creeping red fescue. The rye stands straighter and slows down the ball, and it keeps the soil drier and harder, letting the ball bounce higher. It used to be that when the ball hit the sward it skidded and sped. That kind of bounce favored a serve-and-volley game — players who could close out the point as quickly as possible, since the fewer times the ball hit the ground, the better. Now that players have more time, it’s safe to stay back. Instead of trying to hit a service return around their ankles, they can whack it from the strike zone around their waist and then wait to see where the shot comes back.

There has been some handwringing over the reluctance of servers to rush the net. The change has replaced one kind of predictable point with another: the topspin baseline game. Have the wars of attrition of the clay courts in France reached the greens of England?

Perhaps. The balls are usually still a little slower at Wimbledon, the points constructed, but the court still shows the pattern of play in its wear. The green stripes in the front court may still be sharp, but as the second week begins, a patchy dirt track runs along each baseline, like the worn knees of corduroy pants.

In his profile of Twynam, McPhee asked the groundsman about how the professional players would fare at Wimbledon (the tournament had been an amateur affair). Twynam was hesitant, uncertain if the pros could handle the ball’s pace on grass. Then he suggested that they take a look at Centre Court. Twynam opened the doors of the players’ entrance onto that blessed plot. There are two lines written above the doors: “If you can meet with Triumph and Disaster / and treat those impostors just the same.” McPhee took note of the words and added: “Words that might ask too much of a pro.”

The lines are from “If—,” by Rudyard Kipling, published in 1910. British polls still routinely rank it as the nation’s favorite poem. The poem was co-opted almost from the start, reprinted on postcards and pillows, and turned into a sentimental plea for Victorian virtue. But “If—” is also troubling. It commemorates the life of a man who led a failed raid against the Boers, a disaster that helped set off the Boer War.4 This is where the tendency to use military analogies to describe tennis breaks down, where it starts feeling weird to call an approach shot an “attack” or, for that matter, a volley a “volley.” Kipling wrote the poem to encourage his son to be great and brave; his son was killed in World War I. Woodrow Wilson, who led his country into that destructive war, carried a copy of “If—” in his wallet.

A promotional video for the 2008 final between Federer and Nadal featured the two players reading “If—” aloud while the screen showed slow-motion shots of their ball tosses and stoic glances.5

If you can make one heap of all your winnings
And risk it on one turn of pitch-and-toss,
And lose, and start again at your beginnings
And never breathe a word about your loss;
If you can force your heart and nerve and sinew
To serve your turn long after they are gone,

The literal-minded might think that these lines suit tennis very well. Winnings! Loss! Toss! Serve! But of course this is absurd. Tennis isn’t war; what’s risked is a nice win streak.

Baghdatis is from Cyrpus, Djokovic from Serbia. They hardly need me to tell them what is and what isn’t war. Still, it was enthralling to see them out there, battling (that word!) at deuce in the last game of the match. At the end of one long rally, Baghdatis with a break point, Djokovic pulled his opponent off the court with a sharply angled inside-out forehand. Baghdatis reached it and Djokovic sent it into the ad court. Baghdatis lunged and flicked it back, scrambled to recover and run down Djokovic’s crosscourt backhand. He slid the length of the ad box, slicing the ball. Djokovic sent it crosscourt the other way, and Baghdatis sprinted and slid again. His forehand floated just wide. He was well behind the baseline. The quality of play during the match was not exactly inspiring, nor was Djokovic’s temper. But the crowd was on its feet. The players nearly dropped from exhaustion. The second week was about to start. The better competitor would soon pull the match out. The pros did all right.

Louisa Thomas is the author of Conscience: Two Soldiers, Two Pacifists, One Family — A Test of Will and Faith in World War I.