What Happened at Brian Holloway’s House? 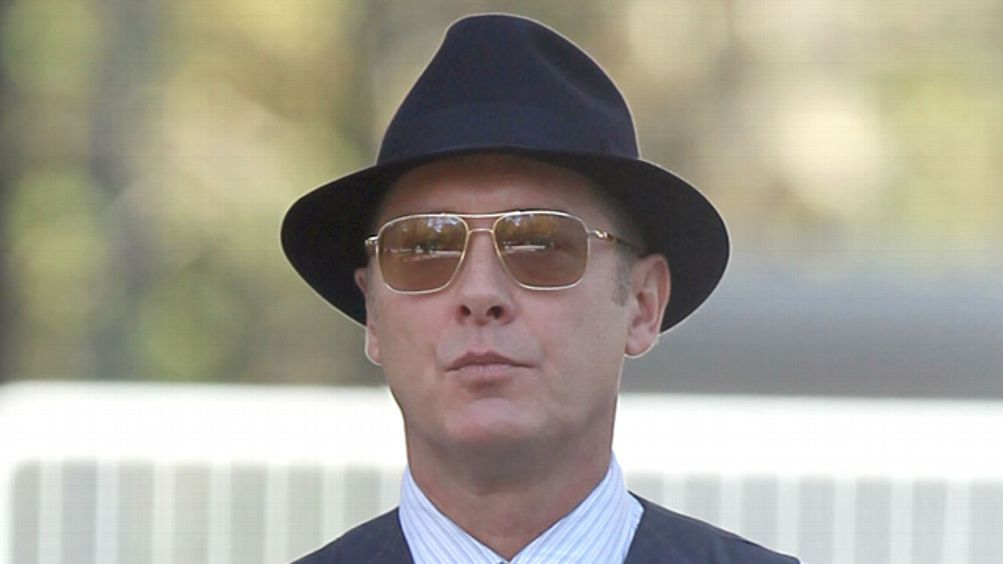 No one on TV is having as much fun as James Spader. As Raymond Reddington, the supercriminal turned wisecracking informant who fronts NBC’s The Blacklist, Spader positively glows with ruddy amusement. Clad only in the finest silks, his ginger locks shorn to stubble and hidden beneath a wide-brimmed Borsalino, Spader plays Reddington as a cool, colorized Harry Lime; he’s a rule-bending overconfidence man who loves playing all sides because he knows full well the game is fixed. (How does he know? Because he’s the one who’s been fixing it.) Spader has always been a remarkable ham but, at 53, he’s aged into an otherworldly ibérico. The way he delicately nibbles every inch of the scenery on The Blacklist reminds me of Tom Hanks going kernel-to-kernel on a piece of baby corn in Big. He’s feasting not to get full but simply because he loves the taste.

Spader is the star around which all of The Blacklist orbits, its robust ratings glow a testament to his undimmed appeal.1 Under normal circumstances, there might be a legitimate concern about such a sybaritic performance also functioning as a sort of series black hole, gobbling up all the light and life that surrounds it. But with The Blacklist, that’s hardly an issue. If Spader weren’t eating everything in sight, the audience would surely starve. The Blacklist is a noisy and ugly hour, the insanity of its plots only matched — and undermined — by the severity of its tone. Instead of rising to meet Spader’s slithery performance, the series stoops to get out of his way.

This is an enormous shame. The Blacklist, on paper and in James Spader’s frothy imagination, is a pop cartoon, a gleefully nutso celebration of pulp. It’s the tale of a snarky global supervillain who teams up with a spunky junior G-woman to foil the mustache-twirling, globe-imperiling machinations of characters named the Stewmaker and General Ludd. Spader’s Reddington is that supervillain — he’s a former military man who first went AWOL and then went YOLO — and he’s had dealings with all of them. And now, for reasons he has yet to elucidate, he’s ready to sell them all up the river. (The titular Blacklist is his dossier detailing each and every one of these ridiculously named, highly lethal baddies.) By any standard, this is a clean and clever framework for a network series, one that can stand alone week to week and still manage to weave larger, overarching narratives. Our reality is dominated by comic-book culture, and here is an elaborately imagined, wholly original fiction that operates under similarly melodramatic rules: no capes here but plenty of peril. It pairs Lex Luthor with Lois Lane and pits them against a fearsome rogues’ gallery that stretches from Earth to Krypton. And yet other than Spader, The Blacklist plays everything straighter than Clark Kent.

Around his gaudy lead, series creator Jon Bokenkamp has assembled an unprecedented quorum of bores, a murder of stiffs the likes of which is rarely glimpsed outside of a morgue. Homeland‘s Diego Klattenhoff, blessed with the stillness and range of a redwood tree, plays a no-nonsense FBI man named Ressler. As his even less-nonsense boss, Harry Lennix makes Klattenhoff look like a yoga instructor in Venice Beach. (Spader doesn’t need to be protected like this. He’d stand out even at the Smithfield Factory.) With its endless cycle of tracking, hacking, brow-furrowing, and punching, The Blacklist manages to make crime-fighting seem both silly and dull. It presents a world that barely seems worth the effort to save it.

It doesn’t help that Elizabeth Keen, the aforementioned G-woman played by Megan Boone, combines Clarice Starling’s personality with the doomy backstory of Electra. I suppose some tsuris can be forgiven since the show’s boisterous pilot launched Keen from a rookie profiler with a snug boho brownstone lifestyle to the pistol-packing, handpicked interlocutor of a global mastermind. In the ensuing weeks, she’s seen Tom, her husband, tortured and outed — and then inned — as a homicidal secret agent. She’s had to shoot Robert Sean Leonard and emote opposite Klattenhoff. Vehicles explode around her with uncanny frequency.

All of this adds up to the type of drastic life change that can certainly feel like a burden — though I can’t imagine it’s any worse than being married to a wet noodle like Tom — but it should never feel this heavy to the audience. From my vantage point, Keen has traded up: Instead of walking the dog and mooning over color swatches with Tom, she’s now tap-dancing on the third rail of international danger, cracking codes for Chinese thugs, and getting into fistfights in public restrooms. Just once I’d like to see a character elevated by a sudden circumstance, not overwhelmed by it.2 That Redd is so obviously Keen’s father3 provides emotional ballast, sure, but it also suggests an opportunity to allow the straitlaced Keen to experiment with the kicky humor that is her inheritance — and that is desperately needed. When her alternate career path is illustrated by the snippy Parminder Nagra — who whiles away the hours “checking with her sources” and refusing to crack a smile — slipping the bonds of society with Spader doesn’t just seem fun, it feels like the only way to stay sane in a deeply crazy world.

Because come on: The Blacklist is bananas! In its far-from-reality, the Chinese have drilled spy tunnels beneath our cities, criminals stash ransom notes inside of chest wounds, and alcoholic Germans build cars that are bombs.4 Reddington isn’t just the best-dressed baddie, he’s also the best connected: The Blacklist suggests a world run not by governments or commerce, but by a conniving cabal of wackos with incredibly unimaginative nicknames.5 (To its credit, the show hires fine actors to fill these guest roles, from Leonard to Tom Noonan. Unfortunately, Spader doesn’t leave much oxygen for them.) A recent episode centered on a nightclub owned by a radical-chic Frenchwoman named Madam Dechambou. This ought to have been a racy treat, but The Blacklist played it like the breakfast buffet at an insurance convention. The closest the show has come to a joke is when Keen ended a conversation with Redd by plunging a ballpoint pen into his neck. The second closest is when a character greeted Redd by saying, “Speak of the devil, it’s the devil.” (That last one is actually pretty good. The producers must have agreed: They repurposed it not two weeks later.)

Network procedurals of all stripes require a constant, implausible flood of inciting incidents. It’s something viewers have learned to accept even though it meant sleepy Cabot Cove was, for a time, the murder capital of the world. But the sheer size and scope of the weekly happenings on The Blacklist beggar belief: Massive terror attacks are as common as thunderstorms, sentencing hearings erupt, almost casually, into gun violence, and airplanes fall like hailstones from the sky. While the implacable Redd flits around the edges of the A-stories, dropping bons mots and jetting off to Havana — for what it’s worth, there’s a difference between clever unflappability and boring omniscience, and the show does not seem to be able to locate it6 — Keen’s Goof Troop is left to stomp around drab D.C. stoically Doing Their Jobs (read: talking into walkie-talkies, tapping animatedly into laptops, squinting). But why this strange, slavish devotion to accuracy and professionalism? These people live in a clown factory. Embrace it!

TV has been struggling with reality for a while now — and I don’t mean in the Real Housewives of Jeff Probst sort of way. Yes, the rise of Survivor and the billion competition shows it spawned affected network real estate and the corporate bottom line. But the rise of adult-themed dramas on cable moved the goalposts for the traditional broadcasters in a way they’ve yet to recover from.7 For all of its grace and ambition, Hill Street Blues could never go as deep as The Wire. The adrenaline rush of ER never matched the serotonin highs and lows of Breaking Bad. Unable to duplicate the specificity and subject matter of cable, network dramas have mostly retreated into formula (NCIS ad infinitum) or plunged into genre (Grimm, Fringe, etc.). Whenever one of the big four has explicitly attempted to mimic the ambition of a cable show — which, thanks to commercial regulations, must be done inexplicitly — the result has either amped up the body count at the expense of the humanity (The Following) or been quickly euthanized (Lone Star). As much as I want quality on all corners of the dial, I can’t say I blame the networks for mostly forfeiting a game they can’t win.

Yet I think there’s a more subtle problem as well, one that can be connected not just to the more realistic version of reality peddled by cable but by reality-reality — you know, the one happening right outside our windows. The first decade of the 21st century was marked by extremes of terror and violence abroad and, devastatingly, at home. One of the results has been an increase in graphic storytelling but also a newfound heaviness to accompany it. The relatively breezy Law & Order begat the midnight-dark SVU. CSI never found an exit wound it couldn’t salaciously enter. Whenever blood was spilled or terrorism was invoked, it carried with it a well-meaning, self-imposed pressure to “get it right” — even though that’s exactly the sort of goal that usually causes writers to get it very, very wrong. Taking death seriously is one thing. But to divorce death from all the things that make life worth living — including humor, silliness, and warmth — cheapens it in a profound way. This dour negation is like a thread running through TV drama, from the hyperactive machismo of 24 to the cerebral plodding of Homeland and then looping back and tying showrunners in knots.

And so The Blacklist, like most network hours, ends up stuck in a creative no-man’s-land: not smart enough to elevate its subject matter and not honest enough to know (and celebrate) its limits.8 The show’s violence is relentless and vast: Last week’s installment included multiple scenes of civilians being gassed to death and, as a fellow critic pointed out yesterday on Twitter, the past two episodes have featured a child being murdered before the opening credits have even rolled. I suppose that Agent Ressler’s clenched jaw and Elizabeth Keen’s anguished squint are meant to somehow serve as both justification for and side effects of this bloodshed, just as Raymond Reddington’s flippancy is meant to be a shocking counterweight. But The Blacklist isn’t nearly as clever as its shady antihero, and its balance is sorely out of whack. It’s a light entertainment playing dress-up in a coroner’s closet. I’ll admit that Spader looks fantastic in a suit. It’s just too bad that everything around him is DOA.