The Mysterious Death of Sammy Wanjiru 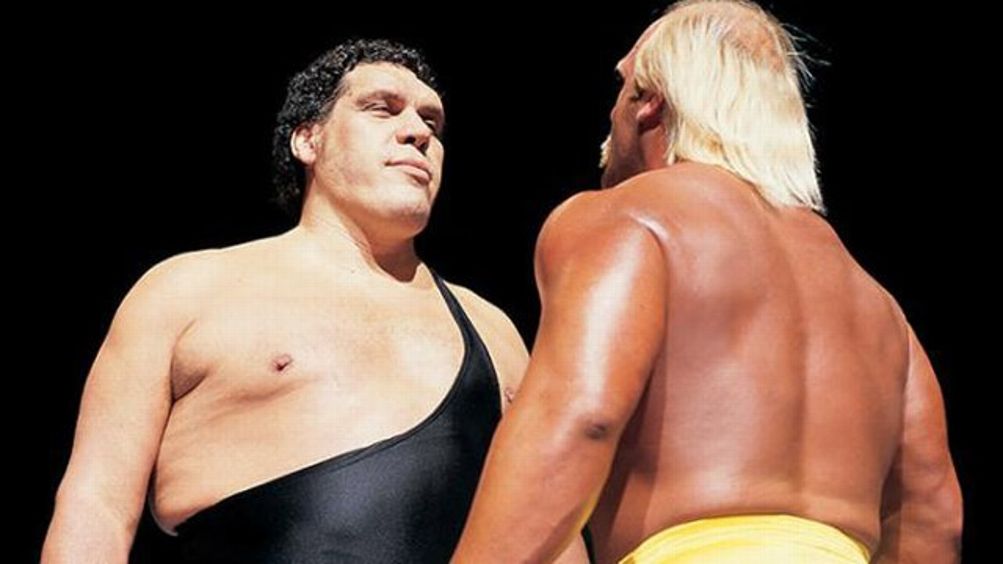 WrestleMania III, which was 25 years ago today, featured more than two matches — a whopping 12, actually — though you’d hardly know it to hear most modern recollections of the night. Hell, WWE’s documentary on the history of WrestleMania only mentions two matches: “Macho Man” Randy Savage versus Ricky “The Dragon” Steamboat and, of course, Hulk Hogan versus Andre the Giant. There were memorable moments all over the card: Aretha Franklin sang “America the Beautiful”; Junkyard Dog absconded with “King” Harley Race’s crown and robe; Tito Santana awkwardly disrobed his dastardly manager Slick; Hercules Hernandez and Billy Jack Haynes met in what amounted to a contest of steroid cycle timing; Hacksaw Jim Duggan, at his jingoistic pinnacle, refused to allow the singing of the Russian national anthem; Brutus “The Barber” Beefcake performed his first haircut as a good guy; Alice Cooper helped Jake “The Snake” Roberts handle his snakes; and King Kong Bundy committed a little-person hate crime against a guy called Little Beaver. As inimitable color man Jesse “The Body” Ventura — arguably at his peak that night1 — said during the event, “When you’re at WrestleMania you take what you can get.”

Savage-Steamboat and Hogan-Andre, however, were the matches that made history. If WrestleMania I was an act bordering on financial malpractice (none other than Vince McMahon has said that if it hadn’t been a success, he would have been out of business) and WrestleMania II was one of technological recklessness (they split the card between New York, Los Angeles, and Chicago and depended on satellite synchronicity in an era when it was nearly impossible to achieve), then WrestleMania III was when the WWF finally found its stride as a myth- and moneymaking machine.

The high point of the show for everybody watching in real time was the Hogan-Andre match. These two had long been friends — for the record, they were only friends insomuch as all the good-guy wrestlers were friends back then, though to a young WWF fan familiar with their jovial interactions in the Hulk Hogan’s Rock ‘n’ Wrestling cartoon, that meant something — but then Andre decided he didn’t like being overshadowed by Hogan. It all came to a head on an episode of Piper’s Pit, when Andre was given a trophy for his 15-year undefeated streak2 and Hogan received a (bigger) trophy for his three-year reign as champ. Hogan, who was frankly an incredible dick in his acceptance speech, was stunned when Andre walked out on the ceremony; when Andre next appeared on Piper’s Pit, it was with his new manager, Bobby “The Brain” Heenan. Andre tore off Hogan’s T-shirt and crucifix3 and initiated an unthinkable heel turn.

The oft-told behind-the-scenes story here is almost as good as the on-screen one: Andre, who had been a special-attraction fan favorite throughout his career, and who had broken down physically, nearly to the point of retirement, was convinced by Vince McMahon to play the bad guy in what would presumably be his last high-profile storyline. It was a bold move by McMahon and a brave acquiescence by Andre, because if fans rejected the transformation, Andre’s would lose his reputation and the WWF would lose all the money that reputation would have earned. But the ploy worked beautifully, largely thanks to Andre’s impenetrable, stone-faced presence during the lead-up to the match. He looked brainwashed, as overcome by the new boos he was hearing as by his grievance with Hogan. Hulk, for his part, was physically overmatched for the first time in his career. Wrestling fans like their heroes to be supermen or underdogs, and for the first and only time in his career, Hogan was both archetypes at once.

It’s hard to describe the significance of this feud at the time, but it was somewhere between Ali-Liston and World War II. Imagine a Super Bowl quarterback matchup between Peyton Manning and Darth Vader and you’ll get a tiny hint of it. The wrestling itself was nothing spectacular — both men were great showmen, though neither was even a competent grappler at that point — but the hype and the drama were enough to fuel the encounter. When Hogan body-slammed Andre, the 93,173 people packed into the Pontiac Silverdome4 simultaneously screamed in wild passion. The semi-apocryphal backstory is that Hogan was in-real-life petrified going into the match because he knew that he couldn’t lift Andre without Andre allowing him to, and Andre had notoriously idiosyncratic motivations. And, despite the fact that Andre had technically lost before, Hogan’s fear was well-founded. Andre may be the only wrestler in history whose losses were faker than his wins. If they got into the ring and Andre decided to rewrite the script and make himself the victor, there was little Hogan could do to stop him. After the match, Andre glared at Hogan celebrating in the ring as he stood, perplexed, in the parade-float-style mini ring that was ferrying him back to the locker room. The whole post-match sequence lasted almost seven minutes, but it felt like forever, in large part because announcers Gorilla Monsoon and Jesse Ventura were left nearly speechless by an outcome that they knew was coming. It was that big of a moment.

If that bout was the ego of the WWF’s golden age, an earlier match on the card was its id. Intercontinental Champion “Macho Man” Randy Savage and Ricky “The Dragon” Steamboat had been feuding for six months, since Savage brutally attacked Steamboat by jumping off the top rope and drilling Steamboat in the throat with the ring bell. A couple of unintentionally hilarious videos of Steamboat being forced to re-learn how to speak followed, and, after he returned to active duty, the two figured in a number of violent brawls. The WrestleMania match was 15 minutes long, but it seemed longer. Every move was careful and deliberate, every sequence was meticulously plotted out, and it resulted in something like the Platonic ideal of a wrestling match. Unlike Hogan-Andre, Savage and Steamboat were pure athletes. They smartly played to that strength, and let Miss Elizabeth (in Savage’s corner) and George “The Animal” Steele (in Steamboat’s) do the overacting. The match is rightly regarded as one of the best of all time, not only in WWE but in all professional wrestling.5 The most incredible thing about the match wasn’t just how great it was — it was its place in wrestling history. As the years wore on, as wrestling tastes evolved, and as Hogan’s run became monotonous, one legend faded and another emerged: that the Savage-Steamboat match stole the show. Steamboat and Savage were originators for a new generation of wrestlers and wrestling fans compelled not by wrestling as a struggle between cartoonish good and bad guys but by its athleticism. They didn’t become myth; they became scripture.

On Sunday night, Miami will host WrestleMania XXVIII and WWE will embark on their annual attempt to re-create the magic of that night 25 years ago. John Cena and The Rock will square off in a battle of generational icons. It’s a tidy approximation of the Hogan-Andre magic, although it lacks the potential for physical calamity that Andre brought to the Hogan match. It’s fair to say that, despite the monotonous buildup, this WrestleMania match is rivaled by only Hogan-Andre, Rock-Hogan, and Shawn Michaels-Undertaker in terms of pure, timeless appeal. On Sunday night, Rock-Cena will feel epic because it will be epic, and even the most unspectacular WWE buildup couldn’t botch that.

The bigger question is whether this match will stand the test of time. The Rock looked sharp in his Survivor Series match, although his time in the ring was limited and carefully choreographed, and Cena is almost always excellent on the big stage. What they need is a Hogan-slamming-Andre moment, something fans will remember forever. Cena went on at length Monday about how important it was to win, but that matters less than how the match is fought, and how it is won, and how important the win feels.

I think it’s safe to say that the Hell in a Cell match between The Undertaker and Triple H won’t have any shortage of big moments. If you look at their match last year and at Hell in a Cell matches over the years, it seems likely that we’ll witness a series of big moments strung together by grizzled stare-downs. Part of the storyline here was that Triple H, as an on-screen (and real-life) WWE executive, was reluctant to take the fight because he thought he might damage the Undertaker “brand.” In reality, it’s all the more reason to expect a battle of capacious stunt work. It’s likely that this will be Undertaker’s last match, and even more likely he’ll win, elevating his WrestleMania record to a neat 20-0, but even if the ending isn’t really in doubt, the journey will be harrowing. Both men know that the match’s legacy will be tied up not in its outcome but in how well it can be preserved in WWE highlight packages, where big moments reign supreme.

The CM Punk-Chris Jericho match for the WWE Championship may have just as much built-in anticipation as the others, but in an entirely different way. These guys aren’t larger-than-life crossover stars like The Rock or Cena or even Undertaker. But Punk and Jericho’s original beef was based on who was the “best in the world,” and just about every fan will be watching on those terms. What’s at stake in this match isn’t just the title, and it certainly isn’t the prospect of a Hogan-Andre moment. It’s the promise of a Savage-Steamboat-style classic. Jericho speaks almost romantically on the WrestleMania documentary about how that match affected his career and his personal ambition. Punk, for his part, was mentored by Steamboat when they crossed paths in Ring of Honor, and Punk turned his first match after Savage’s recent death into a tribute, donning similar tights to the ones Macho Man used to wear and adopting Savage’s iconic elbow drop. For Jericho and Punk, Savage-Steamboat is the goal; wrestling fans certainly hope that they can pull it off. If the match ends with a small-package roll-up — as did Savage-Steamboat, which is almost unbelievable considering the match’s place in history — we’ll know exactly what Punk and Jericho were thinking.

As singularly epic as the Hogan-Andre match was, and as technically perfect as the Savage-Steamboat match was, if somebody asked me to show them one match off the WrestleMania III card that symbolized the whole night, and the whole era, part of me would be tempted to go with Jake “The Snake” Roberts versus The Honky Tonk Man. They were two of the very best talkers in the game, two guys whose crowd response almost always outstripped their spot on the card, and two guys who legitimately seemed to hate each other. And between Jake’s pet python and Honky Tonk’s weaponized acoustic guitar, it was a sure thing that the match would end with some kind of spectacle. (Fans would end up being blessed with the deployment of both.) There was nothing particularly special about the match itself, outside of its big-show feel. But unlike Hogan or Andre, if you saw Jake The Snake or Honky Tonk Man the street, nothing about these potbellied, mulletted men would make you think they were superheroes in their work life. At WrestleMania III, however, they were pure, nuclear-powered magic. In a sense, that was the most capital-P Pro Wrestling match of the event. It’s like being in the Met and running across a Dutch Master painting that’s not by any painter you’ve ever heard of, but it’s hanging on the wall because it’s the most representative example of a certain aspect of the movement — it’s not famous, but it’s an iconic specimen.

Filed Under: Celebrities, The Rock