The Inquisition of Mr. Marvel 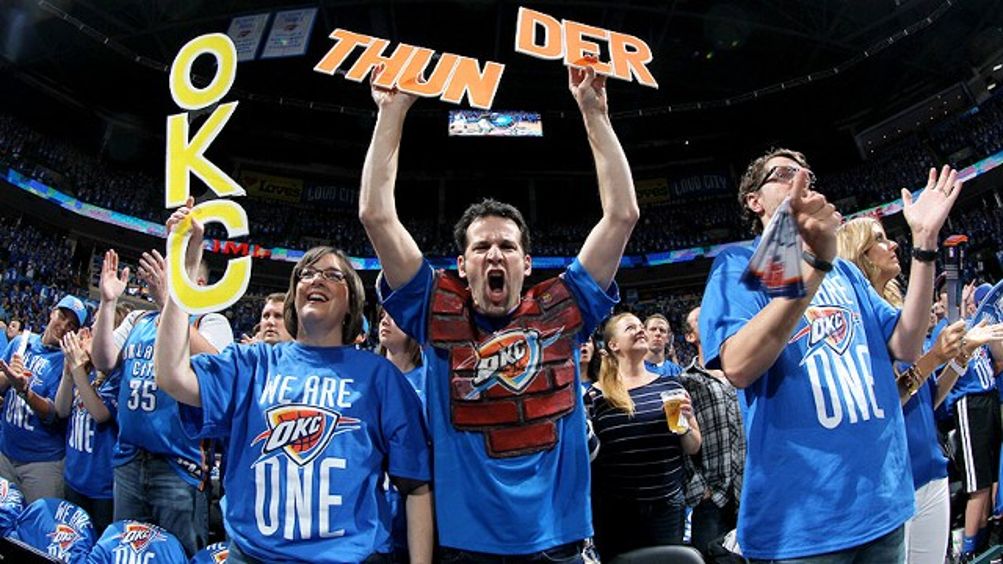 So, last Saturday I came back from a Kentucky Derby party all pleasantly sideways on juleps and proceeded to watch James Harden do unspeakable and hilarious things to knock the Mavericks out of the playoffs, and I thought, God, it would be terrible not to be able to enjoy this.

And bam, there you were. Now, I spent a long time, Seattleite, trying to keep you out of my head, working to forget you ever existed so I could enjoy being a Thunder fan. (More on this in a minute.) Lately, though, you keep showing up in my cozy-happy fan-burrow — not constantly, but in brief flashes in the background of my brain, like the little girl in the horror movie who’s there in the mirror for 0.02 seconds. I keep feeling … not exactly guilty, but that sort of half-theoretical queasiness you get when you know you’re enjoying something mostly unimportant (sports) on the back of someone else’s mostly unimportant (sports-related) suffering.

I feel awful about this. I really do.

Don’t get me wrong here: I also feel absolutely fantastic. I grew up in Oklahoma during a time — that time ranging from “before the dawn of creation” to “circa 2006” — when the idea of having a top-line professional sports team within our state borders seemed about as plausible as starting a surfing academy in Tulsa. We were a college-sports state, not because we chose to be, but because we didn’t have the numbers or the money to make a googly-eyed billionaire pay any attention to us. NBA franchises don’t just fall from the sky when you live in flyover country. Where I grew up, the nearest one was a six-hour drive away.

There’s more than one way of suffering for sports — that’s my point here, Seattleite. There’s the one people talk about, where you stick it out through thick and thin with a team that’s two subway stops from your house. There’s also the one people don’t talk about, where maybe you love a game a lot, maybe for a long time, and have to resign yourself to the fact that seeing it played on a high level, in person, is just not in the cards for you. And sure, that’s why the universe gave us TV. And who knows, maybe you take a trip to a sports town every now and again, when you’ve saved up enough or when you can swing a vacation from the cracker factory. The town on the jerseys is always somebody else’s, though.

Lot of people in that situation, Seattleite. America’s a big country, and there are dark zones on the major league map into which few explorers dare go.

So when an honest-to-god NBA team somehow landed in my home state, a stone’s throw from my parents’ house? And — wait a second — they were good? They had a young, mesmerizing, scoring-champion-class talent? They had (it’s time somebody said this) the greatest beard in the history of professional basketball? You’d better believe I was onboard. For the first few years, I didn’t want to hear a word about Howard Schultz, KeyArena tax proposals, or Aubrey McClendon’s red-hot e-mail account. I just wanted to watch Durant sink stick-figure jumpers from the top of the key. I wanted to giggle with glee at the sight of Harden splitting two defenders before gliding in for one of those weightless-till-the-monster-drops-it dunks. The Internet could talk whatever trash it wanted about the “zombie Sonics” and the wrongs done to the soul of Eddie Vedder. I had an NBA team [Author’s note: !!!] and I was going to enjoy every minute of it.

The problem, Seattleite, was you — those flashes I kept having. You don’t need me to tell you this, you might even be insulted that I’m writing it down, but it sucks that you don’t get to enjoy this team. In a way, only a Thunder fan can know how very much it sucks, because we’re the ones who do get to enjoy it.

So I’m wondering, and I’m hoping we can figure this out: What do fans owe each other in these situations? Empathy? Something more than empathy? Should I send you a card? Part of the problem is that — you having recently lost a sports team and I having recently gained one — we’re both standing at an unusually sharp angle to the question, What the hell is a sports team, anyway? What are we supposed to be able to expect?

I think about this a lot because, as a soccer guy, I’m constantly running into differences in the way the “sports team” concept functions in America and the rest of the world, differences that are often mildly startling, even though we’re all pretty friendly on Twitter. In England, e.g., soccer clubs are seen as something like community institutions — not businesses interchangeably situated in arbitrary cities, but deeply rooted expressions of the identity of the place where they began. It almost never happens that a club moves cities, and when it does (cf. Wimbledon to Milton Keynes, 2004) you would think the world was ending in fire by the way people talk about it. Over the past 20 years, club owners have increasingly started acting like American-style profiteers rather than the responsible civic stewards they have traditionally been expected to be, and this has led to serious anger and protest. I mean real protest, the kind we tend to reserve for stuff like wars and TV-show cancellations. This is not a joke.

In the USA, obviously, that ship has pretty mercilessly sailed. We’ve mostly gotten comfortable with the idea that sports is a business. We’re happy to call our clubs “franchises” (essentially profanity in England), we talk about games as “product,” we memorize cap restrictions and contract details, we fiddle with the Trade Machine. We accept that players are going to play harder in their contract years. Most of the conversations I had after the Dwight Howard/SVG blowup last month involved analyzing the fallout potential for Dwight’s “brand” — and this was with young and youngish sports fans and writers, people who were not obviously cynical or soulless. It’s just the resting state of the culture at this point. We’re used to interacting with our games as though we were part of the fantasy-entertainment industry that runs them. We are not naïve about sports, unless it’s naïve to think that savviness about the ways in which we’re being exploited makes us unexploitable.

So … yeah. We recognize that sports teams are mostly dumb corporations that don’t care about us, which is why our outrage at their corporate-like behavior tends to be inconsistently applied and limited to specific cases. (Otherwise we’d have to be angry all the time.) In a way, it’s weird to be just FURIOUS about the Zombie Sonics and totally at peace with the Zombie Lakers or the Zombie Dodgers or the Zombie Every Other Team That Abandoned Its Original Fan Base for Money. Yes, what happened to you, Seattleite, was somewhat worse, because of how it all went down, than what’s happened to millions of other fans, but it wasn’t a different kind of thing. Just a bigger fish from the same bad pond.

What I’m saying here is, it’s disingenuous to live in the world of product and branding and @KingJames six days a week and then get mad about loyalty and community on Sundays. But it’s as if we need the occasional issue on which to vent our subliminal resentment toward the Nike model just to remind ourselves that there is a loyalty-and-community dimension here, even if it mostly exists in memory and fantasy. Because if there isn’t, then what the hell is a sports team? Which is the question I keep coming back to, now that I’ve got one.

What I’m absolutely sure of here is that none of the foregoing makes it any less painful to lose a franchise you’ve followed your whole life than it is delightful to gain the franchise you’ve never had but always wanted. Complaining about Clay Bennett may be like complaining about the weather — and no one knows better than you how futile that is, Seattleite — but there’s got to be some tiny kernel of identification in realizing that we’re all basically powerless to affect the forecast. That is, as long as we’re choosing to participate in this bullshit economy of sales-tax stadiums and leagues that work for owners and not fans, we’re all riding exactly the same roulette wheel. (I’m picturing a roulette wheel that’s actually kind of a goofy Rube Goldberg device in which the ball rolls out of David Stern’s mouth and down his comically extended tongue, but fill in your own details.) This week it screwed you over and helped me, next week it’ll screw me over and help some prospective future diehard of the Peoria Sphinx-Moths. A blizzard in Pac-12 country becomes a rainstorm in the SEC. We are all united in helplessness together.

And if it’s not too unutterably cheesy, maybe that’s what we owe each other — to see it that way, to sympathize with one another. Loving a sports team always means giving your heart to something that could harm it. And for all our pretend MBAs, that’s doubly true in America, where a team can kill you by losing and then kill you again by skipping town in the middle of the night. What we all have in common is that, for whatever reason, we choose to take the risk.

I’m going to enjoy every moment I can of the Thunder’s playoff run, but I’m not going to try to forget you anymore, Seattleite. Instead, when I’m happiest about Durant and Westbrook, I’m going to try to see you in the mirror — even if it’s only for 0.02 seconds.