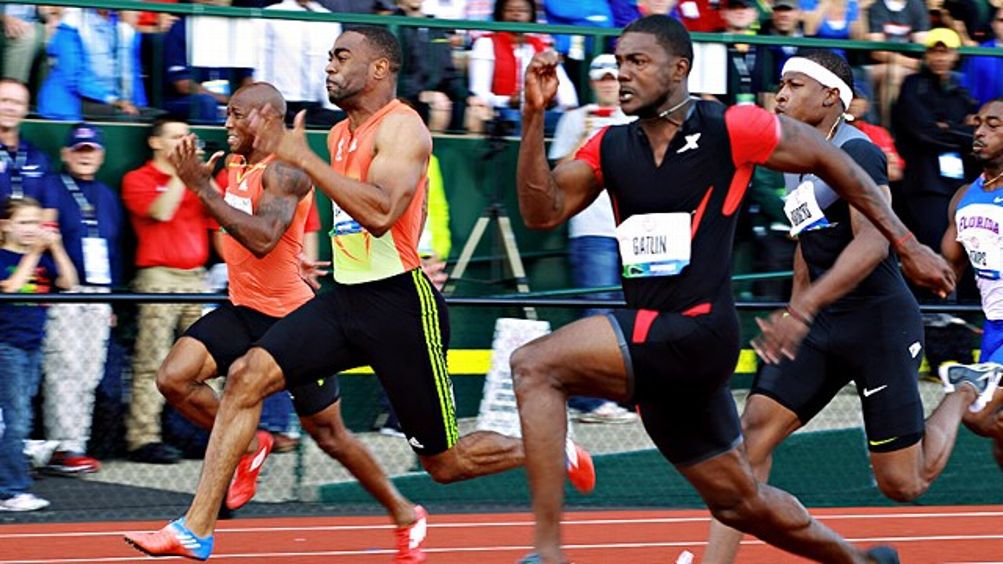 My favorite news story of the past two weeks was the one in which it was revealed that trainers had taken to doping their racehorses with a substance found only on the back of the waxy monkey tree frog, a heretofore unknown South American amphibian that probably has an agent and three lawyers working for it now. This, I thought, was the perfect solution to the mania we’ve all gotten ourselves into over performance-enhancing drugs. Let anyone take anything they want to enhance their performance, I say, as long as they have to lick it off the back of a South American tree frog, preferably on TV, immediately before they take the field. Not only would this give the athletes pause, I believe it also would be great television.

The one thing you can say for PEDs is that, at the very least, they completely blow up the made-for-TV, up-close-and-personal, artificial melodrama that has entombed the Olympic Games ever since Roone Arledge decided that the Olympics were not sport, but a 21-day drama festival, and ever since the late Bud Greenspan awoke one morning and decided he was Homer. Since those two black moments, every Olympic year has been encrusted with athletes whose obvious physical abilities are not thought to be nearly enough to entertain what appears to various television producers to be an audience full of saps. To enjoy the Olympics, it seems, we have to have athletes running for dead grandparents and for crippled coaches. To enjoy the Olympics, it seems, we have to have athletes struggling back from injuries, from illness, from poverty and despair and enough stark human tragedy to bring Eugene O’Neill back from the dead.

Television knows how to tell those stories. Television can tell those stories in its sleep, and occasionally appears to be doing that very thing. But how does television tell the “comeback” story when the athlete is making a heroic comeback from punishment for triggering our self-righteousness by committing the worst of our modern athletic sins?

Yesterday, on the first weekend of the United States Olympic track and field trials, on a sun-splashed day at Hayward Field at the University of Oregon, which is what St. Peter’s Basilica would be if Michelangelo had worked for a shoe company instead of a pope, Justin Gatlin cold-stomped the field in the men’s 100 meters, finishing in 9.80 seconds, ahead of both Tyson Gay and Ryan Bailey. This completed a remarkable weekend for Gatlin, who won the Olympic gold medal in this event in 2004, and then the world championship in 2005, the latter by the largest margin ever. (Gatlin also won the 200-meter world championship that same year.) A year later, he tested positive for a testosterone precursor. Ultimately, he was suspended from competition for four years. And that, as he waved the flag and the bouquet of flowers as the Olympic Trials champion yesterday, is what Justin Gatlin is coming back from. Take it or leave it — and I, for one, will take it — he ran the fastest 100 meters ever run by 30-year-old man.

“It was a blur. I don’t even know what happened in the race,” he said afterward. “A lot of people say that the comeback is here, but I think [it isn’t yet], until I make it to that podium at the Olympics and I do what I’m supposed to and fulfill my dreams.”

(If you’re looking for actual drama, keep an eye on defending Olympic hurdles champion Dawn Harper, who is visibly pretty well fed up with all the attention Lolo Jones has been getting for (a) being one of NBC’s darlings, (b) being easy on the eyes, and (c) not having won a damn thing compared to Dawn Harper, who’s had to come back from serious leg injuries to do it. Harper beat Jones from here to there on Saturday, and yet it was Lolo, who finished third, who got most of the attention at the post-race press conference. There was so much obvious hostility at Harper’s end of the platform that it’s a wonder the table didn’t spontaneously combust. Asked if she felt underappreciated, Harper replied, “Definitely.”)

Gatlin had been a bubbly presence around the trials all weekend. He popped a 9.90 in his first qualifying heat on Saturday. That got everybody’s attention. He once again was the cocky, smiling guy who stunned everyone eight years ago in Athens. (He’s been tweaking world champion Usain Bolt all year, which may or may not be the best idea he’s ever had.) After his stunning race in his first heat, Gatlin said, half-kidding, “Whenever I feel I can run, I’ll run. I might have five more years. Where’s the next one? Brazil? I’ve never been to Brazil before, so maybe I’ll keep on running.” But he also managed to fashion his own story into the comfortable kind of comeback narrative with which American sports audiences have become inured. If that works to take the edge off the steroid hysteria — if we can agree as a sporting public that even taking the evil performance-enhancing devil’s foot potions is something not dissimilar to popping a hamstring or having your beloved grandma kick off before her time — then Justin Gatlin may have done the sanity of his country an immeasurable favor over the weekend.

But I still think he should have to lick the frog.

The best way to approach the Olympic trials — and, come to think of it, the best way to approach something like the Olympic Games — is to walk through them as a kind of living museum of athletic evolution. I was waiting out one of Eugene’s periodic downpours in the doorway of the huge Nike store outside the stadium when I realized that I was standing next to Billy Mills, whose upset victory in the 10,000 meters in Tokyo in 1964 not only is still one of the great stunners in Olympic history, but also was such a major historical event for Mills’s fellow Native Americans that they made a movie out of it, albeit one in which Mills was played by Robby Benson, who was approximately as much of an Oglala Lakota (Sioux) as Nikita Khrushchev was. (As a measure of how different things are today than they were in 1964, consider that NBC commentator Dick Bank got fired by NBC for being too enthusiastic in his call as Mills ran down Ron Clarke and Mohammed Gammoudi.) Over in the “mixing zone” near the press tent, Rafer Johnson stood with the other surviving American Olympic decathlon champions, including Bruce Jenner. It was 44 years ago this month that Rafer Johnson struggled in the kitchen of the Ambassador Hotel, trying to pry a pistol from the hands of a man named Sirhan Sirhan, who had just shot Robert Kennedy to death. Bruce Jenner is now married to a Kardashian. Times change. I am disinclined to say that we’ve necessarily come a long way.

The decathlon is resolutely old-school, though, no matter how hard the forces of mass commercial entertainment try to tart it up. (Remember Reebok’s ill-fated “Dan and Dave” advertising campaign back in 1992? It collapsed because the decathlon ate Dan O’Brien alive. He would come back to win it four years later.) It covers 10 events over two days, which makes it rather admirably television-resistant. The flashier events go on all around it, as the decathletes throw the discus, or leap the hurdles, or launch themselves in the pole vault. The scoring system seems to be put together using what Edward Norton in Rounders calls “gorilla math.” You have to be a serious track and field fan to follow the decathlon, and even a more serious track and field athlete to give it a go.

“I saw Dan O’Brien on TV, and somebody asked him, ‘What kind of person does a decathlon?'” said Olympic decathlon coach Harry Marra. “And he said, well, you have to be a little disturbed.”

Not a half-hour earlier, Marra’s athlete, Ashton Eaton, had set a world record of 9,039 points, a world record he did not have to set to win the competition here, or even to make the Olympic team. More than a few athletes confessed quite frankly that their goal here was to make the team and to escape the meet without an injury. Eaton, whose home track this is, was comfortably ahead going into the final event, the 1,500 meters, having won six of the nine previous events over two days in which a cold mountain rain periodically soaked the competitors. “As a decathlete,” Eaton said, “you get used to dealing with the elements. It’s just something else you have to get through. The weather is like the 11th event.”

Moreover, Marra had told Eaton that he was within striking distance of a world record, and Eaton made the considered decision to perform simply because that is what his home crowd expected him to do. He needed to run the 1,500 in a little over 4:16 to break the world record. As a final grace note, Joe Detmer and Curtis Beach both stepped aside to let Eaton finish 1.75 seconds faster than he needed to. (Beach even waved him by. In a picture of the finish of the race published in the local paper yesterday morning, Beach looks happier hitting the line than Eaton does, and Beach finished 11th.) “After the javelin, I said, ‘You need a 4:15 or something for the world record,” Marra said. “I told him, let’s go through the three-quarter mile mark and see if we’re around 3:27. If we are, then let’s go after it. Let’s be a decathlete.

“I can’t tell you how hard it is to put 10 events together, to just compete in the decathlon. Just to finish, if a guy finished first or 15th, it’s a great feeling. It’s not easy to get your butt kicked in one event and then come back and compete right away in another one, to get up and have to throw the discus or something. That’s a lot of life lessons right there.”

This is the 100th anniversary of the Olympic decathlon. The first one was won in Sweden by Jim Thorpe, and it was the last gold medal won by a Native American until Billy Mills ran everyone down 52 years later. Of course, Thorpe lost his medal because the incipient fascists who ran “amateur” sports back in those days took it away from him because of some semi-pro baseball he’d played. This was rather the “steroid” scandal of its time and, as the years went by, people looked at the whole deal as more and more ludicrous, until, in 1983, his Olympic medals were restored to his family and his name was restored to the Olympic record books. His last surviving children were in Eugene, hobnobbing with Rafer Johnson, who wrestled with an assassin, and with Bruce Jenner, whose life is a reality show. These are real stories, with not an ounce of homogenized corporate emotion to them. Justin Gatlin’s one, too. So is Ashton Eaton. They’re both as real as the sparkling rain that keeps falling here, even when the sun comes out again.