Editor’s note: This article appears in the Jan. 1 issue of ESPN The Magazine.

Being the world’s single biggest fan of the Rocky series, as well as the guy who repeatedly tried (and failed) to convince America that A) Sly Stallone ended the Cold War by knocking out Ivan Drago, winning over a Russian crowd and making the “If I can change, and you can change &#133” speech, and B) “Rocky V” never, ever, ever happened, you can only imagine how I felt after a screening of the inexplicably explicable “Rocky Balboa” last week. I can’t remember
another cinematic experience quite like it. It’s a 102-minute train wreck, yet a pack of Iditarod sled dogs couldn’t have pulled me out of my seat. The premise is ludicrous in every respect, yet the fight scenes are better than ever. It’s the first-
ever sequel that blatantly, unapologetically steals moments from previous movies in the series, yet there’s something endearing about the way it keeps happening. I felt terrible for Sly &#150 after all, this movie is a desperate, transparent attempt to stay relevant &#150 yet I was furious that he so readily humiliated himself. It’s one of the most embarrassing sports movies ever made, yet every Rocky fan should be required to go, for closure. 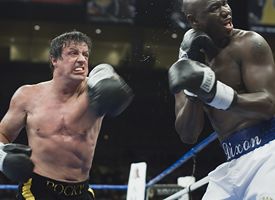 And they will go. “Rocky Balboa” will do better than people think. I have four friends who loved the first four movies and would see No. 6 even if I told them, “You are going to be so depressed afterward that you might intentionally veer into oncoming traffic on the way home.” They’re willing to take the chance. And that’s why this movie was made. Sly was banking on two generations of males weaned on the Rocky franchise, guys who get a distinct rush every time they see Rocky running the stairs on TNT as they flick by, needing one more fix. Plus, you really can’t do worse than “Rocky V.” It’s like following Isiah as the next Knicks GM: No matter how things turn out, you’re going to look OK by comparison.

Even Sly acts as if “Rocky V” never happened, refusing to use VI in the new title and proceeding in the story arc as if we left off in Russia in 1985. No longer brain-damaged or broke, Rocky owns his own restaurant in Philly, where he walks from table to table telling stories and posing for hold-our-fists-up-and-smile pictures, your regular washed-up has-been. Basically, he’s Patrick Ewing at every 2006-07 Knicks home game. He’s a widower after Adrian’s untimely death,
satisfying news to everyone who remains disappointed that the Queen of the Wet Blankets came out of her coma in “Rocky II.” (I happily include myself in this group.) And his grown-up son, who works in the financial district in Philly, is embarrassed by his old man. But I was happy to see two long-lost fringe characters from the original “Rocky” reappear with juicier roles (I won’t spoil the surprise), an inspired decision given that nearly everyone else from that first movie is dead. Another thing I liked: watching Sly rip off bits and pieces from previous installments for both the training sequences and fight scenes. Look, he stole that from “Rocky IV”! Oh, I remember that from “Rocky II”! It’s like he’s performing karao-Rocky. There’s a precedent here: Hulk Hogan’s successful WWE comeback four years ago, when the old (and seemingly tired) Hulkamania routine resonated with longtime fans who missed having him around. Maybe we’d seen the moves and matches a million times, but there was an endearing familiarity to having The Hulkster back in our lives. The last 30 minutes of the new Rocky movie plays out a little like that. I even got chills a couple of times.

So why can’t I recommend it? Four reasons:

1. Either Sly has had too much work done or he’s aging in a peculiar way that makes it seem as if he’s wearing a bad toupee and constantly dipping his face into a vat of Botox. He looks as if he’s wearing a Sly Stallone Halloween mask from the Cop Land era. (Strangely enough, the same exact mask phenomenon occurred a few years back with Burt Reynolds. If they ever decide to make Driven 2, you won’t want to watch that movie in hi-def.) It’s a little hard to get it up for the climactic fight scene when you’re worried the hero’s face could be split in half with a left jab.

2. Rocky’s buddy Paulie is still around and, unfortunately, he’s still played by Burt Young, who’s now somewhere between 95 and 135 years old in real life. Although his scenes are excruciatingly hilarious — a solid 93 on the Unintentional Comedy Scale — it’s hard to buy the premise that Rocky is still young enough to fight when his best friend looks as if he should be holding a bedpan and followed by a nurse.

3. The plot hinges on a simulated boxing match on ESPN between Rocky and current champ Mason “The Line” Dixon (played half-decently by Antonio Tarver). When Rocky “wins” the match, the ensuing hullabaloo leads Dixon’s promoters to think, “Wow, if people care about the computer fight, why don’t we get them in the ring?” I’d be fine with this angle except for one little problem: Who the heck would watch a simulated boxing match? ESPN can’t even get people to watch real boxing. This may surpass Rocky’s climbing the 50,000-foot mountain in Russia and refusing a purse for the Drago fight as the biggest stretch in series history.

4. I hate to say it, but the entire movie is a cry for help. Poor Sly clearly seems to be working out his own issues throughout, using his character’s plight as a washed-up celebrity as a disturbing parallel to his own problems. When Rocky mutters lines like, “One second they like ya, next second you’re a bum,” Sly might as well break character and gaze into the camera as he speaks. When Rocky explains to Paulie the reason he needs one last fight &#150 because he misses the limelight, because he wants one more chance to end things right &#150 Sly might as well be sitting in Burt’s nursing-home room explaining why he had to make this movie.

Was the Rocky/Sly career parallel intentional? At gunpoint, I’d say yes. Not to give too much away, the movie ends with Rocky leaving to a standing O and Bill Conti’s spine-tingling music blaring. Rocky (or is it Stallone?) turns around to soak in the cheers one last time. It’s an especially poignant, especially creepy scene, the final image of a series that should have ended 20 years ago.

The more I think about it, I wish Sly had gone in a different direction and flown Rocky to the Middle East to fight the heavyweight champion, a menacing, unbeatable 300-pound al Qaeda soldier who insists on defending his title in a secret location in Afghanistan. Rocky could have beaten him up, gotten the all-al Qaeda crowd to rally behind him and given the “If I can change, and you can change &#133” speech. I mean, if he could singlehandedly end the Cold War, why can’t he end terrorism, too?

(Crap, I just gave Stallone an idea for “Rocky VII.” Kill me now.)