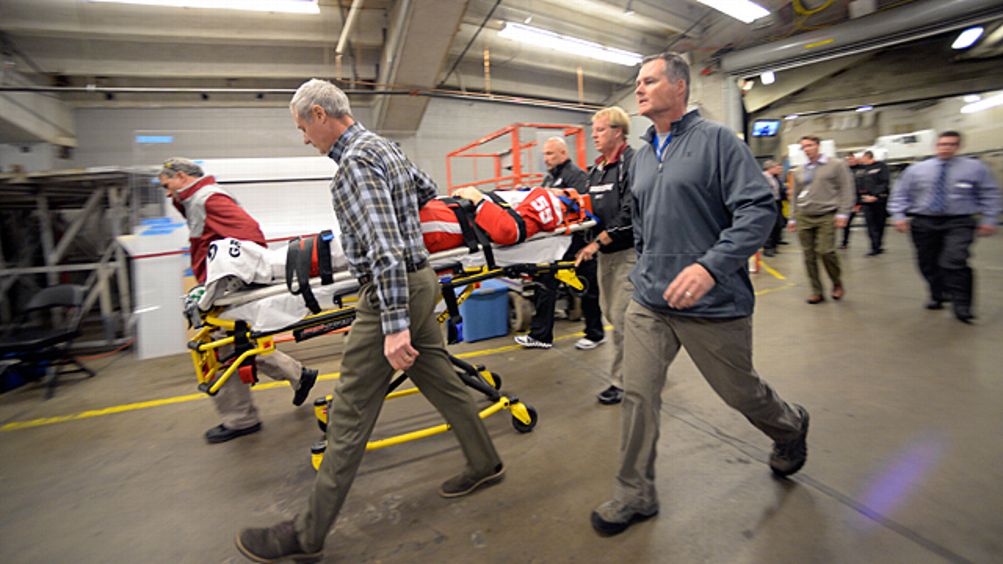 On Monday afternoon, this week in the NHL was shaping up to be an uneventful one, maybe even bordering on dull. Four hundred words later, everything had gone to hell.

That’s how long it took for this announcement from a California-based law firm, helpfully accompanied by a delightfully subtle stock photo, to deliver the news: The long-awaited NHL concussion lawsuit has finally arrived. Buckle up; things are probably about to get bumpy.

Here’s a look at the suit and what it may mean.1

On Monday, 10 former NHL players filed a class-action lawsuit against the NHL in the U.S. District Court for the District of Columbia.2 The 47-page suit, which can be read in its entirety here,3 alleges that the league knew (or should have known) about the dangers posed by concussions and failed to do enough to reduce the risk of head injuries and educate players about the issue.

The suit seeks rule changes, medical care for former players, and the “full measure of damages allowed under applicable law.” There’s no dollar value attached to that yet, but in theory it could be very high, well into the hundreds of millions.

Is this basically the NHL’s version of the recent NFL suit?

It could be, though we’re not there yet.

There are certainly similarities between the NHL’s situation and the recent NFL case. Both leagues have been plagued by player concussions, both have made recent rule changes to try to reduce them, and both have struggled with the question of how to make the games safer without rendering the sport unrecognizable to fans. For whatever it’s worth, attorney Mel Owens, who is involved in the NHL suit, is a former NFL linebacker.

Once the NFL settled its suit for $765 million in August, the sports world wondered which league would be next, and the NHL seemed like a natural candidate. Now, we appear to be starting down that path.

So everyone already knew this was going to happen?

The specifics of this particular suit weren’t known until Monday. But once the NFL litigation began, the clock was ticking on the NHL to face something similar. It has long been seen as inevitable that the league was going to be hit with a massive class-action suit over concussions at some point.

The question was when, and from whom it would come. Now that we have a starting point, other suits will probably follow, maybe quickly.

If you don’t recognize many of those names, you’re not alone. The list includes several players who could be described as journeymen, and three — Banks, Aiken, and Titanic — who played 20 or fewer career NHL games. The biggest name in the group is Vaive — who had three straight 50-goal seasons for the Maple Leafs in the early ’80s — and Bennett, Leeman, and Manno were All-Stars. But right now, it’s not a group that includes any household names.4

The list is also short on names from recent league history. None of the players was a full-time NHLer past 1994, and most played the bulk of their careers in the ’70s and ’80s.

Wait, if the players are mostly from several decades ago, why does the suit keep referring to things the NHL has or hasn’t done in the past few years?

The intention is that these 10 will be the first of many — remember, the NFL suit eventually covered more than 4,500 retired players. The NHL suit mentions that the class could consist of as many as 10,000,5 and the law firm is already encouraging more potential plaintiffs to sign up.

That doesn’t mean it will happen. Players aren’t obligated to join, and several have mentioned being approached by other law firms planning different suits. It’s likely that we’ll see more suits filed, perhaps across multiple districts. At some point, those suits would likely be joined together into one class-action suit.6

Has the NHL responded?

Not in the legal sense, though it did release a statement. It was short, and wasn’t especially interesting beyond the mention of the NHLPA’s role in managing player safety. That could signal a strategy of presenting a united front.7 Of course, it could also be the first step in throwing the union under the bus by essentially arguing that it was their job to protect the players, not the league’s.

Gary Bettman was asked about the suit Tuesday, and he gave a typical Bettmanesque non-answer that basically recited the league’s statement. (The union declined to comment Monday.)

How will the league defend the suit?

It hasn’t done much to tip its hand, but there are several options available, many of which will echo the NFL’s approach. For example, the league will probably start by trying to argue that the collective bargaining agreement preempts any litigation.

For an excellent analysis of the NHL’s potential strategy, see this post from Michael McCann at SI.

What about the players? Can they win?

They can, but it’s far from a certainty. They’ll have to show that any long-term conditions they’re facing were caused by their participation in NHL action (as opposed to in other leagues) and that the league actually did conceal information. For a detailed breakdown of the challenges the players will be facing, see this post from Eric Macramalla at TSN.

Does anything else stand out about the initial list of players?

Contrary to what you might expect, none of the players was noted for playing with an especially violent style. Vaive fought fairly frequently over the first half of his career, though it wasn’t what he was known for. The other nine players had only one 100-PIM season among them.8

Most of these players fought during their respective careers (because back when they played, everyone fought), and they certainly would have hit and been hit. But this isn’t a list of notorious enforcers.

So this won’t turn into another debate about fighting?

Oh, don’t worry, it still will.

For one, it’s a hockey story, and in some corners, every hockey story has to be turned into a debate about fighting. But in this case, fighting really is a key piece of the plaintiffs’ argument. The suit mentions it specifically, and accuses the league of increasing the risk to players by “refusing to ban fighting and body checking and by continuing to employ hockey players whose main function is to fight or violently body check players on the other team.”9

As the only major team sport that regularly features bare-knuckle fisticuffs, the NHL is in a unique position as a league. Bettman is on record disputing a direct link between fighting and CTE. That’s a position the NHL may now have to defend in court.

What has the NHL been doing to try to curb concussions?

There’s no disputing that the NHL has come a long way from the days when “having your bell rung” was considered a minor injury that players were expected to play through. In recent years, the league has introduced and later modified a rule banning certain hits to the head. By now, most hockey fans are used to hearing about “Rule 48,” which bans hits where the head is the main point of contact if that contact is judged to be avoidable.

That has certainly been a positive step, given that we’re only a few years removed from a time when hits like this were considered perfectly legal. But the rule doesn’t cover all contact to the head, and it’s questionable whether such a blanket ban would even be possible without fundamentally changing the way the game is played.

The league also introduced new protocols in 2011, mandating that any player who may have suffered a concussion be removed from the game and evaluated before being allowed to return.10 And this year, it finally made visors mandatory for all players entering the league.11

Of course, all of these safety measures were at least partly in response to a wave of high-profile concussions that had hit the league, including one that limited Sidney Crosby to just eight games over the course of a full year. Crosby wasn’t the first major star to miss significant time due to a head injury.

So just how bad is this going to be for the NHL?

The short answer is that it’s not that bad … yet. Again, this particular suit is in the early stages, and may be replaced by something else entirely down the road.

But the storm is coming, and if it’s not in the form of this suit then it will be another one. Or more than one — including the possibility that the league could simultaneously face suits in both the U.S. and Canada.

It’s worth pointing out that, in the short term at least, all the recent hand-wringing over concussions and player safety hasn’t exactly been hurting the NHL’s bottom line. Revenues are up, franchise values are up, and the league just negotiated a massive new Canadian TV deal.12

But looking long-term, the picture may not be so rosy. The NHL is nowhere near the revenue monster that the NFL is. Roger Goodell & Co. settled their suit for $765 million and it was still widely seen as a victory. If the NHL were to someday face down a penalty that was anywhere near that kind of figure, the effect on the league could be significant.

And then there’s the perception problem. If worried parents suddenly stop signing their kids up for hockey en masse, that could affect NHL talent levels years down the line. That may sound unthinkable in hockey-crazy markets like, say, Canada, but enrollment levels there have actually been stagnant or dropping for years. We’re still a long way away from some sort of great hockey player shortage, but it’s a trend worth keeping an eye on.

The next shoe to drop will likely be more ex-players being added to the current suit — there’s little doubt that the plaintiffs will be hunting for a big name or two to join their ranks. We’ll also probably see additional suits filed. That could start happening quickly, perhaps even over the next few days and weeks.

From there, we’ll wait to see if a judge allows it to become a class-action suit, and what arguments the league will make in an attempt to have it dismissed. Assuming the NHL doesn’t succeed, we move on to court proceedings, or perhaps mediation.

In any event, this will be a long process. The NFL litigation took more than two years, and that only ended through a settlement. We’re probably years away from a day when the NHL has to start cutting checks.

But the first step has been taken. And now we wait to see what — and who — might be next.