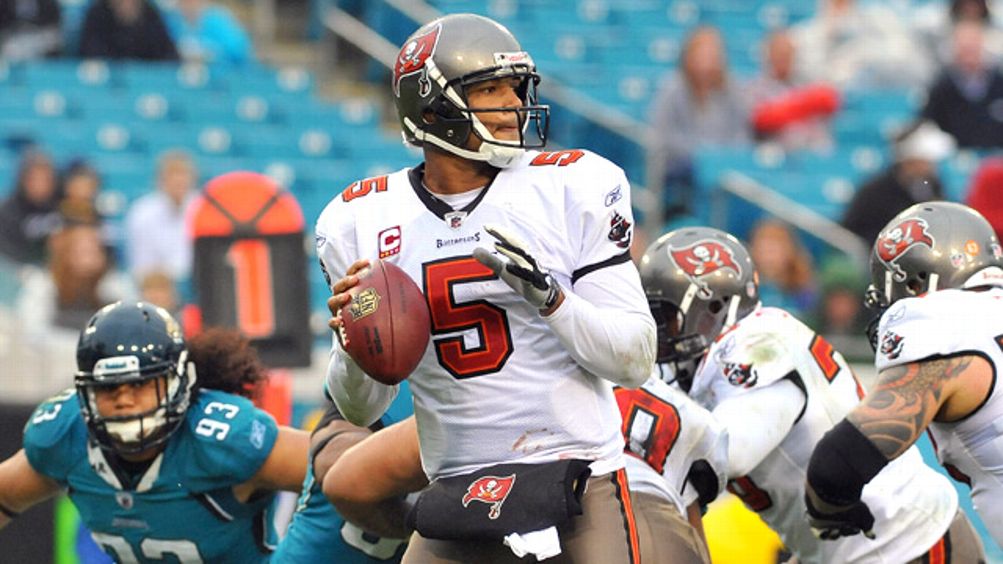 If you wildly swing a pirate ship back and forth for years in retirement country, does anybody notice?

It’s difficult for an NFL team to go overlooked, but as with the rest of their brethren in Florida, the Buccaneers are rarely the focus of the football world’s attention. Over the past few years, they’ve had all the amenities of an entertaining team — a talented young quarterback, a yappy coach, possible abandonment by ownership, wild swings in success, Albert Haynesworth — but little of the notoriety that would surround the same team if they were located in a bigger market. The disastrous 10-game losing streak that sunk them last year has already consigned them to also-ran status before the upcoming campaign, but the Buccaneers are an interesting team that deserves your attention. For a team basically regarded as hopeless, there are a few reasons to think that they might actually make some noise in the NFC this upcoming season.

First, let’s put the Bucs’ remarkable roller-coaster ride into perspective. When Raheem Morris took over for the fired Jon Gruden after the 2008 season, the Buccaneers started a massive rebuilding project that saw the core of their 9-7 team shipped out of town. Tampa promptly went 3-13. A year later, a favorable schedule and some luck in close games produced a surprising 10-6 campaign … only to see that same team go lame last season and finish 4-12. That’s three consecutive years in which the Bucs improved or declined by six or more wins. Since the NFL expanded the schedule to 16 games in 1978, that’s only happened once before: The 2004-07 Jets pulled it off, promptly throwing in a five-win improvement to 9-7 in the fifth season of that series. The 1990-93 Colts are the only team to have three consecutive five-win shifts, and they improved from 4-12 to 8-8.

That up-and-down trajectory can be attributed to the same Plexiglass principle that came up in the Niners piece from Monday; teams that dramatically improve their win totals often decline during the following season, and teams that dramatically decline often improve during the subsequent campaign. Teams that improved by six games in a given season have declined by 2.3 games during the following year, and teams that suffered a six-win decline have improved by an average of three wins. As a general rule of thumb, teams that improve or decline by three or more games in a given season will give up about half of that shift during the subsequent campaign.

Of course, the Buccaneers were producing shifts that were twice as dramatic; instead of returning to the middle of the pack, they were pinballing to and from the top and bottom as fast as any team in NFL history. Some of that is simple randomness, but there are a couple of notable factors that come into play. One obvious factor is strength of schedule. In 2010, the Buccaneers played a bunch of cream puffs, winning 10 games without beating a competent team with anything to play for by more than a touchdown. Last year, the Buccaneers got stuck with a brutal slate that included an improved NFC South and North and placement games versus the 49ers and Cowboys.1 Football Outsiders estimates that the Bucs had the second-toughest schedule in the NFL last season. Schedule strength matters; of the teams with the 10 toughest slates in the league last year, only the Giants (fourth) made the playoffs. Eight of the 10 teams with the easiest schedules in the league advanced to the postseason.

That rebuilding process has also produced one of the league’s youngest teams, one that’s gotten younger with each passing season under general manager Mark Dominik. Since Dominik arrived in town with Morris before the 2008 season, Tampa has consistently culled veterans from the roster and inserted young players, producing the youngest starting lineup in football over each of the past two seasons.

They’ll also be joined, for the first time under Dominik, by a crop of high-priced free agents. During Dominik’s time with the team, the Buccaneers have almost exclusively avoided big-ticket free agents, often going through an entire season with tens of millions of dollars left in unused cap space. Part of that is in line with the idea of the youth movement, but the rumor mill perpetually abounds with the possibility that the Glazer family, who owns the Buccaneers, is scrimping on spending in Tampa Bay to support their more notable property, English soccer club Manchester United.

The gradual introduction of a spending floor in the NFL has changed all that. During the 2013 season, every team will need to use 89 percent of its cap space. That impending requirement encouraged the Buccaneers to finally go out and be aggressive in free agency. Smartly, they mostly chose to invest at the top of the market as opposed to spending on replaceable, mid-tier players. That strategy led them to acquire wide receiver Vincent Jackson and guard Carl Nicks, each of whom might have been the best player available in unrestricted free agency at their respective positions. They made a third notable signing in cornerback Eric Wright, who isn’t on the same level as those two players, but Wright will serve as the long-sought Ronde Barber replacement, who was past his sell-by date at corner two years ago.

Barber’s moving to safety, where he’ll line up next to Mark Barron, who the Bucs took with the seventh overall pick in this year’s draft. Grabbing a safety in the upper half of the first round has usually produced disappointing results for organizations, but the Buccaneers have sported the league’s worst group of safeties over the past several seasons. This is the team, remember, that drafted Sabby Piscitelli in the second round and started him 20 times.

If Barron can deliver on the promise he showed as a box safety at Alabama, it will be a much-needed boost to the Tampa Bay run defense. While the team collapsed altogether during the second half of last year, the disappearance of their run defense was particularly notable. The Bucs went from 18th in the league in run defense DVOA to dead last during the final eight weeks of the year, and while some of that falls on a defensive line that was riddled with injuries and subpar play, blame belongs on the back seven for allowing so many big plays. During the final eight weeks of the year, the Buccaneers allowed 18 runs of 20 yards or more. Nobody else in football allowed more than 12, and the other 31 teams averaged fewer than six.2 Barron doesn’t need to get into the backfield and make plays three yards behind the line of scrimmage to be valuable; if he can just use his instincts and make solid plays without giving up enormous gains, Tampa will be much better off for having him around.

That defensive line, unfortunately, might not become the force Tampa Bay was hoping for anytime soon. The Bucs clearly wanted to build around a young, talented front four, but Dominik’s picks have failed to land. The team just traded away 2010 second-rounder Brian Price for a seventh-round pick after he reportedly punched Barron in a meeting. 2011 second-rounder Da’Quan Bowers tore his Achilles in May and will likely miss the 2012 season. Gerald McCoy, the third pick in the 2010 draft, has missed nearly half of his professional career after tearing each of his biceps. The only highly drafted defensive lineman who has lived up to Tampa’s expectations is 2011 first-rounder Adrian Clayborn, who had 7.5 sacks and forced three fumbles during an impressive rookie season. That sack total also came in a season where Tampa faced just 481 pass attempts, the fourth-lowest figure in football. Again, if Clayborn and McCoy can just be healthy and reasonably productive, it would be a huge advantage for this year’s Buccaneers over last year’s model.

And hey, maybe they could force some more takeaways in the process, too! Despite ranking fifth in the league with a plus-9 turnover margin in 2010, the Buccaneers had a league-worst figure of minus-16 last year. They’re the anti-Niners!3 Teams that have had a turnover margin between minus-15 and minus-20 have usually corrected that problem very quickly; since 1983, those teams have improved their turnover margins by an average of just under 17 turnovers in the subsequent season. They’ve also won an average of two games more than they had during the turnover-addled season.

In reality, the defense wasn’t really at fault for that turnover margin, anyway. Tampa’s defense was exactly league average at forcing turnovers after you adjust for the number of drives they faced. That responsibility belongs to the offense. Tampa Bay turned over the ball on 20.9 percent of their offensive possessions last year, the highest rate in football.4 As with most teams that turn the ball over so frequently in a given year, the Buccaneers fired their offensive coordinator and expect to implement a conservative, ball-control scheme next season. The additions of Nicks and first-round running back Doug Martin should aid that process, while Jackson should help keep safeties honest and provide an outlet for play-action. It might not work, but the logic at least makes some sense.

That’s insane. Freeman went from throwing interceptions at a freakishly high rate as a rookie to putting up one of the best seasons for avoiding picks in NFL history. It was inevitable that he would regress some in his third season, but his interception rate more than tripled. Freeman really hasn’t played all that much better or worse over the course of that 40-game stretch, but he’s seen drastically different results when you split it by seasons. Think about it like you would a .270 hitter who has five seasons around .270, one at .300, and one at .240. We’ve probably only seen the .300 and .240 seasons so far. Freeman’s interception rate should drop again, and while it probably won’t hit the 1.3 percent mark, like it did in 2010, he should settle in around 2.5 percent. If he hits that figure and the Bucs throw the ball a little less frequently than they did a year ago, Freeman’s interceptions could tumble from 22 down to 12 or 13. That would dramatically improve the defense’s starting field position and allow Tampa to complete drives for field goals or touchdowns.

It’s going to be tough for Tampa Bay to complete yet another massive turnaround and suddenly compete in the NFC South this season. The division is far tougher than it was in 2010, when the Panthers basically took the season off. On the other hand, teams make dramatic leaps into the playoffs more frequently than you would think. The Saints are ensconced in turmoil, the Panthers are more likely to take a small step backward than a big step forward, and the Bucs should get that natural push forward from replacing a player’s coach who everyone quit on with a disciplinarian like Greg Schiano whose message hasn’t yet worn thin. Perhaps they can put their 10-game losing streak in their rear window like the last two teams to undergo a similar streak before them. The Lions lost 10 games between losing six to close out the 2009 season and then the first four games of the 2010 season, while the Bengals had a 10-game losing streak in 2010 — and both made the playoffs a year later. Tampa can’t expect to make that sort of leap, but their bounceback should at least return them to national relevancy.