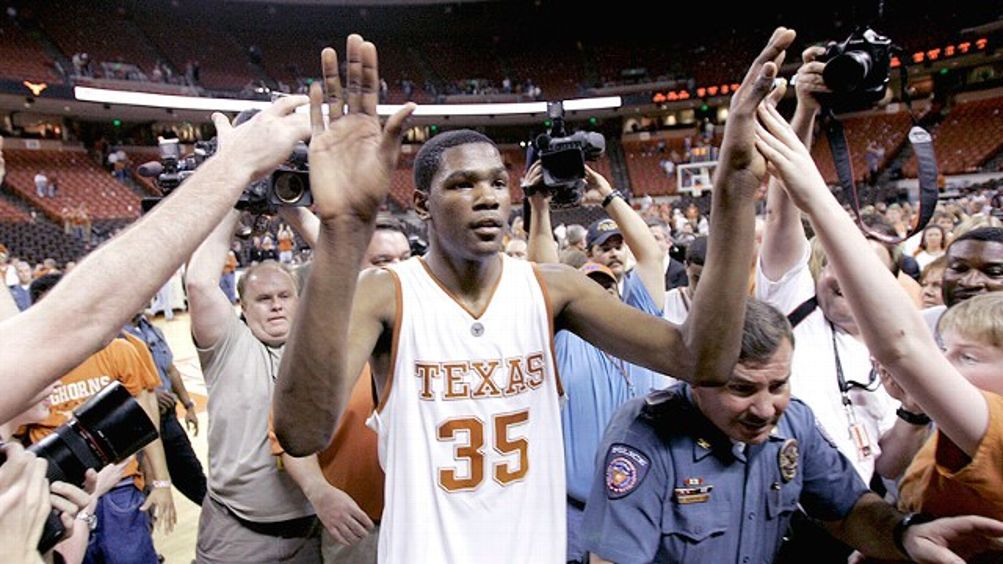 When Kevin Durant goes to the bench after getting a series-shifting, you-must-be-joking fourth foul, I’m really bummed. Time for a thought experiment to distract me. Here it is: In what sense was Kevin Durant ever a college basketball player?

Durant, like me, went to the University of Texas. But Durant was only in Austin for one season, from 2006 to 2007. And he was required to be there1 thanks to the one-and-done rule implemented by the NBA that year. The result is that the connection I feel with Durant is more tenuous than the one I feel with, say, Ricky Williams. There has to be a better, more sophisticated way for an alum to process the one-and-done college career.

The high-minded reason for this: Anthony Davis, Michael Kidd-Gilchrist, and every one-and-doner deserves for this crucial-if-compulsory college season to be woven into their basketball DNA. The real reason: As a Longhorn, I want to take credit for the rings KD’s eventually going to win. So sue me.

The wonderful thing is that Durant came to Austin. The bad thing is he was there for five minutes. His entire highlight reel can be jammed into a single paragraph. A 20-point debut against Alcorn State. A double-overtime win against Texas A&M in which he traded haymakers with Acie Law like he was LeBron James. Four 37-point games. Two heartbreaking losses to Kansas (in which Durant scored 69 combined). The Wooden and Naismith Awards. A win over New Mexico State in the first round of the tourney. And … that’s about it.

Since Durant jumped to the NBA, Texas coaches tell stories of him returning to his alma mater. He has crashed on an air mattress in a former teammate’s apartment; during the lockout, he stood under a hoop and rebounded for Longhorns players during shootarounds. But the best evidence that Durant left a mark on Austin is none of these things. It’s Baby Durant.

Russell Springmann, the spikey-haired Longhorns assistant who recruited Durant, had a son last year. In one of the great coups of modern manhood, he convinced his wife, Neissa, to name him Durant Springmann. I call Springmann to find out how he pulled it off.

“I’m blessed to have a wife that is incredible,” Springmann begins. You say this right upfront if your spouse agrees to name your firstborn after a recruit.

“We’re watching Kevin play [in the NBA] one night,” Springmann continues. “We didn’t know we were having a boy or a girl. I don’t even know if my wife was pregnant yet. We were talking about baby names. I said, ‘Durant’s a cool name.’ She’s like, ‘Yeah, Durant’s a cool name.'”

Springmann discovered Durant — the basketball player — at a Delaware tournament called the War on the Shore. Durant stood about 6-foot-8. Springmann offered him a scholarship early, which is why Durant wound up in Austin and how the idea of Baby Durant began to, uh, germinate. Though Rick Barnes had produced other lottery picks — Chris Mihm, LaMarcus Aldridge, T.J. Ford — signing Durant was a Vince Young–level event for the program. A year after Durant was drafted, Texas announced plans to retire his no. 35 jersey.

“My wife’s family name is Brown, and she wanted to name a boy Brown,” Springmann tells me. “But I wasn’t a fan of that.” So Brown got crossed off the list. “I continued to throw names out. She never got off Durant.”

One of the problems in thinking about Durant as a college basketball player is that he was caught between institutions. The NBA, starting in 2006, wanted even massively talented high school players to go to college for one year. The NCAA, still stuck in the Eisenhower administration, wants its players to be known as “student-athletes.” By going to Texas, Durant did what the NBA demanded; by leaving early, he implicitly failed at the role the NCAA had forced upon him. But it’s all a distraction, because we’re thinking about one-and-done players in the wrong way. To selfishly claim them as our own, we need to look beyond sports.

Try this: Kevin Durant is Walter Cronkite. Cronkite got to UT in 1933 and started writing about politics for a wire service. “He recognized he could get paid for not being in college,” says Douglas Brinkley, the author of a new Cronkite biography. Cronkite dropped out during his junior year and, as they say, went pro.

Durant is Richard Garriott. When the video-game developer got to Texas in 1979, he had Durant-like financial upside. He’d published a game that made him more than $100,000. At Texas, he created Ultima and the number increased several times over. But during his junior year, Garriott failed a computer science course and had to make a choice. If we can imagine a metaphor, it’s like Durant deciding between spending another season finding shots in the Rick Barnes offense or making millions from the Sonics.

“Here I was,” Garriott tells me, “facing the decision to drop out of school to do what most people interpret as playing games for a living.” Sound familiar? Garriott says his parents told him, “When this windfall runs its course, when it almost certainly will, you can go back to school, finish your degree, and get a real job.” Durant, too, has talked constantly about finishing his diploma.

Michael Dell, the computer magnate, was one-and-done at Texas. Adam Dunn, who plays for the White Sox, was a Longhorns freshman when I was a junior. He hung around for one year as a backup quarterback for Mack Brown. Then he took off for baseball. Dunn will make $14 million this year.

Durant, it seems, belongs to an alternate honor roll of students who used college hyperefficiently. When it ceased to be useful, they left. You could say Kevin Durant is to Texas as Bill Gates is to Harvard. But, really, who gives a crap about Harvard?

The morning after Game 3, T.J. Ford, the former Texas point guard, is on the phone. Is Durant a big Longhorn fan? I ask. “Of course,” Ford says, sounding shocked. “Everyone will tell you that.”

In listening to Ford, you can see the one-and-done from an athlete’s perspective. For the athlete, the crucial thing isn’t how long you spend at college but which school you choose. Moreover, in Austin — or Chapel Hill or Richmond or Spokane — an athlete becomes a full-time vessel for school spirit. He performs every day what a fan does once or twice a week — and one season can feel like four.

That spirit has carried over to the NBA, where Ford, Durant, and other Longhorns have formed a kind of Texas alumni network to rival the North Carolina network. “We tried to form that bond, try to keep guys intact with the program,” Ford says. “We want to create what other programs around the country have.”

In other words, Kevin Durant not only used college more efficiently than most of us. He became a crazed Longhorn fan faster, too. With that settled, the problem is letting myself perform another thought experiment. I ask Russell Springmann, the assistant coach, if he ever dreams about what might have happened had Durant stayed at Texas two, three, even four years. Springmann’s voice becomes serious. “No,” he says. “I don’t put myself through that.”