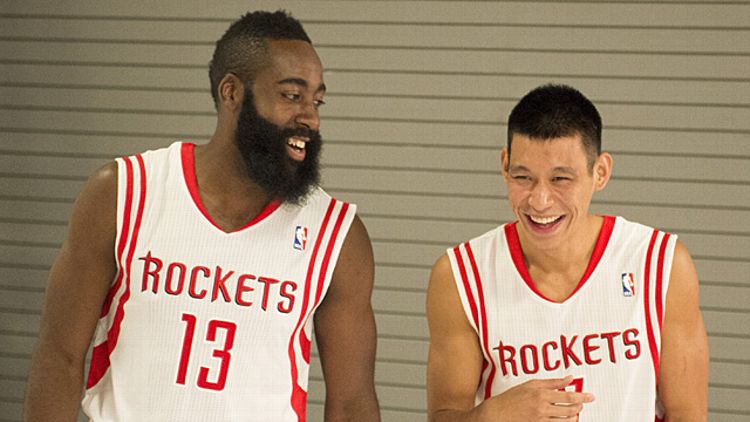 In the lead-up to the 2013-14 NBA season, Grantland will examine key players — X factors — for contending teams. Shea Serrano talked to James Harden and Jeremy Lin about Lin’s role this season.

Me: Yo.
Harden: Nope.
Me: Dude, come on. Real quick. Two things:
Harden: go fast
Me: got it. One: Do you have Jeremy Lin’s number? I’m working on this thing and I need to ask him some questions.
Harden: Is it weird?
Me: what? No. it’s about the x factor on championship contenders, which you guys are this year.
Harden: OK. I’ll send you the card.
Me: thank you. And the second thing.
Harden: uh-huh
Me: how many times have you been in the middle of lovemaking and had a small woodland creature crawl out of your beard?
Me: does that happen a lot?
Me: and when it does happen does the girl freak?
Me: or is she cool about, like, “oh hey. What’s up, tiny adorable squirrel?”
Me: because my dad always said that a girl that’ll stand by after an animal has crawled out of you is worth marrying. That’s how him and my mom got together.
[No response.]
Me: hello?
[No response.]
Me: OK cool. Thanks for Lin’s number.

Me: Hey-o.
Lin: Hello?
Me: hey, man. It’s Shea from Grantland. Harden gave me your number.
Lin: he just messaged me. He said to not talk to you.
Me: ah. That’s just harden. You know how he is. We joke around a lot. I’m always like, “Yo, James, what’s up?” and he’s always like, “how many times do I have to tell you stop messaging me” He’s funny.
[No response.]
Me: but anyway so we’re doing this string of stories about the X factor on championship contenders. Like, about the guy on a team that can win the title if that particular guy happens to play above his head during the playoffs.
Lin: I know what an x factor is.
Me: oh, right. Harvard. Isn’t that where jesse eisenberg went to college? That’s dope.
Lin: you’re getting The Social Network confused with real life
Me: right. My bad. But so the x factor thing, is that how you guys see it too?
Lin: I guess we never really talked about it
Me: I mean, because you already know Harden is gonna go nuts in the playoffs and Dwight is probably gonna be out to prove all sorts of stuff. That leaves you. Is that a lot of pressure?
Lin: it’s a discernible amount, yes
Me: what you should do is just come up with a really wicked nickname or maybe start, like, wearing a cape or something
Lin: ??
Me: DUDE COULD YOU EVEN IMAGINE HOW INTIMIDATING IT’D BE TO BE GETTING READY FOR A GAME AND A GUY ON THE OTHER TEAM WAS WEARING A CAPE
Me: EVERYONE WOULD BE LIKE “OH FUUUUUUUUU THAT DUDE HAS A CAPE HE’S GOING TO DO SOMETHING AMAZING”
Lin: that’s probably not what would happen
Me: what’s it like at Harvard? I hear it’s like the real-life version of the University of Phoenix
Lin: nope
Me: better? worse?
Lin: are we almost done?
Me: how much fun is it coming up with idioms using Harden’s name?
[No response.]
Me: when you’re out of timeouts and you need one: stuck between a rock and a Harden place
Me: when you’re having trouble figuring out how to guard someone: he’s one Harden nut to crack
Me: when someone is very tough: he’s as Harden as nails
Me: when a guy grew up rough: he’s from the school of Harden knocks
Me: when someone is playing really well: he’s giving me a total Harden
Me: when you want someone to not take something personal: no Harden feelings
Me: I could do this all day
Me: oooh maybe some sort of action movie promo where Harden is running around playing basketball barefoot or something and then he’s in a vent like “yippie-ki-yay mother …” and then before he gets to the curse word there’s a big explosion and then it cuts to a screen that just reads Die Harden??
Lin: OK that one’s actually kind of good
Me: love. Good luck this season. Go Harvard eagles
Lin: not the eagles
Me: are you sure? Pretty sure it’s the Harvard eagles.
[No response.]
Me: all right. Cool. Thanks for the time.