Where Should the Nuggets Send Ty Lawson? 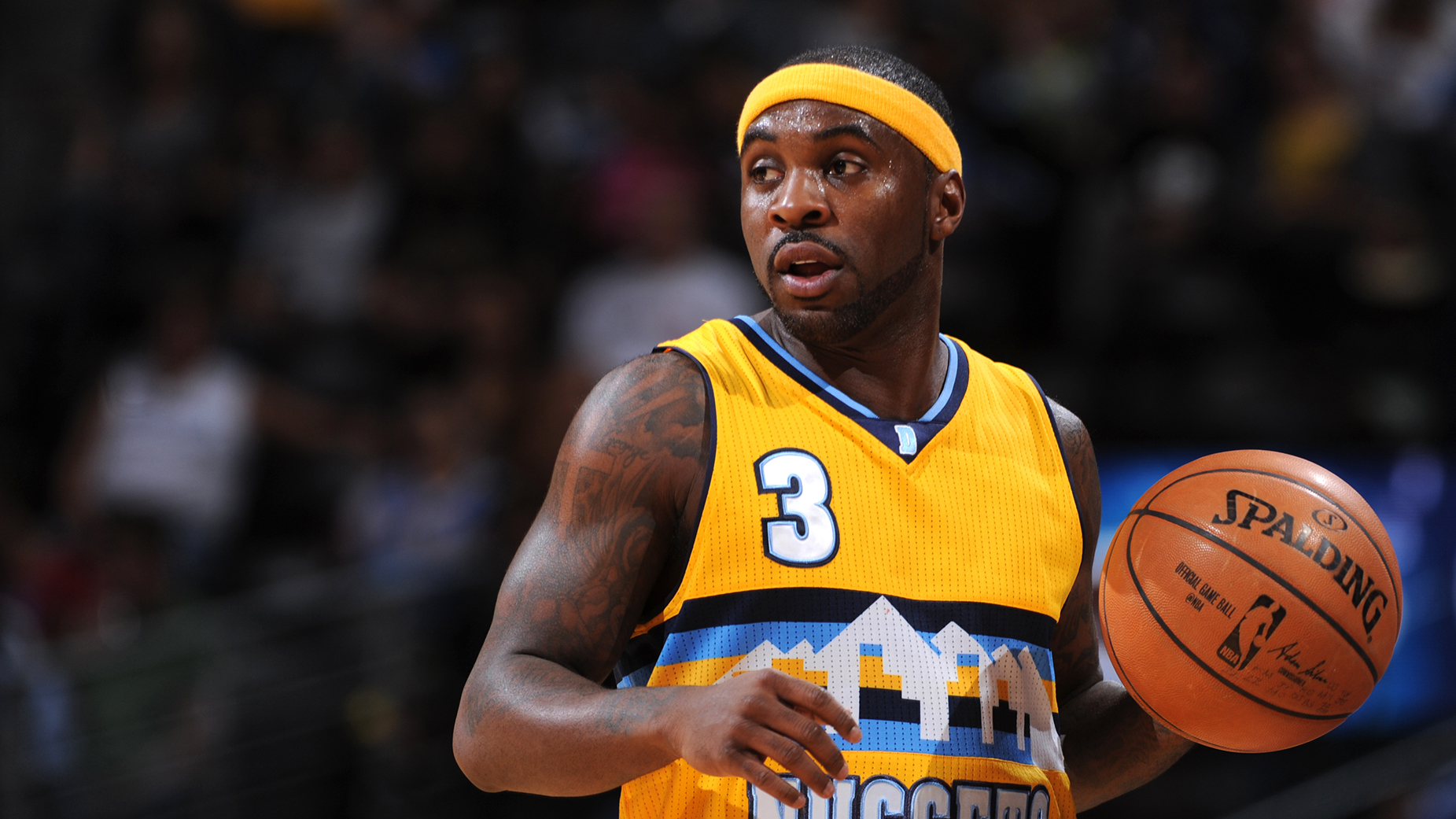 NBA free agency began at midnight, and there are all kinds of big questions that will be answered over the next few weeks. But beyond the speculation and midnight meetings and cap maneuvering, there’s one question flying under the radar: What will the Nuggets do with Ty Lawson? They have to trade him soon, right?

Kevin Love and LaMarcus Aldridge can shake up the NBA landscape themselves, but on the right team, Lawson could make as big an impact as anyone. This should be a bigger story. Ty Lawson is great.

Look at what he does to Kirk Hinrich here:

Watch him carve up the Grizzlies defense:

Look at him declare war on D.J. Mbenga:

Listen to him talk about Puff Daddy’s parenting this week:

Ty Lawson is great. His numbers are excellent (15.2 points, 9.6 assists last season) and his defense is pretty solid considering his size. He’s also only 27, and he’s signed through 2017 at about $12.5 million per year.

He’s too fun a player to watch him waste away on another awful Nuggets team. He plays so low to the ground, and he’s constantly pinballing his way through the defense, driving everyone nuts. He’s the closest thing the NBA has to Toad in Mario Kart.

Granted, Toad got his second DUI in January, and he straight-up skipped a practice to stay in Las Vegas after the All-Star break, which sums up his approach for most of last season. There are some red flags here. But those red flags just make the situation more pressing. The Nuggets have spent the last two years as a rebuilding team that doesn’t quite know it’s time to rebuild, and that scenario is even more depressing than The Process. Now they’re finally ready to rebuild for real, but those two lost seasons have already killed the trade value of their veterans.

There’s a chance Denver could bring Lawson back and make this work with a new coach — GM Tim Connelly said as much after the draft — but there’s a better chance things will only get more toxic the longer they drag out. It’s probably best for everyone to just move on, especially after the Nuggets drafted Emmanuel Mudiay last week.

Denver was apparently fielding offers for Lawson during last season’s trade deadline, but after landing two first-rounders for Timofey Mozgov, the Nuggets wanted even more for Lawson. That won’t happen — especially in a league awash with great point guards. Assuming the asking price is more reasonable now, let’s take a look around the league at some options. We’ll do this with two categories.

The Wolves: Rubio and Lawson in the backcourt. Wiggins and Towns up front. Who says no? Want to see the Wolves max out their League Pass potential as soon as possible? Don’t tell me why it wouldn’t work, just come with me on this vision quest full of alley-oops and 120-point games.

The Bucks: Imagine Jabari Parker and Giannis Antetokounmpo running with a guard who can actually score. Trade Michael Carter-Williams, throw in a pick, whatever it takes. Like Minnesota, this is probably too much fun to really happen, and that’s for the best, because if it did, I’d probably have to move to Milwaukee tomorrow.

The Mavericks: As the Mavs chase everyone from Danny Green to DeAndre Jordan, they are clearly in the market for anyone who can help. For Lawson’s part, he’s already taken to the Instagram comments to express interest, because 2015 is the best. The problem here is that Dallas has almost nothing to trade. Next year’s first-round pick went to the Celtics, and even if the Nuggets relax their asking price, they’re probably not flipping Lawson for Justin Anderson.

The Bulls: Derrick Rose for Ty Lawson. I first saw this idea thrown out by Ryen Russillo, and it’s still not quite that crazy. At some point, The Derrick Rose Experience in Chicago costs more than it’s worth. Getting Lawson back would make a transition far easier than it should be, and it would also ease some of Jimmy Butler’s rumored concerns about the team’s long-term direction. The Nuggets? They could get rid of Lawson and gamble on a few years of Rose to sell tickets while they rebuild, with an outside chance he bounces back and turns into a superstar again. Fans of both teams probably hate this idea, so I’ll move on, but it had to be mentioned.

The Rockets: If there’s a star available, Daryl Morey is interested. The Rockets have been going to war with Patrick Beverley as their floor general for the past two years, but how much scarier would they become with Lawson running next to James Harden? If Morey strikes out with Aldridge, adding Lawson could be a nice consolation, especially since the spike in TV money will free up more cap space next summer. Would Denver do much better than something like Terrence Jones, Sam Dekker, and a future first-rounder? Maybe Houston belongs in the next category.

The Celtics: Marcus Smart can play point guard, but should he? Wouldn’t the Celtics be better off handing the reins to Lawson, with Smart rotating with Avery Bradley at the 2, and Isaiah Thomas coming off the bench? How much fun would that team be? The Celtics’ future depends on the Nets picks regardless; they might as well get crazy in the meantime.

Given Denver’s dwindling leverage, Boston could probably make this happen with the Mavs’ 2016 first-rounder or their own 2016 first-rounder, hanging on to those prized Brooklyn picks. And after losing out on Justise Winslow last week and being ignored by Aldridge and Love this week, I have to imagine Danny Ainge has turned into Owen Wilson at the end of Wedding Crashers.

Maybe it’s time for Lawson to bring Ainge back to life.

The Pistons: Detroit is the dark horse in all of this. Stan Van Gundy is already busy building this team with undervalued guys who fit his system. What about a sign-and-trade that sends a pick and restricted free agent Reggie Jackson back to his home state to handle things while Mudiay develops?1 Or if the Nuggets don’t want Jackson, Detroit could package next year’s first-round pick with someone like Kentavious Caldwell-Pope. That might be enough. (R.I.P., the Kentavious Caldwell-Pope experiment, 2013-15.)

Van Gundy has done enough losing, and the East is wide open. It’s time to get serious. As the Pistons go small around Andre Drummond, it’s hard to imagine a better fit than Lawson.

The Jazz: Rudy Gobert is so dominant protecting the rim that the Jazz could probably surround him with smaller, faster players and just blitz teams every night. Derrick Favors is coming off the best year of his career, but maybe it makes sense to trade him, especially if it means adding a guard who can put them in the playoffs. Or they could keep Favors, and try to package Alec Burks, Rodney Hood, and next year’s first-rounder.

Whatever they do, the Jazz have one of the most exciting young cores in the league. But they still have a massive hole in the backcourt that Trey Burke was supposed to fill, and to hit the next level they probably need to gamble and get lucky. In other words, nobody in the league should be trying harder to make a deal with Denver over the next few weeks.

The Kings: Even Lawson sees this coming.

He posted the above video to some bootleg streaming app called Makren while watching the NBA draft and smoking a hookah. All I can say about that last sentence is that it’s our best proof yet that Lawson is in a dark place. He’s probably not that different from Ainge right now. He needs to be set free as soon as possible.

George Karl has already expressed interest here, and if the Kings plan on retaining DeMarcus Cousins and keeping him happy, there’s no clearer path toward competing right away than adding a point guard who can actually (a) score, (b) penetrate to open up the defense, and (c) get Boogie the ball on a consistent basis. Giving up a first-round pick would be a gamble, but when the alternative is betting big on Rajon Rondo, anything else feels smart.

The Pacers: Come on, Larry. Paul George is coming back, the Pacers are looking to get smaller and faster … Why can’t this work? They could send Roy Hibbert’s expiring deal to Denver along with next year’s first-rounder, and just like that, an offense that’s been dead for two years begins to come alive. Indiana won’t land stars in free agency, so gambling on the upside of players like Lawson is the best alternative. The Pacers will have a playoff team regardless with George coming back healthy, but if they add an explosive point guard and use this summer to shore up the front line, they could be a GOOD playoff team.

As for Lawson? We just need him on a better team. Somewhere, anywhere. Eastern Conference with Paul George or Stan Van Gundy, or the West with Boogie. Please, Nuggets. Do the right thing. We have to make sure D.J. Mbenga didn’t die in vain. Let Ty Lawson live.