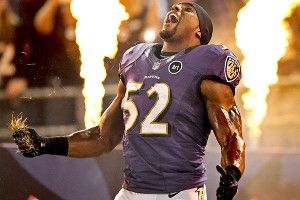 The Ravens and Redskins have been two nearby teams at opposite ends of the NFL spectrum for most of the past decade. They’re case studies in how to run an organization and how not to run one, respectively, a contrast between the cool approach of longtime Ravens general manager Ozzie Newsome and the annual frenzied idiocy of Redskins owner Daniel Snyder as lovingly interpreted by longtime sidekick Vinny Cerrato. The Cerrato era has moved on, but it wasn’t until the second half of this season that the two neighbors started to look like they were swapping roles.

The Ravens went 10-6, but they slumped badly after a glut of defensive injuries that took out many of their stars, notably including legendary middle linebacker Ray Lewis, who announced his impending retirement from the game at the end of the season. The Redskins went the other way to 10-6, starting slowly before igniting after their bye week with a seven-game winning streak to end the season under their new franchise player, 22-year-old quarterback Robert Griffin III. The two teams even had a game that served as a microcosm of their respective regular seasons in Week 14, a game in which the Redskins got off to an early lead, only for the Ravens to pull ahead for most of the game before Washington got hot at the end and pulled out a narrow, come-from-behind victory after Griffin suffered an injury. The Ravens limped into the postseason, while the Redskins roared.

It took only one week for all that change to dissipate. I traveled to Baltimore and Washington this weekend for the rare opportunity to see two home playoff games within driving distance of one another in one day. I saw two sets of fans at different points of their emotional curve as supporters, and two games that went in wildly differing directions. By the end of the fourth quarter in Washington, it felt like nothing had changed in the Mid-Atlantic region. The Ravens were up and the Redskins were down.

The day started with a drive from D.C. to Baltimore, where Ravens fans were out in droves to see Lewis’s final home game as a member of the organization he’s represented over the past 17 years. While there was the occasional merchandise stand outside the field with a vulgar T-shirt to remind the uninitiated that the opponents were once Baltimore’s team, and the introduction of Indianapolis head coach and former Ravens defensive coordinator Chuck Pagano got a nice ovation, the opposing Colts seemed to be more of an afterthought than anything else. As with many athletes, Lewis’s legacy becomes more complicated with each step you take away from his home turf, but there were no whispers on Sunday.

I was helped up to the front row of one of the sections near the tunnel for Lewis’s famous pregame squirrel dance and, well, it was hard not to get hyped for the rest of the day. I wanted to write the best tweets and take the best notes I’d ever taken in my entire life over the next three hours. Was it because of Lewis’s dance or the broader context of what it meant, though? I’m not sure, but watching 37-year-old men dancing to “Hot in Herre” hasn’t previously gotten me quite as excited without the pyro and the 70,000 people screaming.

It was easy to want to will Lewis into putting together a brilliant performance for his final game in Baltimore. He had the chance to bring those dreams into focus in the second quarter, when a pass was deflected at the line of scrimmage before earmarking a path directly to a wide-open Lewis. The ball hung in the air just long enough for the crowd to realize what was about to happen, with the loudest roar of the day coming just as Lewis had the ball bounce out of his hands and to the ground. The mythologizing came afterward, when the local radio guys chattered about how it was a vintage game for Lewis. In reality, it was impressive less for the quality of his play and more for its quantity; Lewis came back from a half-season away with a torn triceps and played virtually every snap, a surprise considering how limited his role was expected to be. He didn’t seem to be suffering any ill effects from his injury, but the Colts did enjoy a lot of success throwing in his direction, with Andrew Luck completing a number of passes to receivers camped out just outside of Lewis’s zones.

Lewis got the attention after the game, but the real star was outside linebacker Paul Kruger, who had a monster game rushing the passer, with 2.5 sacks, five quarterback knockdowns, a forced fumble, and a tackle for loss. Kruger is, in his own right, a link between Baltimore’s past and future. When the Ravens took Kruger in the second round of the 2009 draft, he chose to wear number 99, a jersey last worn in Baltimore by high-motor defensive end Michael McCrary. Former Ravens defensive coordinator Rex Ryan wasn’t pleased about the move at the time: “I’m disappointed they gave his jersey to some rookie who hasn’t proven shit, excuse my language.” After a key interception to win a game against the Steelers during his rookie year, Kruger mostly rode pine and played special teams for his first three years with the team. It’s only in recent weeks that he’s had a steady chance to start, and Kruger has suddenly become an impact player. He now has 10 sacks across his last nine games, which ties him in well with the immediate future Baltimore faces: cap issues. Kruger is a free agent after the season, and the perennially cap-strapped Ravens will have to find a way to fit him in while taking care of their quarterback situation.

The hardest part of the trip was always going to be the drive from Baltimore to Washington. Redskins games are notorious for gnarled traffic jams stretching miles away from the stadium, let alone Redskins playoff games combined with the traffic leaving another playoff game at the beginning of the trip. When I talked about my plans in the Baltimore press box, I was met with good-natured knowing laughs and suggestions of how to wait out traffic jams. My old Football Outsiders buddy Mike Tanier told me his secret was to take 295. Another told me to do anything but take 295. I’d psyched myself out by the end of the day and just assumed that I would have to leave the Ravens game early and get to the Redskins game late, with my goal being to miss a quarter of action in each. I hoped that the Ravens game would be out of hand by the time I left.

Then something amazing happened. With the Colts about to kick a field goal to make it a one-score game and bring the teams within five points, Adam Vinatieri somehow conspired to miss a 40-yard field goal. I took that as a sign and got up to leave with 13 minutes left in the fourth quarter. By the time I was walking past the “Fuck Indianapolis” shirts and finally in the parking lot, the crowd was roaring with a big run from Bernard Pierce. As I pulled out of the parking lot, Anquan Boldin’s touchdown came over the radio and made it a much more comfortable 15-point game. The only thing I missed the rest of the way was Lewis coming on the field for one final snap as a wide receiver. Even more amazingly, in a story that can only bode great things for 2013, I didn’t hit one drop of traffic between Baltimore and Landover. I somehow got to the stadium steps for Redskins-Seahawks in time for the anthem after a drive of about 30 minutes, a move that inspired awe from my friends in D.C.

And then that Redskins game happened. The angles and locations of the press boxes in Baltimore and Washington are totally different. In Baltimore, the press box is in the traditional center of the action, so there’s really nothing between you and your view of the field. In Washington, the press box is in the corner of one of the end zones, so your view is equal amounts the field and the people in the stands. The perspective forces you to see the game and interpret the reaction from the lens of the crowd at the same time. From that angle, there’s one thing that really stood out to me that I wouldn’t have picked up on TV: how joyous and raucous the Washington crowd was during that first quarter. It seemed tangibly different from the energy put out by the Ravens fans, who haven’t been able to plan a vacation in January for years. Their concern seemed to be ensuring that Lewis had a suitable sendoff in his final game. The Ravens fans reacted like their biggest concern was protecting their house. The Redskins fans reacted to that opening quarter like they were finally proud to show theirs off.

Over the final three quarters, of course, the crowd mostly sat in stunned silence in between big plays from the Seahawks and painfully short drives from the Redskins offense. They came to life again when the Redskins forced Marshawn Lynch to fumble on the goal line, and occasionally chanted “RG3” in the hopes of inspiring their injured quarterback, but the crowd otherwise seemed shocked at the slow burn of failure that was occurring before their eyes. I didn’t hear any of the crowd sweetening that was reportedly going on, which shouldn’t be surprising, since every other Daniel Snyder initiative related to the stadium has been a miserable failure, too. If Griffin does have a torn ACL, the Redskins will never live down their choice to pass on re-sodding the turf after Week 17.

The crowd started to file out after Griffin’s knee injury brought the competitive portion of the game to a close, and by the time I’d sat through the painful press conferences of Shanahan and Griffin and put together my story on the situation, it was time to walk to my car and head home. There were maybe a dozen people left in the lots, but just as was the case after the loss by the Nationals in Game 5 of last year’s NLDS, I was surprised at the lack of self-pity and anger I heard. Granted, the people left in the parking lot were likely very drunk, but they weren’t talking like people who were seeing their team get that one crack at success before another decade of misery. They were chatting about the future like a bunch of fans who were disappointed by what happened and wished that things had gone differently, but fully expected these January trips to become a regular occurrence again. Elite young talent will do that to you. After a tough year for D.C. sports fans, here’s to a better set of endings in 2013.