We Went There: Jaguars-Raiders … Are You Into Punting? 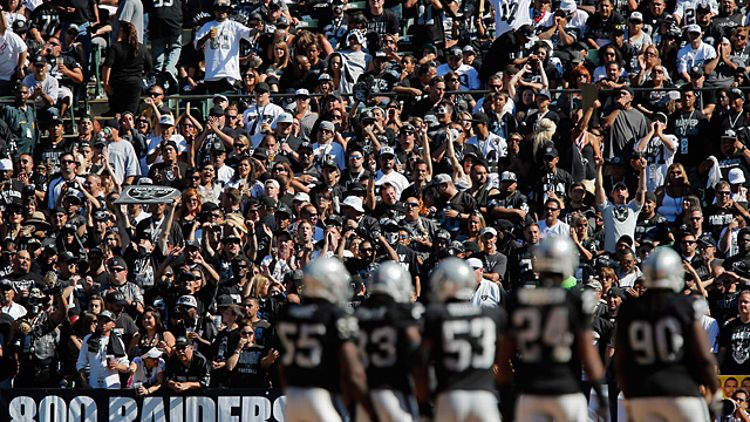 I had an assignment Sunday afternoon: Go to the Coliseum in Oakland and watch three hours of the absolute worst product the NFL has to offer.

The idea was to go where even the RedZone channel would rather not go, to check in on the dregs of the league, and to find the players and coaches who could prove that the NFL is not always, in fact, the greatest show in sports. Because if you look in the right places, you’ll find an endless loop of formation penalties and missed tackles and attempts by Henne to complete forward passes.

Well, Raiders-Jags did not disappoint. There was a moment when Denarius Moore dropped a pass from Pryor that hit him in the chest, and it took a second for the surprise to register: Terrelle Pryor hit a receiver in the chest? There was Maurice Jones-Drew struggling to find his footing in the Oakland A’s infield, because O.co Coliseum is the last place in the country where football in September means you have to run through a damn infield. There was a play where Henne took one step back, looked to throw a screen, and saw that his receiver did not think he was running a screen; then Henne turned around to hand off the ball, only to see that the running back did not think he was handing off the ball; and you thought each of these may have been quick fakes until Henne turned back around, looked ahead at the defensive linemen just breaking free of their blocks, and decided the best thing for him to do was to go ahead and fall down.

It should be noted that these teams are in transitional periods. The Raiders have been ridding themselves of bad contracts, and as Grantland’s Robert Mays has pointed out, one of Oakland’s greatest fears is that it ends up being just good enough to miss out on Jadeveon Clowney and Teddy Bridgewater. The Jaguars seem to have no such concern, however, as their first two weeks have put them well on their way toward adding whichever collegian they desire. That’s a certainty if the Jaguars continue this pace after Sunday, a day when they were penalized 10 times for 70 yards, including once on a Raiders punt — an offside call on fourth-and-4 that gave Oakland a free possession it turned into a Sebastian Janikowski field goal.

But this, for the Jags, was even worse than the rest of the season should be. There was no Justin Blackmon, who was still serving a suspension for violating the substance-abuse policy; Marcedes Lewis was injured, as was Gabbert. Instead, we were left with a team that notched a major victory when, in the second quarter, it set up a Josh Scobee field goal for its first offensive points of the year.

In the press box, the reporter next to me said only two sentences during the first three quarters of the game. In the second quarter: “Not much of a game, huh?” And then in the third quarter: “Pretty boring, huh?” Other than that, what was there to say? Bryan Anger’s and Marquette King’s punts were good, if you’re into punts. Any further thought or observation seemed like more than this game deserved.

This was how it stood until deep in the fourth quarter. The NFL allows reporters access to the field for the last two minutes of the game. Mostly, this is so we’ll be in position to conduct postgame interviews. But this is also wise because it takes bored, cynical sportswriters, and it puts them on the ground with the players they’re prepared to mock, and it forces them to watch the game up close. And up close, you can watch Henne — the supposedly bland, barely competent, how-is-he-still-in-the-league Henne — and you can see him as he seems to make 18 small decisions every half-second. And you can look at Oakland’s Lamarr Houston, vaulting out of his stance at every snap, scratching his way toward the quarterback with the fury of Raider Nation’s 60,000 drunken belligerents. And you can even see Luke Joeckel — poor rookie offensive tackle that he is — crouch into near-perfect position and do all he can to block whichever defender ends up in front of him, desperate to give Henne just one more second to throw.

And then you see Henne pass, and it’s the perfect throw in the perfect spot and it hits Ace Sanders, a 5-foot-7 pop rock of a receiver who makes a perfect leaping catch, and you realize, Holy shit, these guys are good.

And you think back on this stomach ulcer of a game, and suddenly you remember the way Darren McFadden seemed to just arrive at the second level of the defense, and the way Pryor floated downfield after sending the defense to chase his read-option fake, and the way Paul Posluszny leaped to get a fingertip on one of Pryor’s passes, diverting it just enough to turn a sure touchdown into an incompletion. And inevitably, of course, you think about the fact that some of these guys are turning their brains into green bean casseroles for your entertainment (and, it should be noted, for gobs of money), so maybe you can spare them the scorn. Amid these thoughts you watch the clock tick down, reaching zero, prompting the Coliseum to detonate with cheers.

Oakland defeated Jacksonville 19-9 on Sunday. It was awful. Except for the moments when it was great.

College Football, Week 3: We Had Comedy, We Had Mystery