The Weekend in Hockey: It’s Miller Time in St. Louis 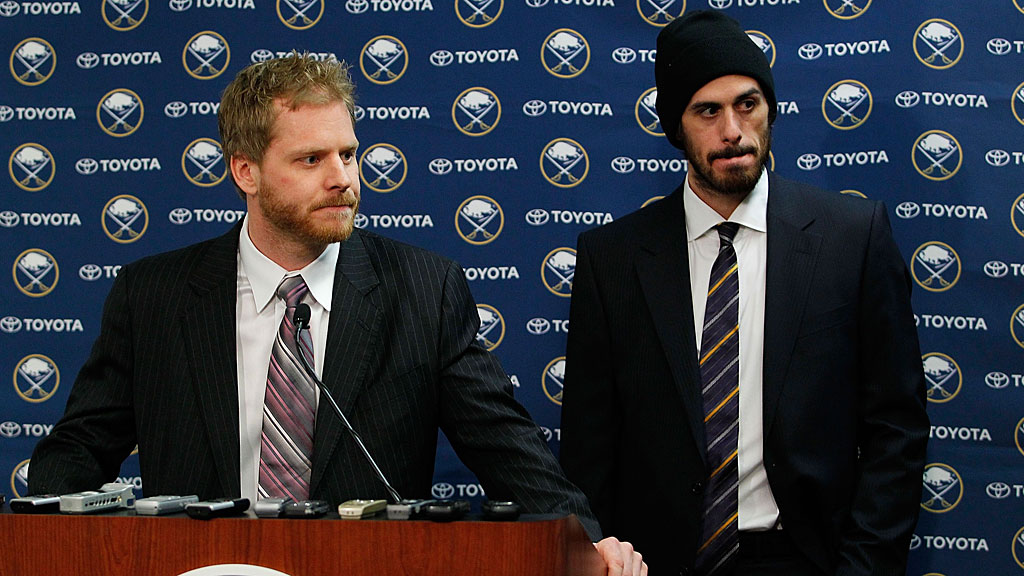 It’s not often the last-place team grabs all the headlines this late in a season, but the Buffalo Sabres were at the center of two of the league’s top stories this weekend.

On Friday, the Sabres pulled off the biggest trade of the season, sending star goaltender Ryan Miller and team captain Steve Ott to the St. Louis Blues in exchange for Jaroslav Halak, Chris Stewart, a prospect, a first-round pick in 2015, and a conditional pick.

The deal is a classic “going for it” move for St. Louis, as it acquires a former Vezina winner who’s still considered one of the league’s best. Halak and Miller have put up similar stats in recent years, and even Blues GM Doug Armstrong admitted that the deal offered no more than an incremental improvement in the crease. But with St. Louis emerging as one of a handful of top contenders for the Stanley Cup in a very tough Western Conference, even a small upgrade could make the difference between early-round disappointment and the franchise’s first championship. While it didn’t come cheap, the acquisition of Miller has received generally positive reviews.

From the Sabres’ perspective, while it’s always difficult to trade a franchise player, the consensus was that new GM Tim Murray did well in the deal. He got a top prospect and a first-round pick, and there’s a good chance of the conditional pick becoming another first. Given the thin market for goalies over the years, that’s a decent haul on its own. But in Stewart and Halak, he also gets two veteran players whom he can turn around and trade for more futures over the next few days.

Combine those incoming deals with the expected trade of Matt Moulson, as well as possible moves involving players like Tyler Myers and Christian Ehrhoff, and the Sabres should come away from the deadline with an absolute windfall of picks and prospects. That includes multiple firsts in the 2015 draft, which is highlighted by future franchise player Connor McDavid. This is how you do a rebuild. Murray is not screwing around.

All of which served to provide long-suffering Sabres fans with some hope that the organization is finally on the right track. So it goes without saying that the optimism was allowed to last for less than 24 hours before the franchise suffered yet another black eye: the surprise resignation of president of hockey operations Pat LaFontaine on Saturday.

LaFontaine had only been on the job for less than four months, having been hired to great fanfare in November. Now he’s headed back to his old job at the league head office. It’s the second time in LaFontaine’s managerial career that he’s had a stunningly short stint with an NHL team, having lasted just 40 days with the Islanders in 2006.

There’s talk that LaFontaine and Murray weren’t on the same page about Miller, which would explain the conflicting reports coming out of Buffalo leading up to Friday’s deal. Others suggest that there’s something bigger going on. Either way, while LaFontaine may have been higher in the team’s org chart, general managers rarely lose front office power struggles, especially ones that come just weeks after they’ve been hired.

With all due respect to LaFontaine, judging by the work Murray has managed to do so far, Sabres fans have to feel like the right guy kept his job. It was a disruptive weekend in Buffalo, and there’s more to come before Wednesday’s deadline, but for the first time in years this looks like a team with a plan.

The Vancouver Canucks apparently felt like making it through an entire season without yet another round of Roberto Luongo drama would have been too much to ask. So heading into Sunday’s much-hyped Heritage Classic, played in front of 54,000 fans in Vancouver’s BC Place football stadium, the team decided that rookie backup Eddie Lack would get the start.

Luongo was badly disappointed by the decision, and rightfully so. Lack has started both games since the Olympics and played well, so it’s not like turning to him again was an indefensible choice. But the Canucks are already embroiled in a pre-deadline drama surrounded Ryan Kesler’s rumored trade request, not to mention the team’s fading playoff hopes, so you’d think they’d want to avoid yet another round of Luongo controversy. But you’d apparently be wrong, because here we go again.

For one, the move put Lack in an impossible position. The frustrated Vancouver crowd was chanting “We Want Lu” by the second period, which didn’t go unnoticed, and the rookie was clearly uncomfortable being stuck in the middle of the drama.

Luongo, for his part, spent much of the last two years waiting patiently for a trade that never came. The Canucks had made the decision to move forward with younger backup Cory Schneider, shopping Luongo around the league. That plan lasted up until last year’s draft, when the Canucks changed direction and sent Schneider to the Devils instead.

It’s been argued that Luongo’s untradeable contract left the Canucks with no other choice but to deal Schneider, but that’s not quite true. There was another option: using a compliance buyout to cut Luongo loose. That would have been an expensive move, obviously. But then again, small-market teams like the Islanders and Lightning were willing to spend big money on buyouts. The Canucks weren’t, and so Schneider had to go.

It wasn’t a fun situation for anyone involved, but Luongo made the best of it, at least publicly. Apparently, this is how the Vancouver brain trust plans to thank him. While Lack is a good backup goalie who’ll get his share of starts, it’s hard to see how using him in the team’s highest profile game of the season is anything but an intentional shot across Luongo’s bow.

So buckle in for a few days of Luongo trade rumors, followed by weeks and months of buyout talk. It’s a bizarre situation, given how easily avoidable it all could have been.

Goaltending drama aside, the Canucks did have an actual game to play, as they hosted the Ottawa Senators in the Heritage Classic. It was the sixth and final outdoor game of the season, but managed to avoid a “more of the same” feeling by throwing in the fun twist of not actually taking place outdoors.

Under BC Place’s closed retractable roof, the Senators spotted the Canucks an early 2-0 lead before coming back to earn a 4-2 win. It was a win that Ottawa desperately needed, keeping it within three points of a wild-card spot heading into what figures to be a busy trade deadline. (The Senators are rumored to be the front-runners to land Stewart from the Sabres.)

Meanwhile, the Canucks lost not only the game but also Daniel Sedin. He took a hit from Senators defenseman Marc Methot in the second period and needed help to get back to the locker room. He didn’t return, and the team said he would be re-evaluated today.

The Classic was the second of two stadium games played on the weekend, following Saturday night’s contest between the Penguins and Blackhawks at Chicago’s Soldier Field. While that game itself wasn’t especially dramatic — the Hawks dominated in a 5-1 win — the setting and snowy conditions provided all the visual appeal fans have come to expect from outdoor contests.

The game also featured a unique selling point: It was the first NHL meeting between Team Canada teammates Jonathan Toews and Sidney Crosby. Thanks to injuries and interconference scheduling, the two had never suited up in the same game in the seven years they’ve both been in the league.

It’s fair to say that Toews wins this round, as he scored twice and added an assist while Crosby was held off the scoreboard. The two teams play again at the end of the month in Pittsburgh in what will be their last meeting of the year, barring a dream matchup in the Stanley Cup final.

• The Martin Brodeur trade watch status has officially moved from “completely unthinkable” to “unlikely, but definitely possible,” with some reports even indicating that he’s already agreed to waive his no-trade clause. The big question may be which teams would want him — based on the numbers, he wouldn’t be an upgrade for many. Then again, a lengthy playoff résumé and a handful of Cup rings could be attractive to a contender.

• One potential destination for Brodeur is the Wild, who’ve spent the year seeing their goaltending depth shredded by injury and illness. They’ve won four straight to all but clinch a playoff spot, and they have the cap room to make a move or two this week.

• In a minor pre-deadline deal, the Panthers acquired center Brandon Pirri from the Blackhawks on Sunday for a pair of midround picks. They also scored four third-period goals to beat the Islanders, 5-3.

• The Capitals moved into a tie with Detroit for the East’s final wild-card spot after a 5-4 overtime loss to the Flyers. That game included the Caps blowing a two-goal lead, as well as this ridiculously close no-goal call against Washington’s Nicklas Backstrom.

• That win was the Flyers’ second straight, and moved them past the Rangers into second place in the Metro.

• The Kings are 3-0-0 since the break, and have actually scored a few goals along the way. It hasn’t mattered much in the standings, since they’re basically locked into third place in the Pacific, but it has to be a scary sign for teams like the Ducks and Sharks, who know they’ll have to go through them on the way out of the West.

• The Hurricanes were shelled in Anaheim on Sunday, dropping a 5-3 decision to the Ducks. It was a rough outing for Carolina, which has lost five straight.

• The Canadiens earned a 4-3 overtime victory over the Maple Leafs on Saturday. They’ve won two straight despite missing Carey Price, who hasn’t played since the break because of a leg injury.

• Finally, if any team is going to hit the big red button marked “Detonate” at the trade deadline, you’d think it would be the Oilers. They’ve picked up where they left off after the Olympic break, losing twice while scoring only one goal, including Saturday’s 2-1 overtime loss to the Flames. They’re also the only team with a realistic chance of “catching” the Sabres for last overall. Craig MacTavish promised us bold moves and hasn’t delivered so far. For entertainment’s sake, here’s hoping he’s been saving it up for this week.