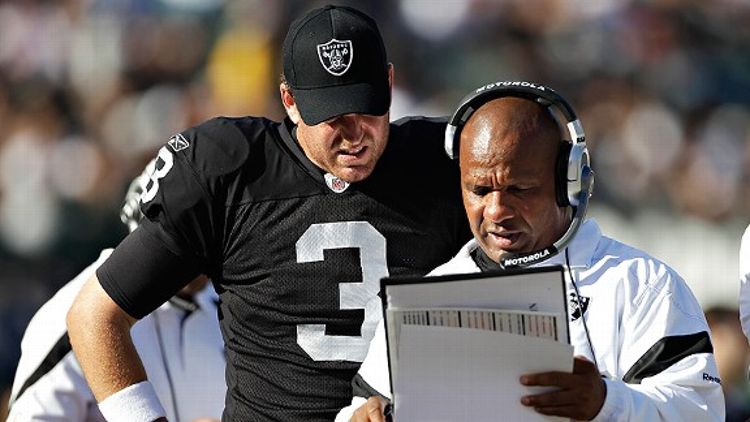 Every Thursday afternoon in the Triangle for the remainder of the 2011 season, Bill Simmons will make his pick for that night’s NFL game. Here’s his pick for Week 10 (home team in caps).

CHARGERS (-7) over Raiders
The Raiders might be quitting on Hue Jackson, and why not? Since when is it smart to (reportedly) warn your players that you’re looking at free agents and won’t hesitate to cut certain players, especially when you’re the same guy who thought it would be a brilliant idea to give up first- and second-round picks for Carson Palmer? Shouldn’t you keep a low profile after your players watched noodle-armed ducks fluttering around their practice field and thought about things like, “Wait a second, was that the dumbest trade in NFL history?” This will not end well, and my only regret is that Al Davis wasn’t not alive to see it.

Meanwhile, the Chargers look like they’re setting us up for the classic Turner/Rivers “we started out slow, blew a couple of dumb games, and just when you counted us out, we ripped off seven straight wins” swerve. They also haven’t blown out anyone yet (Minnesota by 7, Kansas City by 3, Miami by 10, Denver 5) which makes no sense for such an explosive offense … you know, assuming this is an explosive offense. I’m not giving up on it: Gates was hurt, Mathews was hurt, Malcom Floyd can’t seem to play three straight series without limping off, and Phil Rivers is experiencing the growing pains that every young QB has. Oh wait, he’s 30 in four weeks. Scratch that last excuse. But the Chargers are due for a blowout victory, one of those games when you feel dumb eight minutes into the first quarter that you picked against them … and more importantly, that you picked FOR Carson Palmer and Hue Jackson. Just say no.