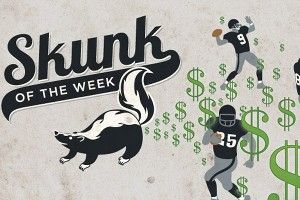 There are two ways that a blackjack dealer can ruin your night. I don’t mind the first way — if he’s grimly dealing himself face cards and blackjacks, you know it’s time to flee to another table. (And if you don’t, it’s your own fault.) But when the dealer keeps giving himself 3’s and 4’s, grinding out five-card 19’s and BARELY beating you? That’s trouble. You always feel like you’re one good hand away from flipping the script on him, only an hour later, he’s apologizing profusely as you’re debating whether to hit the ATM because — DAMMIT — you know you can beat this guy.

That’s the Atlanta Falcons right now. Nobody is afraid of them. Everyone thinks they can beat them. Somehow, they keep grinding out those 19’s and 20’s and sending people to ATMs. When our friends at Football Outsiders wrote that “Atlanta is the worst 10-1 team DVOA has ever tracked, and it isn’t even remotely close,” on the Stunned Revelation Scale I was somewhere between “Lindsay Lohan got arrested again?” shocked and “Something crazy happened with Katt Williams again?” shocked. Their only three double-digit victories came against teams with a combined 8-25 record (Kansas City, San Diego and Philly). Their most impressive victories came against Denver (during Peyton Manning’s Mr. Noodle stretch, when he nearly made up a three-touchdown deficit anyway) and a hot Bucs team in Tampa last week (by one point). They would have lost to the Redskins had RG3 not gotten hurt (and nearly lost anyway). They needed all four quarters to hold off the Artists Formerly Known As The Cowboys. They clawed out a miracle come-from-behind win in the season’s most incompetent coaching performance by anyone not named Pat Shurmur (kudos, Ron Rivera), an and also came back against a pathetic Raiders team that has lost five games by 20-plus points this season. Most memorably, they barely squeezed by a free-falling Cardinals team on a day when Atlanta’s MVP candidate threw an astonishing five picks.

According to the Football Outsiders guys, the Falcons have gone 10-1 against the third-easiest schedule in the league. They finished with a negative DVOA (meaning they were statistically below average) in their last four games and six of their last eight. They’re “thoroughly mediocre” (FBO’s words) in offense (14th), defense (16th) and special teams (17th) despite the fact that, in just 11 weeks, they played five coaches who will definitely get fired after the season (Andy Reid, Norv Turner, Romeo Crennel, Rivera and Jason Garrett); two coaches who might get fired after the season (Ken Whisenhunt and Dennis Allen); six QBs who won’t be starting in 2013 for those same teams (Matt Cassel, Michael Vick, Ryan Lindley/John Skelton, Carson Palmer, Kirk Cousins and, maybe, Philip Rivers); and just one definite playoff team (the Broncos).

Anyway, I’m picking the Saints to cover a 3.5-point spread in Atlanta tonight for a variety of reasons — the Saints have their number, the short rest won’t bother Brees, the Saints love playing in a dome, the Saints need the game more than Atlanta does, I love getting points in any division rivalry game — but mainly because I’m the same guy who stays at that blackjack table against the dealer who keeps stumbling into those 19’s and 20’s. It’s my Vegas weakness. Are we probably headed for the Falcons screwing me over three or four more times until one of my friends finally pulls me away from the table? Probably. Right now, I’m staying put. Somebody find me a cocktail waitress and a pack of Marlboro Lights — I know I can beat the Falcons. Sorry, New Orleans, you’ve been sprayed.