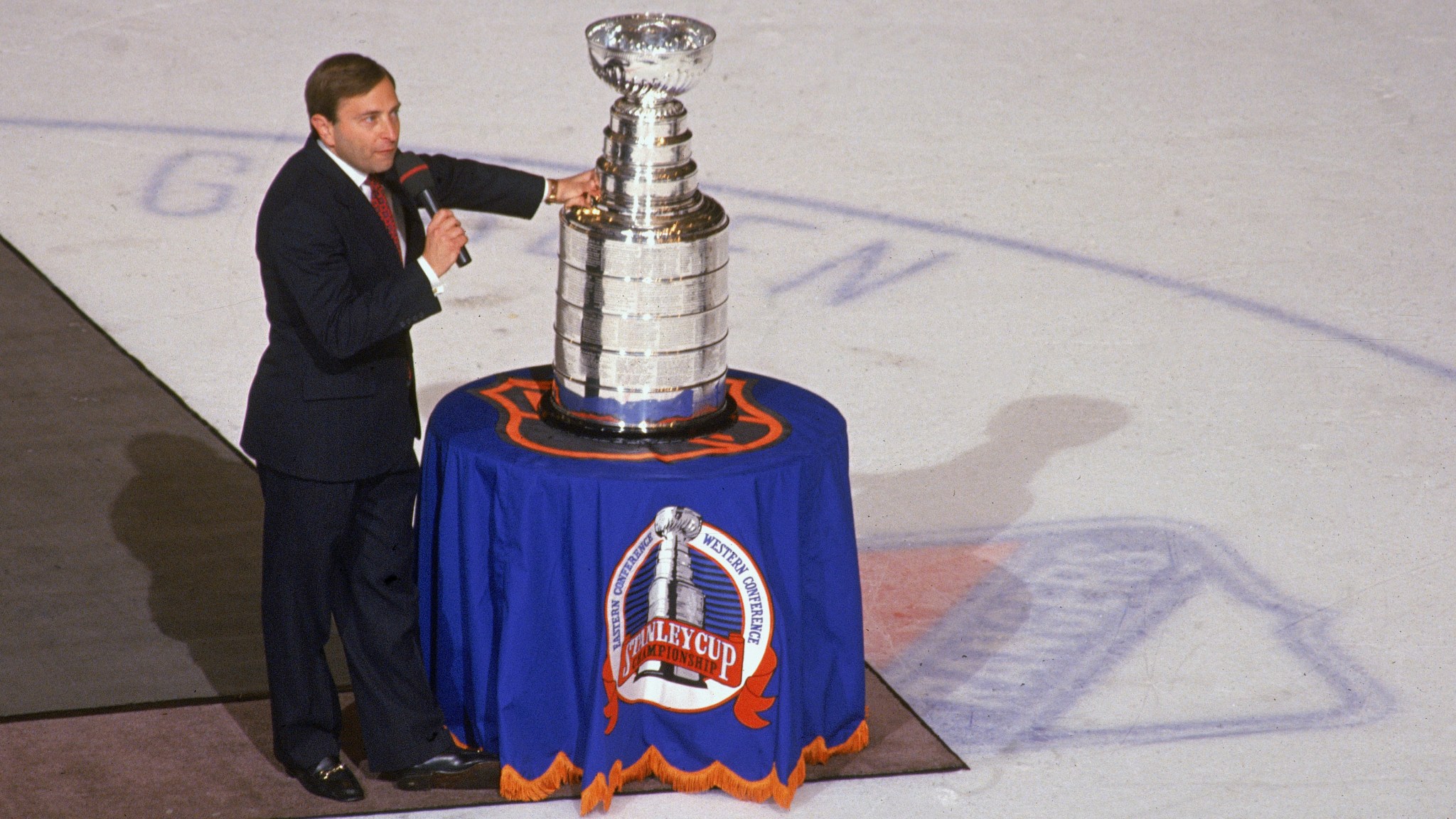 Twenty years ago this month, NHL fans had plenty to talk about. Training camps were set to open. The New York Rangers were getting ready to raise the banner on their first Stanley Cup title in 54 years. And hockey fans were about to get their first taste of what would become the league’s trademark over the next two decades: an extended, season-disrupting work stoppage that would alienate fans and change the way the game was played, both on and off the ice.

Granted, compared to what we now know was to come, the 1994 lockout could be viewed as just a warning shot, and in the years since it’s been largely forgotten. But back then, as the September days ticked past and the unthinkable slowly turned into the inevitable, it was unlike anything hockey fans had ever seen before. And the dispute set the stage for Rounds 2 and 3 and beyond, as one side would eventually suffer an embarrassing loss that it swore it would never repeat.

As the calendar flipped over to September 1994, the players and owners were clearly headed toward some sort of labor showdown. The league’s collective bargaining agreement had expired, and the owners refused to play out the season without a new one, arguing that doing so would leave them vulnerable to a midseason strike that could wipe out the remainder of the year. That concern wasn’t unreasonable, considering that Major League Baseball was just days away from canceling the World Series because of just such a stoppage.

The NHL had gone through labor disputes before, including a 10-day player strike in 1992 that briefly threatened that year’s playoffs.1 But the 1994 dispute was something altogether different. This time it was the owners who were threatening to shut the game down, while loudly threatening they were willing to miss extended time to get the right deal. More importantly, they were doing it all under the leadership of a fresh-faced, new commissioner who’d assured them victory: Gary Bettman.

Bettman had been hired in December 1992, partly as a response to that year’s strike.2 He came over from the NBA with a reputation as one of the sports world’s smartest and most ambitious young executives. His NHL mandate: aggressive expansion, a new American TV deal, a focus on growth (especially in the southern U.S.), and lasting labor peace … under the owners’ terms, of course.

Those terms, it was widely assumed, would include some sort of salary cap.3 In a move that would become familiar to hockey fans a decade later, Bettman himself refused to call it that, insisting that the owners’ proposal was merely a tax plan, but the result would have been essentially the same. The players, under the leadership of Bob Goodenow, were open to a small tax, but preferred that the league achieve the bulk of its financial goals through revenue sharing instead. With the owners insisting that rising salaries and growing financial disparity between teams necessitated a hard line, there was talk the entire season could be at stake. This work stoppage, we were warned, could be The Big One.

The owners’ stance didn’t come without risk. The potential opportunity cost was enormous; not only had the baseball strike given the NHL a chance to start the season without any competition from the Fall Classic, but the league was still riding high off an exciting season that culminated with the Rangers’ dramatic Cup win. The positive buzz was so strong that there was talk of the NHL actually threatening the NBA as America’s third-most popular sport.4 With the sort of momentum the league had been chasing for a generation finally behind it, it seemed like the worst possible timing for an extended work stoppage.

Despite that, it quickly became clear the situation was dire. Bettman had actually fired the first shot in August, unilaterally withdrawing several player benefits in a move the owners claimed was meant to spur negotiations. While talks had indeed resumed in August, the move served to unify the players against the owners and their new commissioner. Those bad feelings eventually culminated in a memorable Chris Chelios rant in which he appeared to threaten Bettman’s safety.5

In an odd twist from the league’s future lockouts, the 1994 dispute didn’t prevent the start of training camps. Players reported in mid-September as scheduled, and the exhibition schedule was played. But as the countdown toward opening night continued, any chatter around line combinations or rookie debuts was quickly replaced by lockout talk. As camp wore on, the usual battles for lineup spots began to feel futile.

After weeks of stalled negotiations and sniping in the media, the inevitable became official on October 1, 1994, as Bettman announced that the season would not begin as scheduled. The usual script was followed, with the owners expressing their ever-so-sincere regret and the players swearing they were united. The first batch of games was officially canceled three weeks later, with more to follow as the lockout wore on. At one point, the players considered retaliating by reducing that year’s playoffs. Of course, that would require that the playoffs were actually played; that possibility seemed less and less certain as the weeks passed.

While the league itself remained inactive, the players found ways to stay busy. Wayne Gretzky put together a roster of various all-stars and personal friends that toured Europe, while the NHLPA organized a 4-on-4 tournament in Hamilton that ended with Team Ontario defeating Team Quebec. Other stars went to Europe, played pickup shinny, or just stayed on their couch.

As the stoppage dragged on, talk of a leaguewide salary cap and/or luxury tax began to fade, replaced by owner demands for a rookie cap, changes to the arbitration system, and loosened free agency. The first signs of real progress came in December, by which point the league had already wiped out almost a third of the schedule. By the end of the month, the increasingly unified players had modified their stance to reject any form of payroll tax outright. By early January, both sides were making noise about final offers, and it came down to a question of whether either side would blink.

The owners blinked. With their own deadline for canceling the entire schedule approaching and the players increasingly holding the upper hand, the owners’ ranks began to weaken. Behind the scenes, Bettman had begun feeling heat from wealthy teams that didn’t want to become the first league in North American sports history to wipe out an entire season just to help out their small-market colleagues. The expected cave-in from players who’d missed three months of pay hadn’t materialized, with Goodenow and the union seeming as strong as ever.

On January 11, 103 days into the lockout, the two sides reached a deal. The owners won several minor concessions, including a rookie salary cap and changes to the arbitration system. But they failed to get any sort of leaguewide salary cap or luxury tax system at all, and the salary growth that had spurred the stoppage in the first place would go on to continue unchecked for years to come.

The puck dropped for the 1994-95 season on January 20, 1995, with the Rangers finally raising their Stanley Cup banner. The league played an abbreviated 48-game regular season that dragged into May, followed by a full playoffs that saw the defensive-minded Devils shut down the high-flying Red Wings to win the Stanley Cup. The lockout, combined with the onset of a low-scoring decade that would come to be known as the dead puck era, squandered the momentum the league had been riding in 1994. Any thoughts of the NHL threatening the NBA faded quickly, and while the league has recently boasted record revenue, it struggles to this day to maintain a prominent place in the American sports conversation.

Perhaps worst of all, the 1994 lockout created a deep resentment between players and owners generally, and between Goodenow and Bettman specifically. The original six-year deal was eventually extended to 10 years,6 but when it finally expired in 2004, the owners were ready. This time, there would be no talk of luxury taxes or other half-measures, and there would be no midseason blinking. Bettman would deliver a hard salary cap, preferably accompanied by Goodenow’s resignation, and he would cancel as many seasons as needed in order to make it happen.

We all know how that turned out; the 2004-05 NHL season remains the only one in sports history ever canceled in its entirety by a work stoppage. The cap arrived, Goodenow departed, and the NHL entered a new era when it finally resumed play in 2005. That fresh-faced kid named Gary Bettman just celebrated his 20th anniversary on the job, and he makes more money than all but a handful of players.

None of that was enough to prevent yet another lockout in 2012, of course. That one dragged on into January, and led to the league reaching a last-minute deal and playing a 48-game schedule. You could forgive longtime fans for feeling a sense of déjà vu, since they’d seen the story play out before.

The 1994 lockout may not have turned out to be The Big One — that came a decade later. But it did set the stage and establish the script, and 20 years later, hockey fans are still feeling its effects.