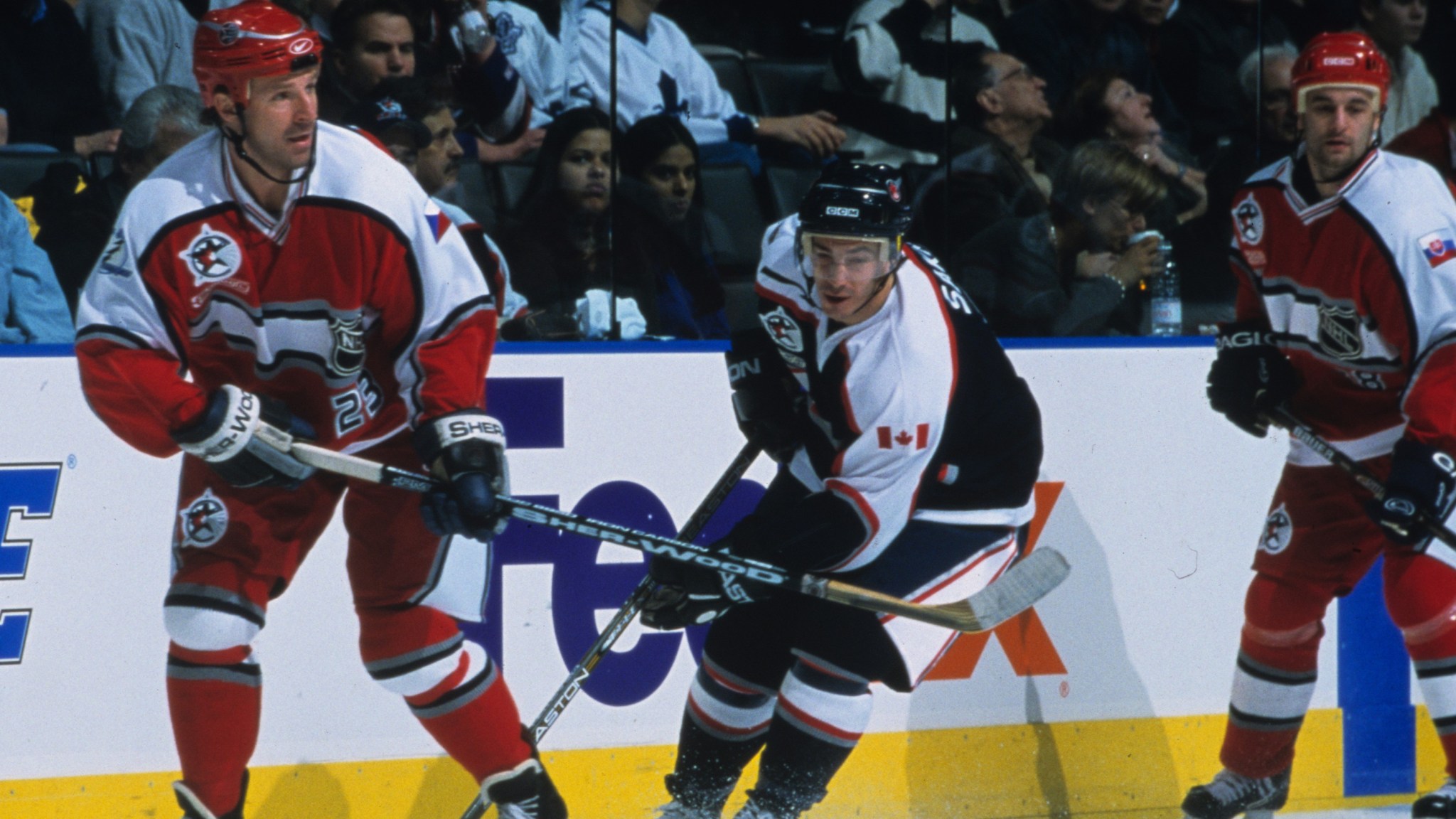 The NHL All-Star rosters were announced on Saturday, and everyone is mad because that’s the whole point.

Some guys were undeserving, several more were snubbed, and at the end of the day none of it really mattered because All-Star games are kind of pointless when you think about it. But it’s all in good fun, and considering the entire Blackhawks roster had already been voted in, the league did the best it could with the few spots it had to work with.

Besides, if you think some of this year’s choices were odd, none of them come close to matching some of history’s strangest All-Star choices. After all, the league has been doing this for decades. The odds say that every once in a while, things are going to get truly weird.

So today, let’s take a look back at some of the oddest All-Star picks from over the years. Maybe by the end of this post, Justin Faulk won’t seem so bad.

John Garrett and the Case of the Disappearing Car

If John Garrett’s name sounds familiar, it’s probably because he went on to a very successful broadcasting career after his playing days were over. He’s been in that business for more than 25 years, working for properties like Hockey Night in Canada and Sportsnet. He’s a really good TV guy.

What he never was, though, was an especially good NHL goaltender.1 He spent six years in the league, mostly backing up, while posting a career goals-against well north of 4.00 and never winning more than 16 games in a season. Given all that, it sounds strange to describe Garrett as a former All-Star. But the story of how he got there is even stranger, and there’s a good case to be made that he’s the most unlikely NHL All-Star pick of all time.

Here’s how it happened. In February 1983, Vancouver’s starting goalie was Richard Brodeur, a pretty good player who’d just been chosen as the Canucks’ lone representative at the All-Star Game. The team traded for Garrett on February 4 to add a veteran backup. The next night, Brodeur suffered a serious ear injury that took him out of the lineup just days before the All-Star Game would be held.

That left the league with a problem. Brodeur was the Canucks’ only All-Star selection, and the rules said that each team had to be represented. And since he was a goalie, his replacement would need to be one too. That left Garrett as the only possible choice, even though he’d won only six games all year. At the time, the whole thing was viewed as “kind of a mockery of the sport,” according to, uh, John Garrett himself.

Old-time fans may remember what happened next. Garrett came in midway through the All-Star Game and stood on his head, making several spectacular saves. He played so well that when MVP voting was done during the third period, he was chosen as the winner of the award, and the new car that went with it.

Then Wayne Gretzky scored four goals, all in the third period. There was a hasty revote, Gretzky won, and Garrett presumably had to hitch a ride home. He still earned the win, though.

The Senators Double Down

You might assume that Garrett’s six wins would be an unbreakable record for the fewest by an All-Star goaltender. And if the NHL All-Star Game were really about honoring the best of the best, you’d be right.

But here comes that tricky “at least one player per team” rule again.2 In a normal year, that can result in some odd picks. But when you enforce that rule during an era of historically awful expansion teams, things can get downright silly.

It’s how we wound up with forgettable early-’90s All-Stars like Bob Kudelski, Brian Bradley, and Kelly Kisio. And it’s how we ended up with the owner of perhaps the worst stat line to ever be honored with a selection: Ottawa Senators goaltender Peter Sidorkiewicz.

Sidorkiewicz was a decent goalie who’d had some success in Hartford before heading to Ottawa in the 1992 expansion draft. That Senators team would turn out to be awful, and poor Sidorkiewicz had to bear the brunt of it. He played 64 games and led the league in losses and goals against.

That didn’t prevent him from being named to the 1993 All-Star team, even though he headed into the game with an almost unthinkable 4-32-3 record. Maybe it was pity. Maybe the Senators just didn’t have anyone else. Either way, Sidorkiewicz got the call.

Ironically, he didn’t end up being the lone Senators pick after all. This was back in the days when the league would honor players with a “commissioner’s selection,” allowing veteran players at the tail end of their career to get into the game. In 1993, one such pick went to Ottawa’s Brad Marsh, the journeyman defensive defenseman who’d plodded his way through a 15-year career with five different teams.

So the Senators actually sent two players to the All-Star Game that year: a goalie with four wins and a veteran with 23 career goals in more than 1,000 games. If there’s ever been a worse All-Star pairing from a single team, I’m glad I wasn’t around to see it.

Needless to say, Marsh scored a goal and Sidorkiewicz earned the win.

Who in the World Is That?

In 1998, the NHL decided to switch the All-Star Game over to a “North America vs. the World” matchup. It was a neat idea, and the league at least deserves points for creativity in trying to shake up a stale format. Unfortunately, it also turned out that while the league was top-heavy with flashy European stars, there weren’t always enough legitimate star-quality guys to fill out a roster.

The result is that the format is mainly remembered for two things:

• That time a run-of-the-mill line change prompted Bob Cole to randomly yell out, “The World is changing!”

• A lot of All-Star selections that make you look back and think, Wait, there’s no way that guy was really an All-Star.

That list includes players like Fredrik Modin, Espen Knutsen, Dmitri Mironov, and Sergei Krivokrasov. But let’s shine the spotlight on the man who represented the San Jose Sharks at the 2001 game: defenseman Marcus Ragnarsson.

Ragnarsson is probably best remembered for his rookie season in 1995-96, when he had eight goals and 39 points while earning a handful of Calder votes. Those would end up being career highs; he’d never again top 25 points in a nine-year NHL career. In 2000-01, he managed just three goals and 15 points, and yet somehow still wound up being named to the All-Star team. It wasn’t like he was a mercy pick from a bad team; the Sharks were pretty good that year, and Evgeni Nabokov also made the team. The World just needed another defenseman, and Ragnarsson ended up being the guy.

In a sense, Ragnarsson’s selection continued an underrated All-Star tradition: the sporadic recognition of the defensive defenseman. It doesn’t happen often, but every now and then a roster spot will go to a Ragnarsson, or a Scott Lachance, or even a Dave Manson or Garth Butcher.3 And we all just nod and go along with it, because hey, somebody has to stand up for the lowly stay-at-home blueliner.

Of course, that whole “recognize the underappreciated role player” thing can be taken too far, as we’re about to find out.

Milbury Tries to Drag His Knuckles

OK, this one is cheating a bit, since the player involved never actually suited up in an All-Star Game. But he was selected, and I’m going to go ahead and rule that close enough, so here goes.

Back in 1991, there was no league-appointed committee picking the All-Stars. The process was much simpler: The coach got to fill out the roster. And it worked well enough, right up until one of those coaches was Mike Milbury, who was named coach of the Wales Conference squad by virtue of having led the Bruins to the Stanley Cup final the year before.

As it turned out, Milbury had some, um, unique views when it came to roster selection. Specifically, he felt that the All-Star Game had become too heavily tilted toward flashy offensive players while failing to honor guys who played other important roles.

It’s not a bad idea, in theory, and you could make the case for one of Milbury’s controversial picks: Montreal’s Brian Skrudland, who’d developed a reputation as one of the league’s better checking centers. But Milbury went one step further. He didn’t just want to recognize defensive role-players. He figured that the league’s enforcers deserved some recognition too.

And so Milbury announced that his All-Star team would include Chris “Knuckles” Nilan, the Bruins’ tough guy. Nilan was actually a better player than you might remember, having recorded a 21-goal season in 1984-85, but by 1991 he was a fairly one-dimensional enforcer who’d go on to post 277 PIM in just 41 games.

Not surprisingly, people freaked out, accusing Milbury of making a mockery of the All-Star Game. “Why not give Sonny Corleone the Lady Byng award and make Dan Quayle a Rhodes Scholar?” asked one incredulous columnist. The league responded by stripping coaches of roster selection duties for all future games.

In the end, neither player actually dressed. In the weeks leading up the game, Skrudland injured his foot and Nilan broke his ankle, and both players had to be replaced. Nilan’s selection was mysteriously whitewashed out of All-Star history, but it happened. Chris Nilan really was named to an NHL All-Star team.

For his part, Milbury learned his lesson and never made a questionable decision about a player again.

The Worst All-Star Ever

So far, we’ve learned that other than Mike Milbury, there are three main things that really screw with All-Star rosters: terrible expansion teams, low-scoring defensemen, and the World Team format. So what happens when you combine all three? You get what was arguably the worst NHL All-Star pick ever made: Petr Buzek.

Buzek was a 22-year-old defenseman who’d played four career games when he was chosen by the Atlanta Thrashers in the 1999 expansion draft. As you may remember, that inaugural edition of the Thrashers was terrible.4 Buzek was one of the team’s better players, in the sense that he knew how to skate and which end of the stick went on the ice, and he went on to rack up five goals and 19 points in the 2000 season.

Those don’t sound like All-Star numbers, but the game that year was played under that North America vs. the World format, and the World was thin on the blue line (the roster also included guys like Petr Svoboda, Teppo Numminen, and Dmitry Yushkevich). At some point, the committee charged with putting the rosters together probably realized with a sinking sense of horror that it needed a European defenseman from the Atlanta Thrashers. Much to the consternation of fellow Thrashers blueliners Rumun Ndur, Pavel Balapnakov, and Sergei Vyshedkevich,5 they went with Buzek.

After his All-Star season, Buzek ran into injury problems and played just 14 more games for Atlanta over two years, recording zero points. He played parts of two seasons with the Flames, then returned home to continue his career in the Czech Republic. His career NHL totals: 157 games played, 31 points.

If that seems low, consider this: As of this morning, 19 players in this year’s game have more recorded points in the first half of this season than former NHL All-Star Petr Buzek racked up over his career.

Chicago Conundrum: Why Are There No Good College Programs in America's Best Basketball City?