The Marriage of Stats and Football 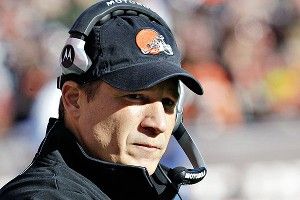 Want to know how big the MIT Sloan Sports Analytics Conference has become? In the middle of the football analytics panel that I appeared on, I referenced the research that has been conducted on the futility of icing the kicker, only for panel moderator Andrea Kremer to quickly note that those numbers probably didn’t apply to icing your own kicker, referencing Jason Garrett’s gaffe at the end of the Cowboys-Cardinals game from December. While it elicited some laughs from the crowd, there was one person in the ballroom watching the panel who probably managed to stifle his laughter: Cowboys head coach Jason Garrett. Awkward.

Garrett was one of several members of the Cowboys organization amid the 2,200 attendees at this year’s sold-out conference, a 50 percent increase on last year’s total. As you might suspect, football was better represented this year than ever before. In addition to the Cowboys, a handful of other teams had representatives attending the conference, including the Eagles, Giants, and Raiders. While the number of NFL attendees was at a record high, the half dozen or so teams who “officially” attended this year’s conference failed to come close to the nearly perfect attendance from the NBA. (I note “officially” because some teams will send consultants or representatives without identifying them as members of their organizations or by listing them as members of economics firms or think tanks. This was the case, for example, with the San Antonio Spurs.)

This was my fourth trip to Sloan, but my first time speaking on a panel. I hopped onstage with Kremer, former NFL head coach Eric Mangini, 49ers Chief Operating Office Paraag Marathe, and free agent pass-rusher Matt Roth to discuss the presence of analytics within football, the ways that players and teams interact with new ideas, and the possibilities for implementing analytics in the future. I came out of the panel with three big takeaways.

• I actually agreed with Eric Mangini a lot.

I hadn’t met Mangini before the panel, but I knew heading in that he was a smart guy, even if he occasionally used his brainpower for evil. I didn’t suspect that he was as comfortable with the idea of using analytics and statistics, though, until I read Michael Holley’s War Room a few days before the panel. In the book, Holley notes that Mangini fell in love with Danny Woodhead before the 2008 NFL draft because Mangini’s algorithms and identifiers for professional success suggested that Woodhead was a star. During the panel, Mangini noted that Woodhead’s numbers “popped.” Mangini wasn’t about to say what those numbers were, but it’s no surprise that the Jets pursued the former Chadron State star as an undrafted free agent after the draft. After Mangini was fired following the 2008 season, Rex Ryan cut Woodhead, only to see the player fill a rotation role as a running back for Gang Green’s archrivals in New England.

Mangini and I agree about the area where analytics can offer the most possible impact: scouting and drafting players. Teams should never draft a player solely based upon a metric or an algorithm, but considering that they have reams of physical, psychological, and performance data on players heading into draft day, it seems logical that a good organization would look back and try to identify which pieces of information should be weighted more in the process of evaluating players.

Marathe gave a good, concrete example of how working with and manipulating existing analytics can produce useful information, even for players from the past. I made a reference to Jerry Rice’s famously slow 40 time and Marathe noted that Rice’s slow 40 was offset by an extremely fast final 20 yards. The final 20 yards of a combine 40 aren’t directly measured, but because the first 10 and first 20 yards are, Marathe found Rice’s figure for the final 20 yards by subtracting his overall 40 time from Rice’s 20 time. Marathe pointed out that this intuitively made sense as a more meaningful metric, as those final 20 yards would represent Rice’s ability to separate from a cornerback when he was at full acceleration.

Where I was really surprised to see Mangini and I agree was in the process of “scouting the scouts.” Before every draft, of course, team scouts produce hundreds of reports on the eligible players in the draft pool. Those reports remain in the team archives and cover both those few players the team selected as well as the larger player pool that goes elsewhere. Doesn’t it make sense to look back at those reports to get an idea of what each scout is best and worst at evaluating? Maybe one scout does a better job of evaluating defensive backs than he does offensive linemen, or another is more effective at identifying players who are higher injury risks than others. Maybe some of your scouts just suck. I’ve heard some accounts that teams are hesitant to embrace those processes (perhaps afraid by what they might find), but Mangini suggested that it was essential and important for a healthy organization. He’s right.

• There’s a disconnect between the numbers and the intangibles.

During that draft discussion, Kremer brought up Tim Tebow and the idea that there are aspects of a player’s performance that aren’t measurable by the numbers. Roth rightly noted that winning trumps everything, but I think there’s something to consider here with regard to how we measure the “intangibles” and how they relate to winning football games.

Obviously, Tebow’s reputation coming out of college was as a great leader and a winner who was capable of willing his team to great performances. College scouts would have noted that by talking to his teammates and coaches, and in preparing a scouting report on Tebow they would have slapped a grade on his abilities as a leader.

Tebow’s actual ability to lead a team is irrelevant here; the grading process is what I want to focus on. It’s absolutely true that leadership and poise and other intangible factors are important and play a role in winning football games, even if they don’t show up in a box score. That’s fine and dandy. When a scout measures and grades a player’s leadership, though, what do you think that scout is creating? It’s a statistic, albeit a qualitative one as opposed to a quantitative one, but it’s a testable measure of value. Do players with fantastic grades for intangibles like leadership succeed more than players of similar athleticism and performance backgrounds who have average or poor grades in those qualitative categories? Does it matter more for a first-round pick than it does for a fifth-round pick? For a quarterback as opposed to a defensive tackle? All those things matter, and while they might not produce statistics that show up on Sundays, their relative importance can be analyzed as part of the bigger picture on draft day.

Of course, the other thing worth considering is that a scout might be able to better measure a player’s on-field performance than his psychological makeup. Mangini recalled that one old scouting report suggested that a certain defensive back suffered from a lack of toughness that would retard his progress at the professional level. That player? Four-time All-Pro Rodney Harrison. Oops.

• While football might be light years behind basketball by most measures of analytics, there might be one place where it’s ahead.

While Sloan panels cover everything from baseball to gambling to e-gaming, the most prominent topic of discussion is basketball. In addition to the boss’s presence on multiple panels, one of the conference’s organizers is Rockets general manager Daryl Morey. That’s because the development and implementation of analytics in the NBA is far, far beyond that of NFL teams. Why that is will be another topic on another day, but the one notable lament of quantitative analysts and general managers across the NBA is that they struggle to get their players to implement the findings of their research on the court. The notable exception is Heat forward Shane Battier, as famously referenced in Michael Lewis’s 2009 feature on the statistical revolution in basketball. While their research shows up in everything from draft selections to lineup configurations, players have not exhibited a significant ability to change their games to account for statisticians’ findings, even if there’s evidence that it would help. (Alternately, if teams have found players who are statistically inclined beyond Battier, they’re not telling.)

Football analysts and coaches, though, might do a better job of communicating basic levels of research to their players by exploiting the importance of particular situations. Mangini told a story about working with an overzealous Rob Ryan, who served as a coach alongside him in New England and Cleveland. Ryan was anxious to share the tendencies he had discovered with his players and ensure that they’d be ready for every situation on game day. How anxious? He prepared a list of 50 statistics and tendencies and told Mangini he planned to go through each of them with the team on the Wednesday before their upcoming game. Mangini wisely suggested that Ryan pare his list down to a top 10, and both Mangini and Ryan have done so ever since. (When Mangini told Ryan to edit the list down to 10, Ryan apparently told Mangini that he had already had to take some numbers out to get it to 50.)

Roth, who played for Mangini and Ryan in Cleveland two years ago, then noted how he’d keep a statistic from the top 10 in his mind during game day. Perhaps a team would run the ball 80 percent of the time out of a one-back formation on second-and-long, or they would throw to the middle of the field 75 percent of the time inside the opposition’s 10-yard line. By knowing those small facts, Roth would have an idea of what to expect from an offense before the play even began. That’s not exactly rocket science, but it’s a tidbit of information mined from play-by-play that can help a team win a football game at the right time.

On the other hand, football players aren’t exactly desperate to be flooded with numbers. Kremer asked Roth if he would want to hear about numbers during a game and he began his answer with, “Well, it has its place …” before ending with, “I do not want to hear the numbers on the sideline. No,” to a chorus of laughs about his honesty. Even the stats geeks in the audience (and the one on the panel) realize that there’s a time and place for using statistics in football.

Avenging a Miracle: Carolina Strikes Back