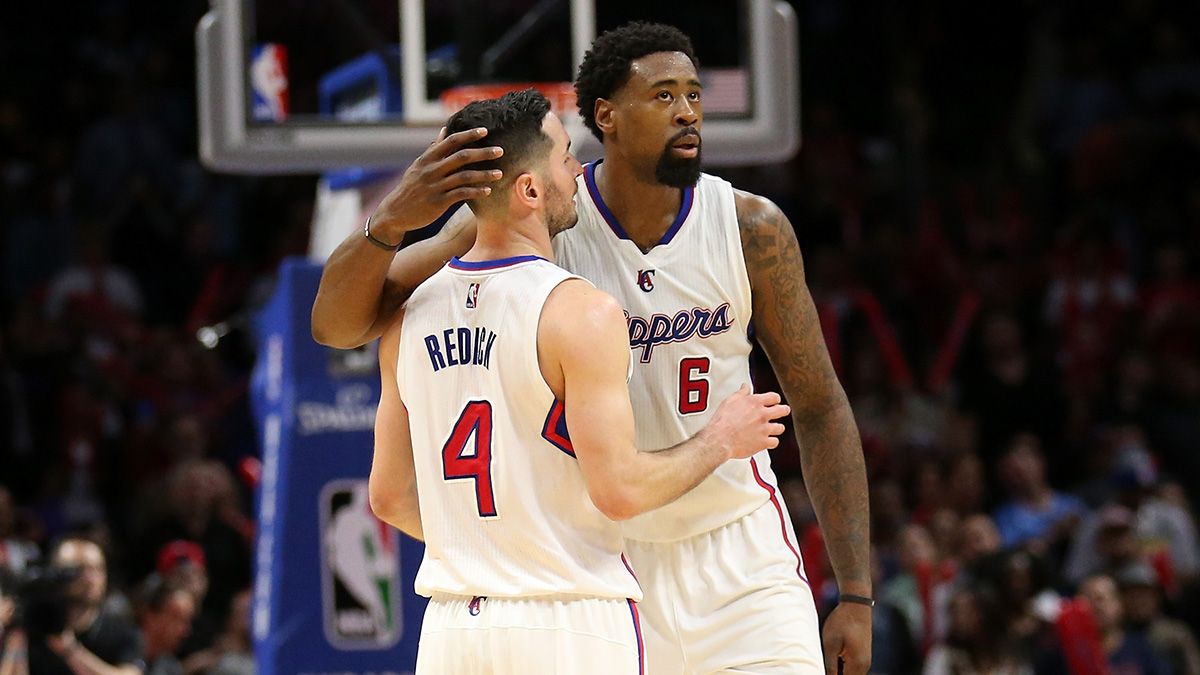 Zach Lowe talks to J.J. Redick about the DeAndre Jordan saga, emoji, Twitter, free agency, and what’s next for the Clippers.

Below is an excerpt from the podcast.

On Tuesday, you gave an interview to Bleacher Report Radio where you just hammered the Clippers: F-minus offseason, DeAndre was the only thing we had to do and we couldn’t do it. But we’ve since learned that DeAndre had [already] reached out to at least Doc Rivers, saying, “I don’t know if I really want to go to Dallas.” Had that noise gotten to you? Was that [interview] an orchestrated event?

No, it wasn’t orchestrated. I actually gave the interview on Monday, and Ric Bucher had tweeted out things on his account on Twitter about the F-minus grade. I didn’t really think anything of it because nobody really responded. And then it became a big deal on Tuesday. It just seemed like it was a very, very slow news day. I got word that it was the lead story on PTI and got some texts from Ramona Shelburne saying she was going on ESPN in 20 minutes and did she want me to clean it up. And I was like, “No, I stand by what I said.” I wasn’t necessarily hammering the Clippers, but I was giving an honest assessment of results. And our result was, we weren’t able to retain our top priority and we had no cap space to go out and get a replacement. So, in my eyes — regardless of the Paul Pierce signing — we had failed in free agency because DeAndre was that important. It wasn’t a knock on Doc or Ballmer or anyone else. It wasn’t a knock on Paul. It certainly wasn’t a knock on the Lance Stephenson trade. It was more just, I felt, you know, our job was to get DeAndre back and we didn’t do that.

So when do you become aware that DeAndre is having cold feet?

I was at swim class with my son — he’s 10 months old — and it’s like a 30-minute class. We do it every Tuesday at 11:30 in the morning, and I was finishing up, we were drying off, and I looked at my phone and I had a ‘Call me ASAP’ text from Doc. So when I called him, he’s like, “First of all, you’re not getting traded.” That’s every player’s fear when they get that text from their coach or GM — and in this case both. So I was happy. And [then] he just laid it on the table. He said, “Hey, you know, DeAndre wants to come back. We’re going to Houston.” I said, “Great.” You know, he texted me the details of where I need to be and when I need to be there.

But I had to wait. My wife was gone in the morning, so I had to wait for the nanny to get there. She comes at nine. And so, so I’m with my son that morning, the nanny gets there, and, you know, I go get ready, hop in my car, I drive to Houston.

This is Wednesday morning?

Yeah, this is Wednesday morning. I was actually, oddly enough, on the phone with my financial adviser as I’m pulling into Houston. We were discussing something, and I told him what I was doing and I was like, “Yeah, it’s really weird the story hasn’t broke.” And then I hung up the phone, and I get to the hotel and Marc Stein puts it out there. [Then] I was scrolling through my timeline, and I saw a plane emoji. You know, “Chandler Parsons to the rescue, yay!” And I’m just like, all right, we’re going to tweet out a car. I’m already there! I was in the suite we were all going to meet at prior to heading over to DeAndre’s.

And the rest of it is you guys are literally just chilling for eleven hours, basically.

Yeah. [Laughs.] Well, at about 5:30 Central Time, I was like, “This is done.” I’d had my chicken, I’d played some spades. My wife had to leave Thursday morning for Florida, and she’s like, “I gotta pack.” So I’m like, “All right, I gotta get back to Austin.” [But] I was so amped that I’m following along with Blake [as I drove], I’m like, “Hey, Blake, what’s going on? What’s going on at the house? Blah blah blah.” I was talking to my agent, I called Chelsea, I’m driving, and I’m like, I gotta be getting close to Austin. Like, what the hell? I’ve been driving forever. And so I look down at my phone and I was in San Antonio. I had driven an hour and a half out of the way.

You were seriously amped! And you’re getting updates from in the house. And the updates are basically like, “Nothing’s happening. We’re just hanging out.”

Yeah. Meanwhile, though, right, we’ve got this hostage crisis. I mean … let’s talk about something real quick. Because I read some of the stuff yesterday. And it’s like, “Oh, this is like a mockery of this five-billion-dollar business.” And yeah, there were some emojis being tweeted out, but, like, it was all in good fun. Our meeting was very serious. DeAndre’s decision was very serious.

Having said that, Wednesday was the best day on Twitter, maybe ever.

Ever. But back up a second: Who was the first to arrive on the scene, and how did that whole scenario unfold?

It’s funny, because Blake and [DeAndre] were at dinner the night before taking pictures. And I’m like, how is this not on the Internet yet? But whatever. We all met at the hotel, we head over to DeAndre’s, and the rest is basically what’s been put on Twitter with less drama. It was a meeting. And that was a very short meeting. [Then] we broke out into a casual conversation. I think Doc was like, “DeAndre, we’re staying to 11:01 a.m. or whenever you can sign your contract.” DeAndre said, “Cool, let’s get some food.” His parents went and got some chicken for us, and Paul, CP, DeAndre, and me just all started playing spades on the kitchen table. There wasn’t as much pitching as I anticipated. I think his heart was in L.A.

My favorite tweet was Paul Pierce not understanding how to use emojis properly.

I’m still not sure why [Paul] tweeted that out, because he’s got a couple of emoji apps on his phone, neither of which I had ever heard of. He’s got some crazy ones, and he’s got, like, these emojis I’ve never seen before. And so I don’t know why he couldn’t type that emoji into his actual Twitter feed or whatever. It was bizarre. I have no idea. I still am unsure as to why it was a picture of a spaceship emoji and not an actual spaceship emoji.

Do you feel like DJ owed Dallas a phone call? I know that’s an awkward question.

That’s a great question. The answer is probably no.

Yeah. I essentially committed to Flip. There were still some things to be worked out, the trade kicker, and, you know, Doc calls me and says, “Hey, if we get to this salary, will you come?” And I was like, “Yeah, if you get there.” And when they did, you know, my agent called Flip. [It] was not on me to call Flip. My agent called Flip. Two days later, when Donald Sterling decided he didn’t want to do the sign-and-trade with me, because he thought I was a bench player or because I was white — I’ve heard both stories — I didn’t get a call from Donald Sterling. [That was] the agent’s job. So I’m not really sure why Dan Fegan wasn’t the one calling Cuban. I don’t know. I can’t speak for Dan Fegan, but I’m confused by that whole relationship.

Let’s talk about the chair barricading the door …

There was some discussion over what was actually going to be barricading the door.

I don’t remember when that posted. It seems like that posted after you left?

Yeah, it was after I left. A sofa had been suggested. [They] went with something a little more subtle.

But the doors are not locked, right? The house is open. I mean, it’s a gated community, apparently, so it’s not like I can walk up.

Were there any other ideas pitched? I mean, sofa is ambitious. You need like three people to move the sofa.

What are the things called — hutch or buffets? Like the big kind of furniture?

Yeah, I know what you mean.

But that would involve some really serious lifting, which, you know, moving a 20-pound Pottery Barn chair is not too hard for Blake.

Blake is a funny guy. We all know that. And not only was the picture funny, but his comment was hilarious. He’s got a good sense of humor.

Is there any part of you that feels bad for the Mavericks? That five days passed and now they kind of don’t have a team, and they have to scramble. Is that just life? Is that just life in big business?

I guess you have to feel for them a little bit. [But] this happens all the time in every business. Someone used the analogy yesterday of closing on a house. I’ve signed a contract on a house. I was selling my house in Florida right before the market crashed, and I was going to make some money, and guess what. Somebody backed out. It happens. And when I sold it three years later, I took a loss. Those things happen — those things happen in life. So I feel bad for the Mavs, for sure, but it’s part of it. And this is not the first time it’s happened; he’s not the first time a player has done this, and [he] won’t be the last. The Clippers tried to do this to me. So this stuff happens. It happens.