The Kawhi Leonard Conundrum, and Why Life Is Unfair 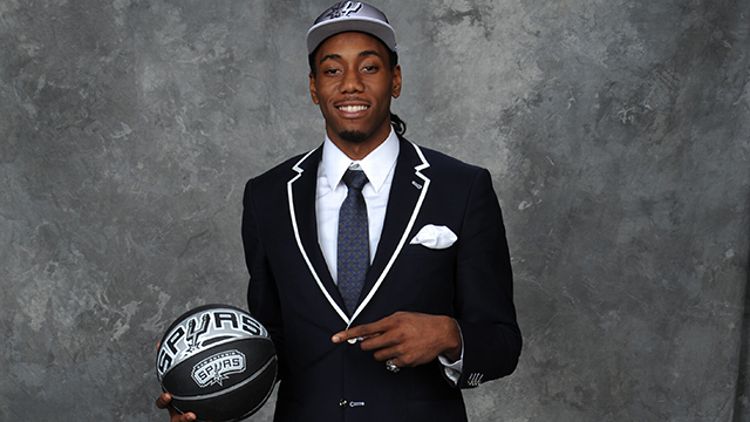 Rooting for a perpetually hopeless franchise will drive you insane for a number of reasons. You know this. But you know when it gets really bad? The playoffs, when you have to watch players your team passed up dominate on another team. Actually that’s not it, either. It gets REALLY bad when you watch someone like Kawhi Leonard dominating for the Spurs and realize that this never would’ve happened if he’d landed with your team.

This epiphany is the most crushing truth of them all.

I’m speaking from experience as a Wizards fan, and after a month of watching the NBA playoffs, we need to talk about this for a minute. The Wizards passed on Leonard to draft Jan Veseley in 2010. It seemed crazy at the time and has only gotten worse as the years have passed. But if we’re being honest here, watching Leonard blossom into a two-way star for the Spurs isn’t even what’s frustrating. It’s knowing that if Veseley had been the one who was drafted by the Spurs, he’d probably turn into a weapon for years to come, and if Leonard went to the Wizards, he’d probably turn into an über-athletic wing with limited skills who becomes indistinguishable from about 50 other wing players in the NBA.

As Jeff Van Gundy said Thursday night while Leonard helped finish off the Warriors, “He knows who he is, and he plays to his role.” On a bad team, Kawhi Leonard probably never finds out who he is or what he’s supposed to do, and his role changes by the month. Because that’s how bad teams operate.

And yeah, we’re using Kawhi as an example mostly because it gives us an excuse to remember his draft-night suit (look at those lapels!), but it applies to all sorts of players and teams. Sticking with the 2011 draft … Does Klay Thompson become Klay Thompson if he lands with the 2011 Bobcats instead of the Warriors two picks later? How much worse does his life become if he’s stuck developing between Gerald Henderson and D.J. Augustin?

Does Serge Ibaka become a star if he’s a top-five pick asked to contribute immediately on a bad team? Or to take the most obvious example: Paul George, who suddenly looks like a future NBA superstar. Simmons mentioned last week that the Clippers could’ve kept their pick in ’09 and taken George over Al-Farouq Aminu in 2010, giving them a murderous core for the next decade. But let’s say they still traded the ’09 pick and just drafted Paul George over Aminu. There’s no way George develops fast enough to convince the Clippers to keep him out of the Chris Paul discussion a year later. And in that case, he probably gets traded to New Orleans (just like Aminu), which leaves us wondering … does Paul George become a budding superstar if he’s stuck on a 30-win Hornets team the past two years?

You get the idea. We’re dealing in hypotheticals here, but in a playoff season when Paul George, Kawhi Leonard, Mike Conley, Jimmy Butler, Roy Hibbert, and Klay Thompson have all come away looking like potential stars, it’s fair to wonder whether any of them would have panned out like this if they went to teams where they played 40 minutes a night surrounded by mediocre veterans and overwhelmed, undisciplined rookies. It’s a nature-vs.-nurture question, I guess. And we’re not taking away from how great guys like Leonard and Conley were to begin with, because they all had the talent by nature. The conclusion instead: The NBA has a lot more players with potential star nature than players who actually get nurtured into stars.

If you wanted to get real socioeconomic with all this, you could compare it to the way society works: Plenty of people have the skills to be massively successful, but certain rich kids have built-in advantages to protect them along the way, while people from lower-income backgrounds have a much smaller margin for error. So the ruling class stays entrenched save for a few strokes of luck where someone like 50 Cent becomes irrationally wealthy and powerful. (The Wizards’ best hope is to get shot nine times and invest in Vitaminwater. Everything is horrible.)

But anyway, that’s not the point. We’re not talking about real life. It’s sports that are crushing our soul here, and we’ve got several factors working against mediocre NBA teams:

1. Aside from a handful of outrageous prospects who pop up every decade, most potential stars need great coaches to succeed.

2. Great coaches gravitate toward great players when they choose their next team. Stan Van Gundy is not signing on to coach the Sixers this summer.

3. Good management chooses the right players, but choosing the right players only gets you so far if you’re dealing with the first two problems. (I.e., someone like Chris Singleton was a great pick at no. 18 in 2010, and he would probably help a good team, but on the Wizards the past two years, he’s been more or less hopeless.)

4. Good management is rare on its own, and owners with bad players and bad coaching are generally reluctant to fire bad GMs and have to pay two contracts at once, because they’re already spending plenty of money on a bad team.

It’s something to keep in mind as you hear friends say “How was it EVEN POSSIBLE for Kawhi Leonard to fall to the Spurs?”

The NBA lottery is next week, and there’s a reason we see the same teams there every year. The NBA has a reputation as a “players’ league,” while a sport like the NFL is supposedly dominated by management, but if you look at the most successful teams in the NBA, it’s about more than just players. Look at the playoffs. For all the talk about major markets in the NBA, we’re probably looking at a conference finals featuring teams from Indianapolis, San Antonio, and Memphis. The small markets can compete because even if they’re not spending Knicks or Lakers or Nets money, the combination of good coaching and smart management gives them serious advantages over the rest of the league. (Also: The Spurs are pure fucking evil, which always helps.)

How does a terrible team get to that level? A lot of this is luck, which then leads to the rest of the organization getting better. Win the lottery and fall into the next superstar (Derrick Rose with Chicago, which ultimately helped the Bulls land grumpy genius Thibs), somehow stumble into a fantastic coach (Frank Vogel with Indiana, Gregg Popovich 17 years ago with San Antonio) who develops the rest of the roster, or get lucky taking a risk on borderline stars and project prospects (Z-Bo and Marc Gasol with Memphis). Otherwise? Teams like the Spurs and Pacers will keep turning potential stars into actual stars, while teams like the Wizards and Bobcats and Suns and Raptors remain stuck in lottery no-man’s-land, hoping they strike gold somehow. In the meantime, fans of those terrible franchises have plenty of Kawhi Leonard highlights to drive us insane.

The rich stay rich, the poor stay poor, and Kawhi Leonard and Paul George give us nightly reminders that SPORTS ARE THE WORST. (Especially if you’re a Wizards fan.)