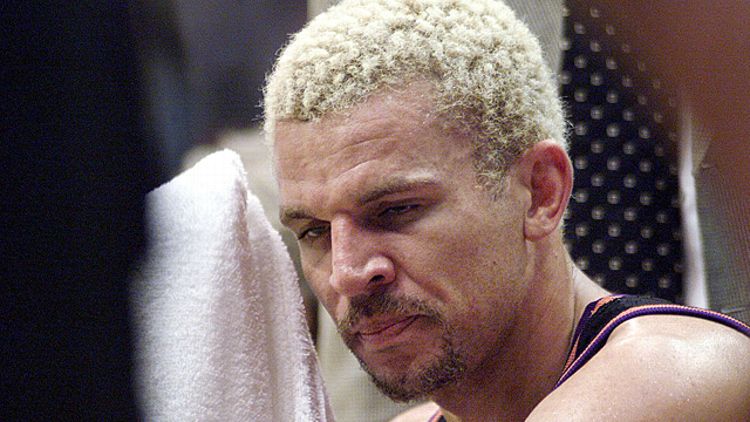 Jason Kidd is a human with a cell phone so I sent him some text messages.

Kidd: you don’t think so?
Me: question:
Kidd: yeah?
Me: did you know you have four guys on your roster that were born in the ’70s?
Me: that’s pretty crazy, probably. I mean, Gerald Ford was president. GERALD FORD, bro.
Kidd: well
Kidd: I guess I’d not thought about it. I mean, I’m only a few years older
Me: YEAH BUT YOU’RE THE COACH. COACHES ARE OLD. PLAYERS AND COACHES SHOULD NOT HAVE BEEN IN HIGH SCHOOL TOGETHER
[No response.]
Me: You should have a trainer for your team but then you should also have one of those guys that puts makeup on dead people so they look at least a little alive. Hire one of those guys too. You know, because of the heart attacks and stuff.
Me: I remember playing high school basketball and this one practice our coach came out and played with us. I don’t remember how old he was. Maybe 100 or something. But he started playing and, hand to God, all of his tendons just exploded. That’s a fact.
Kidd: tell me more about how you played high school basketball
Me: … dang

Me: Hey, did you ever apologize to everyone for your dyed hair that you had in phoenix?
[No response.]
Me: all right cool ttyl

Kidd: Shea?
Me: yes?
Kidd: what was high school basketball like?
Me: dude
Kidd: were you really good?
Me: come on
Kidd: tell me about your game strategies, because high school basketball is just like the NBA
Me: bro
Kidd: I know the most pressurized moments in my basketball career were 10th-grade games
Me: how long are you planning on doing this?
Kidd: I remember this one time I had a late game and then when it was done I got home at like 10:30 so I only had about 45 minutes to play video games before I went to sleep
Me: OK, I get it, OK
Kidd: when we were in Game 2 of the NBA Finals against the Heat and we were down 15 points in the fourth quarter and already down 1-0 in the series I remember thinking, “man, this is nothing compared to JV scrimmages”
Me: I’m not talking to you anymore
Kidd: and we also had to lift weights once a week back then
Kidd: and they made us jog like a mile each day at practice
Kidd: AND ALSO SOMETIMES THEY SOLD NACHOS AT OUR GAMES FOR $0.50 AND SO THERE’D BE LIKE 75 PEOPLE IN THE STANDS AND IT WAS TOTALLY PACKED
Kidd: hello?
[No response.]
Kidd: Shea?
[No response.]
Kidd: Shea, tell me more about high school basketball.

Me: hey, but for real I used to think you were a Mexican and I thought that was super dope.
Kidd: what?
Me: When my uncle would tell me I should play baseball instead of basketball because there weren’t any Mexicans in the nba I’d always be like, “But what about Jason kidd?”
Kidd: that’s cool, I guess
Me: It was. Why are there so few Mexicans in the NBA though?
Kidd: I don’t know. I’m not the king of Mexicans
Me: I coach middle school basketball and the school is mostly Chicano so I give a lot of the players NBA-inspired Latino nicknames. Last year we had a LeJuan James. We also had a Miguel Jordan.
Kidd: tell me more about coaching middle school basketball, shea
Me: jesus christ. bye, Jason.

Baseball Scout School, Part 3: How to Write a Scouting Report