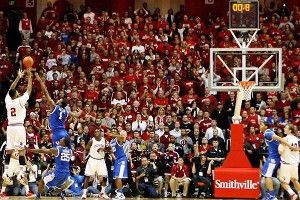 We asked Mark Titus for five predictions before Friday’s March Madness games. Here’s what he had to say about tonight’s matchups …

TBS won’t show Christian Watford’s game-winner against Kentucky more than twice
Forget Norfolk State over Missouri and Lehigh over Duke — if this happens tonight it will undoubtedly be the biggest upset of this tournament, and maybe even any tournament. I’m putting my credibility on the line by making a prediction as absurd and unlikely as this, but some small part of me wants to give TBS the benefit of the doubt, if for no other reason than every time you expect something to happen in the NCAA tournament, the exact opposite seems to occur. Just so we’re clear: This prediction only applies to the two-hour block for the Kentucky-Indiana game, because I’m sure we’ll see the shot a hundred times leading up to the game. But once Greg Gumbel or Ernie Johnson and the rest of the guys in the studio toss it over to whoever is calling the game, Watford’s shot will be shown two times at the most — right before the opening tip, and either at halftime or toward the end of the game if it’s close.

Ohio and Indiana, the two biggest underdogs this weekend, will beat the spread
My idea of gambling is allowing Freda and her peach fuzz goatee to make my sandwich at Subway and taking a no. 2 at my in-laws’ place without a plunger on hand, so the worst thing you could possibly do is interpret this prediction as advice. That said, I think there’s a good chance Ohio will lose to North Carolina by 10 points or less, and Indiana will lose to Kentucky by nine or less. Most of my confidence in Ohio comes from assuming Kendall Marshall isn’t going to play for the Tar Heels, which will be huge for the Bobcats. Marshall is vital to Carolina’s offensive attack, and I also don’t think his replacement, Stilman White, can guard Ohio’s D.J. Cooper.

As for Indiana, well, because it took Watford’s buzzer-beater for the Hoosiers to steal a win against Kentucky, everyone seems to forget that IU completely outplayed the Wildcats for most of the game in their first meeting. I know it was in Bloomington, I know it was just the ninth career game for Kentucky’s slew of freshmen, and I know Anthony Davis battled foul trouble all game, but that doesn’t mean the win should be dismissed as a fluke. Anyway, I don’t think Ohio will be able to handle North Carolina’s frontcourt and I don’t think Indiana has what it takes to beat Kentucky twice in the same season, but I expect the games to be closer than Vegas thinks they’ll be.

We’ll see at least one boring pregame speech from a coach
Thanks to Hollywood and Jim Valvano’s legendary ESPY speech, it’s far too common of a perception that coaches deliver compelling and/or entertaining pep talks before big games. The truth is, a majority of coaches are terrible at it. This is something that is confirmed every time a network puts cameras inside the locker room and catches the coach saying something generic like, “Just go out there and play your game. Give everything you have for 40 minutes and the rest will take care of itself. Now bring it in!” But for some reason, even though 99 percent of the general public thinks the pregame speeches are dull and maybe even a little awkward, broadcast crews continue to show them. That’s why I’m predicting that tonight, CBS or TBS will have cameras in one of the locker rooms, we’ll momentarily get excited because we’ll forget that most pep talks are awful, and once the pregame speech is over we’ll think to ourselves, That was … kind of boring, actually.

A double-digit seed will win
As great of a Cinderella story as it would be for Ohio to knock off North Carolina, I just don’t see it happening, even if the Heels play without Marshall. But I do think Xavier and/or NC State will pull off an upset. It will probably be tougher for Xavier to beat Baylor than for NC State to beat Kansas, because Baylor has looked great in their first two tournament games (without hardly any production from their best player, Perry Jones III) and Xavier has had a couple of close calls against Notre Dame and Lehigh. But still, the Musketeers have two elite scorers in Tu Holloway and Mark Lyons, and a serviceable big man who is coming off the best game of his career in Kenny Frease. It’s been proven many times that that’s more than enough to win in the NCAA tournament, even in the Sweet 16 against a team as good as Baylor.

And I’ve said it before about NC State, but I’ll say it again because I don’t mind plagiarizing myself: Despite what their seed might lead you to believe, the Wolfpack are for real and shouldn’t be considered a Cinderella team. After dropping four in a row in late February, NC State is playing its best basketball of the year and is one bad no-call against North Carolina in the ACC tournament semifinals away from entering tonight’s game on a seven-game winning streak. (Well, if they would’ve beaten Carolina they would’ve had to play Florida State the next night, but you get the idea.) Meanwhile, Kansas was lucky to escape with a win against Purdue on Sunday night, Tyshawn Taylor isn’t having a great tournament, and KU has shot pretty poorly from behind the arc in its last two games. So if Richard Howell and C.J. Leslie can contain Thomas Robinson and Jeff Withey, there’s reason to believe the Wolfpack can take down the Jayhawks.

Greg Anthony will stop pretending that everything Kenny Smith and Charles Barkley say is compelling
For two weeks now, Anthony has done a hell of an acting job by making a serious face and nodding in agreement as Barkley and Smith talk. Tonight, he’s going to reach his boiling point. Ideally, he’ll have an outburst and actually attack them by saying something like, “Do you have any idea how many college basketball games I’ve watched this year? Because it’s pretty obvious that before this tournament, neither of you assclowns watched a single game. I just want you to know that you’re undermining all the work I’ve put into this season and embarrassing this network in the process.” It’s a lot to ask for, but I’m crossing my fingers that he’ll pull a Willy Wonka and follow that up by saying “Good day to you both” as he walks off the set, and as Barkley and Smith start to respond, he’ll turn around and sternly yell, “I SAID GOOD DAY!”

Anyway, even if that doesn’t happen, I think we’ll at least see Anthony stop pretending to care about Smith and Barkley. And if we don’t, the man deserves a significant raise and some sort of acting award.