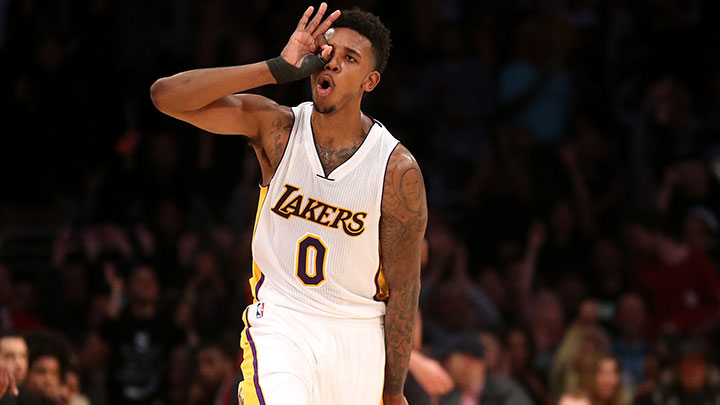 Nick Young is a professional basketball player. He is from California. He plays for the Los Angeles Lakers. He has been in the league for eight years.

Swaggy P is Nick Young’s alter ego. He is from Alpha Centauri. He currently plays for freedom — a freedom that you and I will never know, let alone understand. He has been in our spirits forever.

Nick Young and Swaggy P mostly look the same, they sometimes act the same, and they (probably) smell the same, but there is a fundamental difference between the two, a philosophical separation so pronounced that even the mechanical neurobots who run Google are able to differentiate it.

This is what it looks like when you search “Nick Young” in Google Images: 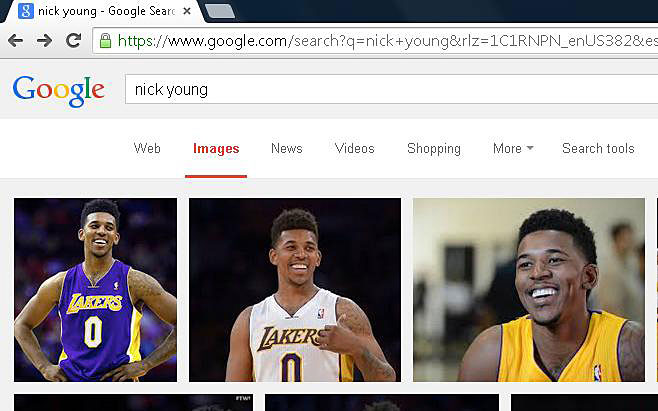 That’s Nick Young. He is a man with a happy, charming, openmouthed smile and round ears. That’s him. That’s all you need. There aren’t even any subcategories up top.

This is what it looks like when you search “Swaggy P” in Google Images: 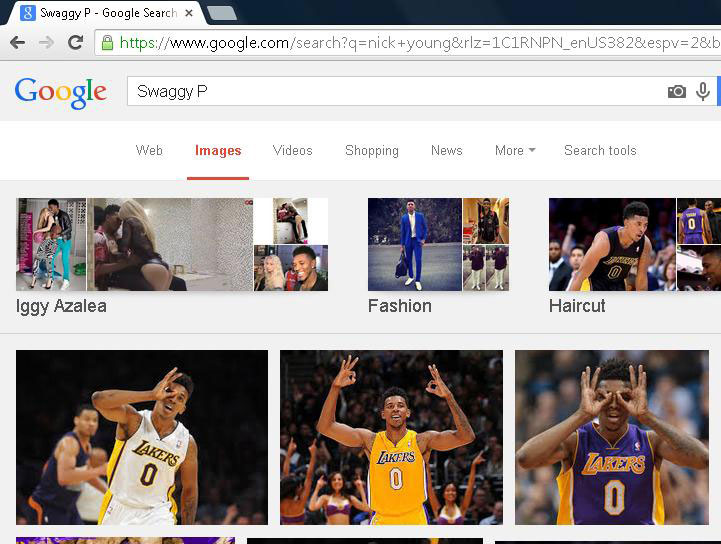 Here is a Nick Young GIF:

Here is a Swaggy P GIF:

See? You get it. Separating those two is easy. But separating the different layers of Swaggy? That’s a whole other kind of thing.

Swaggy P does not exist unilaterally. There are layers, levels, and stations of Swaggy as it pertains to Swaggy P. There is a continuum. At one end, there is “No Swaggy,” which contains a lesser amount of Swaggy than we are used to seeing Swaggy P exhibit, although it still contains a higher concentration of Swaggy (despite what the name might suggest) than most people even in the uppermost reaches of “Regular”1 will ever be able to demonstrate. I understand that’s a bit of a dense description, so here is a chart: 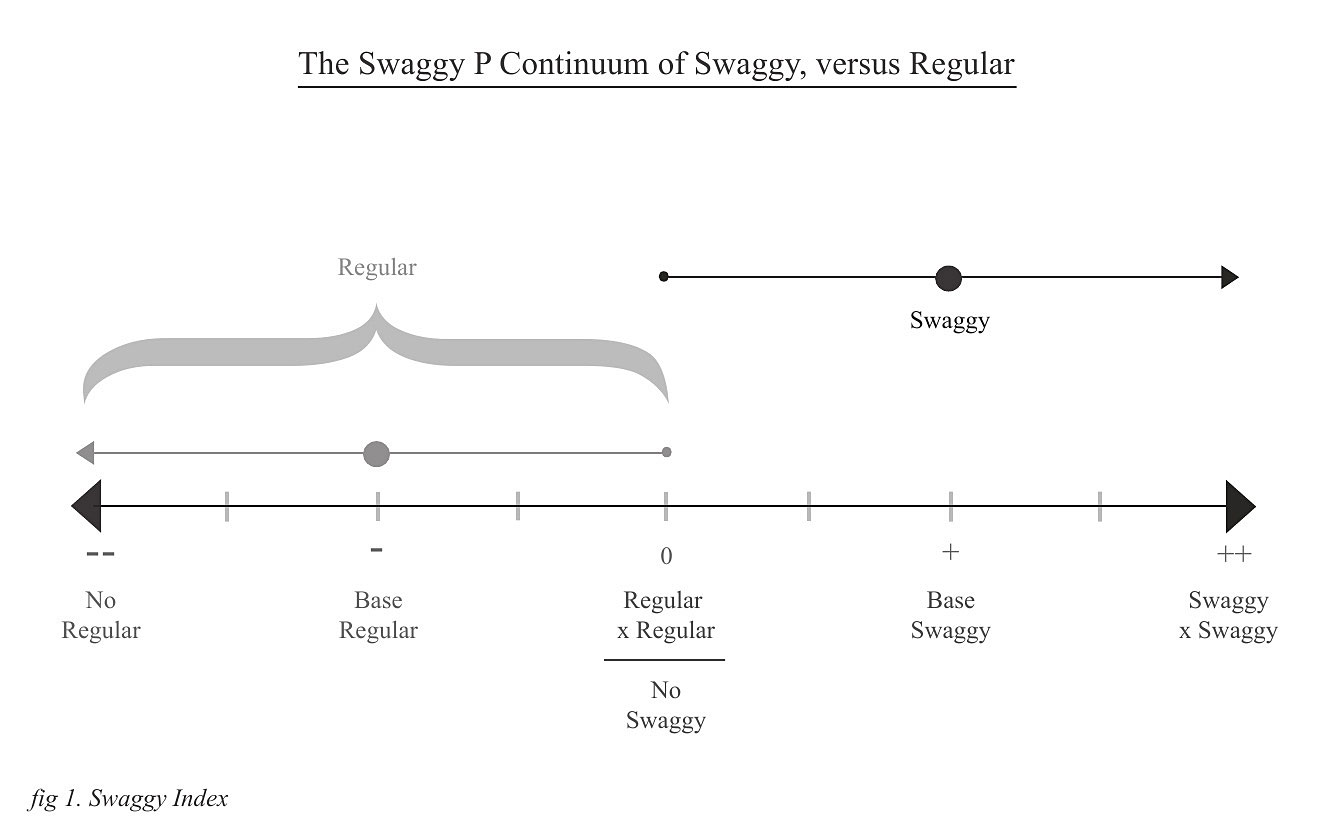 You and I and everyone else, we’re all on the left end somewhere. “No Regular” is the lamest, weakest of us, and I would like to make a J. Cole joke here, but I will not, even though saying I won’t was actually just a way to do it, which happens to be the second-most “No Regular” thing you can do, so there I am in “No Regular.” The most “No Regular” thing is to record “Crooked Smile,” obvs, so J. Cole is there with me, too.

“Base Regular” is average, so that is likely where you belong and will be forever.

“Regular x Regular” is where the very best humans belong. If we are going to keep this to basketball, some examples would be 2003 Duncan, 1996 Jordan, 2013 LeBron, 2004 The Professor from the And1 Mixtape Tour, Chandler Parsons when he hit 10 3s in the second half of a game last year, and that’s probably it.

The Swaggy continuum is special to Swaggy P, but it functions similarly to the Regular continuum.

“No Swaggy” is when Swaggy P does something that is less Swaggy than anything else he’s done. “Base Swaggy” is an average amount of Swaggy, which is still an inordinate amount of Swaggy and a level that only he can attain — quite easily, I might add. And then way to the right is “Swaggy x Swaggy,” which is Swaggy multiplied by Swaggy, which is like if you took two suns and mushed them into each other, except guess what? These two suns are both wearing Givenchy robes and rapping Drake’s verse from “Versace.”

This is the Swaggy P Continuum of Swaggy, along with some moments charted for clarification: 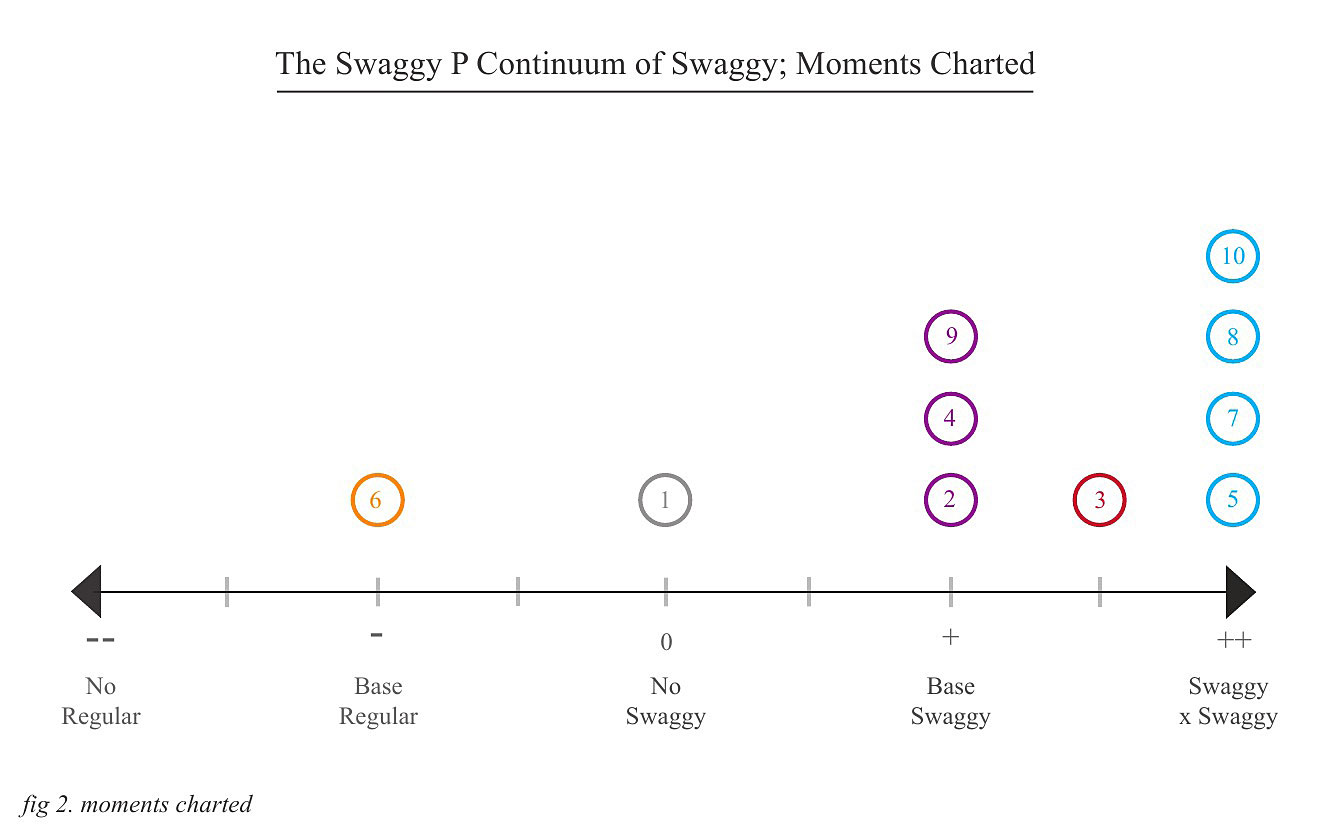 1. When he told Rolling Stone he wanted to make Kazaam 2.

Look at Shaq; he went out and had a movie called Kazaam. I’m trying to make Kazaam 2, with me as the star. We hope to push it to the theaters, but it might be straight-to-DVD [laughs].

This is a clip from Kazaam, which was mostly about a genie who yelled at kids in rhyme:

Do you know how fucking fast I would go watch Swaggy P in Kazaam 2? Possible plot: He plays Pazaam, younger brother to Kazaam. He shows up to New York and is weirded out by how different their culture is. But it’s cool because Pazaam is sweet and good-hearted, so he makes friends fast and everyone loves him. There’s one part when Pazaam is at a party and a guy is gonna do cocaine, but Pazaam takes it and mixes it with boiling water and has the guy inhale the steam because Pazaam thinks the guy just has a stuffy nose. There’s another part when a guy tries to rob Pazaam with a knife and Pazaam is amused like, “That’s not a knife, this is a knife,” and then he takes out a bigger knife. At the end, Pazaam and Sue Charlton go back to Australia and live there. Surprise. It wasn’t Kazaam 2, after all. It was a remake of Crocodile Dundee II because that movie was about 1 million percent better.

2. The time he celebrated with Pau Gasol.

I want to celebrate anything as passionately and freely as Swaggy P celebrates everything. He looks SO happy. I wonder what that’s like.

3. The time he said his right arm didn’t have any tattoos because it’s only for shooting jump shots.

No tats on the right arm Strictly for buckets

4. The time he got flagrant fouled and started trying to fight everyfuckingbody.

5. The time he threw the opening pitch at a Dodgers game.

Seems like it might be bad, right? But that’s because you don’t understand Swaggy currency. Most don’t, actually. Most people tried to make fun of him for this. But this wasn’t an accident. This wasn’t like when 50 Cent threw out the opening pitch. There are no Swaggy Mistakes. This is the advancement of brand. There is a precedent:

Being asked to throw out the opening pitch at a Major League Baseball game and then throwing it over the head of the catcher by 65 feet is “Swaggy x Swaggy.”

Getting to “Base Regular” is an aspiration a lot of good, hardworking people have. But for Swaggy P, a fall backward to “Base Regular,” which is what happened here, is like if you took a math test and you got a -300. It’s not that great. 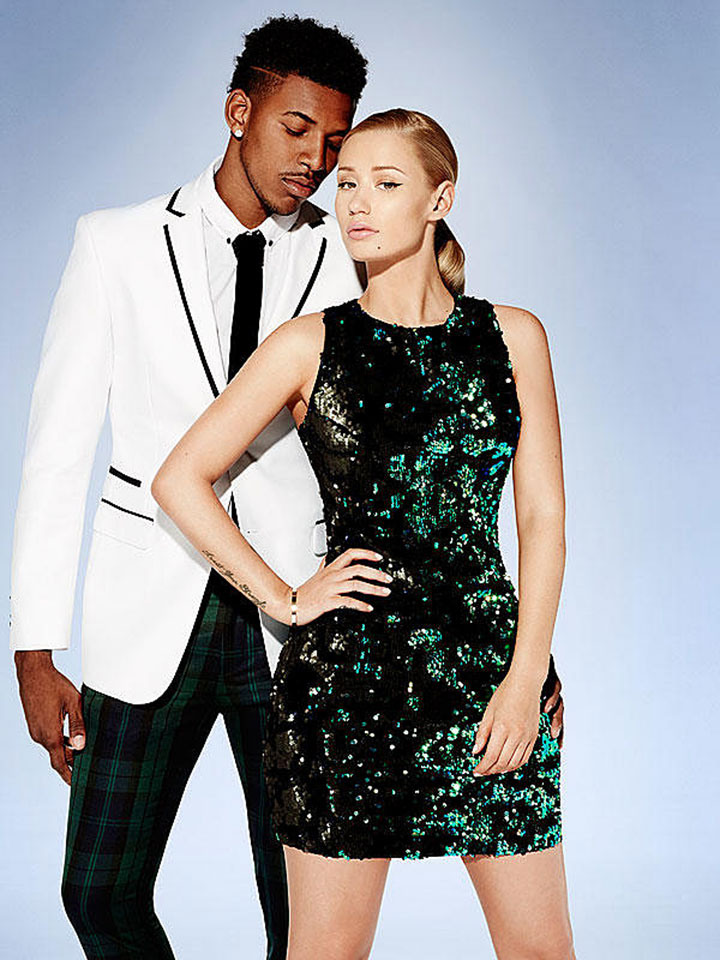 It’s beautiful, right? It’s like watching a painting or a poem come to life. Also, his 360 here feels necessary; it was just a thing that had to happen so he could make a layup so his team could have two more points so it could have a slightly better chance of winning that game, which would improve its place in the standings. That’s not what a Swaggy P 360 layup feels like, and really, I’m very sad that nobody is calling this a Swaggy P60 yet.

This is so perfect. The announcer describes it by saying, “Seven-point deficit … here’s Young … he attacks … twiiiirls!” and then laughs when the ball hits near the top corner of the backboard. That’s perfect, too. This gets a “Swaggy x Swaggy” ranking. You might maybe want to knock it down a bit because he missed the layup, but, sir or ma’am, let me assure you the point of a Swaggy P60 isn’t to make the Swaggy P60, it’s to do the Swaggy P60, because by doing the Swaggy P60 you’ve already made it in the greater sense of the phrase.

9. The time Swaggy P said that God gave him the nickname “Swaggy P.”

I don’t know a lot about church, but I know that in the times I’ve been, the pastor never said anything about how God didn’t give Swaggy P his nickname. Proof enough for me.

This is my all-time favorite Swaggy P moment. Most pointed out the things he said in relation to Azalea, and that’s mildly funny, but not really. That’s a thing a lot of guys have said and will say about their women. What is really amazing is when the reporter asks him at the end of the clip how he feels about people calling for D’Antoni’s job, who was still coaching the Lakers at the time. Young processes the question, then, in the slickest (and likely slightly drunkest) way possible, he hums back, “Damn, that’s a … it’s a shame what happened to D’Antoni.”

1. He said “happened.” D’Antoni didn’t resign until about two weeks after this video was filmed, but Swaggy P still used “happened” because Swaggy P only exists in certainties and inevitabilities. (That’s how we ended up with the most famous Swaggy P video.)

2. Even better, though, is the way he adjusted his words after he’d started talking to make it seem a lot like he was referencing the scene in Above the Rim in which Tupac says, “It’s a goddamn shame what happened to Flip.”

In the clip, Avon Barksdale asks Tupac, “What about Flip?” He’s referencing an earlier altercation when Flip, a bum played by Bernie Mac, stood up to Tupac. When Tupac says, “It’s a goddamn shame what happened to Flip,” he’s implying that Flip is going to die, and that’s what happens later in the movie when Tupac attacks him and kills him with a razor blade. Flip wasn’t dead before Tupac said his line, and neither was D’Antoni. We all knew what was coming, but still, it hadn’t happened yet. So Swaggy P bundled it up with “It’s a shame what happened to D’Antoni,” at once making a prediction and pop culture reference that aligned himself alongside Tupac, which is just — how does anyone live to be that smart and amazing??? 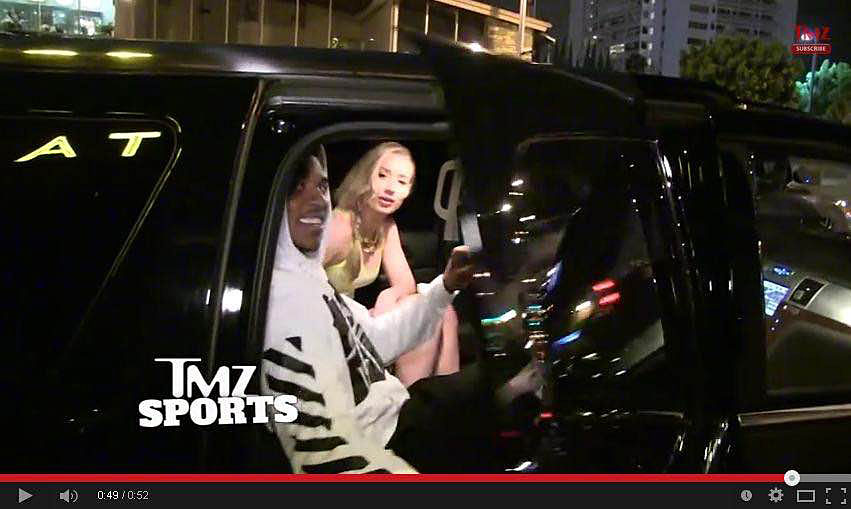 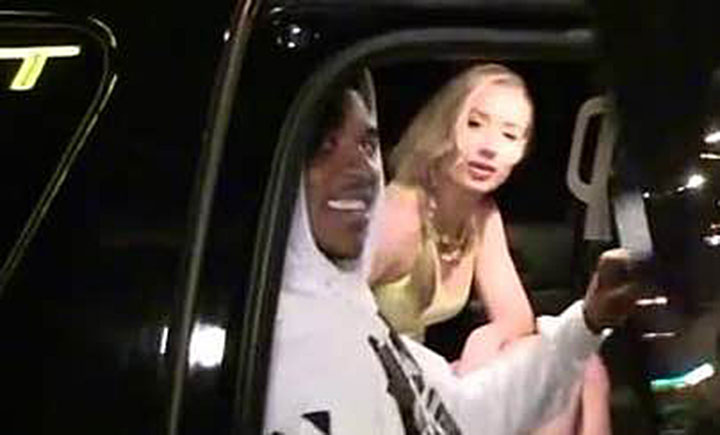 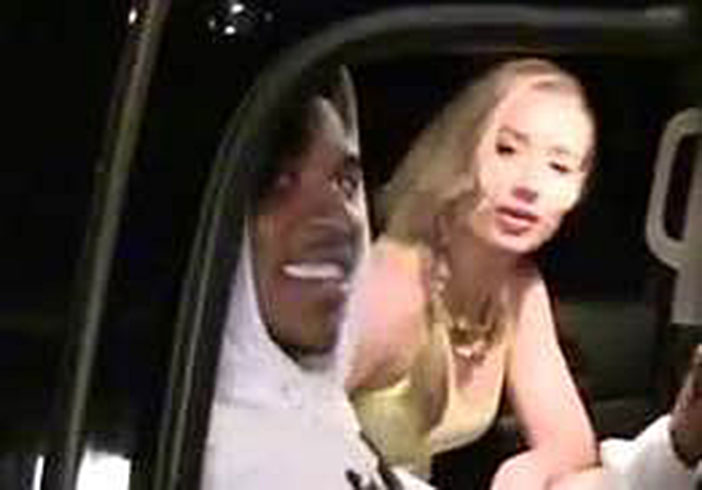 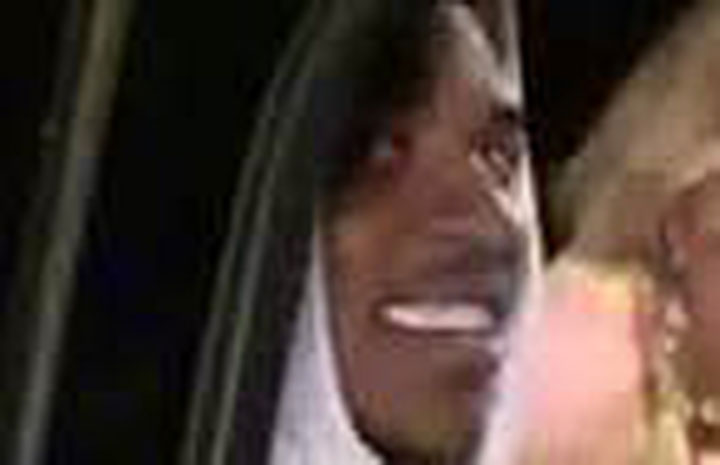