Scott Skiles Was the Least of the Milwaukee Bucks’ Problems 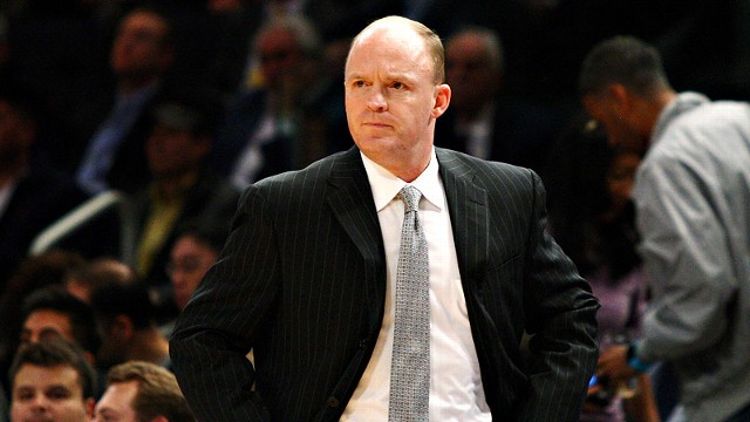 We’ll always have the second half of the 2009-10 season. That’s when the Bucks, under head coach Scott Skiles, became League Pass darlings in a way they never were before and haven’t approached since. The Bucks went 18-6 after swiping John Salmons from the Bulls at the trade deadline, and before Andrew Bogut’s season came to a scary and sad end in early April with a gruesome bad-luck fall on his right arm. Bogut had been playing the best ball of his career, scoring in high volumes from the post, getting to the line more, dishing assists out of the pick-and-roll, and playing the best individual defense that existed anywhere outside of Orlando.

Salmons went on a tear that would earn him a $40 million contract the Bucks have since pawned off on the hapless Kings (though Salmons, it should be said, has been a steadying presence in Sacramento this season). A delightful, fearless grasshopper of a rookie point guard in Brandon Jennings helped run what used to be Michael Redd’s show, and the Bucks for two months were legitimately terrifying. When Salmons, Bogut, and Jennings shared the floor, Milwaukee scored at a top-10 level, defended better than any team in the league — by a giant margin, per NBA.com — and scared the bejesus out of fans whose higher-seeded teams were potentially in line to draw Milwaukee in the first round. Fear the Deer was a real thing. It was perhaps Skiles’s crowning moment as a coach, though he had already transformed teams in Phoenix and Chicago into defensive powerhouses before wearing out his welcome in both towns.

Then Bogut got hurt on a now-forgotten semi-dirty shove from Amar’e Stoudemire, and Milwaukee has basically been floundering ever since. All of that resulted in the deal that sent Bogut (and Stephen Jackson’s monster contract) to Golden State in exchange for Monta Ellis and Ekpe Udoh, a trade that essentially sealed this team into mediocrity and left Skiles sullen enough to leave the job for good late Monday night. (The team was likely going to be mediocre anyway, since Bogut has played 73 minutes so far this season, and his is a contract that could run one year longer than Ellis’s.) Jim Boylan, Milwaukee’s top assistant and a former assistant to Skiles in Chicago, will take over the team tonight, and odds are he keeps the job the rest of the season. At 16-16, Milwaukee has a better-than-50-percent chance of making the playoffs for the first time since that 2010 season, though those odds will drop a bit if Andrew Bynum steps on the floor anytime soon.

Skiles is a grouchy perfectionist who will yank guys after a couple of defensive mistakes, and his cranky management of Milwaukee’s rotation over the years — and especially this year — is the sort that leaves agents and players grumbling. Samuel Dalembert, acquired for cheaper spare parts in a deal that ate into Milwaukee’s potential cap room, opened the season as the team’s starting center — its missing link since Bogut’s myriad injury issues — but barely plays now. Ersan Ilyasova fell to the fringes of the rotation after signing a big-money deal in the offseason and struggling badly at the start of the year. Hey, there’s John Henson again! Wait … where’d Marquis Daniels go after randomly starting all those games and getting hot for a week or so? Tobias Harris can’t get any run, in part because he can’t shoot (and Mike Dunleavy Jr. can), and in part because Skiles won’t grant Harris the leeway for defensive errors he has granted Ellis and Jennings.

Players are human, and they enjoy consistency. That isn’t always possible within a competitive roster, but Skiles this season has been unusually haphazard in divvying up playing time. That probably reflected his pessimistic attitude toward this roster, and it certainly didn’t help morale.

Skiles is pigeonholed as a conservative defense-first type, and while he prizes tough defense above all else, he has proven a smart tactician capable of adapting to wildly different rosters. When the Bucks replaced an elite big-man defender with an undersize chucker who could run the pick-and-roll, Skiles retooled his offense into a fast-paced, assist-happy fun-time machine. Milwaukee ran when it could, and within the half-court, Skiles scrapped the post game and predictable pick-and-rolls (up high for Jennings, and on the wing for Salmons back in 2010) in favor a whirling circular system of high-speed dribble hand-offs that turned into impromptu pick-and-rolls at the elbow area. Jennings and Ellis would sprint down one side, turn and run the baseline, pop up for a handoff near the opposite elbow, and grab the ball at full running speed. From there, they could either penetrate the lane, pitch to their partner at the top in a similar action, or (gulp) launch a difficult mid-range jumper. The system didn’t always lead to efficient shots — no Ellis-dominated system could — but it worked as an antidote to en vogue defensive systems designed to force all pick-and-rolls away from the middle. By getting Ellis and Jennings the ball at high speed, and while running the center of the court, Milwaukee could manufacture the kind of penetration defenses were trying to deny.

Skiles also incorporated some funky actions for Ilyasova and a lot of very creative sets designed to spring Dunleavy, a plus/minus god so far in Milwaukee, and one of the best bang-for-the-buck free-agent signings of the past three summers. Milwaukee regularly piled up 30-plus assists in the second half of last season, but the team’s defense, its calling card for so long, collapsed after the Bogut deal. Skiles has them playing top-10 defense again this season, thanks to the emergence of LARRY SANDERS! and the return of Luc Richard Mbah a Moute, but the offense has fallen to pieces. Ilyasova bricked everything through the team’s first 15 games, and there isn’t a single low-post or pick-and-roll threat among Milwaukee’s pile of bigs beyond Ilyasova. And, most of all, the Jennings-Ellis pairing just hasn’t worked.

It’s fitting that on Skiles’s final day as head coach, both guards are shooting exactly 40 percent while gunning away at high volumes. Ellis has insisted on taking about 3.5 3-pointers per game despite shooting just over 25 percent from long range. Jennings’s ability to finish at the rim has taken a step back after his percentage from in-close ticked up last season, and he still ranks toward the bottom of the starting point guard pile in terms of driving into the teeth of the defense and creating productive looks for teammates. Ellis is better at that, and efficiency nerds — present company included — have historically underrated Ellis’s ability to get to the stripe and find teammates for open looks at the rim. But Ellis has never balanced his decision-making properly, and Milwaukee has been worse overall for two straight years when this duo shares the court, per NBA.com. These guys are an offense-first pair, but Milwaukee’s offense hasn’t even improved by a single point per 100 possessions when Skiles rolls with the Ellis-Jennings duo.

Basically: This is a .500 team, and they’re playing .500 ball. There’s not much else Boylan, Skiles, or Red Auerbach could do with these guys. Skiles could have managed his rotation in a more sensible way, and perhaps given a bit more run to lineups that bring a better mix of offense and defense. Perhaps more patience with Ilyasova early would have paid dividends sooner by enabling those sorts of balanced lineups, but Ilyasova was so bad — and so timid — it’s hard to quibble in hindsight.

The same is true for the way John Hammond, Milwaukee’s GM and a free agent himself this offseason, has constructed this roster. It’s easy to reverse-engineer Milwaukee’s roster moves and suggest Hammond either should have bottomed out, trading Bogut for pennies on the dollar, or scraped together serious cap room by passing on above-average guys such as Salmons (traded for Jackson, who then went out the door with Bogut), Ilyasova and Dalembert, and a big-money journeyman in Drew Gooden. But bottoming out in a small market with a substandard arena is difficult, and requires owner approval, and top-level free agents aren’t clamoring to soak up Milwaukee’s cap room anyway. The single biggest factor governing Milwaukee’s last half-decade or so of existence was Bogut — both winning the draft lottery in a year in which the consensus no. 1 guy was a B+ instead of an A+, and then losing that guy to a catastrophic injury when he was finally reaching his two-way potential. (Note: Deron Williams and Chris Paul were selected at no. 3 and no. 4 in Bogut’s draft, but few were clamoring for Milwaukee to select one of them.)

That doesn’t totally absolve Hammond. There are always alternative paths — deals unmade or unpursued, decisions made too late. But sussing out the alternative path that would have Milwaukee challenging the Heat right now is pretty hard. Such is reality in a non-glamour market — you need tons of luck to reach the Oklahoma City/San Antonio level.

The big decisions come this summer, when Jennings will hit restricted free agency and Ellis can opt out of his $11 million deal for 2013-14 and enter unrestricted free agency. If there’s a time to bottom out, perhaps this is it. Executives around the league are divided on what Ellis will do, but he’s only 27, and the history of guys facing his choice suggests the smart move is probably to opt out and secure a long-term deal carrying an annual salary close to what he earns now. Jennings is only 23, with bigger potential, and Hammond has indicated he will match whatever offer Jennings might get on the open market this summer.

And that’s dangerous. Jennings’s game has essentially stalled out. He’s a 40 percent shooter with a 3-point stroke that tops out as average and mediocre driving/passing skills. He can be a disruptive defender, but he’s loose with his fundamentals, and unlike Jrue Holiday (his draft mate, and new owner of an extension worth up to $46 million), he cannot credibly defend shooting guards. Barring some change over the next 45 games or so, the Bucks should not be in a rush to give Jennings $12 million per season.

Regardless: If Ellis opts out and the Bucks renounce his rights, Milwaukee could have max-level cap room, even including Jennings’s cap hold. (They could have more if they use the amnesty provision on Gooden, but that has always been unlikely in Milwaukee, especially since Gooden’s deal runs through 2014-15.) Power forward is probably the most plentiful position among top-level guys set to hit the market in July, and the Bucks are all stocked up there — for now. But Milwaukee could use that space to re-sign Jennings and dot the roster with shooters and role players.

Or they could do something more dramatic. Are Milwaukee fans ready for that?

As for Skiles, he’ll surface somewhere, perhaps first as a lead assistant type before claiming a head job for some team in need of a defensive upgrade. And he’ll do well.