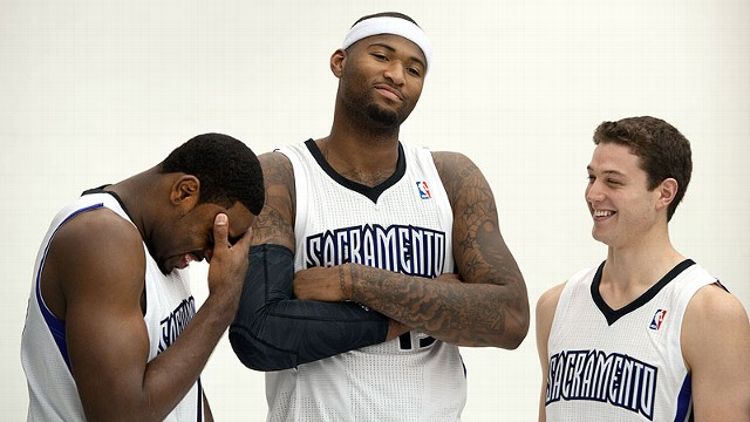 The Sacramento Kings may begin play as the Sonics 2.0 in Seattle as early as next season, though Sacramento — its mayor, Kevin Johnson, and the fans who supported the Kings when they were a team worth supporting — has not given up its years-long fight to keep the only pro team in town. But if the NBA wants the duplicitous, bumbling Maloofs to sell the team to a big-money group from Seattle, that is probably going to happen. The owners of the Kings would have to file relocation papers by March 1 if they want to begin play in Seattle next season. The trade deadline is February 21, setting up an awkward period in which teams wishing to deal with Sacramento may have to go through multiple and haphazard layers of approval to get a deal moving.

New ownership, whether it’s formally in place or in de facto control of the team, will want a say in any big decision — whether to trade DeMarcus Cousins, add long-term contracts, or cut as much salary as possible.

Executives around the league agree the Kings are at least open for business right now — taking calls, engaging in exploratory talks, etc. There’s some wariness that the ownership transition, should it actually start soon, would complicate things, but there remains optimism the Kings won’t just disconnect the phones regardless. (Note: They might do that if the Maloofs can no longer afford the phone bill before the sale is final.)

They are also pretty much unanimous that Cousins, despite his three suspensions just this season and occasionally toxic personality, is off-limits right now, barring a blow-your-mind offer that isn’t coming — and can’t really come, anyway, since Cousins makes only $3.88 million this season. Teams over the cap wishing to take in Cousins’s salary would have to send out a similar amount, and a salary at that level on its own will not bring a fair talent return for Sacramento. It’s possible for Sacramento to add another player to a Cousins package to beef up the outgoing salary, but going that route entails either taking on considerable long-term money, dumping everything for a big expiring contract, or building a three- or four-team deal to send some of that salary elsewhere — all things that require ownership input.

The issue is moot, anyway, if the Kings are determined to keep Cousins, and everyone agrees they are — for now.

And that’s understandable. Cousins is a versatile 22-year-old big guy with a long-ish wingspan and a bullying post game that already requires a double-team and should develop into an efficient weapon as he matures. But there are serious reasons to worry about Cousins’s development, and they go beyond his attitude. I’m not a Cousins skeptic or doubter yet, but he should have shown us more by now. This is a center who has never shot better than 45 percent in a season, normally an inexcusable level of inaccuracy for a big man who takes so many of his shots near the rim. (Note: He’s also taking a career-high 5.6 long 2-point jumpers per 40 minutes while making just 29 percent of them; he’s shot an acceptable percentage on those shots in his prior two seasons, but even a hit rate in the high 30s on such attempts basically amounts to sabotaging a team’s offense if someone takes them in high volumes.)

Cousins makes up for some of those misses by rebounding a higher-than-expected percentage of them and drawing a ton of fouls. He can work off the dribble and he’s a very skilled passer for his size, and we should see an uptick in efficiency — perhaps a dramatic one — once he finds the right balance of all these assets.

His defense is a deeper worry. The Kings are, once again, a miserable defensive team — 29th in points allowed per possession, showing absolutely no development or aptitude on that end. That’s not all on Cousins, obviously. Almost all of Sacramento’s guards are some combination of undersized or lacking in fundamentals. Aaron Brooks negotiates screens without a game plan, Isaiah Thomas is a flea by NBA standards, Jimmer Fredette is basically helpless, and Marcus Thornton is still too often in the wrong place at the wrong time. The Kings are the worst wing pick-and-roll defense team in the league, per Synergy Sports, and I’m honestly not sure I’ve ever seen a team struggle more to defend pick-and-rolls.

Every team tries to force those plays toward the baseline and away from the middle. The Kings use the same strategy; they just can’t execute it. Pulling this off requires both the guard and big man involved to get into position early — the guard blocking the ball handler from using the pick and going toward the foul line, the big sliding down toward the baseline, where he’s supposed to corral the point guard outside the paint.

The Kings just cannot manage this. Everyone is late or out of position, and the rotations behind the play are usually off.

Cousins is a part of this. The Kings have been worse with him on the court for two straight seasons, and allow a higher shooting percentage on attempts in the restricted area when he’s in the game, per NBA.com. He too often plays defense like a lazy or showboating boxer, arms at his sides, standing straight up, uninterested in expending a ton of energy. He reaches and swipes at ball handlers instead of sliding along with them. He’s also habitually lazy in transition from offense to defense, and not only because he enjoys arguing with referees when they don’t bail him out of a crazy post move. He just hasn’t bought into the idea of playing hard on defense consistently — or even very often — and it shows up blatantly on film.

And it’s a shame, because he has a motor, and a brain. It’s obvious when Cousins defends hard, because it stands out, and he can be effective all over the court during those stretches. There’s a reason he is among the league leaders in charges taken over the last two seasons, though some more rim protection would be nice. He also shows a good sense of opponent profiles — who can shoot, who can’t, and who can be left alone at various places on the floor.

And he’s only 22. Still: Big men who don’t defend and shoot 50 percent or less without a monster pick-and-roll game can only be so helpful. Does Cousins want to be helpful? Or does he want to be an Al Jefferson/Chris Kaman type, only with a few more foul shots and angry glares? I hope it’s the former, and so do his suitors.

Beyond Cousins, these are the Kings’ main assets:

The Kings could combine two of those assets in a deal for a big-salaried, big-name player, and as I wrote last Friday, it’s easy to build a workable Rudy Gay package around Evans, Garcia, and enough flotsam on both sides to get the Grizzlies under the tax line. This is probably why Memphis has at least approached the Kings of late, per the Sacramento Bee’s Ailene Voisin.

But Gay is set to earn a ton of money in 2013-14 and the following season, assuming he opts in for nearly $20 million in 2014-15, and he’s precisely the kind of giant long-term expense that would require a thoughtful “yes” from any prospective new owner — even if the Kings haven’t been able to figure out their small forward spot since Peja Stojakovic’s prime.

Evans will be a restricted free agent this summer, which makes dealing him even trickier. He’s bounced back a bit this season, but he’s dealing with left-knee issues and has shown little development since a promising rookie season. It’s very hard to find heavy minutes for wing players who can’t shoot if those players don’t bring some other crucial skill at an elite level — especially defense, like Tony Allen, or passing. Evans cannot shoot, at all, despite working his butt off during the offseason; Keith Smart raved to me over the summer about how Evans would be in the gym at all hours of the night launching jumpers.

The results haven’t shown up yet. He still fades away needlessly, and he’s shooting 29 percent on mid-range shots after shooting 30.8 percent last season, per NBA.com. Teams ignore him on the perimeter, killing Sacramento’s spacing. Such players need the ball to be effective, and Evans is a dynamic ball handler. But he’s not yet a dynamic passer. He probably leads the league in spin moves in traffic, a quirk Smart has told me stems from Evans’s tendency to drive with a score-first mentality — and without a backup plan, or (in Smart’s words) a “map” of the floor.

He showed some potential as an off-ball cutter last season once Smart installed Thomas as the lead ball handler, but Evans has taken only 11 shots via cuts so far this season, per Synergy Sports.

Basically: Evans might be headed for the O.J. Mayo restricted free-agency experience, where a glittery name carrying a stalled game finds a cool market and accepts a short-term deal at a cheap salary. And if teams think they can get Evans for $4 million or $5 million per season in July, why trade for him now? The Kings can obviously match any offer for Evans, and they’ve got only about $49 million in salary committed for next season, assuming they decline an option on Garcia. (That number does not include Evans’s cap hold, but it does include the salary slot for the no. 6 pick in the draft.)

Given this context and Evans’s salary, just below the league average, it’s hard to see what the return here would be — unless the Kings want to dump salary, or can find a lottery pick for Evans. Both are unlikely. The usual suspects — Boston, Denver, the Lakers — have kicked the tires on Evans, according to Voisin’s piece, but it’s hard to see what assets they have to really intrigue the Kings. The Lakers are an especially laughable candidate, even with a third team to help, since L.A. has traded a bundle of future first-round picks already and used its $3 million annual cash-in-trades allotment in the Steve Nash deal.

Thompson is clearly an attractive asset, and as I wrote last month, you can expect teams to ask about him. He’s a well-rounded big locked into an affordable long-term contract. He could start on a loaded team, but he’d be a perfect third big on most teams — a valuable commodity. It’s possible the Kings could snag a lottery-protected first-rounder for him in a deal that would reduce their long-term salary obligations and clear playing time for Thomas Robinson.

We’ll see. But the Kings, franchise drama aside, are still taking calls.