Typecasting — The Wunderkind: After seven games as Texas A&M’s starting quarterback, is it possible we know even less about him than we did heading into the opener? At that point, his potential was strictly hypothetical and distant. Hill came to A&M in 2013 as a four-star recruit on the heels of a wildly productive, high-profile prep career in Dallas,1 and boasted the same basic profile as his predecessor in College Station in terms of size (too short) and mobility (very high). But even the optimists who saw fit to draw explicit comparisons between Hill and Johnny Manziel were taking the long view: Hill, after all, was only a sophomore with a handful of garbage-time snaps under his belt against the dregs of last year’s schedule. He had so much time in front of him — three years, assuming he could continue to hold off ballyhooed true freshman backup Kyle Allen — to make the role his own.

After one game, however, any appeals to patience seemed absurd. In his first career start, Hill broke Manziel’s single-game school passing record in a 52-28 rout of South Carolina, and the hype machine began churning at full speed. By the following morning, Hill was a household name on the short list for the Heisman;2 within a week, his parents had filed for a trademark on the phrase “Kenny Trill.” In his out-of-the-blue Heisman campaign in 2012, Jonathan Football, Esq. didn’t really cement himself (or his considerably less-inspired nickname) in the national consciousness until the final month of the season. By contrast, by the end of September, Hill had passed for 1,745 yards and 17 touchdowns amid A&M’s 5-0 start, and figured prominently in every notable straw poll. The Aggies ranked sixth in the AP poll, matching their regular-season high under Manziel, and visions of a January playoff berth danced in their heads.

My own reaction column following that game intentionally avoided the word “Heisman,” but did evoke Manziel, Tim Tebow, Cam Newton, and Jameis Winston.

In October, the air has gone out of the Trill bubble before the Texas weather has turned. Two weeks ago, Hill threw three interceptions against Mississippi State (and also fumbled a ball that A&M recovered), and A&M trailed by as many as 31 points en route to an ugly, 48-31 defeat. On Saturday against Ole Miss, Hill was responsible for three giveaways — two of which were returned directly for Rebel touchdowns — in a 35-20 loss that left any remaining pretense of competing for an SEC title, playoff berth, or Heisman Trophy in shambles. In both games, Hill looked more like a rattled, erratic 19-year-old still feeling his way than a self-assured prodigy with his name in the record book and a nascent personal brand. In this weekend’s trip to no. 7 Alabama, he faces arguably his toughest test of the season and his last chance to salvage some of the unreserved hosannas that greeted his debut. Based on what we’ve seen so far, it’s equally plausible that he could emerge with his star intact, or with a fan campaign under way for his ouster in favor of the Next Big Thing.

At His Best: While the yardage record against the Gamecocks was nice, anyone who puts the ball in the air 60 times in one night is going to amass a lot of yards. (By comparison, Manziel averaged about 33 passes per game, and exceeded 44 only once.) What was really impressive about Hill’s debut was the efficiency: Seven of A&M’s first eight full possessions resulted in points, on drives covering 67, 75, 85, 75, 80, 66, and 42 yards.3 In two quarters, the Aggies racked up more points (31) and as many first downs (23) as South Carolina allowed to all but one opposing offense in 2013, with almost all of it coming courtesy of Hill’s right arm.

For good measure, the Aggies scored again on possession no. 10, a 10-play, 83-yard march in the fourth quarter; only decorum prevented them from tacking on another score on drive no. 11, a 17-play, 78-yard slog that drained the final 10:05 from the clock.

No individual play from that night stands out as singular evidence of Hill’s precocious brilliance — only two of his 44 completions covered more than 25 yards, with the longest going for 33 — but in reviewing them all, his grasp of the offense and general headiness under pressure becomes readily apparent. In context of his more recent struggles (see below), his ability to elude the initial pass rush, find an open receiver downfield, and make an accurate throw on the run is particularly noteworthy:

Hill has faced only one “clutch” situation so far, which saw A&M trailing Arkansas 28-14 entering the fourth quarter. From there, he connected on two long touchdown passes — covering 86 yards to Edward Pope and 59 yards to Josh Reynolds, respectively — to force overtime, then found Malcome Kennedy for the game winner on the first play of the extra session. The bomb to Pope traveled nearly 60 yards in the air, making it the best evidence yet of Hill’s above-average arm strength.

At His Worst: Hill is almost certainly going to break Manziel’s single-season records for passing yards and touchdowns, but those gonzo stats come with a lot of empty calories. For one, three of his seven starts to date have come in stat-padding efforts against nonconference tomato cans Lamar, Rice, and SMU. And although Hill has averaged a whopping 416 yards passing with 13 total touchdowns in four SEC games, much of that has stemmed from sheer volume: He’s also averaged 54 attempts in those games, for an OK but not amazing 7.7 yards per attempt. That’s great for a fantasy league; not so much for an efficiency rating.

More to the point, a huge percentage of Hill’s production the past two weeks has come in the fourth quarter of blowout losses, with the games already well out of hand. Mississippi State led 48-17 early in the fourth before allowing a couple of late touchdown passes to pull the final margin within 17 points; Ole Miss led 35-7 before yielding a pair of late scores (the second coming as time expired) that cut the final margin to 15 points. More than 200 of A&M’s 455 total yards on Saturday were tacked on after the Rebels stuck in the dagger at the start of the fourth with a 21-yard touchdown return of an unforced Hill fumble:

That was Ole Miss’s second defensive touchdown of the game, and the first was even more indicative of how far Hill seems to have regressed since opening night. Against South Carolina, he made quick decisions, kept his head under pressure, and found escape routes to buy time. Against Ole Miss, he held the ball too long, panicked under pressure, and let throws like this one flutter recklessly, with predictable results:

Granted, the sudden appearance of an angry Robert Nkemdiche in any human’s field of vision is bound to cause some involuntary, evolutionary panic. (Note that in the embedded play, Nkemdiche, a sophomore, went head-to-head against A&M’s touted left tackle, Cedric Ogbuehi, who’s widely considered a likely first-round pick in the 2015 draft.) But Hill also made poor decisions against the Rebels with a clean pocket, and made arguably his worst throw of the season against Mississippi State with a clear path in front of him to scramble for a first down. At other times, he’s simply been inaccurate on easy throws.

The mistakes aren’t all on the quarterback — A&M receivers were plagued by drops in Starkville, one of which resulted in the first of Hill’s three interceptions — but with Alabama, Auburn, Missouri, and LSU still to come, the margin for error isn’t about to get any more forgiving.

To Saturday and Beyond: Two years ago, Manziel made his name in Tuscaloosa in a 29-24 upset over no. 1 Alabama that vaulted him to the front of the Heisman chase and validated A&M as a formidable player in the cutthroat SEC West. While the 2014 Tide haven’t earned the invincible aura that surrounded the 2012 edition — which rebounded from the A&M loss to win the SEC and its second consecutive BCS championship — they still rank among the top defenses nationally in both yards and points allowed, as usual. If Hill still has any chance of rekindling the opening-day magic, it’ll come on Saturday.

Barring a sudden return to form this weekend, though, Hill is unlikely to have much of a national profile over the second half of the season: With A&M effectively eliminated from the SEC championship and playoff conversation, whatever success he has down the stretch will have to be paid forward toward preseason hype for 2015. Still, now that we’ve gotten a brief glimpse of Hill’s ceiling, the rest of his career will inevitably be measured against those heights. 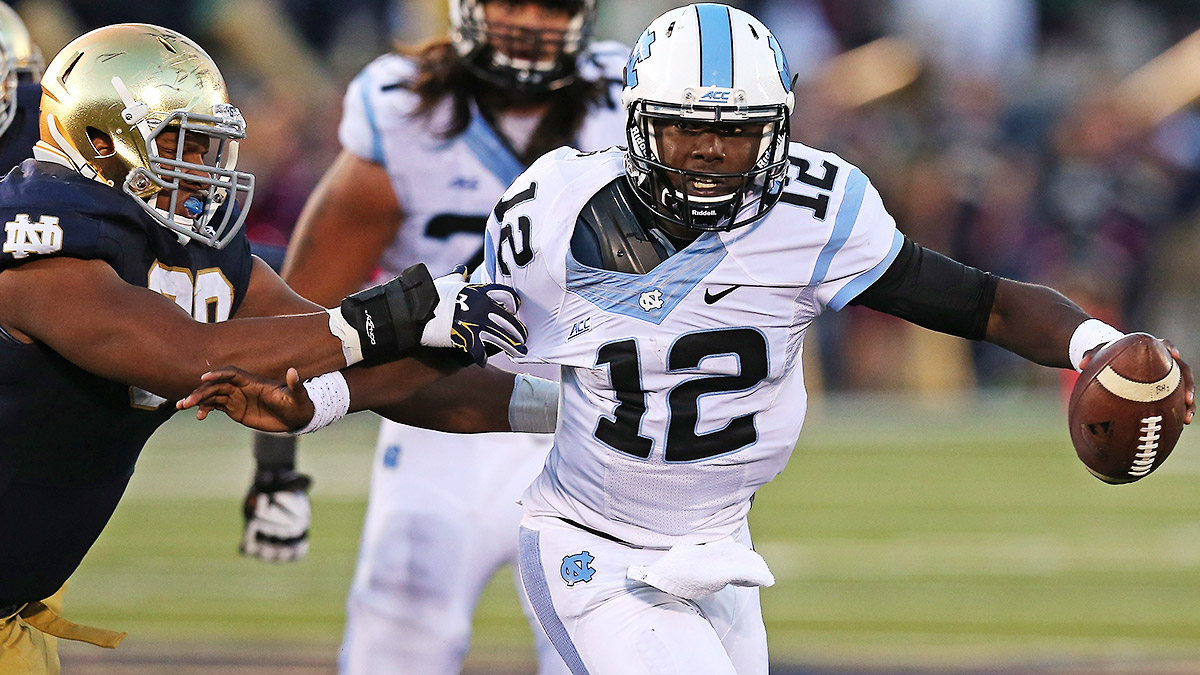 It’s a cliché that the quarterback takes too much blame when the team is losing, and amid North Carolina’s four-game skid, there’s plenty to go around. Despite their many other shortcomings, though, the Tar Heels got their money’s worth from Marquise Williams in Saturday’s wild, 50-43 loss at Notre Dame. The junior accounted for 435 yards of total offense (303 passing, 132 rushing) and four touchdowns in a losing effort, and added a 23-yard touchdown reception in the third quarter, which briefly pushed UNC in front, 36-35:

Williams has endured a rocky season, occasionally sharing snaps with redshirt freshman Mitch Trubisky; even in South Bend, where he stole the show, Williams committed a late interception that thwarted a critical scoring opportunity in the red zone. Still, the Tar Heels remain very much alive in the ACC’s wide-open Coastal Division (their next five games are against division rivals), and despite his inconsistency, Williams remains the best argument in favor of a potential run. 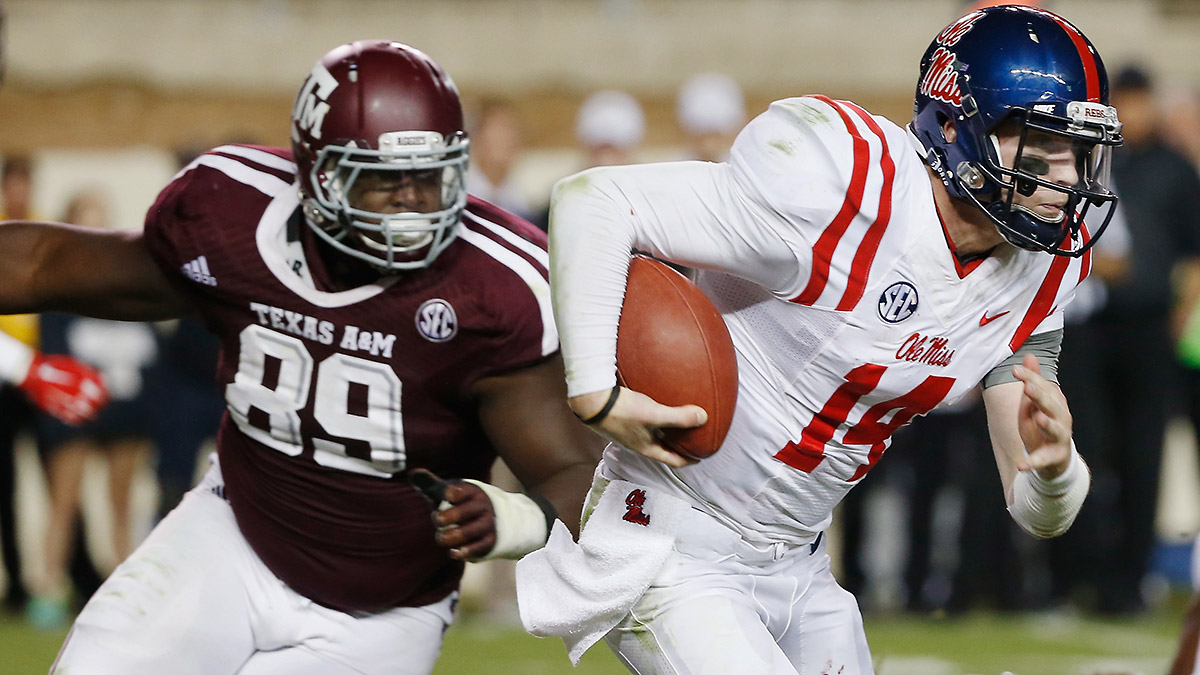 1. Marcus Mariota, Oregon. Mariota accounted for 285 yards and four touchdowns in a 42-30 win over UCLA, a refreshingly businesslike stat line compared with the much heavier burden he carried the previous two weeks. More important, given the chaotic state of Oregon’s offensive line: He wasn’t sacked. (Last week: 1)

2. Dak Prescott, Mississippi State. You know you’re good when your two interceptions go down as mere footnotes on the same weekend you become the face of the no. 1 team in the nation. (LW: 2)

3. Jameis Winston, Florida State. Football seems to be the last thing anyone wants to talk about regarding the reigning Heisman winner — understandably so — but this weekend’s blockbuster visit from Notre Dame is another chance for Winston to remind everyone (particularly NFL scouts) that he’s still very, very good at football. (LW: 3)

5. Bo Wallace, Ole Miss. I get the feeling Rebels fans who’ve watched Wallace for the past two years are still waiting for the other shoe to drop, but “Bad Bo” seems to have left the building: Wallace has yet to throw an interception in three SEC games and ranks sixth nationally in pass efficiency. (LW: 8)

6. Everett Golson, Notre Dame. Golson continues to offset bad plays (three turnovers versus North Carolina) with good ones (three touchdown passes versus the Heels), but the scales need to tip heavily in favor of the latter in Tallahassee. (LW: 10)

8. Brett Hundley, UCLA. Hundley continues to look better on paper than in person, boasting the nation’s best completion percentage and fourth-best efficiency rating against FBS opponents. As with Hill against Ole Miss, though, most of Hundley’s production in UCLA’s loss to Oregon came long after the game had been decided. (LW: 7)

9. Blake Sims, Alabama. Much of the blame for Bama’s offensive lull has fallen on the backup center Bradley Bozeman, who’s filled in the last two weeks for injured starter Ryan Kelly. But is the center really to blame for Amari Cooper catching only two passes for 22 yards against Arkansas? (LW: 9)