We’re already 15 percent done, but the Premier League table remains a mess of uncertainty. After six games, half the league sits between seven and nine points. With everybody so tightly bunched, a lot can change in a hurry, and next’s week table is bound to look a lot different than today’s.

But for now, let’s focus on, well, the now. Among the top six, the two Manchester clubs and Arsenal are expected, but as for the likelihood of West Ham (third), Leicester City (fourth), and Everton (sixth) occupying such lofty positions? Not so much. Whether it’s the Hammers rudely welcoming Petr Cech to Arsenal, Riyad Mahrez’s blazing start, or Steven Naismith inflicting an off-the-bench hat trick on Jose Mourinho, the trio of upstarts have made their way up the table thanks to a number of compelling attacking performances.

So, we have to ask: With Chelsea still in the process of un-breaking themselves, Liverpool supposedly on the verge of dismissing their manager, and Tottenham being Tottenham, could any of these teams — like Southampton did last year — stick around the top of the table come the spring? For all three, defense is the key. 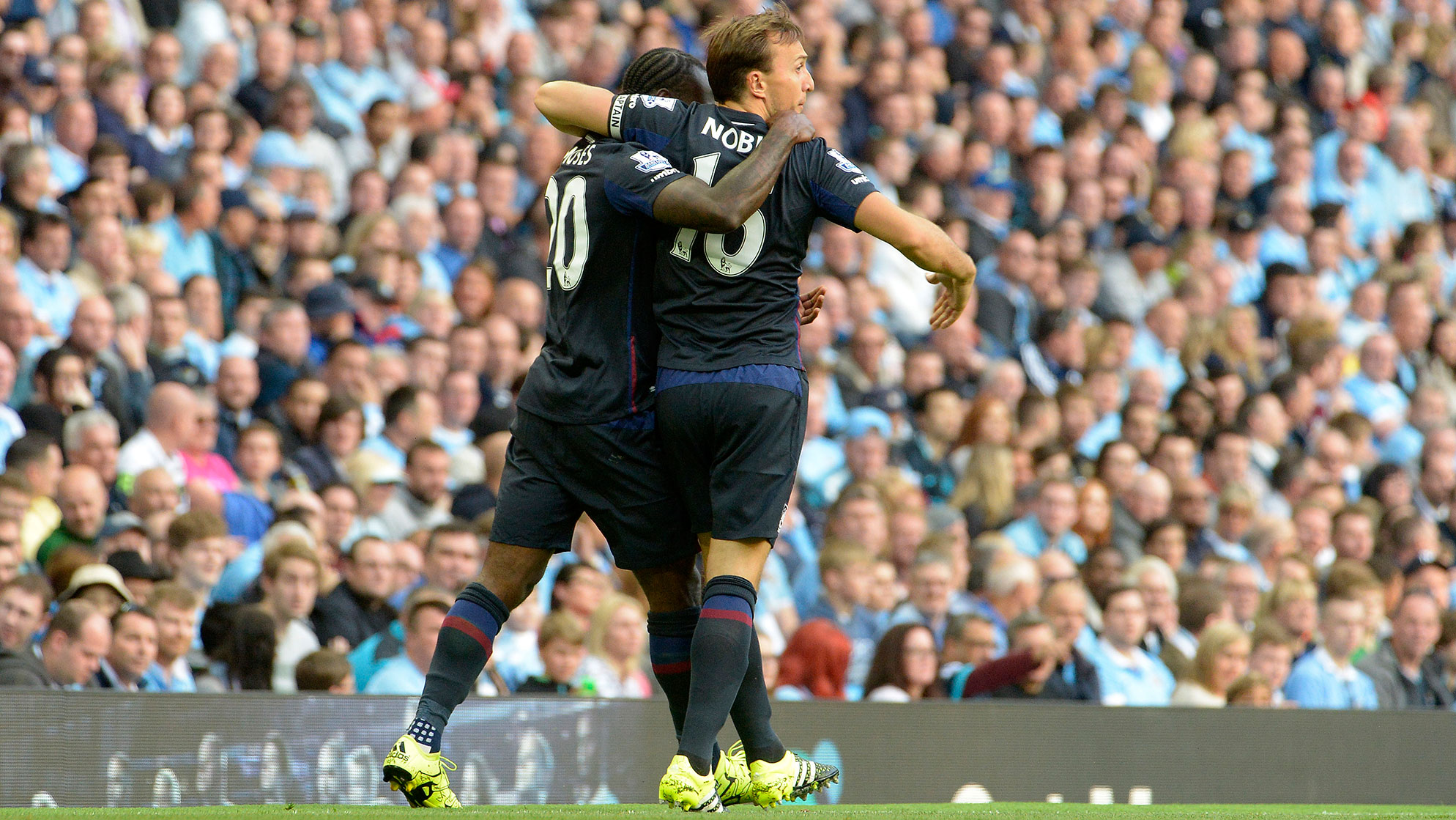 It’s not even October, and West Ham already have three iconic victories. They’ve gone to the Etihad, the Emirates, and Anfield and walked away with nine points.

Now for the bad news: Those signature wins are almost certainly not a sign of things to come. Against Manchester City and Liverpool, the Hammers scored with their first shot of the game. Against Arsenal, it was with their first shot on target. And in all three matches, their second shot on target resulted in a second goal. So unless the English FA passed a secret law requiring any team hosting Slaven Bilic’s side to play with a hologram instead of a human keeper, West Ham will eventually have some of their early shots saved.

They’ve been lucky on the defensive end, too. After grabbing a two-goal lead within 31 minutes against City, West Ham managed to fend off an incredible attacking barrage. They faced 27 shots and conceded a whopping 3.69 expected goals — yet only gave up one actual goal.1 Some of that comes down to relentless defending and some fantastic goalkeeping from Adrian, but if you consistently give up that many chances, you’re bound to start giving up more goals from better finishing, unlucky deflections, or both.

All stats via ESPN Stats & Info.

Even more concerning than the performance against City, though, is how porous West Ham’s defense was in their losses to Bournemouth and Leicester. In each game, they conceded more than two expected goals. Overall, they’re conceding 1.77 expected goals per game, the second-worst rate in the league.

If West Ham’s poor defensive numbers were due to them stealing early goals against good teams and then holding on for wins, the high expected-goals totals could be explained away. But given that their problems have extended to lesser opponents at home, the issue seems to be that they can’t attack without leaving themselves extremely vulnerable. West Ham’s first shot is going to stop finding the back of the net at some point, and they’re not a very good team when it doesn’t.

Leicester City is the last undefeated team in the Premier League. Take a minute to bask in the ridiculousness of that statement …

OK, back with me?

It’s tempting to look at this as a giant fluke, given that (1) they are Leicester City, and (2) they’ve had to come from behind in their last four matches, including multi-goal second-half rallies in their last two. Over that stretch, they’ve rescued six points from losing positions. That won’t keep happening — but maybe not for the reasons we’d initially expect.

Leicester have, perhaps, been slightly unfortunate to find themselves in those trailing positions to begin with. While Mahrez and the attack have been garnering all the attention, Leicester’s underlying defensive numbers are, surprisingly, pretty good. Last year, they conceded the fifth-most shots in the Premier League and the fourth-most expected goals; with mostly the same personnel this season, they rank sixth- and eighth-best in those categories. Those aren’t necessarily Champions League–chasing numbers, but they’re solid enough for a move up the table.

However, the biggest reason to be skeptical of Leicester is their schedule. They’ve achieved great results on the back of some pretty good numbers, except it all came against a group of opponents that includes three of the bottom five teams in the league (Sunderland, Stoke City, and Aston Villa), a newly promoted side in Bournemouth, the league’s biggest overachiever in West Ham, and Tottenham, who might actually be pretty good but still remain a long shot for Champions League contention. Leicester have a chance to inherit the “Southampton Memorial Little Engine That Could” crown for this season, but they’ll need to keep playing as well as they have, and they’ll need to do it against much better competition. 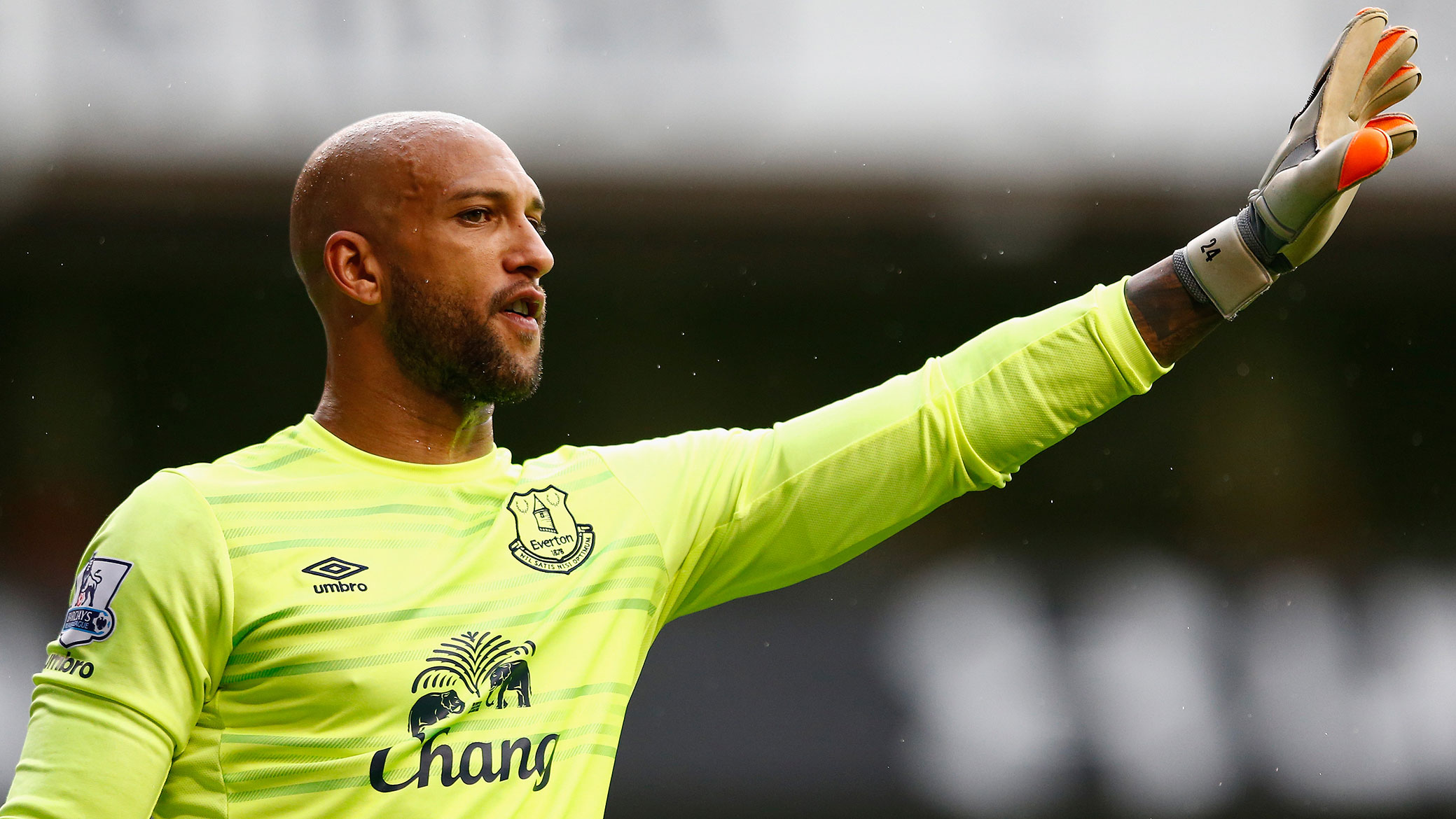 Five teams currently have nine points, so Everton are only here because they’re sporting the best goal differential among that group. If you want to be skeptical of Roberto Martinez’s team, take a look at last year, when a very similar team only managed to collect 47 points and finished in 11th. If you want to be optimistic, take a look at two years ago, when a very similar team managed to finish fifth and was in contention for fourth until the last few weeks of the season.

If the team is essentially the same, then what’s changed? The defensive performance. Two years ago, Everton’s defense not only limited expected goals — conceding 47.40, the sixth-fewest — but it was backstopped by an incredible season from Tim Howard. The American keeper conceded 12 fewer goals than expected goals would have predicted.2 Last year, the defense got worse with 50.47 expected goals against (the eighth-fewest), and Howard returned to earth, with him and backup Joel Robles conceding only 2.47 fewer goals than expected. Relying on a hot keeper — rather than, you know, a defense — is no way to create stability.

Calculated by comparing how many goals a keeper conceded to the expected goals of the shots on target he faced.

This year, Everton have already begun riding its luck on defense. They’ve only conceded five goals, tied for the third-fewest in the Premier League. And they’re only giving up expected goals at a rate of 1.17 per 90 minutes, roughly their 1.14 rate from two years ago, and slightly better than their rate of 1.23 last season. Yet, Howard is also already 2.5 goals better than his expected total — the fifth-best mark among keepers. Despite their hot start, Everton’s defense still looks like a unit that’s going to need Howard to replicate his Belgium performance … 32 more times.