NHL Weekend: He Shoots, He Scores 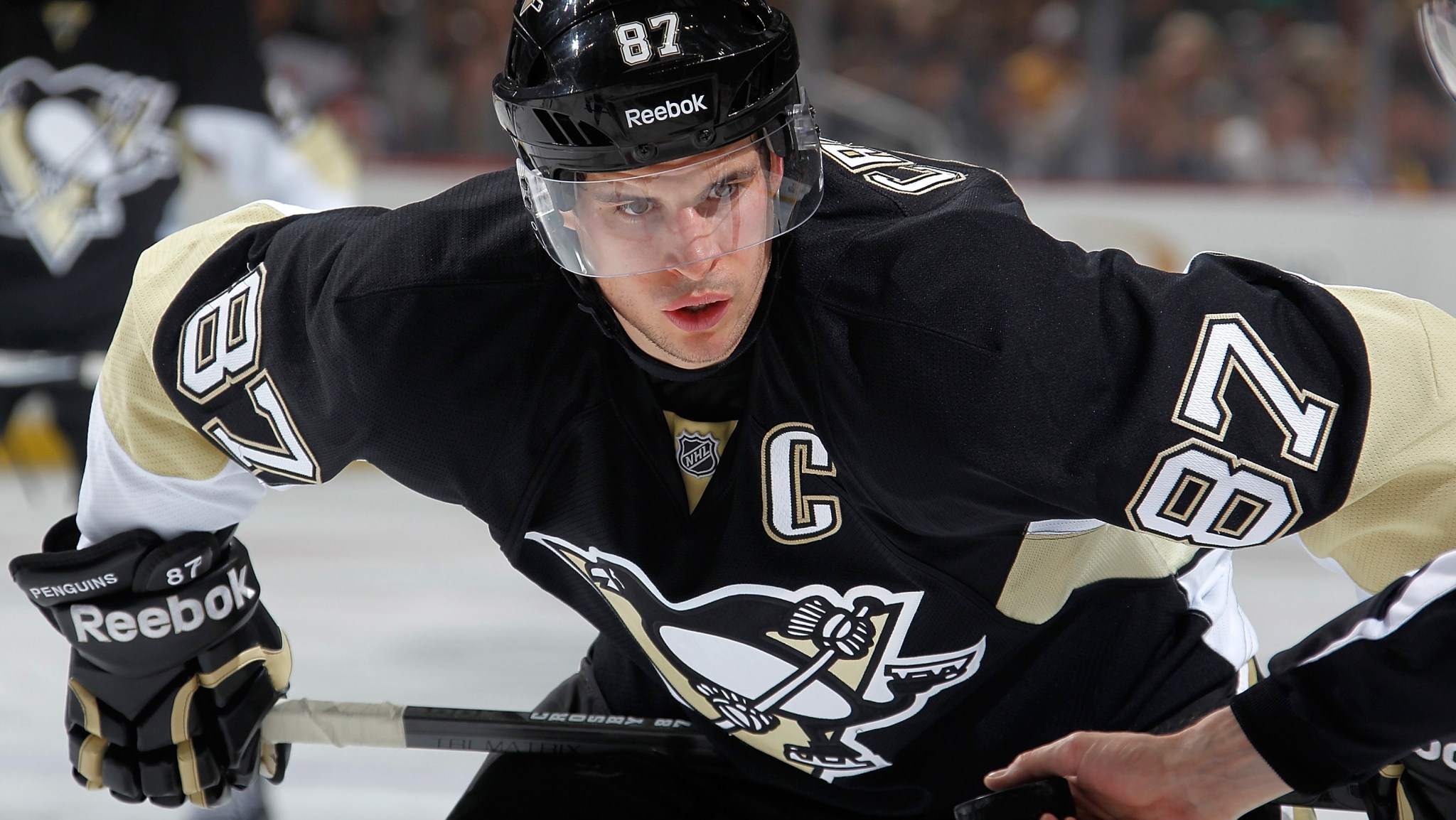 Sidney Crosby recorded five assists on Saturday in Buffalo, a performance that moved him back into a familiar spot on top of the league’s scoring chart. Crosby won last year’s Art Ross, and this year he leads the race even though only one NHL team has played fewer games than the Penguins’ 13. If he stays healthy, it’s hard to see anyone catching him.

The rest of the top 10 is, to put it politely, an eclectic mix. Jakub Voracek and Patric Hornqvist are solid enough players, but I doubt either one is causing Crosby to lose sleep. The same could be said for youngsters Tyler Johnson, Tyler Toffoli, and Vladimir Tarasenko, although the latter might have a chance if the league starts awarding bonus style points for goals like this and this.

Claude Giroux seems more like the type of guy who could have a shot, although he’s already facing a deficit of six points. Phil Kessel or Tyler Seguin are both five back, and will probably stay tied all year because North American law dictates that we can never mention one without bringing up the other.

And then there’s the lone defenseman in the group, who doubles as the only blueliner in the league’s top 20: Calgary’s Mark Giordano, who’s racked up 18 points through 16 games. He has no shot of catching Crosby — no defenseman other than Bobby Orr has ever won the Art Ross, and Giordano’s career best is 47 points. But while he won’t challenge for top spot, his offense could earn him a different trophy. Giordano is a defensive stud and possession monster who was already on the outside of this year’s Norris conversation. If he can keep scoring at a decent clip all year, that could be enough to put him over the top with voters.

1. Vancouver Canucks (11-5-0, plus-5) Last night’s win over the Ducks was impressive, and they get bonus marks for posting a zero in the annoying OTL column. They’re probably just keeping this spot warm for the surging Bruins, but they’ve earned it for a week.

2. St. Louis Blues (9-4-1, plus-7) Their seven-game win streak was snapped on Saturday by the Predators, who moved past them into first place in the Central. In theory, that means I should have the Predators on this list somewhere. Maybe next week.

3. Tampa Bay Lightning (11-3-1, plus-17) They’ve won six straight, they’re tied for first place overall, and Steven Stamkos is on pace for 55 goals. Oh, and Norris-quality defenseman Victor Hedman has his cast off and is skating again. This week brings a pair of tough Western tests in Chicago and San Jose.

5. Pittsburgh Penguins (10-2-1, plus-28) They don’t earn extra credit for blowing out the Sabres on Saturday, but their double-digit league lead in goals differential is hard to ignore.

Our top three teams stay the same this week (although not in the same order), but last week’s fourth and fifth teams dropped off the list. Those would be the Canadiens and the Wild, who met on Saturday. The Habs took that one 4-1, handing the Wild their third-straight loss. Minnesota has scored only two goals over those three games, demonstrating once again that shooting percentage regression comes for us all. They’re still posting strong possession numbers and so should be OK in the long run, but at this point even a short losing streak is enough to drop a team out of the Central’s tight playoff picture.

Meanwhile, the Habs have won two straight and remain tied for second in the East with 21 points. Despite that, it’s hard to consider them an elite team. After back-to-back spankings by the Flames and Blackhawks earlier in the week, they needed a shootout just to beat the Sabres on Wednesday, and they’re still the only team among the East’s top 10 to sport a negative goals differential. At this point, the best thing you can say about the Canadiens is that they’ve done a good job banking lots of points despite not playing as well as they’d like to think they could.

5. Florida Panthers (4-4-4, minus-10) They can’t score, with their meager 20 goals ranking last in the league among teams that are actually trying. That’s been overshadowing a very solid season from Roberto Luongo, whose .947 even-strength save percentage ties for fifth among goalies with at least 10 games played.

4. Edmonton Oilers (6-8-1, minus-14) They snapped a four-game losing streak with a pair of weekend wins. Also, I’ve completely given up on trying to figure them out. They’re either playing well or they’re completely terrible, and I’m just going to leave them here and move on as quickly as possible.

3. Columbus Blue Jackets (4-9-1, minus-15) I hate to do this, because the Jackets have had some awfully tough luck with injuries early on. But after seeing them get lit up for seven by the Lightning on Saturday, they have to be on our list, and you could even make a case for them to drop down one more spot.

1. Buffalo Sabres (3-11-2, minus-34) They found themselves facing an early-season must-lose game against the Oilers on Friday. Despite jumping out to a 2-1 third-period lead, the Sabres managed to pull themselves together in time to lose in regulation. That’s the sort of clutch performance that’s going to make them awfully hard to knock out of the no. 1 spot.

It ends up being an Eastern Conference–heavy list this week, but several Western teams made a case. The Avalanche always seem to be hovering right on the perimeter, and Saturday’s loss to the Flyers moved the Patrick Roy Meltdown Meter into the danger zone. They spend the next two weeks playing NPMTs — that’s Non-Penguin Metro Teams for those who need a refresher — and that stretch is starting to get a distinct “make or break” feel to it.

And then we’ve got the Stars and Coyotes, both of whom are sitting under .500. The Coyotes had a three-game winning streak snapped in a 1-0 loss to the Islanders on Saturday, while the Stars have lost seven straight and are basically in a free fall. The two teams face each other tomorrow night in Arizona; that game will basically serve as a play-in to next week’s list.

• Sunday’s big game was a showdown between Western Conference powerhouses who aren’t playing like powerhouses. The Blackhawks jumped out to an early 3-0 lead and went on to beat the Sharks 5-2. The Hawks currently sit just ninth in the West, but their plus-13 goals differential is the best in the conference.

• The injury-plagued Kings played a man short on Saturday after they found out they didn’t have enough cap space to call up a player. The total amount they fell short: a measly $160. They still smoked the Canucks, 5-1.

• Last night’s Ducks-Canucks game marked the first chance for Ryan Kesler to face his former team. The Anaheim center played well, but was upstaged by one of the players he was traded for when Vancouver’s Nick Bonino scored the shootout winner. Kesler had a chance to tie it with the Ducks’ final shot, but hit the post.

• The Montreal Canadiens retired Guy Lapointe’s no. 5 on Saturday, more than 30 years after the defenseman played his final game. Lapointe is the 18th Canadien to receive the honor, the most in the league.

• The Flyers will be without Luke Schenn for two weeks after the defenseman was knocked into the boards from behind by Colorado’s Nathan MacKinnon. The play earned MacKinnon a five-minute major, but the league won’t take any further action.

• Don’t look now, but the Bruins have won four straight and are creeping back into the Atlantic Division hunt. And they’re doing it without Zdeno Chara, who’s still out with an injury. Boston being Boston, of course, that’s led to headlines like this.

• Hey, remember how New Jersey was going to be this year’s sleeper team because Martin Brodeur had secretly been the problem all along? After Friday’s loss to the Red Wings, the Devils have dropped three in a row, and their 45 goals are the 13th best in the East. Cory Schneider was pulled for the second straight game.

• Finally, the Rangers dropped a weekend pair to the Leafs and Oilers and now sit all the way back in sixth in the Metro. How do they feel about that? Not great, according to assistant coach Ulf Samuelsson. Maybe it was a low blow to say that losing badly to Edmonton was “embarrassing,” but it didn’t result in anyone shredding their ACL, so I guess we can call that progress.