The approach that earned the Cowboys a top-five offense this year just wasn’t going to work against Detroit. Dallas built its attack around a top-shelf offensive line and a punishing running game, while a magnificent year from Tony Romo filled in the rest. But even if Dallas hadn’t fallen behind early yesterday, it was going to need more than DeMarco Murray to get past the Lions.

Detroit’s run defense this year wasn’t just the best in football, it was one of the best ever. Some stats: The Lions’ run-defense DVOA was the fourth-best in the history of the stat. They gave up 3.17 yards per carry, comfortably the best mark in football. And they allowed 530 yards before contact on the season; that was 252 yards better than anyone else. The point: Running on the Lions was nearly impossible this year, and even the Cowboys were going to have a long day.

They did, as Murray put up just 75 yards on 19 carries. And for most of the contest, the Cowboys passing game wasn’t working either. Dallas struggled to move the ball because it struggled to keep Romo alive. A combination of a great game plan and a ton of talent up front for Detroit made the Cowboys offensive line look downright pedestrian en route to six sacks. Running for his life, Romo was a step below the quarterback he was for most of the season. More than one throw skipped off the turf a few yards in front of a waiting receiver.

With the typically dominant parts of its offense struggling, Dallas got its boost from players who had spent much of the year on the margins. On his first touchdown, Terrance Williams outran the entire Lions secondary. Cole Beasley did his own work after the catch. And while Jason Witten may be headed to the Hall of Fame, he has slowed down at 32 — except you wouldn’t have been able to tell yesterday.

Considering the decade-long connection between Witten and Romo, it’s no surprise Witten hauled in the pass on fourth-and-6 that helped decide the Cowboys’ season. Dez Bryant had his obligatory superhuman play, sure, but Dallas’s usual background players were the ones in the foreground Sunday.

Aside from T.Y. Hilton, Andrew Luck’s situation in Indianapolis is essentially the opposite of Romo’s. The Colts don’t have a running game to help prop him up, and injuries have pushed the Indy offensive line back into the depths of the previous few seasons. In theory, the way to attack the Bengals is on the ground, but by now the Colts understand how this works. They have Andrew Luck, and on some days, that’s going to be enough.

Luck let it fly 44 times Sunday and had his way with a reasonably stout pass defense. The Bengals’ nonexistent pass rush meant plenty of time for Luck to search for the downfield shots he loves,1 even if he had to sometimes settle for dump-off throws to keep the chains moving.

Only the Buccaneers (89) threw more passes at least 20 yards downfield than the Colts (88) this year.

Luck being really good isn’t a new concept, but the difference between him and the other seven quarterbacks left in the playoffs is how good he has to be in order for his team to have a chance to win. No other remaining playoff team relies more on its quarterback than the Colts, and with a stingy Denver defense next on the docket, that isn’t going to change anytime soon.

Earlier this season, when the Panthers were down to Jonathan Stewart and not much else at running back, Stewart joked about how strange it was for him to be the one playing while his teammates watched practice from stationary bikes on the sideline. For the past couple of years, it seems like every leg injury imaginable has kept Stewart off the field for Carolina.

That’s a shame, because when Stewart has been on the field, he’s been pretty damn good. It’s not a coincidence that Carolina’s late-season run coincided with Stewart being handed the bulk of the carries. He’s a massive, explosive running back, and it’s easy to see why he was taken 13th overall in the 2008 draft, ahead of guys like Chris Johnson and Rashard Mendenhall.

Stewart’s 123 yards came against a Cardinals run defense that has fallen apart as of late, and with an awaiting Seattle defense that’s been a terror against the run, those yards will now be harder to come by. But whatever happens next weekend, it was great watching Stewart, who’s been through injury after injury, finally have that type of playoff moment.

When teams sift through Teryl Austin’s head-coach résumé over the next few weeks, they should start with the film from yesterday. In his first season as a defensive coordinator, it’s been hard to find anyone better. Most of the year, the Lions were content to rush the passer with their excellent front four and not much else.2 But against Dallas, Austin’s approach was to bring every look imaginable.

They finished the season 27th in blitz rate, sending five or more on just 23.8 percent of dropbacks.

Detroit’s defense was a nonstop array of twists, fake blitzes, and real blitzes, all of which was enough to sack Romo six times and put him on the ground six more. For a lot of reasons — picked-up flags and otherwise — that wasn’t quite enough, but yesterday was a worthy final measure to the masterpiece Austin has put together all year. The 49ers, Bills, and Falcons have reportedly come calling already, according to the Detroit Free Press, and it likely won’t stop there. Austin helped take the Lions from a middle-of-the-pack defense to one of the best in football, and he did it without Nick Fairley, the team’s best non-Suh lineman, for the entire second half of the season. Don’t expect to see Austin in Detroit colors come next year’s playoffs.

The last time the Ravens were tasked with slowing down the Pittsburgh offense, Ben Roethlisberger finished with six touchdowns, Antonio Brown went for all the yards, and it was starting to look like the Ravens secondary might drag down an otherwise excellent defense. Well, not if the other seven guys have anything to say about it.

It helped that the Steelers were without Le’Veon Bell, but it’s hard to believe he would have made the crucial difference. Baltimore’s win was fueled by a resounding performance from its front seven. Elvis Dumervil continued what’s been the best season of his career, adding two more sacks to the 17 he had in the regular season, while Haloti Ngata was virtually unblockable in his first game back since being suspended.

With a secondary forced to start players like Rashaan Melvin, who was on the Dolphins practice squad two months ago, this is how the Ravens need to win defensively. They made the Steelers offensive line, which has been more than competent this year, look like its 2012 self all over again. Baltimore has built a deep, versatile front end of its defense, and if the Ravens have any hope of slowing down Tom Brady, it comes from this group being better than the one the Patriots have trying to stop them.

There’s no need to belabor points that have already been made, but it’s impossible to talk about what happened this weekend without mentioning the picked-up flag in Dallas. Games between two good teams often ultimately hinge on one or two deciding calls, but what happened yesterday is different. If a flag has ever been picked up and waved off that late after being thrown, I haven’t seen it. Although it’s possible Dez Bryant is just really persuasive, that’s probably not the answer, either.

That we’re even having a conversation about unfamiliar officiating crews working the playoffs together is reason enough to consider changing how playoff crews are constructed. Every game involves blind spots that require officials to communicate and piece together a call that no one official can see clearly enough. That’s tougher to do when the individual officials don’t know how the others work. 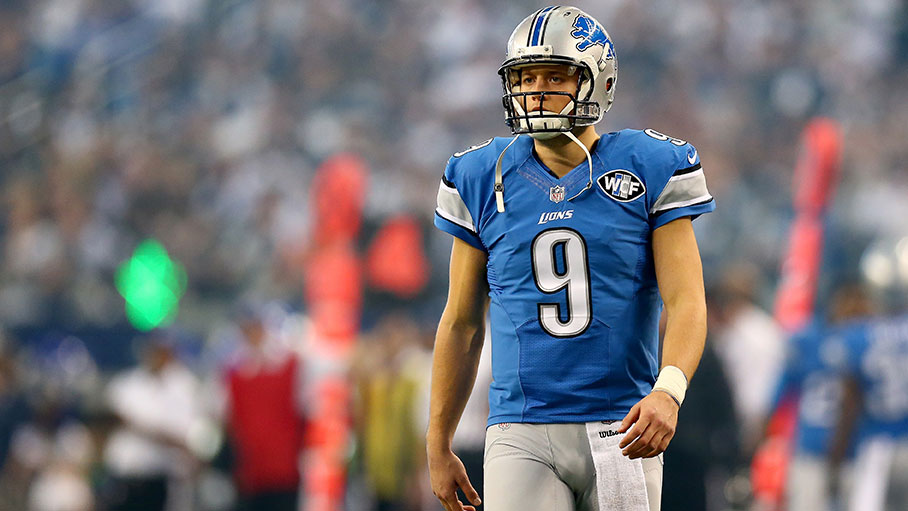 If that flag had stayed on the ground — and really, if only a handful of plays had gone just a bit differently — today would involve a lot of Matthew Stafford love. It’s been a typical year for Stafford: He has turned the ball over fewer times, but his play has been about as uneven as it usually is. He was better than that yesterday, though. On several occasions, the Lions needed a big play on third down, and Stafford gave it to them. It’s hard to make a better throw than the one Stafford stuck in between the corner and the safety to Calvin Johnson in the second half.

The Lions’ offensive ceiling with Stafford is clearly defined, but any mention of his winless record on the road against above-.500 teams isn’t fair after yesterday. He played well enough for the Lions to win, and as it always is, the line between that and the alternative is too thin to place on one guy.

Everyone on the Cardinals Defense

It was clear pretty early on Saturday that the Cardinals were playing in one of those games where their best chance of scoring would come when they didn’t have the ball. Whether it was the muffed punt or either of Antonio Cromartie’s near-pick-sixes, Arizona needed to put the ball in the end zone on plays it normally shouldn’t be able to.

“Excruciating” is the first word that comes to mind in describing Arizona’s offense against Carolina. Ryan Lindley somehow finished with a 6.1 QBR, which, if anything, means we might need to do some tweaking to the QBR formula. It’s hard to be as bad as he was Saturday, and what’s more terrifying is that the Cardinals clearly thought Logan Thomas would be even worse. The Cardinals reached a point of quarterback desperation that had people clamoring for Drew Stanton. That’s impressive.

The sequence of Rashad Johnson returning a fumble inside the Panthers’ 10 only for Lindley to throw the ball to Luke Kuechly on the very next play was one of the more depressing two-play stretches I’ve ever seen. Todd Bowles, Calais Campbell, and everyone associated with the Arizona defense did more than could be reasonably asked of them this year. They deserved to go out in a better way than this. 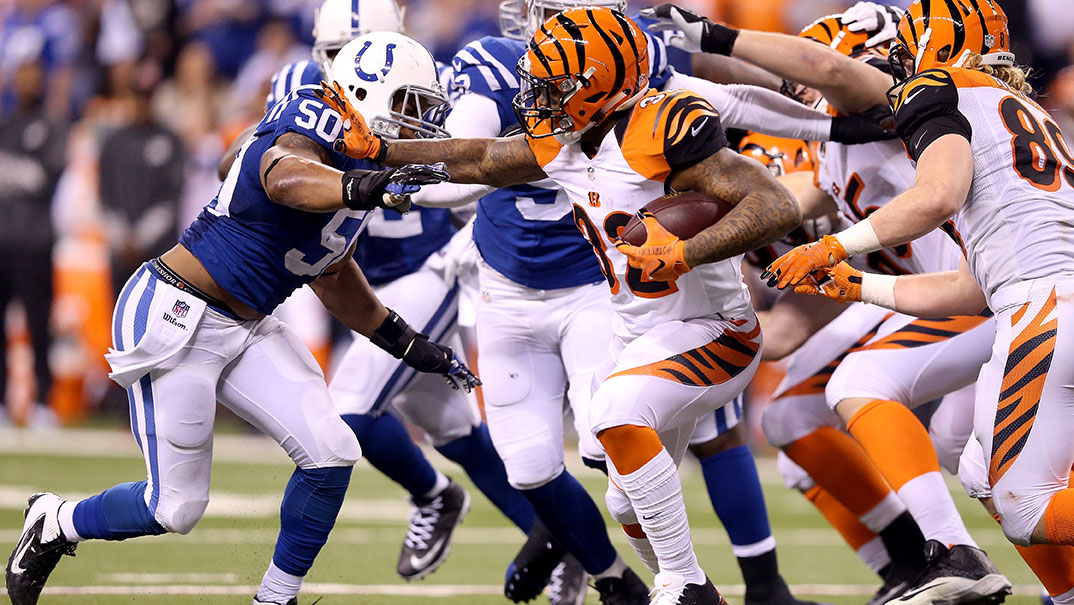 Cincinnati’s unwatchable second half wasn’t just about Andy Dalton. Yes, Dalton had another rough playoff outing yesterday, but it came without A.J. Green and against a good pass defense. The Bengals’ best hope against the Colts was to have a big day on the ground, keyed by Jeremy Hill, as has frequently been the case over the second half of the season. Instead, Cincinnati finished with 110 yards on the ground, and more than half of that came from a combination of Dalton and a gimmick play to Rex Burkhead early in the game.

Dalton needs to be better than his 4.4 yards per attempt yesterday, but for all the talk about wanting to be a ground-based offense this year, Cincinnati has too often been some combination of unwilling or unable to run the ball. It was more of the same yesterday, and although Dalton needs to give the Bengals more than he did, part of the problem is that they even put the game in his hands in the first place.