Their Own Personal Hell: Breaking Down the Devils’ Shootout Woes 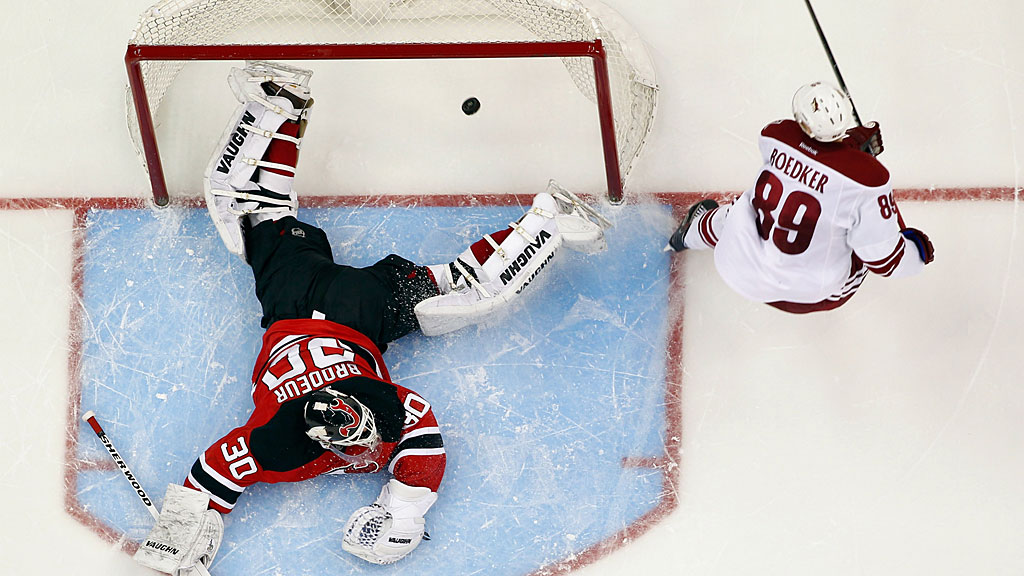 The New Jersey Devils’ line in the NHL standings may be the saddest thing in the hockey world.

They sit at 34-29-16, good for 84 points in 79 games, which leaves them three points behind Columbus for the final Eastern Conference playoff spot. Despite a late surge, time is running out, and the Devils will almost certainly fall just short of the playoffs.

But that’s not the sad part. Keep scanning the row of numbers and you hit one that has literally never been seen before: 0-11. It shows up in the shootout column, and it represents 11 consecutive losses in the NHL’s tiebreaking sideshow. If the Devils end up going winless in shootouts this season, it will be the worst performance in league history. Only one other team, the 2006-07 Hurricanes, went an entire season without winning a shootout, and they only lost five.

In the nine seasons the NHL has featured shootouts, we’ve come to learn they’re basically all luck, in the sense that teams that are especially good or bad at them one year are no more likely to repeat the status than anyone else. There’s individual skill involved, sure, but at the team level, we’re essentially flipping coins. Do you know how hard it is to have a coin come up tails 11 times in a row? Go ahead and try it; I’ll wait here until you give up.

If the Devils had managed to just be bad in the shootout — let’s say four wins and seven losses — they’d be in great shape right now. But the Devils are 0-for-11, and they’re probably going to miss the playoffs because of it.

And, as broken down in detail here, they’re doing it despite a roster full of players who’ve historically had decent shootout success. Yet in a league in which shooters typically convert on about one-third of their shootout chances, the Devils have somehow managed to go just 3-for-39. Their team shooting percentage in the shootout is significantly worse than their shooting percentage during the actual games, which, when you really think about it, should probably be impossible.

And it’s not like they’re some expansion-level roster full of cast-offs — they have the league’s active leading scorer and all-time winningest goaltender. But none of it matters.

It almost defies belief. So just to make sure this hasn’t all been a bad dream, I went back and rewatched every shot of every Devils shootout from this season. And since I don’t like to suffer alone, now I’m going to make you relive it all with me.

What Devils fans were thinking: Oh yay, a shootout, these are fun!

Highlights: The very first round gives you a hint as to how the rest of the year is going to go, as Brunner dekes past Evgeni Nabokov’s pokecheck attempt and then shoots it directly into his pad, followed by Brodeur stopping Frans Nielsen but appearing to hurt himself in the process. Clowe’s appearance briefly makes everyone wonder if they blacked out for 10 rounds. Pierre-Marc Bouchard tries Jason Allison’s patented “skate in slowly enough that the goalie might die of old age” move, but Brodeur stops him. Brodeur also stops John Tavares, then has to make a second save when the puck defies the laws of physics by trying to bounce directly into the net on the rebound because the hockey gods are sending a message.

New York’s Matt Moulson eventually wins it in Round 6, then vows to be traded at least twice before the Devils mange to win one of these.

How cruel was it in hindsight? Watching six guys fail to score couldn’t have been fun, though Brodeur looked sharp. Ah well. Get ’em next time, right?

What Devils fans were thinking: Oh yay, a shootout, these are fun (except for that last one).

Highlights: Brunner tries the Forsberg move, but puts it wide. Jordan Eberle and David Perron both beat Brodeur with essentially the same move, and this one is done after just two rounds.

How cruel was it in hindsight? Pretty cruel, since the Devils had blown a 3-0 lead in regulation. And also, it was a loss to the Edmonton Oilers. Probably more that second part, actually.

What Devils fans were thinking: Oh yay. A shootout. Wonderful. No really, I’m not being sarcastic.

Did anyone score? Of course not.

Highlights: This was the big Schneider vs. Roberto Luongo showdown, but you already get a sense the Devils are feeling the pressure as they unveil a new shooting lineup. It doesn’t help. Mike Santorelli opens things up by beating Schneider, and that’s all the Canucks need as the Devils spend the rest of the contest coming as close as possible without scoring. Zajac has the puck roll on him at the last second, Henrique dekes his way to an open net but hits the post, and Elias gets Luongo to look behind him before realizing he made the save.

How cruel was it in hindsight? This would have been a big win for Schneider personally, and all three Devils misses were flat-out painful.

What Devils fans were thinking: Yeah, these can stop happening any time now.

Did anyone score? Come on.

Highlights: Schneider stops Mason Raymond, who goes with the “skate in and just fall over” move, because, hey, it’s only the Devils. He also stops Phil Kessel, before giving up a goal to James van Riemsdyk. Meanwhile, Ryder is stopped, Zajac hits the post, and Henrique misses by three feet.

How cruel was it in hindsight? Would now be a good time to point out these first four all came against non-playoff teams?

What Devils fans were thinking: It’s been almost a month since our last shootout. I can’t remember, are we good at these?

Highlights: Boucher scores on a nifty deke, at which point the camera immediately shows everyone on the Devils bench smiling and laughing because the curse has finally been lifted. Montreal’s Lars Eller scores immediately, but at least everyone was happy for three seconds. Zajac misses, David Desharnais beats Schneider, and Elias can’t beat Peter Budaj, who kicks off a trend of the Devils losing to increasingly obscure goaltenders.

How cruel was it in hindsight? At least they scored a shootout goal. Baby steps.

What Devils fans were thinking: Santa promised me one shootout win for Christmas.

Did anyone score? Can the Devils make it two in a row? [Waits for suspense to build.] No. No they cannot.

Highlights: Jagr tries a slowdown deke move but then shoots it right into Curtis McElhinney’s pad. Don’t worry, we’ll see that one again soon. Clowe comes in wide and works his way back across the net, then can’t think of anything to do once he gets in there. Elias’s attempt has disappeared from the NHL website entirely, probably because of the nation’s anti-obscenity laws. Then Cam Atkinson slides one under Brodeur and everyone goes home.

How cruel was it in hindsight? Santa lied.

What Devils fans were thinking: Oh good, the Leafs again. There’s no way we can be more cursed than the Maple Leafs, right?

Did anyone score? Sigh. No.

Highlights: After van Riemsdyk scores, Jagr comes in slowly and then stops and dekes back and forth in front of Jonathan Bernier for so long that Bernier eventually pokes the puck off his stick just to put him out of his misery. There’s a weird unexplained pause before Tyler Bozak shoots in Round 3, during which everyone just stands around, presumably wondering what the point of continuing this charade could possibly be. Boucher’s magical run of successful attempts ends at “one,” which at this point basically makes him the Cal Ripken Jr. of Devils shootout streaks.

How cruel was it in hindsight? The Jagr move was fantastic. If it were up to him, I think he’d still be going.

What Devils fans were thinking: At least put Roy in net and make it interesting.

Did anyone score? Nope.

Highlights: Elias gets absolutely robbed by Semyon Varlamov and then skates off the ice making this face, which pretty much sums it up. Henrique misses the net, and Matt Duchene and Ryan O’Reilly both beat Schneider to seal it.

How cruel was it in hindsight? I’d say this was the tipping point from “this is weird” to “this is freaking ridiculous.”

What Devils fans were thinking: Oh good, it had been more than two months and I was actually starting to enjoy life again.

Did anyone score? Oh shut up.

Highlights: Brunner works a ridiculous move on Thomas Greiss, then has it poked off his stick at the last possible moment. Needing a goal to extend it, Elias goes to the same backhand deke move he’s been using pretty much all year, and gets the same result.

How cruel was it in hindsight? I’m starting to worry about Patrik Elias, you guys.

What Devils fans were thinking: Who even cares anymore.

Did anyone score? You’re just making fun of me now, aren’t you?

Highlights: This shootout featured the Islanders using shooters named Nielsen and Nelson and a goalie named Nilsson. I thought that was fun. Also, I think I saw Patrik “0-for-6” Elias try to swallow his own tongue before his attempt.

How cruel was it in hindsight? This was the 10th consecutive shootout loss, and I’m pretty sure most Devils fans had just moved to “acceptance” at this point. It would take something especially cruel to make an impact now. Speaking of which!

Did anyone score? Wait, we weren’t done with the shooters.

Did anyone score? Hold on, still going.

Did anyone score? You won’t believe this, but: twice! I’m dead serious, the Devils scored twice in the same shootout. (They still lost.)

Highlights: Tyler Ennis and Josefson trade goals to start us off. Four misses later, we’re into a fourth round, and Drew Stafford scores to put the Devils on the brink. But Jagr calmly swoops in to beat Sabres goalie Nathan Lieuwen, because, as we’ll come to realize in hindsight, he doesn’t feel like Devils fans have suffered enough.

We then get four consecutive rounds of Sabres failing to score, which means four consecutive rounds of Devils shooters having a chance to finally end the losing streak. Zajac hits the post. Ruutu puts one off Lieuwen’s blocker. Elias, who by this point is 0-for-7 on the year, fakes a slap shot from five feet out before sliding a harmless shot into Lieuwen’s pads. Henrique shoots wide on a deke, mainly because he has to stick handle around Elias, who is lying on the ice sobbing uncontrollably that he doesn’t want to do this anymore.

Finally, the Sabres turn to Ville Leino in what is presumably some sort of elaborate April Fools’ joke, and he beats Schneider 5-hole because of course he does. That leaves it all on the stick of Sislo, a rookie who had not been born yet when this shootout began, and he’s stopped on a deke attempt.

How cruel was it in hindsight? There’s a very good chance the New Jersey Devils are going to miss the playoffs because they lost a nine-round shootout to Ville Leino, Nathan Lieuwen, and the last-place overall Buffalo Sabres. Yeah, I’d say that was a little cruel.