Marshawn Lynch had just finished his daily press conference, and Howard Eskin’s face was the color of the stone formations at Red Rock State Park.

Eskin is a handsome, Hans Gruberesque guy who does TV and sports radio in Philadelphia. He had been — to use a phrase slung around the media rooms in Phoenix this week — just doing his job. Eskin squeezed his way past reporters and got close to Lynch. He asked a question. OK, it wasn’t a nice question. Or a question that was meant to solicit an answer.

“It’s not hard to answer a question …” Eskin told me after Wednesday’s presser. “What’s so hard to talk about what it means to be here the second straight year?”

And at the Super Bowl, no less. “The biggest game of the year!” Eskin continued. “He makes the NFL a charade. I hope they fine him for the hat, because they can’t fine him for the other things.”

After getting stiff-armed by Lynch, reporters first take an aggrieved, hard-line stance. Then, power dynamics being what they are, they begin to bargain. So we don’t need an Up Close interview. We’ll even eat a bit of Lynch’s disdain. “OK,” Eskin said, “you play this little game one day.” Eskin had been at Lynch’s press conference on Tuesday, shouting, “Why is it so hard to answer a question?”

Lynch didn’t answer that, either.

On Wednesday, Eskin tried to ply the sphinx with unconventional approaches. “Marshawn, could you get fined for not answering all the questions?” And: “Who set the time limit on how long you had to be here?” Lynch didn’t bother to stonewall on those — his policy was one “You know why I’m here” per customer. “I’m telling you,” Eskin said, “he didn’t answer every question, and I want to see the NFL come down on that.”

These kinds of contretemps aren’t new in sportswriting. Russell Westbrook just did a Lynch homage during a dispute with The Oklahoman. This season, the Chicago Bears press corps found that Brandon Marshall was giving much of his best stuff to Inside the NFL. So why have the Lynch Super Bowl press conferences become an existential crisis for sportswriting? What about Lynch’s actions is so offensive?

“I’m offended because we’re just trying to do our jobs,” Eskin said, “and he’s not allowing us to do our jobs.” Our jobs, Eskin explained, are to inform, to entertain, and also: “We’re out here to promote the product of the NFL.”

With that, Howard Eskin Beast Moded to the crux of the issue. He said what few media members are willing to admit: virtually every piece of sportswriting contains some amount of free advertising. Amounts may vary. We writers may try for good sentences, hardheadedness with the jock class, a solid foundation of stats like DVOA. But the commands embedded in our copy read the same: Watch the Super Bowl. Watch a whole week’s worth of press conferences. Drink in the drama.

In exchange for us pumping up the games, the NFL agrees to produce the players and conscripts them to talk to us. What offends us is that Lynch has backed out on the deal. He has turned us into PR agents waving blank press releases. You can take Lynch’s Wednesday catchphrase and, with a minimal shift of emphasis, put it in the mouth of the pissed-off sportswriter: “C’mon, Marshawn. You know why I’m here.”

There are only a few things in the NFL that are better in person than they are on TV. A Lynch press conference is one of them. About 10:30 Wednesday morning, a bunch of us reporters gathered around a small table in a resort hotel off Baseline Road. A placard bearing Lynch’s name had been placed on a table. Everyone leaned in for a better view. There was no hope of information or insight, but everyone wanted to be there for the theater.

Just then, an NFL official said, “Marshawn Lynch will be on the middle podium on the other side of the curtain.”

Jesus. We abandoned the table and ran into the next room. We surrounded a podium just as we had surrounded the table. I felt myself shoved forward so that my notebook rings were almost poking Eskin in the neck. The mob moved forward again, driving reporters into the NFL’s logo backdrop. “This is just insane,” somebody said.

Lynch appeared from stage left. If you want to hear Lynch say something other than a catchphrase, you have to listen to him before he gets on the podium. Here, he glanced at the wobbling backdrop and said, “It’s about to fall down, baby.”

Lynch got within steps of the podium and then stopped. Would he stiff the press altogether? Absorb what’s rumored to be a half-million-dollar fine?

Nope. “They said there’s some steps on the other side,” Lynch said. He took a leisurely turn around the circumference of the media throng and mounted the podium. He was wearing reflective sunglasses and two necklaces with Africa-shaped medallions. He laid down his phone and gave his now-familiar spiel about not talking to the press, no matter the question.

Some of the questions were poison darts.

“Are you here just so you won’t get fined?”

Other reporters tried to crack Lynch with friendly questions. “I asked him a couple of times about his charity foundation,” said Rob Maaddi of the Associated Press. “I thought maybe it’d maybe give him an opportunity. It’s a forum, right there … He said the same thing.”

The only time Lynch got off script, Maaddi said, was when “I asked him what pregame music he listened to. He said, ‘New song. Marshawn. You know why I’m here.’” Maaddi wasn’t sure that counted as an answer.

A reporter asked if Lynch had a message for the people of Brazil. Another asked Lynch if he preferred cat videos to dog videos, repeating the question Lynch obligingly answered in his new Skittles commercial. A reporter who was filming Lynch with her phone gave up and just began to wave at him.

But it took no more than two minutes of stonewalling for an unease to settle over the press horde. The theater wasn’t fun anymore. Patrick Finley of the Chicago Sun-Times squeezed his way out of the mob. “I’ve had enough of this,” he said evenly.

“I want to talk about why I’m here,” one reporter said. 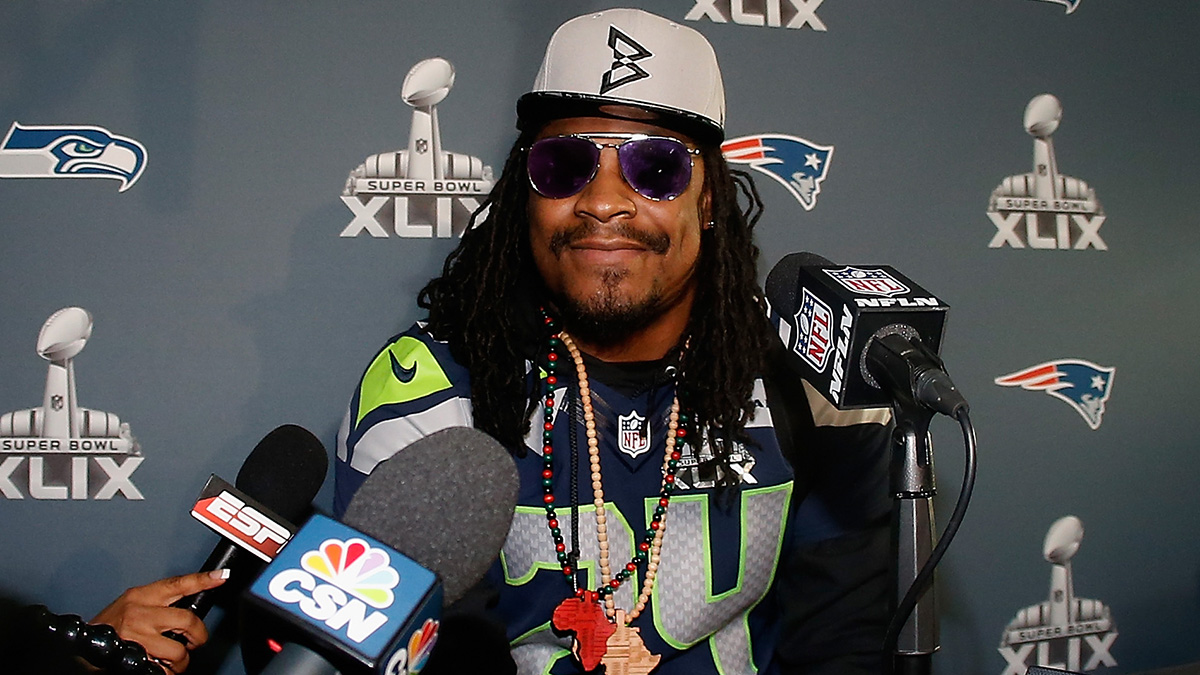 A related question is this: What do reporters want Lynch to do? Give the highlight reel of clichés about God being great, the Seahawks coming together as a team, and “giving us credit”? Part of the reason that Lynch’s behavior feels so strange, so wounding, is that other athletes produce such answers so easily. “Everybody’s done it whether they like it or not,” said The Tennessean’s Jim Wyatt, who was part of the Lynch scrum. “I just can’t understand why he’s chosen to not do it.”

It’s one thing to enjoy the theater, of course, and another to make Lynch into a Menckenesque press critic. He’s never spouted ideas like Richard Sherman, who pointed out that the NFL fines players for missing press conferences but doesn’t pay them to attend.

On the one hand, Lynch just doesn’t like the cameras. “I think that you’re seeing a demonstration of a guy being himself and not being what everybody wants him to be,” Pete Carroll explained. On the other, Lynch seems annoyed by the press’s coverage of his legal troubles (reckless driving, striking a pedestrian), none of which seemed outside the bounds of normal reporting. As we saw in 2014, the NFL can turn even crime into free advertising.

Indeed, Lynch’s press critique has the fuzziness of his teammate Doug Baldwin’s. After the Seahawks squeaked by the Packers in the NFC title game, Baldwin delivered an expletive-rich torching of reporters. I’m sure some writers reported Seattle’s 3-3 start this season as if ISIS had landed pirate ships in Gas Works Park. But the defending champs’ slow start was a news story. It was also free advertising.

That’s why the uncritical cheering of non-speaking athletes rings hollow. It depends on the athlete. I asked Baldwin what he’d learned about the media this season.

“Nothing, really,” he said.

I didn’t buy that, because by Tuesday, Baldwin had done to Deion Sanders what he’d once done to print reporters. That is, he’d made Sanders a stock character in his self-motivational exercises. He’d learned to use the press, quite effectively.

“I know you guys got a job to do,” Baldwin added. “That’s normal for us. We understand that. We won’t take it too harshly, too personally.”

That’s an olive branch Marshawn Lynch will never extend. Through his unending silence, Lynch is telling reporters: We aren’t business partners. Together we don’t make football.

Eskin, who has survived plenty of locker room battles, was open to getting along with Lynch. “They say the same things every day,” Eskin said of the players, “so if he would answer questions one day, we might not come back the second day.”

I put a hypothetical to Eskin. What if along with all the “You know why I’m heres,” Lynch gave us 10 seconds of A-plus cliché. Some usable “sound,” as they say in the TV trade. Could such a miserable portion make us forget what the Lynch press conferences reveal about our trade? Ten measly seconds?

“Make it 15 seconds,” Eskin said with a hearty laugh as he set off in search of a friendlier voice.