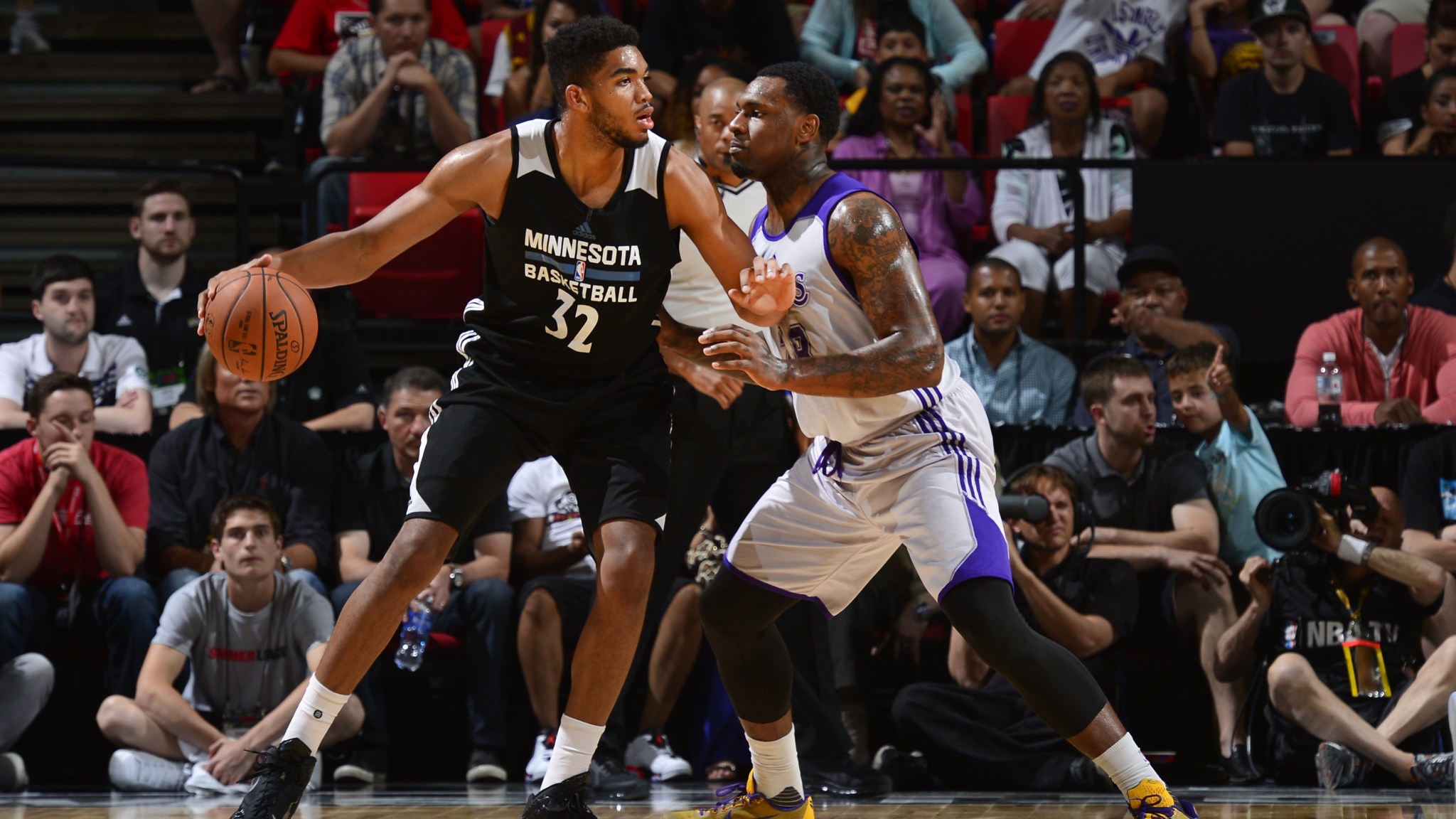 When he was in high school, he played in the shadow of Jahlil Okafor. In college, he was just one part of a Kentucky machine that was trying to go undefeated as coach John Calipari rotated players in hockey shifts. Before the draft, the basketball world was focused on DeMarcus Cousins trade rumors. For the past week at summer league, Kristaps Porzingis has been the cult hero, the mass of Lakers fans has made every D’Angelo Russell game feel like the NBA Finals, and Emmanuel Mudiay has been the star-in-the-making who’s had everyone buzzing.

So, at what point does no. 1 pick Karl-Anthony Towns become underrated?

I was watching the Wizards play the Suns on Saturday, and Alex Len was doing whatever he wanted against Washington’s band of cast-off veterans. Rebounds, putbacks, passes. Everything. Len would finish with 17 and eight, and it felt like he had most of that in the first half. I walked out in the second quarter and headed for Bulls-Wolves in the other gym.

I arrived right as Towns was destroying some helpless D-Leaguer’s layup. Then it was halftime, and I had to stay out of respect for that block alone. By the fourth quarter, I’d seen him make a few of the passes I’d heard people raving about. He opened the final quarter with an easy hook shot, then drained a face-up jumper. Towns didn’t have a good game — he finished 4-of-11 with nine points and nine rebounds — but it didn’t matter. I’d seen everything I needed to see.

Karl-Anthony Towns is going to be a monster in the NBA for the next 15 years. Reporters and fans may pay lip service to this idea, but we’ve been underselling it. Too many people talked about Towns like he was the “smart” pick for Minnesota, not the “holy shit, why would you ever take anyone else?” pick.

Everything clicked for me at that game, because I walked into the gym after watching Alex Len. For all the potential that Len has, he’s more like the centers we’ve been watching for the past 10 years. He’s awkward. He’s clunky. He’s not real strong. But he’s long, and if you’re looking for some scoring and rim protection, he’s plenty effective. Len will be good if he can stay healthy. Still, he’s one of maybe two dozen NBA big men who seem like they inherited 7-foot frames overnight and don’t know quite how to use them. Most of today’s centers have all the grace and poise of a guy wearing a suit that’s three sizes too big.

With Towns, everything fits. He moves like he’s been this size forever. We saw some of it at Kentucky, but in stripped-down summer league games you could really appreciate what we’re dealing with. Instead of straining to fit into a sport that’s now dominated by guys 6 inches shorter than him, Towns looks like a small-ball cheat code.

His shooting had been off until Wednesday night (when he went 7-of-9 for 20 points, 10 boards, and three blocks against the Blazers), and it’ll take time for him to blend face-up jumpers with post moves. And keep in mind that any time anyone says anything positive about the Wolves, you have to knock on wood and pray that Flip Saunders doesn’t ruin it somehow. But if you watch Towns, you see it.

This is what’s funny and a bit unfair about summer league — and basketball, and maybe life. You can watch Len, Marcus Smart, and Shabazz Napier dominate summer league. But then you see Towns make one play, and you realize those guys don’t have the same thing. That’s Towns. It’s unfair, but he’s just special. He’s quick enough to keep up with today’s game, but he’s big enough to remind you of the ’90s, and every few minutes he’ll make a jaw-dropping play look totally routine.

I don’t know exactly why big men stopped owning the NBA. It’s not just a stylistic thing. For whatever reason, the greatest athletes stopped being 7 feet tall and stronger than everybody. I grew up watching David Robinson, Hakeem Olajuwon, and Shaq. All of them were was as graceful as they were powerful, and they could take over games in 10 different ways. Since Tim Duncan and Kevin Garnett, we haven’t seen any real heirs to their throne. Today’s 7-footers look more like Dirk Nowitzki and Chris Bosh, or Kevin Durant, or some alien hybrid of all three (Anthony Davis). Other potential stars have been slowed by injuries (Greg Oden, Yao Ming), or attitude (Boogie), or everything (Darko).

“Where Killer Big Men Went Wrong” is a different piece, though. All I know is that any trip to Las Vegas is an exercise in sensory overload, and so is any trip to summer league. At the end of five days, everything is a blur, and the only thing I clearly remember is watching the rookie everyone’s forgotten to go crazy over.

I watched Karl-Anthony Towns defend, pass, turn in for easy hook shots, step into jumpers, and move like all of this is completely natural. At some point I started wondering, When was the last time we had an ass-kicking center who could just do everything?

Because it sure seems like that’s what’s coming in Minnesota.