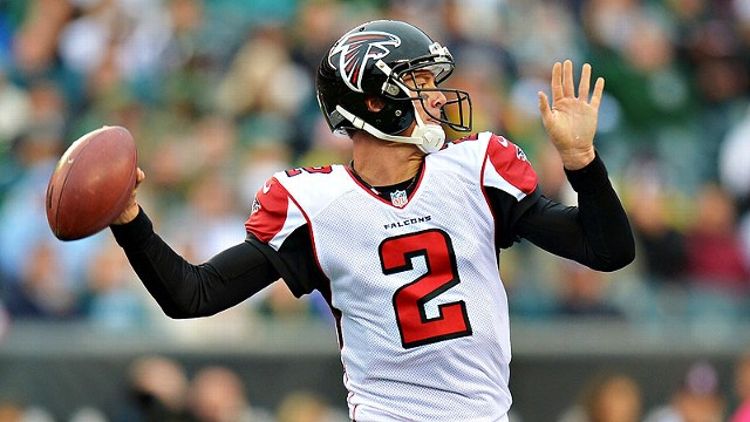 While it might seem like football just started yesterday, incredibly, we’re coming up on the halfway point of this NFL season this weekend. Week 9 is a good time to take a step back from the game-to-game grind and examine each team with a longer view — so that’s exactly what I’m going to do. Over the rest of the week at Grantland, I’ll be taking a look back at how some notable teams and players have performed over the first half while looking forward to how things might change during the final half of the season.

A natural place to start is with the league’s only undefeated team. The Atlanta Falcons have been popularly elected as the league’s best team, and while I don’t necessarily agree, it’s not difficult to make a case that the Falcons belong in that discussion. What I’m interested in finding out, though, is why this year’s Falcons are a step above the other Matt Ryan–era teams through the first seven games. If anything, the previous Ryan-led Falcons squads have been teams that got hot as the season went along: During their three double-digit win seasons, the Falcons were a combined 13-8 (61.9 percent) across their first seven games and 21-6 (77.8 percent) afterward. You can make anecdotal cases for what changed — the turnover at offensive coordinator, Ryan stepping up his game, Julio Jones taking a step forward in his sophomore campaign — but I’m looking for tangible differences in their play. What is it about the 7-0 Falcons that is different from the guys who showed up over the previous four years? And will it stick into the second half? And beyond?

As it turns out, it’s actually an improvement on the defensive side of the ball that’s helped drive this squad toward the league’s elite. A year ago, Atlanta ranked seventh in points scored, and this year, they’re fifth in points per game. Better, but not by much. On the other hand, last year’s Falcons team was a disappointing 18th in points allowed; this year’s unit lost star cornerback Brent Grimes as the season began, but they’re still an impressive seventh in points allowed per game.

Why have they gotten better? Start with field position. Through their first six games, Atlanta’s defense began games with the most generous average opening field position in all of football, with opposing offenses requiring nearly 77 yards to score a touchdown. Compare that to their opponents last Sunday. Before the loss to the Falcons, Philadelphia had the league’s second-worst average starting field position on defense, with the opposition needing less than 69 yards per drive to score. That’s close to one full first down per drive.

That additional breathing room would cover for the Falcons if they struggled to avoid allowing first downs, but Atlanta’s developed a propensity for getting off the field quickly and reliably. For the first four years that Michael Smith was Atlanta’s head coach, the Falcons were downright ugly on third down. In situations where they were either leading or trailing by 14 points or less (a split I’m choosing because it avoids blowout situations, and one I’m using in the per-play analyses below unless mentioned otherwise), the Falcons allowed the opposition to cruise down the field, giving up first downs on 42.8 percent of third-down opportunities, good for the fourth-worst rate in football. This year, through their full seven-game slate, the Falcons have apparently decided that their largesse is simply not worth it. Atlanta has only allowed opposing offenses to pick up first downs on 35.0 percent of their third-down attempts, which is the sixth-best rate in the league. (Secretly the best: Miami, which has allowed conversions a mere 26.7 percent of the time.) That’s not because of the distance, either; during both 2008-11 and the 2012 season, Atlanta’s distance to go on defensive third downs has been just about league-average. Asante Samuel & Co. simply have more space to get off the field, and do so far more frequently than they used to. That’s a recipe for dramatic defensive improvement.

On the offensive side of the ball, Atlanta’s improvements are more stylistic than statistically meaningful. In two-score games, their average yards per play on first down are up from 5.5 in 2008-11 (which was 22nd in the league) to 5.9 (11th) this season. They average 6.4 yards to go and pick up 49.4 percent of their third downs, the third-highest rate in the league, but that’s nothing new; from 2008-11, they averaged 6.7 yards to go on third down and picked up 45.3 percent of them, which was the fifth-highest rate in football. So they’re better on first and third downs this year, but not to the point where it’s redefining Atlanta’s offense. Instead, it’s clear that the team has put its faith in Ryan over Michael Turner and the power running game. From 2008-11, Ryan threw the ball on just 41 percent of his team’s first-and-10 two-score situations. In 2012, that figure is all the way up to 56 percent.

For whatever impact those changes have had, there’s a larger context here: Namely, that the Falcons have picked up an easy schedule for the first time since Ryan arrived in town. Pro-Football-Reference.com notes that Atlanta has played the easiest schedule of any team in the NFC, partially thanks to their four-game excursion against the AFC West. Even more exciting for Falcons fans is that the schedule really doesn’t get much tougher from this point forward. Over the next nine games, Atlanta only plays a team that currently possesses a winning record once, and that belongs to the Giants in Week 15. If you change the criterion to positive point differential, the only other team that pops into the equation are the 3-4 Buccaneers.

And, naturally, I’ve got some lucky numbers to bring up. Atlanta’s done a great job of avoiding fumbles on offense so far, with just four to their name through seven games. They’ve recovered three of them — and with the defense nabbing seven of 11 fumbles that have hit the ground in their games, Atlanta’s 10-for-15 on fumble recoveries. While it’s obvious that they haven’t lost a game decided by one score or less so far, winning four of seven by seven points or fewer is pretty rare. It’s only happened to two 7-0 teams since 1990, and those teams — the 1990 49ers and 2003 Chiefs — went 13-5 the rest of the way, winning seven of their nine one-touchdown-or-less tilts in the process. In fact, when you look at the 19 teams that have started 7-0 over that time frame, they proceeded to go 115-47 over the remaining nine games of their respective years, winning nearly 75 percent of their close games. That’s still not quite as good as winning 100 percent of your one-touchdown games, but it’s certainly good enough to get by. In reality, though, a bad break in the narrow victories over Carolina or Denver would have been enough to turn a 7-0 team into a 5-2 one.

After looking over the numbers, I think 5-2 or 6-1 is a more accurate measure of how Atlanta’s really played over the first seven weeks of the season. For all the great work they did in dominating Andy Reid, Michael Vick, and the Eagles on Sunday, they were coming off of three squeakers that saw them win by a combined 12 points. I think the Falcons can sustain a lot of their new performance going forward, especially if they stay healthy and continue to operate against an easy schedule. But I don’t think they’re the best team in the NFC, and even with the easy schedule, I don’t think they’ll be undefeated all that much longer.