Is This Real? Can the Saints Make the Playoffs? 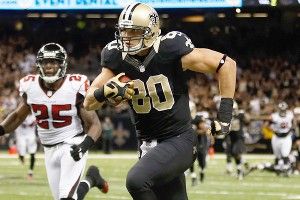 For the Saints and their fans, a season that seemed dead on arrival after an 0-4 start has sprung back to life. New Orleans has gone on a 4-1 run since that dreadful start, highlighted by last Sunday’s Mercury Morris–enabling win over the previously undefeated Falcons. At 4-5, Saints supporters who had likely thought about possible vacation destinations for an otherwise-meaningless winter are now beginning to whisper a word that would have been unfathomable at the end of September: playoffs.

Can the Saints do it? Is this 4-1 team the “real” Saints as opposed to the guys who started 0-4? And why have they suddenly gotten better? They’re all questions worth asking and ones I’ll attempt to answer.

When I wrote about the Saints after their 0-4 start, I noted that New Orleans really hadn’t played terrible football. Over that four-game stretch, the Saints were outscored by a total of 20 points. That’s the Pythagorean expectation for a team that will win about 6.5 games over an average season, which is well below the standards set by Drew Brees & Co. in the Bayou, but a damn sight better than the zero-win pace they were on. The Saints were 0-2 in games decided by a score or less, and their other two losses had each been by eight points (which I don’t count as one-touchdown games for purposes of comparing them to close games before the two-point era, an arbitrary rule I should probably change). While you could argue that the Redskins outplayed the Saints by a margin larger than the final score indicated, it was pretty clear that the Saints were playing mediocre football, not abysmal, last-place football.

That change in luck has since shown up. The Saints have played three games that were decided by a touchdown or less since that 0-4 start, and they’ve won all three of them. Over their five-game comeback stretch, they’ve only outscored the opposition by a total of 13 points, suggesting that their new level of performance is that of a team who would win 8.9 games per 16. That gap says a lot more about New Orleans’s true level of talent and execution than their win-loss record shift does to me: These Saints are definitely playing better than they did during the opening month, but the September Saints were better than their 0-4 record, and the Subsequent Saints are a little worse than 4-1. In all, they’ve been outscored by seven points across their nine games this year, producing a Pythagorean expectation commensurate with that of a 7.7-win team. That sounds about right for New Orleans’s overall level of play through nine games.

Although their defense took most of the heat for a rough early patch, it hasn’t gotten better in concert with the drastic improvement in New Orleans’s record. Through four weeks, the Saints defense ranked 28th in DVOA; now, through nine games, New Orleans’s defense is 30th in terms of Football Outsiders’s core statistic. Their overall DVOA rating has improved from 21st to 16th, a five-spot improvement that coincides with the rise of their offensive DVOA from 11th to sixth. Malcolm Jenkins’s desperate sprint to save a Vincent Jackson touchdown might end up being the symbol of the comeback Saints, but the fact that his defense was in the middle of allowing a 95-plus-yard catch-and-run says a lot more about how the defense has played this year. Outside of a seven-sack performance against the hapless offensive line of the Eagles, New Orleans has averaged less than two sacks per game. They’ve allowed more yards and first downs than anybody else in football, and they’re next-to-last in rushing yards, passing yards, and average yards per attempt allowed. One play just isn’t enough to make up for all that.

The good news, then, is that New Orleans’s chances of making the playoffs are at a seasonal high! The bad news is that their chances still aren’t very great. I went through the 2002-11 seasons (those with the current playoff setup) and tracked whether NFL teams with each given record over a particular number of games made the playoffs. For example, as you might suspect, the 0-4 Saints did not appear to have a very strong shot of making the playoffs. Thirty-six teams over that time frame started 0-4, and not one of them made it into the postseason. Since then, their odds have gotten better, but they’re still a 10-to-1 long shot by this simple metric. Here’s how their chances have looked from week to week:

That 10.3 percent figure might even be generous. Football Outsiders does a more intensive look at each team’s playoffs odds on a week-to-week basis and suggests that the Saints have a mere 4.8 percent chance of making the playoffs.

While those low figures have something to do with New Orleans’s talent level, it has more to do with the situation they find themselves in after their rough start. Even after beating the Falcons, they’re four games back in the NFC South with seven games to play, and they still trail the Buccaneers. The Saints do hold the tiebreaker over both teams and would almost certainly need to sweep the Falcons and Bucs in the second half of their respective home-and-home series to make it into the playoffs, but it’s just difficult to make up that much ground in such a short period of time. In addition, keep in mind that no 8-1 team has missed the playoffs since at least 1990; the last team that good to miss the playoffs might be the 1967 Colts, who started 11-0-2 before losing a division-deciding matchup to the Rams in the final week of the regular season and thereby missing the playoffs.

If the Saints want to qualify through the wild card, their path is almost as tough. There are currently four teams with better records than the Saints competing for those two spots, and the Saints, Cowboys, and Cardinals are each tied with New Orleans at 4-5. If the Saints were in the AFC, for example, they would be tied for the best record of any team outside the six playoff spots at the moment. They also face a difficult schedule over the final seven weeks of the season; after traveling to Oakland this weekend, the Saints play the 49ers at home, embark on a road trip to see the Falcons and Giants, and then sandwich a trip to play the Cowboys in Dallas between home games against the Bucs and Panthers. That Panthers game represents the only friendly matchup on the calendar, and it doesn’t occur until Week 17.

After going under the hood and looking at the numbers, I just don’t see a strong likelihood that the Saints will be able to finish the season on an enormous winning streak and work their way into the playoffs. The schedule’s too tough, and if you take a broader view of how they’ve played, the performance doesn’t appear to be there, either. New Orleans will be back in the playoffs soon, but they’re not going to overcome those 10-to-1 odds and make it into this year’s dance.

About the Previous Evening: Lakers Lose, Spartans Win, and All the Marlins Get Traded