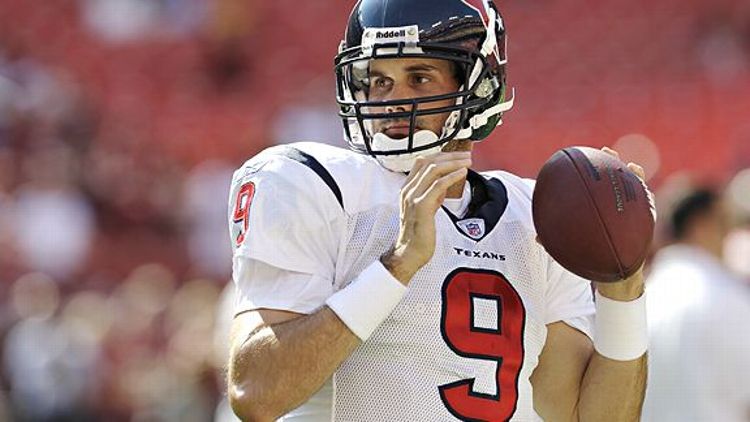 I didn’t want to start this blog post with the phrase “Houston, we have a problem.” But the Texans are facing a serious crisis — starting quarterback Matt Schaub is out for the season with a Lisfranc injury. Replacing him as the starter is habitual hot-tubber and colossal draft bust Matt Leinart, who quietly signed and then re-signed with the Texans last year after being cut by the Arizona Cardinals in training camp.

So, they’re doomed, right? Well, hold on. The narrative surrounding Leinart’s flop coming out of USC has holes you can drive a truck through. And we’re behind the wheel.

When Leinart was selected out of USC by the Cardinals with the 10th pick of the 2006 NFL draft, there were plenty of reasons to think that he would succeed as a pro quarterback. The Lewin Career Forecast saw a quarterback who started 39 games in college while completing about 65 percent of his passes and projected him to be a star. While the Forecast has struggled in applying with smaller quarterbacks who played in spread offenses at school (like Brian Brohm and Kevin Kolb — so apparently, also quarterbacks with alliterative names), Leinart was a tall quarterback coming off of a three-year stretch as the starter in a pro-style offense. There are no “can’t miss” prospects, but Leinart seemed awful close to being one.

The Cardinals drafted Leinart to be their quarterback of the future, despite having a 34-year-old Kurt Warner on the roster. Warner, who had played well for the 2004 Giants before being removed from the lineup for a rookie Eli Manning, had to beat out Josh McCown for the Cardinals job during the 2005 season. In 2006, head coach and famed talent evaluator Dennis Green benched Warner after the Cardinals’ fourth game of the season, throwing Leinart into the fire. You will probably remember his second start: It was the now-famous “They are who we thought they were!” Monday Night Football game against the undefeated Bears, when Leinart helped push Arizona into a 23-3 lead before the Bears returned two fumbles for touchdowns and got a Devin Hester punt return for a touchdown to seal an incredible 24-23 comeback.

Leinart finished the year with respectable numbers for a rookie, completing 56.8 percent of his passes and throwing 11 touchdowns against 12 interceptions in 11 starts. After the year, the team fired Green and named Ken Whisenhunt as its coach. Leinart started the 2007 season as the team’s starting quarterback with shaky numbers — 60-of-112 for 647 yards with two touchdowns and four picks — and Whisenhunt temporarily benched him for Warner. The situation resolved itself when Leinart broke his collarbone and missed the remainder of the season. In his stead, Warner was unsurprisingly brilliant, completing 62.3 percent of his passes and averaging 7.6 yards per attempt.

In 2008, the situation came to a head in training camp. When faced with a decision between a Hall of Fame quarterback and a developing young one, Whisenhunt made the only wise decision he’s ever made with quarterbacks: He chose the Hall of Famer. Warner promptly had an MVP-caliber year and led the Cardinals to the Super Bowl, which left the team with no debate heading into the 2009 season. Over the two-year stretch, Leinart threw 106 passes and completed 62.3 percent of them, but did throw four picks. Then again, that’s also a small sample; plenty of quarterbacks throw four picks over 106 passes and are otherwise great. The statistics, for better or worse, mean nothing over that stretch.

When Warner retired after the 2009 season, Leinart was seen as the starter-in-waiting. The team brought in former Browns colossus Derek Anderson to compete, even as Anderson was coming off of a season in which he completed just 44.5 percent of his passes and threw an interception every 18 passes. Over his four-year career in Cleveland, he had completed 52.9 percent of his passes and thrown 46 touchdowns against 45 picks. In other words, Anderson was about as mediocre as Leinart was during his rookie season.

Despite all that, Whisenhunt preferred Anderson, and cut the former first-round pick. Anderson was arguably the worst opening-day starter in football, and the team bounced between him and rookies Max Hall and John Skelton throughout the season. Each rated among the worst quarterbacks in football. The following year, Whisenhunt traded for Kevin Kolb. Kolb was, not coincidentally, one of the worst quarterbacks in football this season before suffering an injury. Whisenhunt is the primary reason Matt Leinart is considered a bust, and over the course of his career as Cardinals coach, Whisenhunt has shown virtually no ability to pick the right starting quarterback for his team.

It’s wrong to say that Leinart was a bust, but he is unproven. He’s basically been stagnant for the past five years, if he hasn’t regressed from a lack of confidence and regular playing time. But even if Leinart is a below-average quarterback at the NFL level, how bad can he really be? Leinart will be in an offense with arguably the league’s best rushing attack, a dominant offensive line, and he’ll have Andre Johnson and Owen Daniels to throw to. Over the next six weeks, he gets to face two tough pass defenses (Jacksonville and Tennessee), but he’ll also get the very friendly secondaries of Atlanta, Carolina, and Indianapolis, and he’ll play a Cincinnati team that just lost star cornerback Leon Hall for the season. Even if Leinart isn’t very good, his schedule and the players around him are going to make him look like he is.

The reality is, Leinart will probably be a much better player than his narrative suggests. The bust label implies Leinart was fairly evaluated by a competent coaching staff. That doesn’t appear to be the case. Leinart might not be Schaub, and he might not ever end up becoming the player that everyone expected him to be coming out of USC, but he can be a viable starting quarterback on a playoff team.

Previously from Bill Barnwell:
This Game of Inches
Ultimate Fighting Is Ready for Its Close-Up
The All-Bettis Team
NFL Midseason Report: The NFC
NFL Midseason Report: The AFC
Vegas Sportsbook Review: Caesars Palace
Breaking Down the Suck for Luck Campaign
Handicapping the 2011 NFL MVP Race
The Hedge, the Tease, and the Life of the NFL Bettor
Debunking the Tim Tebow Myth